Vietnam is located in Southeast Asia and borders China in the North and, therefore, has heavily experienced the influence of Confucianism and Taoism from China and the influence of Buddhism from both China and India. Under successive dynasties, these religions were gradually Vietnam zed.

In general, in the long process of history, all three religions have coexisted and interacted with one another. As they deeply pervaded the life of the Vietnamese people, they led to the development of religious architectural works in various parts of the country, from rural areas to cities and towns (pagodas, temples, temples of literature, shrines, stupas, etc.) and also exerted a certain influence on the architecture of dwelling houses. The 15th and 16th. centuries saw the arrival of Christianity and the subsequent emergence of Catholic churches in some areas. In 1926, a new religion, Cao Dai, made its appearance in Tay Ninh province. It’s few temples have a bizarre architectural style.

This doctrine was worked out by Confucius at the end of the 6th. century BC, a philosophy having ethical, religious, and political characters. It played a dominant role in China and a number of Asian countries. It was spread to Vietnam by the 2nd century BC, exerted a strong influence, from the 11th to the 14th century, on the circle of Vietnamese intellectuals and mandarins, and became the ruling ideology from the later Le dynasty on (15th century). 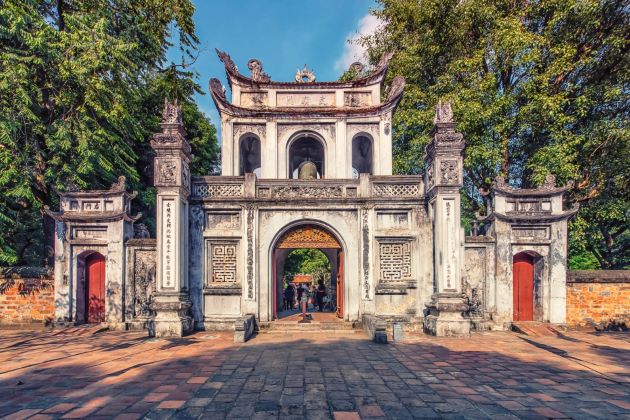 Thus, a large part of the Vietnamese feudal elite subscribed to the Confucian doctrine, particularly its principle “three submissions” (the subject must submit to the King, the child to the father, and the wife to the husband), which later became the credo of both the elite and commoners. In many pagodas and temples, in addition to the statues of Buddha, of other deities, and national heroes, there may be also statues of Confucius and altars dedicated to him. The Temple of Literature and the Pen-brush Tower in Hanoi symbolize the Vietnamese people’s admiration for Confucianism.

Lao Tzu, the founder of Taoism was a contemporary of Confucius, Taoism was introduced into Vietnam during the period of Chinese rule and gained strong influence during the reign of King Dinh Tien Hoang (10th century) and was treated on an equal footing with Buddhism and Confucianism during the Ly dynasty (11-13th centuries). But from the later Le dynasty (15th century), it lost ground to Buddhism and Confucianism. Taoism in Vietnam comprises two main theories:

– “Dao” (way, doctrine) is above everything. It came into existence before the earth and heaven. It is a void; it stands quiet and still, not changing, yet moving everywhere and endlessly. It is a mystical principle that is colorless and shapeless, which has given birth to “Am – Duong” (Yin: the negative principle, female; Yang the positive, male), to the earth, heaven, and all creatures and things.

– ”Vo vi” concept (inaction). Men must live in accordance with the Vo Vi principle: Inaction, no setback, no grudge, nothingness. When humans attain the Vo Vi ideal, they will be free from struggles and competition. 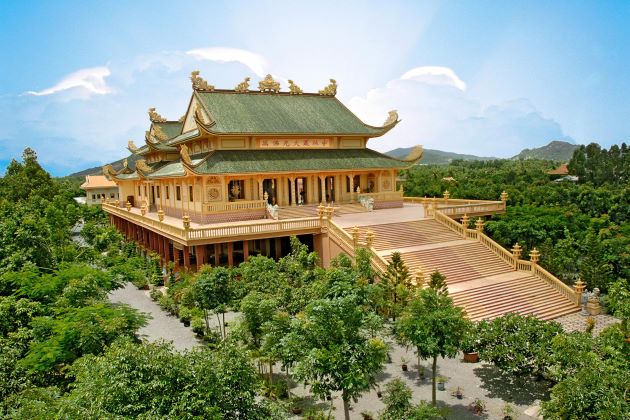 Any Vietnamese Confucian scholars who were influenced by the Taoist doctrine usually did not attach great importance to honor and wealth, valuing only leisure and freedom. The common people who had little grasp of the profound significance of Taoism were rather fascinated by its mystical, superstitious aspects, involving deities, sorcery, amulets, invocations, and going into trances. This has resulted in various temples and various practices associated with Taoist superstitions.

Buddhism, which came into being at the end of the 6th century BC in North India (bordering on Nepal), is based on the life and teachings of Sakyamuni. At the beginning of this era, Buddhism came from India to Viet Nam. Luy Lau (Thuan Thanh, Bac Ninh province) was one of the earliest Buddhist centers in East Asia. During the same period, Buddhism also came to Vietnam via China. 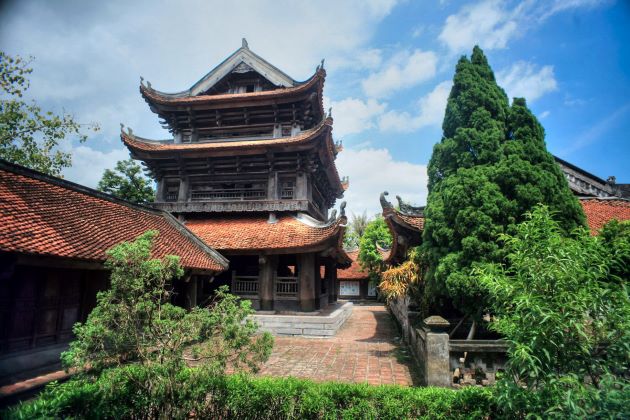 From the 10th century, Vietnam became an independent state and these two Buddhist sects made important contributions to our nation-building process and rapidly grew in influence. In the 11th century, the Thao Duong (Cao Tang) sect made its way into Vietnam via Champa. By the 13th century, all 3 sects gradually merged and King Tran Nhan Tong, who had abdicated, set up a Vietnamese school of Buddhist Dzen. In the 15th century, Vietnam was invaded and ruled by the Chinese Ming. This period also witnessed the decline of Buddhism.

The Le dynasty, which drove out the Ming invaders, set about building up a centralized monarchy. As a result, Confucianism became the ruling ideology, and the position of Buddhism was further weakened. From the 16th century, the Trinh and Nguyen Lords partitioned Vietnam and, for the sake of winning the allegiance of the people, both tried to promote Buddhism. As a result, Buddhism increased its influence among the population as evidenced by the widespread presence of Buddhist pagodas, large and small.

In short, the development of Confucianism, Taoism, and Buddhism in Vietnam led to the construction of pagodas, shrines, and temples. Moved by religious fervor, the devotees and the population pooled material resources, human power, and skills in constructing these worship centers, many of which, like Keo Pagoda, Thay Pagoda, and Tay Phuong pagoda, constitute valuable assets of traditional Vietnamese architecture. Also, religious beliefs affected the space composition, internal and external, of the dwelling houses of the population, their component parts, and decorative elements. In addition to these 3 religions, Christianity also exerted a substantial impact on the spiritual life of the Vietnamese people.

The first attempt to spread the Christian gospel in Vietnam started in the middle of the 14th century when missionary Francois Xavier landed in Thanh Hoa province. In 1533 another attempt was made in Nam Dinh province, in spite of the edict by King Le Thanh Tong prohibiting Christianity. By the end of the 16th century, two missionaries, Louis de Fonceca, Portuguese, and Gregoire de Motte, a Frenchman, preached the gospel in Quang Ninh province. The diffusion of Christianity was further stepped up from the 17th century by missionary Alexandre de Rhode. The feudal rulers of Vietnam again prohibited Christianity in the 18th century, and more rigorous measures were taken in this regard during the reigns of Emperors Ming Mang and Tu Duc in the 19th century. After the establishment of French rule in Vietnam, Christianity could develop favorably, with a rapid increase in local followers and the building of Catholic churches in the cities and in various rural areas. 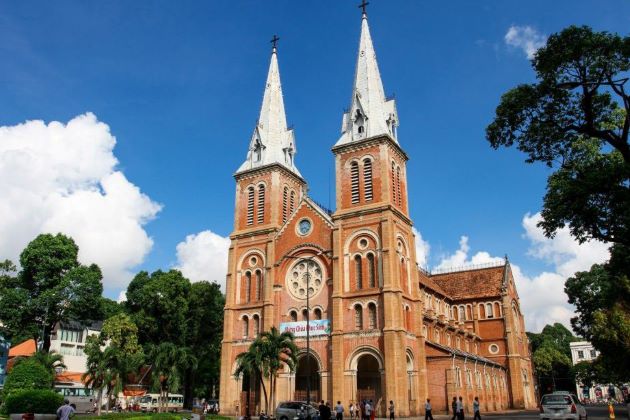 As Christianity preaches altruism and fraternity, its followers pledged to devote themselves to the betterment of society. To this end, they were engaged in such social work as setting up orphanages, providing relief to the old and sick, establishing schools, etc.

The architecture of Catholic churches in Vietnam was, with the exception of the Church in Phat Diem, heavily influenced by the Gothic and Roman styles from the West, as they were the replicas of European churches from where missionaries came. And in constructing these churches, Vietnamese builders were exposed to the technique and experience relating to architectural projects which involve a large space that can contain a big number of people. The architectural forms of the churches also further enriched the architectural art of Vietnam.