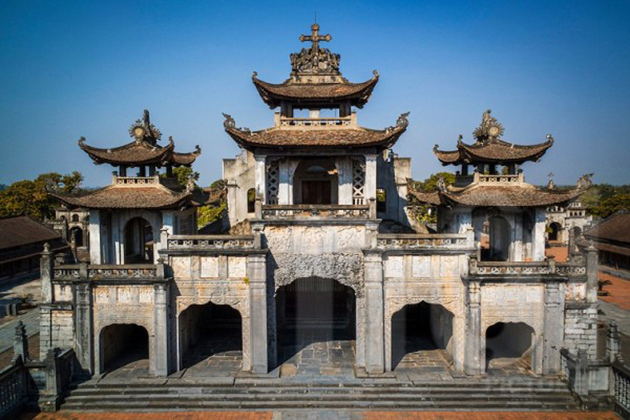 Traditional Vietnamese architecture involves wooden structures and steep roofs. Both large and small buildings have an odd number of compartments (l, 3, 5, 7, 9, 11) with sets of beams and rafters; the depth of the interior of the house is determined by the number of columns in each compartment. The wooden beams, rafters, tenons and mortises, and other components constitute a solid framework which supports the roof. The house may have a wooden wall or a wall of uncoated bricks with curved upward coats of mortar in-between the bricks. The wall must be linked to the system of outer columns; the brick wall must be constructed so as to surround the frame system, playing a protective and load-bearing role. The whole house stands on the floor foundation (with a system of stone bases that support the columns).

The ancient steep roof is curved at four ends, and its edges are decorated with high relief motifs. Both the gables of the house are decorated. As a result, the roof looks quite light in spite of its large size.

Over time, the wooden frame has experienced gradual changes, going from super-posed ties, gong-hanger ties to arm-shaped ties, from front ties and back shorter ties with (or without) cross-struts to ties provided with multi-tiered horizontal consoles for supporting the roof, from rough and heavy to slender and light beams and ties. 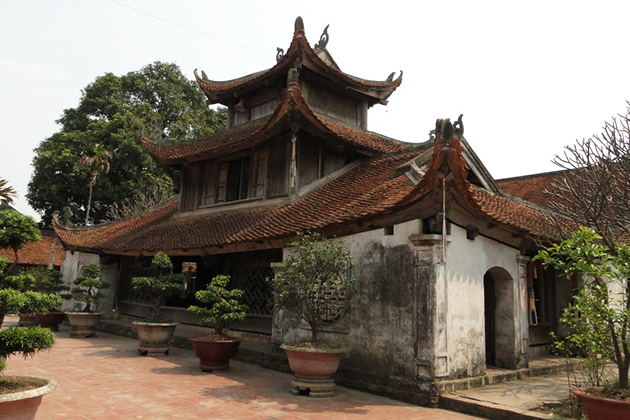 The big roof curving at four angles has gradually replaced by a straight roof which looks a bit curved due to the effect of the edge of the roof and has two layers with space in-between them (co diem).

Formerly, the roof of the house was covered with “fish scale” “dragon scale” or tube tiles; baked or enameled colored tiles. Each building usually comprised an interior space (which was closed) and a verandah space (half-closed); at first, there was only one interior space for one house, but later the interior space of two houses could be linked thanks to a complimentary roof.

Vietnamese traditional wood architecture originated from the house on stilts dating back to the time of the Dong Son culture (3rd century Be). Nowadays, wooden houses on stilts are still seen in the highlands and midlands inhabited by the Tay, Nung, Thai, Muong, Ede, and Bahnar. Certainly, the house on stilts of these ethnic groups may differ with regard to the layout, structure of beams and rafters, and other components.

One-story houses are the most representative of Vietnamese traditional wood architecture. However, constructions of two stories and more are also seen (the bell tower of Keo Pagoda in Thai Binh province) the bell and drum towers of Thay Pagoda in Ha Tay province, Hien Lam pavilions in Hue, and so on. The number of compartments of a multi-story building usually decreases as the building grows in height. For example, Hien Lam pavilion has five compartments on the first floor, but three compartments on the second and only one compartment on the third floor. Such a house also has one main column bolstering all the stories. All the wooden components of the house are linked closely to one another by means of tenons and mortises. 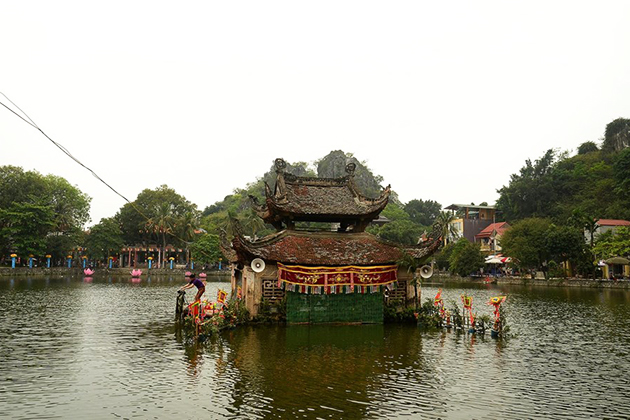 The Composition of the Floor Space in Vietnamese Architecture

All buildings must follow the principle of symmetry and balance, a principle which originated from primitive religious beliefs. Specifically, each house as a basic unit, having an odd number of rooms. The floor space of the house resembles a certain geometrical figure rectangle, square, hexagon, octagon and the following Chinese characters:

The letter “nhat” is the simplest and initial layout of houses. In other more complex arrangements, there is an internal courtyard for the sake of ventilation and more light. Individual houses are brought together to form a large architectural group. This floor space composition based on the wood structure is also found in several other Asian countries, such as China, Japan, Korea.

The Outlook of Vietnamese Traditional Architectural

the roof must be curved at its ends. The bigger the house, the higher the roof, as seen in communal houses. The edges of the roof are decorated. The roof stretches beyond the wall and the verandah of the house.

The wall has an evenly-arranged set of columns, and in-between the columns are doors (simple doors, artistically structured and decorated doors).

The Floor (including outer staircases) on which the house is based; it may be high or low depending on the type of house and the terrain.

In general, traditional Vietnamese architecture involves well-proportioned buildings of average size, some of them have attained a high degree of perfection (“Golden proportion”), such as the Ngo Mon (the Noon Gate) in Hue. 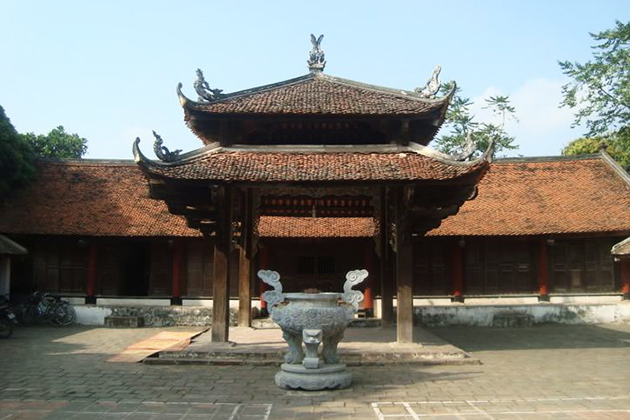 The floor foundation (including the outer staircases) and the courtyard can be covered with stone or baked bricks with flower patterns.

The outer three-level stairs of big houses and monuments have stone balustrades, as in the case of But Thap pagoda. The ends of the support pillars of the balustrades have the form of a non-blooming lotus flower, and in- between them are sculptured stone panels, while various parts of the balusters are linked to the supporting pillars by tendons and mortises. The design of the balustrade reflects Chinese influence. 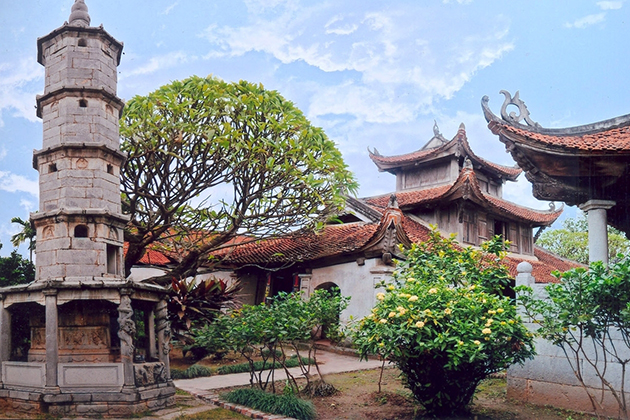 Some doors are simple; others are profusely decorated and their wooden faces are divided into proportionate parts, the lower ones being opaque and the upper ones airy and transparent, thanks to round or flat balusters or perforated, sculptured panels. Such perforated sculptured panels can be seen in the form of screens in the central halls of pagodas and communal houses, etc.

Columns, beams, and rafters: the round columns are lozenge-shaped at the top and in the middle and cylindrical at the lower parts, each column is usually made from one single trunk (not assembled as in China) and have a good proportion (see drawings). They are either plain, polished or are painted red and gilded with decorations of dragon motifs (particularly in the case of pagodas, temples, and palaces).

In traditional architecture, decorations are usually focused on the space below the roof, and particularly the main compartment located in the central part of the house. 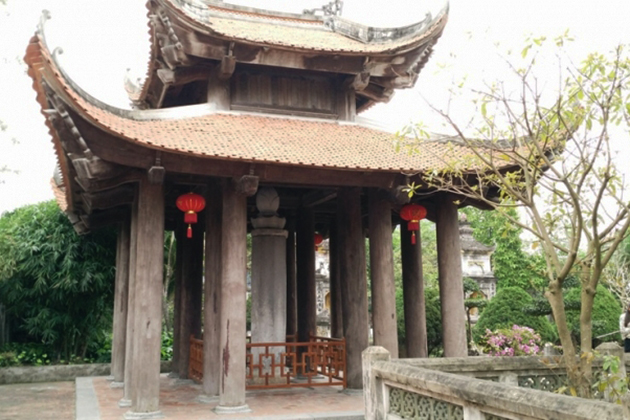 The roof is curved on four comers and horizontal cross-sections show the roof as straight (the cross-section would show that Chinese roofs are not straight but curved).

With respect to ancient Vietnamese buildings, vertical cross-sections show that the compartments are slightly curved on both sides in order to be in harmony with the roof comers. The ridge of the roof is decorated with horizontal flute relief’s and in the middle, with perforated ceramic bricks. Also in the central part of the roof ridge are two built-in dragons flanking the moon or two fishes transformed into dragons flanking a gourd of liquor, etc. Both outer ends of the roof ridge are strengthened with two small structures with decorative motifs. The roof of the house of common people is decorated with a small peck.

In terms of colors, the traditional architecture uses indigenous paints to protect the wooden parts against humidity and termites; yellow-red is the dominant color with red as the background, which helps to bring out the gilded decorations.

Traditional architecture has rich decorative motifs, such as stylized lotus flowers, chrysanthemum flowers, dragons and phoenixes, clouds and water waves, fairies, musicians, or ordinary life scenes, Buddhist images of “being and non-being”, stylized Chinese characters “van” (myriad), “phuc” (happiness), “loc” (luck), “tho” (longevity). For example, Tay Phuong pagoda has some round windows with the symbolic Buddhist image of “being and non-being”. Other pagodas have wooden window frames in the form of a Chinese character. 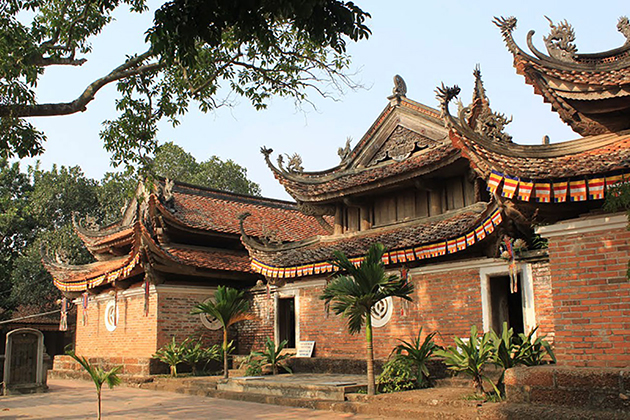 Traditional Vietnamese architecture is well integrated into the natural setting such as mountains and hills, rivers, ponds, lakes, trees. As a result, the architectural structure adds beauty to the surrounding scenery, while the setting also helps to enhance the value and charm of the building. In places where some elements of the necessary natural scenery are wanting, human beings create artificial lakes, mountains or plant trees, as in the case of the tombs of Emperor Minh Mang and Tu Duc. The selection of sites with the necessary natural setting or creation of elements that are found wanting is closely related to the ancient Chinese principle of “feng shui” (geomancy). 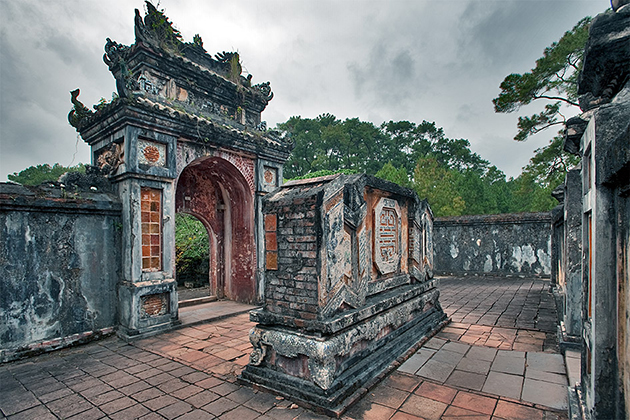 Inside the traditional constructions in Vietnam, most of the furniture is made from wooden, stone, and bronze. Their advantages are durable which can be used for years as well as its pristine beauty which is harmony with other parts of the house. Today, iron hairpin legs are widely used in interior design thanks to its durability and luxury looks. View more 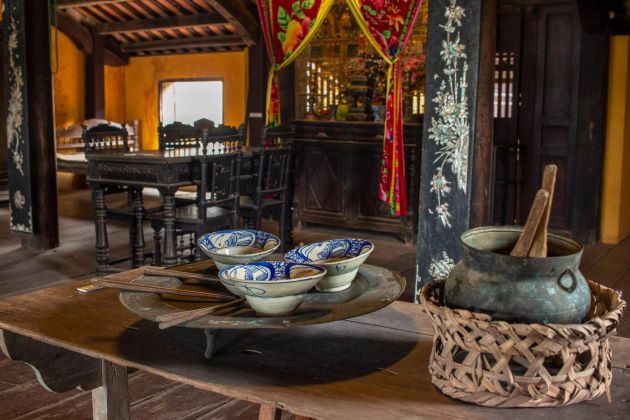