Have you ever noticed that what an ancient complex used as the symbol of Hanoi as well as printed on one side of the 100,000 VND note? The answer is the Temple of Literature – Vietnam’s oldest Imperial Academy under the feudal courts and the first national university. The temple was built in dedication to Confucian philosophy and still holds a spiritual significance to each generation of students and educators in Vietnam at present. 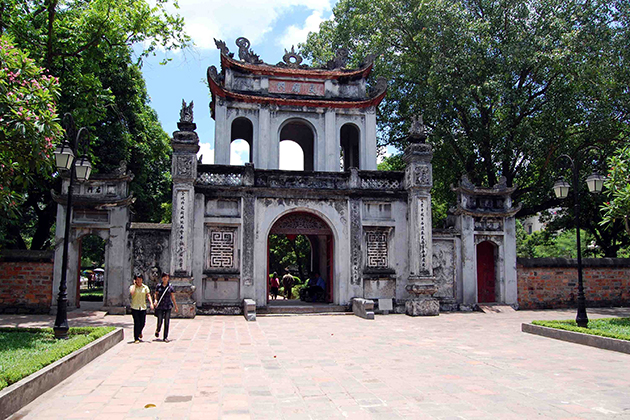 History of Temple of Literature

The temple was first built in 1070 in the Ly dynasty the reconstructed during 1225 – 1400 under the command of Tran Kings. Having strongly stood through centuries of wars, disasters, and major restorations, the temple still maintains its solemnly ancient look reflecting the architectural styles of various feudal dynasties and histories.

In 1070, according to the order of King Ly Thai Tong, the Temple of Literature was designed and built. The royal engineers had directed to place the statues of Confucius and his four famous disciples: Yan Hui, Zengzi, Zisi, and Mencius inside the structure. Besides, the picture featuring the Duke of Zhou was carved and 72 other Confucian scholars were painted. Temple was also where the Heir Apparent of the Imperial Throne and other princes studied.

In 1076, the Imperial Academy, Vietnam’s first university was established within the Temple of Literature to be the place of education for the kingdom’s royalty, nobles, and members of the elite class. However, in 1802, King Gia Long moved the capital to Hue and a new royal academy was placed. The Temple of Literature was still an educational symbol, but failed in prominence and became a district school. 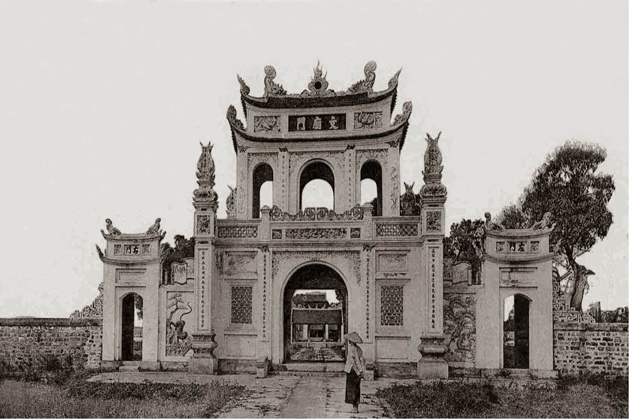 In the period of the French colony, the Temple of Literature was recognized as a Historic Monument and put under restoration. Now, all the architectures still remain at their stunning classic beauty and the Temple becomes a famous tourist attraction in Hanoi.

Sections in Temple of Literature

The Temple structure resembles the Temple of Qufu, Shandong, China, Confucius’s birthplace. The layout includes an area of 54000 square meters with the Literature Lake, the Giam Park, and the courtyards surrounded by a brick wall. Four giant pillars rest in the front of the Entrance Gate, on each side of the pillars, laid two steles requiring horsemen to dismount.

The gate then leads to three pathways further into the complex. The path in the middle was used by the monarch, which above it hangs a large bronze bell. The left path was reserved for the Administrative Mandarins and the right path was occupied by the Military Mandarins.

The first courtyard stretches over an area from the Great Portico to the Dai Trung (The Great Middle gate), which is halted by two minor gates: Dai Tai Mon (the Gate of Attained Talent) and Thanh Duc Mon (the Gate of Accomplished Virtue).

In the second courtyard lay a unique Vietnam architecture work since the 1805 and an emblem of present Hanoi – Khue Van Cac or the Pavilion of The Constellation of Literature. The Pavilion was built on four white stone stilts. On top of the stilts is a scarlet-painted house with two wooden circular windows and an elaborate roof. On two sides of the Khue Van Cac are the Suc Van Mon (Crystallization of Letters gate) and Bi Van Mon (Magnificence of Letters gate). As their name may suggest, those gates were designed to praise the beauty of literature in both its content and its form. A ray of topiaries representing the 12 Vietnamese zodiac animals run straight from the first to the second courtyard.

An outstanding feature of the third courtyard is the Thien Quang Tinh (Well of Heavenly Clarity). On either side of the well stands two great halls guarding the treasure of the temple.

In 1484, King Le Thanh Tong commanded the construction of 116 steles of turtles to honor talent and study.  In ancient Vietnam, the turtle represented wisdom and longevity.  Now, there are 82 steles remain. They were carved with the names and places of 1307 graduates in 82 triennial royal exams. Vietnamese believe that rubbing the turtles’ heads will bring luck and success to their academic path. The act has somehow become a tradition for each modern Vietnamese students going to the Temple praying for higher achievement in the upcoming important exams. Nevertheless, when realizing the stone has slowly been abraded, the Temple’s managers have placed a fence to prevent people from approaching the stone turtles.

Entrance to the fourth courtyard is accessible through the Dai Thanh Mon, with two smaller gates on each side: the Kim Thanh Mon (Golden Sound Gate) and Ngoc Chan Mon (Jade Vibration Gate).

Altars to Confucius and his disciples

Two halls stand on either side of the ceremonial fourth courtyard, in the center places The House of Ceremonies (Dai Bai Duong). The large building is the Thuong Dien (Sanctuary of Dai Thanh), where people come to worship Confucius and his four disciples. A sanctuary is a place of worship for ten honored philosophers.

In 1076, King Ly Nhan Tong instructed the addition of an imperial academy to the complex as the fifth courtyard. This was where the future literate mandarins studied.

The upper floor is to honor three kings who contributed to the construction of the Temple: Ly Thai Tong (1023–1072), founder of the Temple, Ly Nhan Tong (1066–1127), founder of the Imperial Academy, and Le Thanh Tong (1442–1497), who commanded the building of the turtle stone stele of doctor laureates.

Highlights of the Temple of Literature

The Temple of Literature is definitely a must-see for any tourist desiring to explore Hanoi’s ancient beauty and culture. Below are the reasons why a trip to Hanoi’s Quoc Tu Giam is worth spending.

In nowhere in Vietnam there is a place that holds such significant value of education, literature, and academics as it does in Quoc Tu Giam.  As Vietnam’s first university, the Temple has been chosen as Hanoi’s symbol of wisdom, talent, and study. One cannot explore the depth of Hanoi if skipping a visit to the very symbol of this thousand years old city.

Every year, before the university entrance exam – a milestone for each student in Vietnam – is conducted, there is a tradition that high-school students would come to Quoc Tu Giam praying for success in the exams.  Students often come to pay respect to the Confucian philosophers, speaking of their wish to pass the exam in flying color. It is also common for them to purchase lucky Norm script letters written by calligraphists. The letter can imply success, high mark, talent, achievement, or effort and is written in red silk paper or carved in a necklace’s pendant.

Behold the Beauty of Vietnamese Female Students in their Traditional Dress

The spring of each year is also the time for university students to prepare for their yearbook photo – a keeper of their memories with each other. Visiting the Temple of Literature in this time, tourists are expected to find many beautiful Vietnamese girls in the graceful traditional ao dai, which they do not dress usually today except on special occasions. Ao dai and Quoc Tu Giam – two symbols of Hanoi combine can draw such outstanding classic beauty. Temple of Literature is also an indispensable destination within any student tours as well as Vietnamese school trips.

Preserves the Writings of Nom Script

This is logographic writing used to write the Vietnamese language in ancient times. Now, the letter of Nom script was used for spiritual purposes only. In Vietnam New Year, Nom calligraphist masters often sit beside the gate of Quoc Tu Giam, writing Nom letters on a silk paper, making them look like a painting. People tend to purchase them to decorate their house as a symbol of fortune or present them as a gift to friends, implying that they pray for their friend a new year of success, too.

Special ceremonies are held in each season to honor Vietnam’s ancient scholars. Worshippers often dress gorgeously in ceremonial traditional clothes, dancing, chanting, and offering incense and fruits to the altar. Visitors should not leave their cameras at home, or else we could miss the chance to records the interesting rituals of the ceremony.

How to Get to the Temple of Literature

The Temple of Literature is located on the Van Mieu St, Dong Da District. The complex is 1km from Hoan Kiem Lake and 1.2 km from the Mausoleum of Ho Chi Minh. Most people travel to the Temple by bike, with the parking fee is 5000 Vietnamese dong per bike. However, there are also plenty of buses that offer a stop at the main entrance like the 02, 23, 32, 38, and 41.