From the 10th to the 14th century, Vietnam strengthened its national independence and built up a centralized feudal state. Ruling dynasties during this period were the Ngo, Dinh, Early Le, Ly, and Tran. Vietnamese culture (referred to as Dai Viet culture) was in full bloom during the Ly Dynasty and Tran Dynasty (11th – 14th century). 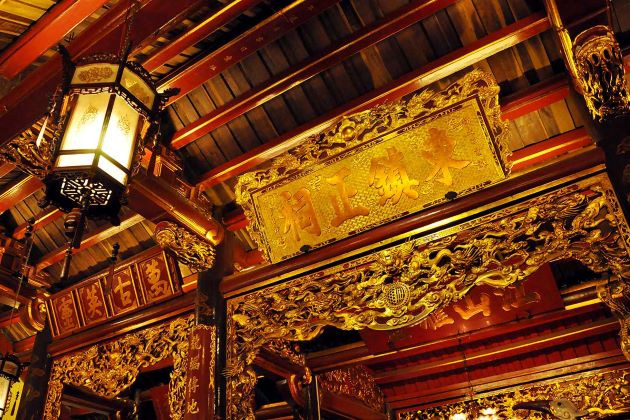 During this period, traditional Vietnamese architecture, whose style was retained in the course of over 1,000-year Chinese rule, developed to a new height, with the following characteristics:

a, Emergence of agricultural towns, where were located administrative, military, and trade centers, including citadels, ramparts, and markets, a kind of mixture of agricultural villages and handicraft guilds.

b, The presence of various structures such as royal citadels and ramparts, mandarins’ palaces, houses of scholars, peasants, and handicraftsmen. In particular, the construction of Buddhist pagodas and monuments was in full swing.

c, Royal constructions, and pagodas grew in scale considerably and thus looked more imposing, which testified to the prosperity of the country at the time.

d, The general architectural design, and composition of palaces and pagodas involved a combination of separate structures whose functions were clearly defamed. Each architectural complex was usually square in form, with buildings arranged symmetrically along an axis.

e, Houses on stilts and houses with ground floors and wooden frames continued to be built. Each house had several rooms, usually in an odd number, with superposed ties and a system of load-bearing columns, beams, and ties.

Most houses had only one story, while some palaces could have 2 or 3 stories and Buddhist stupas 9 to 12 stories. In general, the buildings were arranged lengthwise along an axis, one structure following another in a row, and were made adapted to the terrain and the hot and humid climate.

g, Let us take one structure, which has survived from this period, for analysis. Viewed from the outside, the most outstanding parts are the roof, the wall-columns, and the foundation: 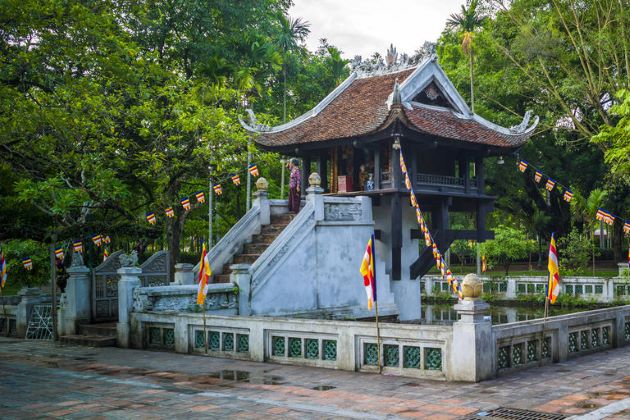 h, A high level of architectural art was attained. This is testified by One Pillar Pagoda (in Ha Noi), which evokes a stylized lotus. In addition to beautiful decorations, the architecture of pagodas is well blended with sculptural works as reflected in the wooden beams, doors, blinds and screens, the stone bases that support the columns, and the balustrades of terraces or outer stairs leading to the interior. Brick -tiled walls are also adorned with stylized images (dragons, flowers, and leaves). Colored ceramic tiles and bricks with carved images are often seen.

The Vietnam architecture of this period (11th – 14th century) laid the foundations for its further development during the subsequent periods – the Ho dynasty and the later Le dynasty (15th – 18th century).