The Kinh people or Viet people, the most predominant ethnic, accounts for 87% of the population in Vietnam. They live in most of the country such as the alluvial plains delta of Red River and Mekong River. The Kinh uses the official language of Vietnam, Vietnamese, as the main language. This language was created by Spanish missionaries in the second half of the 19th century. However, depending on the region, Vietnamese are pronounced and used in different ways by the Kinh making the diversity of language. In Vietnam society, the Kinh have been played a vital part in Vietnamese culture and tradition as well as developing the economy.

Economic Features of the Kinh People

For thousands of years, the Kinh have developed one of the greatest agricultural civilizations in Asia. Planting wet rice is the number one field in Vietnamese agriculture contributing to the second-largest rice exporting country all over the world for Vietnam. Compared with other ethnic groups, the Kinh people’s farming reached a higher level of efficiency. They have built a lot of dike systems and dug canals which help the farmers control water resources to have advantages in different fields of agriculture such as growing plants and sericulture. 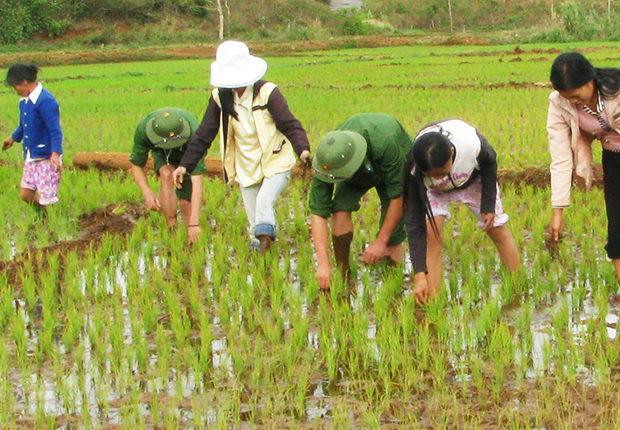 Besides, the Kinh people are good at raising cattle, poultry, fish, and catching seafood. In addition, pottery and handicraft production has been very developed and up to now well-known worldwide. Nowadays, in the market economy and international economic integration, the Vietnamese government also heavily invested fields of industry and services. The Kinh take the lead in the industrialization and modernization of Vietnam.

Traditionally, Kinh people, through thousands of generations, have lived together in harmony under the village. There exist some of their own rules in the villages and communes each that everyone must implement. Banian trees, wells, and roofs of the communal houses are familiar images of the village. In which, a communal house is a place for gathering and conducting common ritual ceremonies on worshiping Village Deity, who was considered as a village’s guardian deity.

Habits of chewing betel, thuoc lao (Vietnamese tobacco), drinking tea, and eating ordinary rice are the special cultural line in the living of ancient Viet people. The husband is traditionally played the role of the head in the family. Children were taken the family name of their father. The eldest son or the youngest son is often assigned to the most responsibility for the worship of dead parents and grandparents. This is up to who parents live with. Additionally, each family of the Kinh group lineage maintains a temple for their forefathers and the head of the family lineage handles all common affairs here. Kinh people always respect monogamy. They are very faithful to their wife/husband. Homosexual relationships are currently accepted by the government in Vietnam in 2015. Besides, the Kinh religions and beliefs are diverse including Buddhism, Confucianism, Taoism, Christianity, etc.

In general, among all ethnic groups in Vietnam, the Kinh has the most modern costume. They gained and influenced by Western fashion as well as the cultural wave of Korean fashion, Japanese, Chinese. They often update hot trends very fast. In spite of that, the position of Aodai is impossible to replace with The Kinh. Ao dai is the traditional costume of the Kinh and also regarded as the country’s traditional clothes in Vietnam.

In Ao dai, Vietnamese woman is discreet, decent. This image is not only loved by Vietnam but also created a deep impression with foreign tourists. Men used to wear a long gown with slits on the side either and a turban, meanwhile women worn “ao tu than” (four-panel traditional dress) with four slits divided equally on its lower section. Nevertheless, the Kinh people prefer to wear modern custom for active, convenient. They wear traditional costumes on special occasions.

The old man’s literary capital is quite large: has oral literature (the fairy, folk songs, proverbs), have written in the literature (poetry, immortalized, the books). The art of early development and achieving a high level of multifaceted: singing, music, sculpture, painting, dance, talk. The Kinh have still conserved a huge collection of literature which includes old tales, folk ballads, and proverbs, fairy tales, music, sculpture, painting, dance, and oratorio are also the owner of time-honored history.

The Kinh’s culinary has many similarities to Vietnamese cuisine which is richness and diversity with the processing, enjoying dishes natural characteristics, activities, production, and habits in different regions each. However, rice remained a key role in meals and sauces are indispensable components of every tray of a Vietnamese family.

The cuisine of the Kinh has different in each region dishes but there are similarities, harmony, and creating unified cuisine, unique. The beauty of a culinary culture that always needs to be stored and promoted forever to enriching the colorful picture of the ethnic groups of Vietnam.