Vietnam is a multiethnic country with 54 distinct groups and each with its own cultural heritage and specific styles of traditional clothes, dress, and costumes. Common traits often include splendid colors, seemingly contradicting one another in each outfit: black and red, blue and red, or blue and white.

The Ao Dai (Long silk tunic) has been the traditional dress for Vietnamese women a long time ago. After a period of a custom practiced, there are many different kinds of Ao Dai: the four-part flowing tunic had two equal front flaps that women tied together, while the five-part flowing tunic had an additional small flap that buttoned up onto the right side of the dress.

Each distinct region around Vietnam has its own style of flowing tunic. For instance, in the North, females usually wear the four-part (called Ao Tu Than in Vietnam) with a long skirt. Also, Ao Tu Than is well worn with a large hat made of leaves called Non Quai Thao. Nowadays, tourists can only see Vietnamese women in Ao Tu Than going along with Non Quai Thao in traditional musical performances such as Cheo and Tuong. Instead of Non Quai Thao, sometimes women just simply wear a scarf as a variety. In the past, this combination is for the female when going on the farm.

In the Central Region and in the South of Vietnam, Ao Dai is worn much like today. It is a long flowing tunic that consists of only two parts and it is worn over a loose-fitting pair of trousers. These pants are often in white, black, or colorfully dyed. The dress splits into a front and back panel from the waist down. The Ao Dai is said to “cover everything but hide nothing” since it promotes all the beautiful curves of a Vietnamese woman. You can see in your Vietnam school tour the student girls wearing Ao Dai as their uniform. 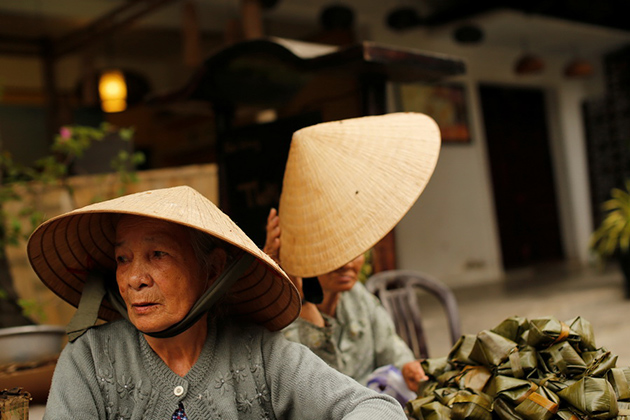 The cone-shaped hat is called “Non La”, which is used indeed like a hat to protect one from the heat of the sun, from the rain, or in everyday life situations. Also, conical palm hats are used as a decorative fashion item or a souvenir in Vietnam. They usually are known as a Non Bai Tho as people traditionally write poetry on it. Tourists can easily find conical palm hats everywhere in Vietnam but it is highly recommended for Hue Citadel – where the first Non Bai Tho was created and developed.

Ao Ba Ba is the typical clothing companion with the Mekong Delta women from long ago. This shirt makes people immediately think of the warm-hearted, natural, and tender beauty of rural women. Ao Ba Ba is a collarless shirt and the back is made of a piece of cloth, the front body consists of two pieces, in the middle, there are two straps running from the top down. Ao Ba Ba clings to the body and often combines with long black or white trousers to emphasize the beautiful curves of the Vietnamese women 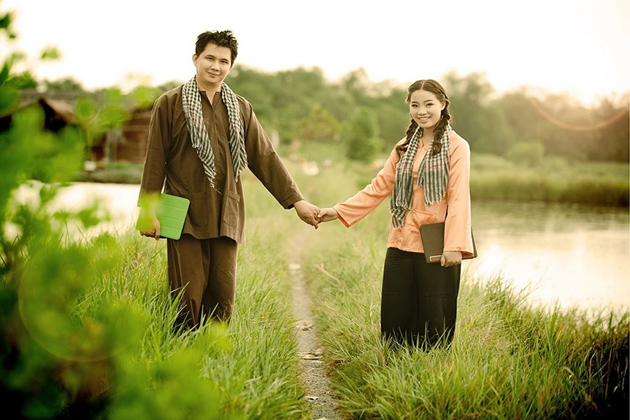 If you have seen the exquisite costumes – Ao Dai has worn by Vietnamese women, then you will effortlessly recognize the similarities in the traditional dress for the male. Both costumes are tailored from the same fabric, worn with the conventional snug collar and buttoned-down on the left side to the waist, and with no crease in front of back. There is a small difference that the male dress extends only to the knees (while for the female is up to over the ankles).

In the past especially in the feudal period, there are many variations for men due to his level in society. Gold is the national color and the dragon embroidery on the dress is a fabulous mythical animal, which represented for the King. Purple is the color reserved for high-ranking court mandarins while blue is for those at the lower rank. Nowadays, Western attire is the norm in Vietnam, but the traditional Ao Dai is still a symbol showing the beauty of Vietnamese culture and remains the style of choice for formal occasions such as weddings or the New Year celebrations. Therefore, you still have a chance to see Vietnamese men wear Ao Dai on the Tet holiday street in your Vietnam vacation.

In general, Vietnamese clothing is very diverse. Every ethnic group has its own unique dressing and the festival is the best occasion for them to wear all their favorite clothes. Over thousands of years, the traditional dress of all ethnic groups in Vietnam has changed a lot, but each of them has separately maintained their own characteristics.

Thai ethnic women’s dresses are quite elegant, which honors the tender beauty of the girls. Thai ethnic traditional costumes include a plain blouse and a long skirt, which was embroidered brocade motifs fussy. The preferred motifs are the sun, flowers, and dragons. The costume is accompanied by the belts and Pieu scarfs with a few silver pieces of jewelry that make the costume more beautiful. 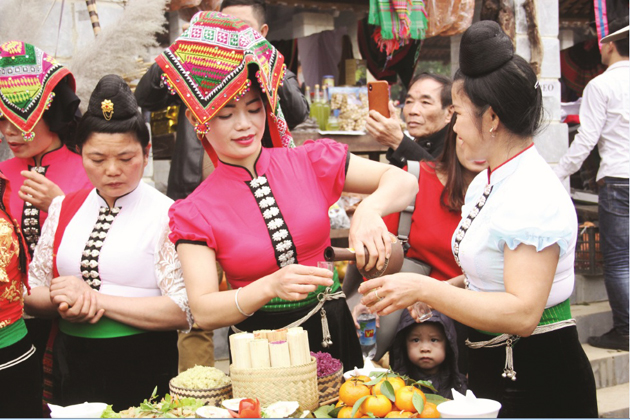 The H’Mong ethnic group has traditional costumes that are very sophisticated and colorful, usually made of linen with many colors highlighted with a variety of designs. A complete outfit consists of a black shirt, a colorful skirt, leggings, and headgear. The H’mong female dress is very beautiful and prominent, they often attach silver coins and beads on the dress to enhance the aesthetics as well as express the traditional spiritual will. 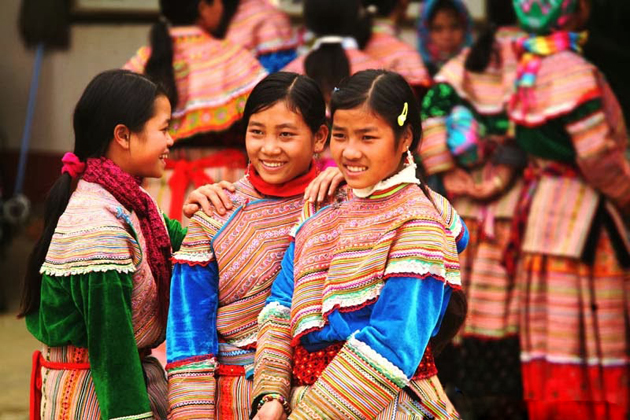 Not as colorful as other women’s clothing in Vietnam, but the traditional costumes of the Cham women have an incredible attraction. Cham women think the traditional tunic is the most sacred and beautiful clothing. A complete costume includes a tight-fitting tunic, a skirt that has the same color as the shirt, and a gorgeous headscarf. The highlight of the costume is the waistband that is tied across the chest and around the waist, which is prominently designed with golden iridescent shades and meticulous details. The woman dressed in this traditional costume with a graceful step is extremely attractive.

In mountainous areas, other ethnics often wear trousers or skirts and indigo vests with design motifs imitating wildflowers or beasts. In some ethnic minorities’ tradition, the young women have made skirts and vests with beautiful and colorful decoration in a style convenient for farm working in terraced fields or to travel on hilly slopes and mountain gorges. Almost all dress of Vietnamese ethnic minorities are handmade and carefully embroidered by the females of the village. They sometimes sell them on the night markets for money or for tourists who want a traditional costume as gifts for their family and friends.

Above all, traditional costumes of the Vietnamese tend to be very simple and modest. Through the time of developing, clothing of Vietnamese ethnic groups have been influenced by the foreign dress, some traditional clothes have been lost, substituted with more modern and suitable interpretations. However, the charming beauty that comes from the unique dress of the Vietnamese remains the attraction for travelers when coming to this stunning S-shaped country.