The Mausoleum of Ho Chi Minh in Hanoi, Vietnam is the ultimate resting place of modern Vietnam’s Great Father, Ho Chi Minh. A large, solemn building rises above the quiet Ba Dinh Square – Ho Chi Minh Mausoleum marked the history of a great leader, Chairman of Vietnam Communist Party (1951-1969), who read the Declaration of Independence on 2 September 1945, establishing the Democratic Republic of Vietnam. 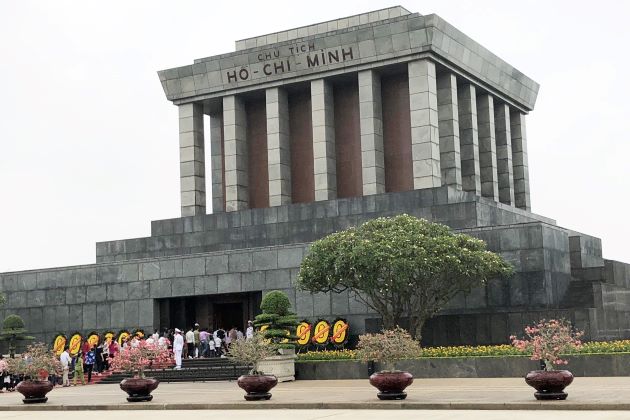 Originally named as Nguyen Sinh Cung but later changed his name to Nguyen Tat Thanh, Nguyen Ai Quoc and then Ho Chi Minh, the Vietnamese Communist Revolutionary Leader was the prime minister (1945–1955) and the president (1945–1969) of the Democratic Republic of Vietnam (North Vietnam). 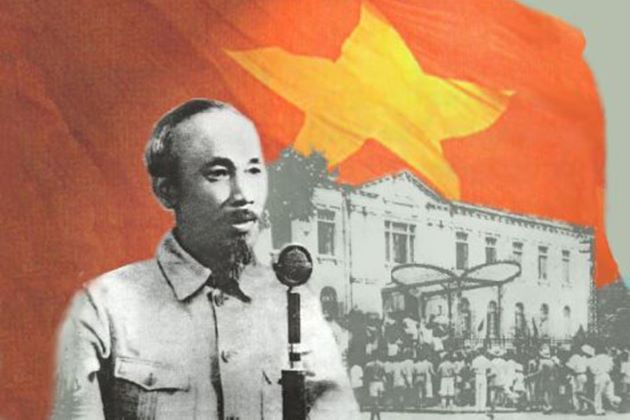 He was the man behind the Viet Minh Independence Movement from 1941 onward, leading to the foundation of the Communist-government Democratic Republic of Vietnam in 1945. Ho Chi Minh was a legendary military mastermind, proved by his defeating the French Union in 1954 at the glorious battle of Dien Bien Phu. Due to health problems, he retired from office in 1965, but his figure as the great inspiration for Vietnam’s independence movement remained visible. Just when the Vietnam war was awaiting its final peak, Ho Chi Minh passed away at 09:47 on the morning of 2 September 1969 from heart failure at his home in Hanoi, aged 79.

The Construction of Ho Chi Mausoleum

The construction of the Mausoleum began in September 1973 and came to the final stage in August 1975. In his will, the President asked to be cremated and has his ash buried on the hills of the North, the Center, and the South of Vietnam. However, in compliance with the wish of the Vietnamese people and in honor of his dedication to the country, the successor government decided to remain his body. Hence, the project of building the Mausoleum and surrounding complex was proposed.

Nevertheless, during that time, the Vietnam war was at its tough turning point and the project had to be halted. The president’s body was kept in a secret aseptic environment, waiting for a peaceful day soon to come. Since 1969, the Mausoleum was opened but due to a lot of hardship occurring (wars, bombing, natural disasters), it was years before his body was officially placed into the Mausoleum.

The granite mausoleum resembles Lenin’s Tomb in Moscow, yet the layout and design clearly reflect the culture and lifestyle of Vietnam. Equipment for infrastructure was imported from the Soviet Union, but Vietnamese experts had to alter the materials a lot to adapt to the tropical climate and condition in Vietnam. 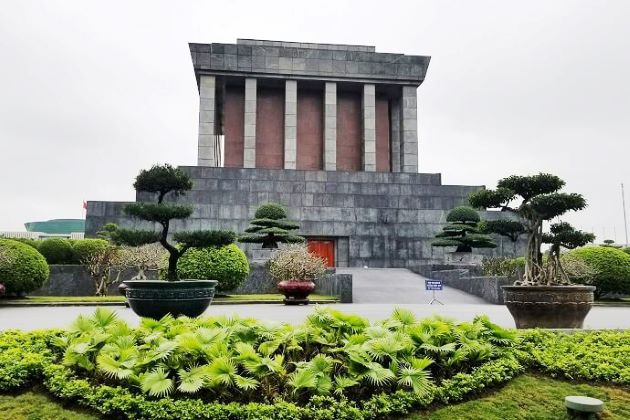 The structure is 21.6 meters (70.9 feet) high and 41.2 meters (135.2 feet) wide. Grey granite made up the external design, while the interior is dominated by grey, black, and red polished stone. The words “Chu tich Ho Chi Minh” (President Ho Chi Minh) were inscribed on the Mausoleum’s portico, while the slogan “Nuoc Cong Hoa Xa Hoi Viet Nam Muon Nam” (State of the Socialist Republic of Vietnam Forever) is on the banner beside.

Inside, the embalmed body of President Ho Chi Minh is kept in a cool, central hall, guarded by an honored officer. The hall is quite dark and the body is protected by a glass case, in dim lights. Every week, there are hundreds of visitors showing to pay their respects at the mausoleum. Visitors have to keep their legs covered, be silent, and walk-in two lines. Hands must not be in pockets or crossed. Smoking, eating, photo taking, and videotaping are also strictly forbidden. 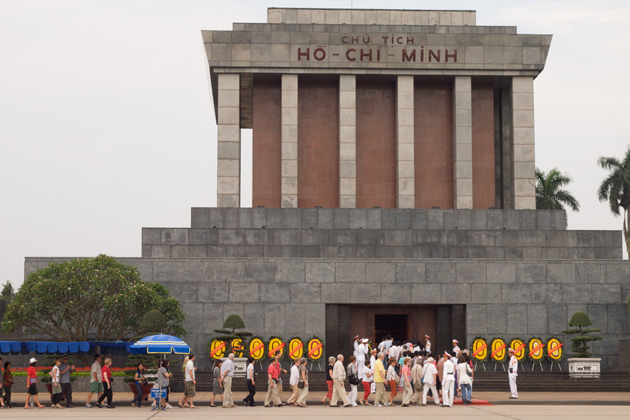 Ho Chi Minh Mausoleum is a sacred place of significant historical value and is definitely a must-visiting destination for any tourist to Hanoi city. Below are the highlights of the relic that beckons visitors: 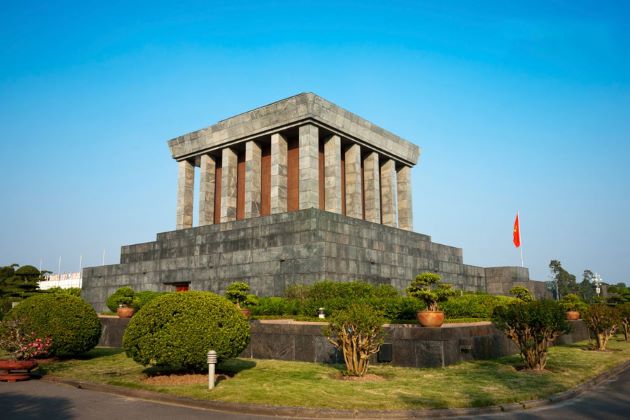 How to Get to the Ho Chi Minh Mausoleum

Ho Chi Minh Mausoleum is located on Hung Vuong Street, Ba Dinh District, Hanoi. The Mausoleum is accessible by both private and public transportation. For private transportation users, parking is available at the Ong Ich Khiem road, in front of the Ho Chi Minh Protection High Command building and the Ngoc Ha road, at the entrance gate of the Ho Chi Minh Museum. Buses number 09, 34, 22 all offer a stop at the Le Hong Phong Road, just less than minutes walk to the Mausoleum.