The combination of ancient and modern or the sumptuous culture of two continents of Asia – Europe has made the beauty of the ancient streets of Hanoi. The Hanoi train street in Ba Dinh District is one of such special places. The daily life beside the tracks seems normal to the locals but extremely amazing and a little bit scary for tourists on Vietnam vacation.

The railway from Hanoi Railway Station (Hang Co Railway Station) was built more than 100 years ago by French to serve tourists and transport goods to the northern provinces.  The Hanoi train street is located from the intersection of Dien Bien Phu street to Phung Hung street, which is “super narrow” due to the row of houses on both sides. During Hanoi tours, foreigners often begin to enter this street at the intersection of Dien Bien Phu Street or Phung Hung Street intersection and finish the journey at the end of Phung Hung Street after enjoying special experiences. 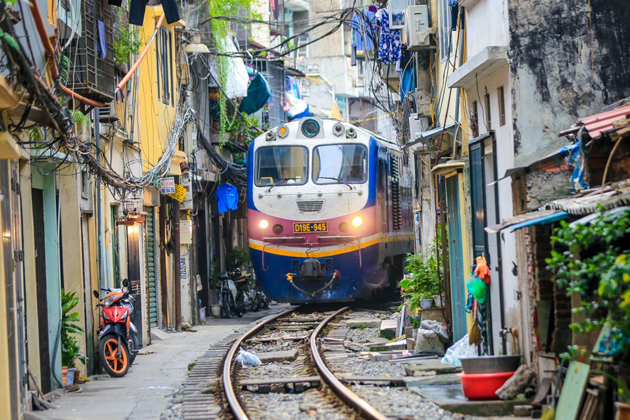 Along Hanoi train street, every house or coffee shop has a train timetable for visitors. Just take a look at the timetable to be aware of the train to ensure safety when you visiting this street. This railway serves the Hanoi – Lao Cai trains, with 4 trains daily crossing this narrow railway. The trains run at night and early in the morning, so it is quiet during the day. However, there are still some trains going through this street in the daytime.

As in any other streets, Hanoi train street also has all the shades of life, with all happy or sad, new or old stories. The legendary ” curving railroad” of this railway attracts many international guests. From the day it was reported to foreigners as a must-visited-once destination when arriving in Hanoi, the train street is much more bustling. However, its calm and peaceful space is not broken. 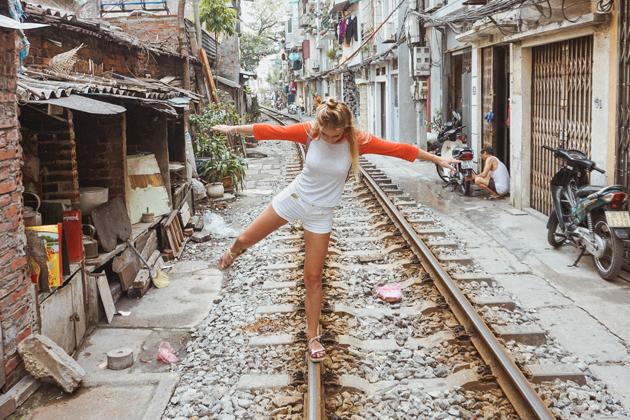 The Hanoi train street has a railroad track crossing with also many small booths and rows of houses on two sides. The strange living of the locals in the eyes of foreigners has attracted many visitors. They are surprised and curious about a small street with the width is just over 5m but it was a very special and unique beauty. Therefore, not only the Long Bien Bridge, ancient streets or traditional places in Hanoi but the Hanoi train street also become famous sights in the heart of the capital.

This tiny street, which has vitality for decades, suddenly went into poetry and photography by the inherent beauty of simplicity. The visitors enjoy the moment of living in this narrow space and sipping a cup of coffee. Then, when the sirens signaled howling, they will run close to the walls of the local houses, peer out the head and enjoy the train passing through the street.

Every afternoon, many families put the stove right outside the door, straight to the street to cook rice. Smoke from coal burn far away, blur the eyes of visitors. Although the land is crowded, each house only has enough space for television and bed, but everyone is still attached to this place. Some people might wonder why Hanoi train street can be a place to live, the train whistle clangs noisily every day, the road is narrow and the rock is scattered everywhere. Still, many generations who have lived in this street do not want to leave. Therefore, in the inconvenience, residents of Hanoi train street find no inconvenience at all. 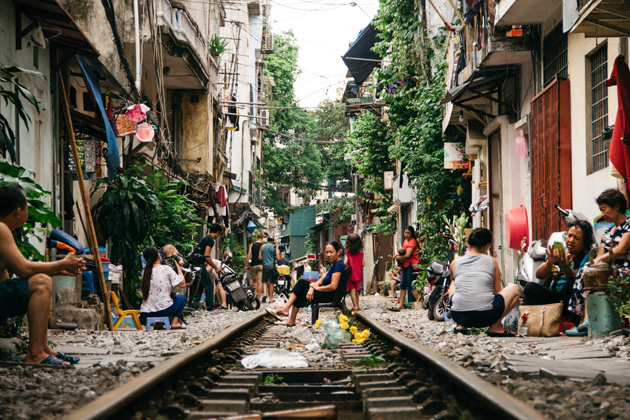 In the daytime, Hanoi train street space “belongs” to only the people. When hearing the siren,  seeing the lights flashed in the distance, people whispered to each other, “Oh, the train is coming !”. It is quite fun while all neighbors lean out to see the train passing by. For years, dozens of people come and go, do not understand why every time the train passes by, they still peer through the window and watch the train, still feel excited and happy, although the trains appear regularly every day.

The train is on schedule without any resting day and the people on both sides of the street keep calmly living their own lives every day.