Located in a perfect position – a feng shui masterpiece of land, water, and wind – in the southwestern corner of Kien Giang province in Vietnam, Ha Tien is one of the most attractive places in Mekong Delta Tours. Among its many charms, Ha Tien receives a cooling breeze off the sea, river, and hills all day long. Its irresistible combination of bustling markets and languishing fruit bats, shophouses in ruins and hills, delicious street food and local temples, pretty pagodas, makes Ha Tien become the “jewel of the Mekong Delta “. As a popular transit point for tourists traveling on Vietnam Cambodia vacation packages between Phu Quoc Island and the Cambodian coast, Ha Tien should be a wonderful destination in its own right. 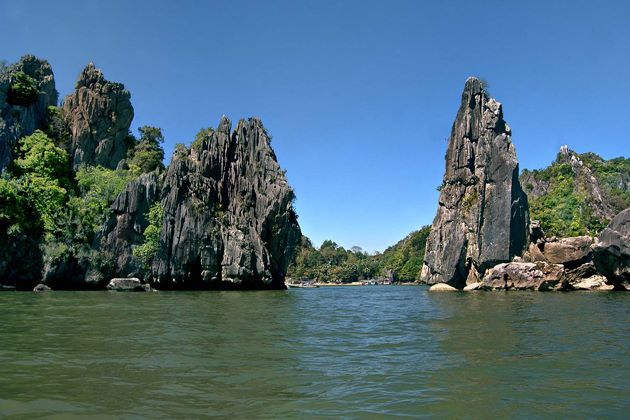 Not far from Phu Quoc (only 90 minutes by boat) which develops enormously recently, Ha Tien offers you all that Phu Quoc has left behind. Its physical location – nestled between limestone hills on the banks of a river just before sinking into the sea – is only part of its appeal. In addition, Ha Tien has a real charm and a unique beauty, especially along its silent and dark alleyways and its lively waterfront. There is also plenty of impressive things in Ha Tien await you to explore, such as its history, culture, food, accommodation, excursions, and the interesting ethnic diversity.

Originally, Ha Tien belonged to Cambodia, which is not surprising when you look at the map. Around 1713, a Chinese adventurer from Canton, named Mac Cuu, seized the area to make his stronghold. The Cambodians desolated the help of the Siamese and took over the city in 1715. However, Mac Cuu with the support of the Nguyen dynasty lords managed to take back his property. When he died in 1736, his son- Mac Thien Tu succeeded in taking back Ha Tien. From then until the late eighteenth century, there were only invasions (the Khmer, the Siamese, the Tay Son) and looting. After this event, the whole region eventually fell into the hands of the Nguyen: this is its real connection to Vietnam.

Between 1975 and 1979, new ruthless masters of Cambodia vindicated with great virulence in Mekong Delta, the ancient Khmer territory before Annamese arrival in the XVIII century. Pol Pot’s men clashed with the powerful Vietnamese army. They organized numerous incursions into Vietnamese villages along the border between Ha Tien and Chau Doc. Several massacres of villagers were perpetrated, as evidenced by the stele of Haine erected near Thach Dong temple in Ha Tien and the memorial of the mass grave of Ba Chuc (halfway between Ha Tien and Chau Doc).

Top 8 Things to Do & See in Ha Tien, Vietnam

The Tombs of the Mac Family

The tombs of the Mac family are located at Binh San Mountain, Duong Len Lang, 34, which is a little away from the city.

On the banks of the Ao Sen pond is Nui Lang Hill, the “Tomb Hill”. A staircase on the hillside on the right reaches a space where are scattered several tombs. There are buried about ten members of the Mac family. It was neither more nor less than the most powerful feudal family in the region. Therefore, of course, they did not choose the ugliest thing. The largest tomb is the one of Mac Cuu, the patriarch (at the top of the hill). It is located on a semi-circular esplanade at the top of the stairs. It was Emperor Gia Long who ordered the construction of his tomb in 1809. The dragon and phoenixes that decorate the tombs are sacred beasts among the four legendary animals revered in the Vietnamese tradition.

Founded by Mac Cuu in 1730, Tam Bao Pagoda is located at 328 Phuong Thanh and is now home to many nuns. In front of the pagoda, a statue of Quan The Am Bo Tat stands on a lotus flower in the middle of a pond. In the pagoda, the large statue in bronze painted under a canopy represents A Di Da, the past Buddha. Sixteen tombs of monks surround the pagoda.

Thach Dong Temple is 3.5 km from the city center, on the road to the beaches of Mui Nai. On the roadside, to the left of the entrance to the site, a stele of Haine commemorates the atrocious massacre of 130 Vietnamese civilians perpetrated by the Khmer Rouge of Pol Pot on March 14, 1978 (a desperate gesture on their part because the Vietnamese troops had definitively driven them out of power by invading the country on January 7, 1979 ). We gain on foot (5 minutes) the cave dug into the limestone rock of a rocky peak. The temple is situated in a kind of pavilion covered with tiles. Superb view and extended on the coastal plain. 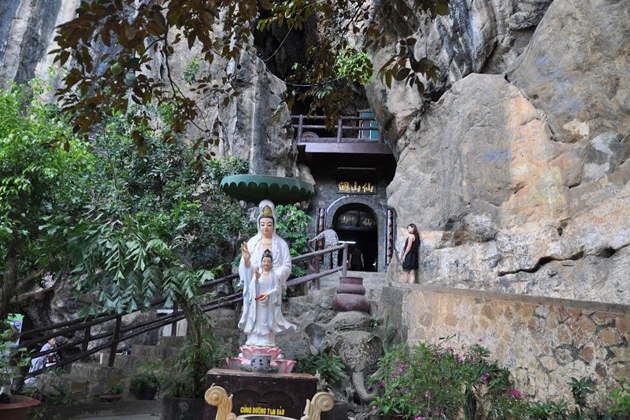 Mui Nai Beach is about 8 km west from the city along Mac Tu Hoang Road. The beach runs along a shady bank where are lined the groves and some guesthouses. The place is appreciated by Vietnamese families. Efforts were made to clean the premises. Mui Nai is charming even though it does not have the exotic scale of the beautiful Duong Beach on the Hon Chong peninsula.

Ha Tien has a bustling market along the To Chau River. Many imported products from Thailand and Cambodia here are cheaper than in Ho Chi Minh City. Smuggling cigarettes is a flourishing business. Along the shore, the fish market is also interesting, especially in the morning when the fishing boats come back. 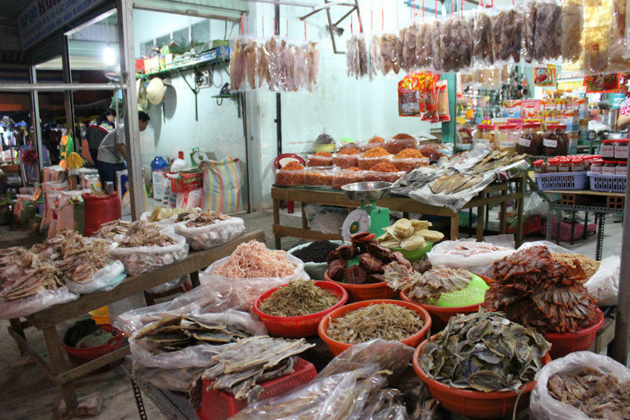 25 km from Ha Tien towards Rach Gia, this cave served as a refuge for Nguyen Anh, the future Emperor Gia Long, in 1784, while he was being pursued by Tay Son rebels. His soldiers discovered coins zinc engraved, hence its name “cave to coins”. From the ferry port of Ha Tien, boats reach the cave in 1 hour.

Used to be the haven of pirates in the past, this small island completely changes into a gorgeous pearl among the sea. With the easy travel from Ha Tien by boat, visit Pirate Island will give you a chance to escape from the world, enjoy the nature of dreaming beaches and wonderful sunshine. You can also join the fishermen to catch seafood off the shore. 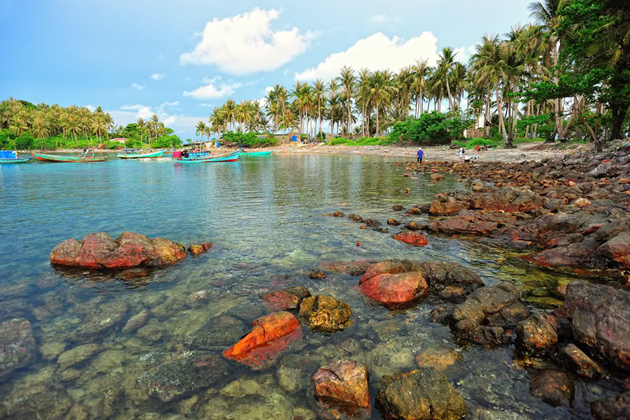 The mountain was the military base of the Vietnam People’s Army in the Vietnam war. On the journey of more than 3000 m to conquer the mountain, you will explore a chain of mysterious caves as well as the diverse floras and faunas. From its peak, you can behold the great panoramic view of Ha Tien, which leaves you unforgettable memories.

The casual local cuisine of Ha Tien is fantastic. From seafood stalls to street noodle soup vendors, there are plenty of tasty dishes at very reasonable prices throughout the city. Based on the culinary influences of Khmer and Chinese (who still make up a large percentage of the population here) and sourcing ingredients from the region: fruits, vegetables, and rice from the fields of the Mekong Delta; fish from Giang Thanh River and the Gulf of Thailand – food in Ha Tien is attractive and delicious. The gastronomic atmosphere is very local, informal, and most often in outdoors. 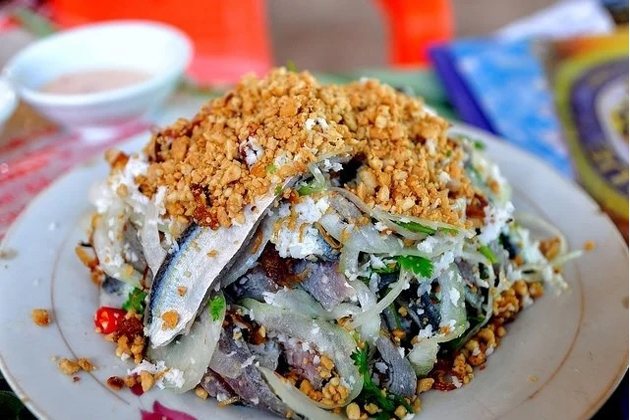 How to Get to Ha Tien, Vietnam

Ha Tien is easily accessible by bus from Ho Chi Minh Tours most major cities in the Mekong Delta region. In addition, Ha Tien is one of the most popular border crossings between Vietnam and Cambodia, and there are also connections from Cambodian destinations such as Kampot, Kep, Sihanoukville, and Phnom Penh. By the sea, the regular passenger ferries connect Phu Quoc Island to Ha Tien. The nearest airport is Rach Gia (90 km) which has daily flights to Saigon. Ha Tien can also be reached by motorbike via a scenic drive through the Saigon Delta. See below for more details:

Regular buses run between Ha Tien and Saigon every hour throughout the day. However, the most comfortable buses are coaches that are between 7:00 to 10:00 and 19:00 to 10:00. Tickets are approximately VND 150,000 to VND 250,000. The journey time is approximately 9 hours. If possible, try to book on a reliable bus company, such as Phuong Trang (Futa), Mai Linh, and Kumho. Tickets can be booked at the bus station or, just as easily, through hotels, and travel agencies. From Ho Chi Minh City, buses leave from the gigantic Mien Tay Bus Station (395 Kinh Duong Vuong, Binh Tan district).

Ha Tien Bus Station also serves dozens of destinations in the Mekong Delta such as Rach Gia, Chau Doc, Long Xuyen, Can Tho, Ben Tre, and Ca Mau. Ticket prices to any of these destinations are between VND 70,000 and VND 150,000.

Ha Tien quickly passed Rach Gia as the main port for the boats on Phu Quoc Island. Speedboats pass at least 4 times a day in both directions, and slow ferries also sail around 4 times a day (there are many more cruises during peak months). The duration time is 90 minutes for speedboat and 2.5 hours for the slow boat. Tickets can be booked at the ferry pier, which is located across the Giang Thanh River from the center of Ha Tien. However, most hotels and travel agencies also can easily book tickets for you. In general, most speedboats are operated by Superdong and the ferries are operated by Thanh Thoi. 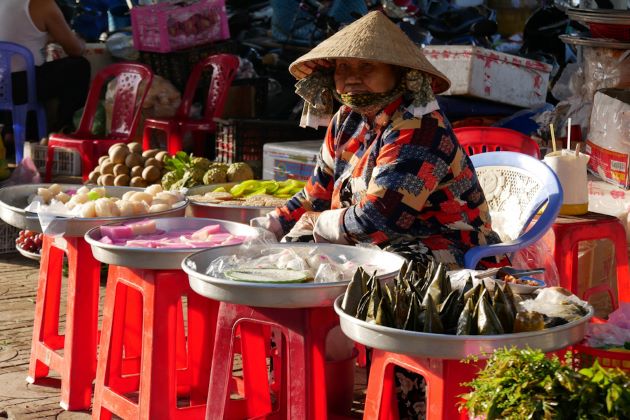 By Motorcycle, Bicycle or Car

It’s a long drive from Saigon to Ha Tien, but it’s also one of the most beautiful ways to see the Vietnam region in the Mekong Delta. Staying off the main roads as much as possible, the journey from Saigon to Ha Tien can be very fun, and there is plenty of good scenery and places of interest to stop along the way. The distance is 300 km, making it a one or two-day motorcycle ride. By bike, it’s not a bad road because the Delta is very flat, so driving is relatively simple.

Vietnam Airlines has a daily flight between Rach Gia and Saigon. Flights in both directions depart between 6 am and 7 am; the flight time is only 40 minutes. Tickets are USD 30-USD 70. From Rach Gia, regular buses are available at a distance of around 90km and travel time of about 2 hours.

Ha Tien is a good value for budget travelers in Vietnam vacation. Hotels in Mui Nai beach offer a lot of hotels and homestays with a great view of the sea. Besides, excellent mini-hotels and guest houses have sprung up all over the city, mainly for travelers (foreigners and Vietnamese) who travel between Cambodian beaches and Phu Quoc Island in Vietnam. For example, some Ha Tien hotels are our personal preferences: Ha Tien Hotel, Anh Van Hotel, Du Hung Hotel, River Hotel Ha Tien, Hai Yen Hotel, and so on.