The Khmer ethnic group of Vietnam people residing in the Mekong Delta concentrated in the southeastern provinces such as Tra Vinh, Soc Trang, An Giang, Kien Giang with a population of about 1.3 million people (2009). The Khmer language has the origin from the Mon-Khmer linguistic group. Despite living with different ethnic groups such as the Kinh and Chinese people, the Khmer still preserve their own characteristics.

The Khmer people have traditionally intensive cultivation, most especially the plow by two buffaloes. They are skilled labor in fishing, weaving, knitting, making pottery products, and the special type of sugar from “thot not” trees. Breeding cattle, pigs, chickens, ducks are quite common. In daily life, the Khmer people manufacture many kinds of sauce made from shrimp, fish but the most famous one is the sauce made of stripes, boning fish, catfish.

Before, the Khmer people lived in the house on stilts, but at present, this number just left very little. They mainly dwell in the house on the land and live with the Kinh people in the houses with thatch walls an straw roof. Khmer people often settle down after marriage. The wedding ceremony is one of the outstanding cultures of the Khmer compatriots. The traditional wedding rites are very complex with 4 stages. Each stage has the characteristic rituals. One of the cultural characteristics which the Khmer preserved is cremating the dead.

Khmer people celebrate a lot of exciting festivals during the year. The biggest one is Chol Chnam Thmay (New Year festival) including the gong performances and the possession of the Buhha’s statues to the hall of worship. Besides, the Khmer organize some major festivals such as  Buddha’s birthday, “Don ta” ceremony (Forgiving the dead’s crimes), and Ooc Bom Booc (worshiping the moon).

Whether the culture of costumes is rich and diverse, the traditional costume of the Khmer woman always keeps these features, cultural identities of ethnic. Traditional Khmer women have a harmonious combination between “sarong” and “sbay” with the beads, sparkling beads are attached to the sophisticated pattern.

Today, Khmer’s traditional clothes are in many variations, new style, and beauty with many different colors in the direction consistent with the times but most remained at the level of relations between the traditional and the modern. In particular, when the Khmer woman cloaked in traditional costumes performing dances of his nation, adding to the beauty of the costumes and the charm of a Khmer woman.

The concept of Khmer to be healthy should wear on the wrist or waist a rope with a bone piece charm or clutches animals such as tigers, crocodiles, and wild boar to prevent toxic wind, demons; therefore, jewelry is a very important part of the costumes from ancient to the present. The craft of jewelry appeared from very early and have unique products. The necklace, bangles have various shapes such as crescent, rhombus, fruit, birds, and fun been loved by women and they considered this is an indispensable item each time to go out on the street.

Parallel to the mark for settlement, the Khmer people also inherit Angco cultures, civilizations rice with customary activities of the group of migrants Kinh, Hoa, Cham create an identity, a culture of its own. 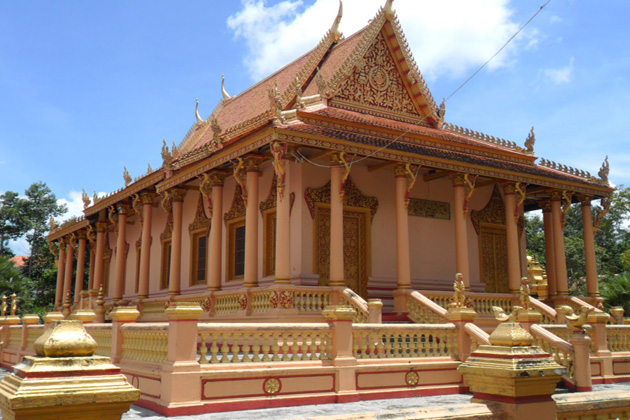 The activities of the religions and beliefs of the Khmer people are concentrated in the pagodas. Khmer pagodas have a lot of differences from architectures and structures compared to other Vietnamese pagodas. The religious and cultural activities not only contain the ceremony and preacher, but it also has rich cultural activities healthy. In addition to coming to the pagodas worshipping Buddha, chanting, ceremony, cultural-artistic activities with folk games become indispensable

The cuisine of the Khmer is rich and varied. From dishes in daily life to the dishes in the festivals, the Khmers show respect of humans to the natural environment. They choose the materials derived from natural, processed, and created many different dishes. Therefore, the Khmer people had a lot of typical dishes such as:  “bo hoc” sauce, sour soup, “som lo” soup, noodle soups, cake jaggery, jaggery water, etc.