The reign of the Nguyen Kings lasted from 1802 to 1945. This dynasty is noted for its closed-door policy, which hindered the progress of the country and caused it to rapidly fall under French domination (1884). During the early period of the Nguyen dynasty – prior to the French invasion – Vietnam’s architecture underwent many changes, although each region of the country had its own characteristics: 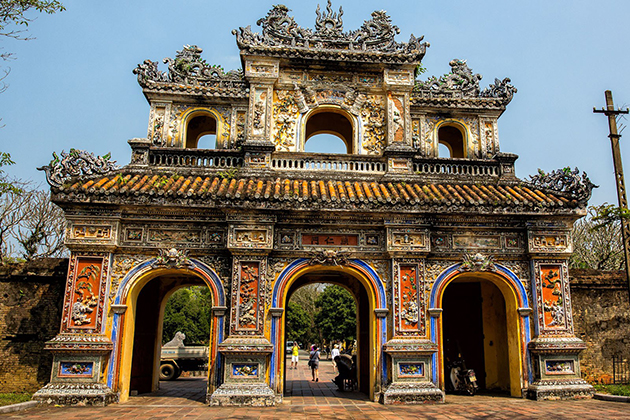 General Characteristics of the Architecture of the Nguyen Dynasty

The Architecture of Hue Imperial Complex

While preserving the basic elements of Oriental architecture Vietnamese architecture also absorbed some elements of Western architecture as clearly reflected in the composition of the Hue Imperial City we see today the square, three-layer Citadel follows the Asian architectural style whereas the Phong Thanh (Outer Rampart) and the Trail Binh Dai (alias Mang Ca fortress) bear the influence of the French Vauban model (the Hanoi Citadel which was built in 1803 during the reign of Emperor Gia Long, also follower this model).

The Architecture of Palaces & Pagodas under Nguyen Dynasty

The palaces and pagodas (which have survived to date) follow the traditional wood structure with an odd number of rooms marked by separated sets of beams and rafters. However, they differ from buildings of preceding dynasties in one aspect: in order to acquire greater space, the roof of the front
house and that of the back house are linked to each other by a complimentary roof (mai thua luu), a pattern which is called “trung thiem diep oc”.

Also, the wooden beams and rafters of buildings in Hue seem lighter than those in the preceding periods with the addition of a new set of arm-shaped beams and rafter (vi keo gia thu), which constitute an improvement as compared to the superposed rafters in North Vietnam. The beams and rafters are elaborately decorated with various motifs (flowers, leaves dragons, and phoenixes).

Instead of the shorter rafters used in the previous period, the building in Hue has 2 or 3-tiered horizontal consoles, one end of which extends out to support the verandah roof while the other end rests on a verandah column Verandah columns of a number of buildings have three distinct parts (base, body, and head) and are profusely decorated. The same thing is also seen in many structures in North Vietnam, that date from the same period. 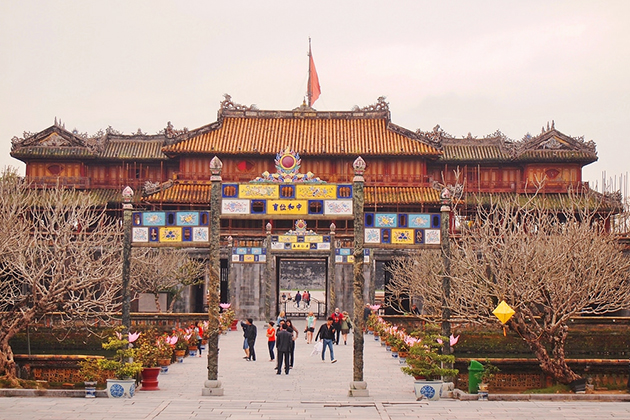 Viewed from the outside, the palaces, pagodas, and communal houses of the Nguyen dynasty look slenderer and lighter than similar structures of the preceding periods. One reason is that they have many layers of the roof (roofs of the front house and the backhouse, and a complimentary roof covering the area in between the two houses). Each building or complex has 8 roofs with space in between the two layers of roofs (co diem), the comers of the roofs are straights but the extreme ends are seemingly curved due to the edge of the roofs and the decorations at the angles thereof. Verandah columns are also slenderer and repose directly on the Brickyard (and not on the foundation of the verandah). Space in-between the two layers of roofs (co diem) is covered with bricks and panels decorated with bits of colored porcelain and ceramics quite different from the Tay Phuong pagodas, Kim Lien pagodas of the later Le period in North Vietnam where the “co diem” is either left empty or covered with wooden boards.

The Architecture of Art under Nguyen Dynasty

A substantial number of enamel bricks of yellow, sky blue, and orange colors are used for decorating balustrades and ventilation holes in the walls of constructions. Paintings in the form of wood carvings put on the ridge of roofs are decorated with numerous bits of glass and ceramics of various colors. Brass decorative panels, duly enameled, in five colors, are put on the three-door gates of the Royal Citadel and royal tombs. These decorative elements are specific to Hue’s architectural art. Relief paintings with bits of colored ceramics are also found in many pagodas and temples of North Vietnam which date back to the Nguyen time. Hue’s architecture is well integrated with natural landscapes, (mountains, ponds, lakes, and trees).

Hue’s architecture did absorb, to some extent, elements of Cham architecture (e.g. brick gates to The Mieu temple, and to the Khiem Lang tomb of Emperor Tu Duc, the upper part of the arch-shaped gate which resembles a 3-story stupa getting smaller and smaller in size to the top). read more

During this period, Vietnam became a semi-feudal colony of France. In order to consolidate their rule on a long-term basis and serve France’s interest, the colonial authorities carried out different policies with respect to different regions of the country. South Vietnam was subjected to assimilation. North Vietnam was a protectorate, while Central Vietnam was nominally under the Court of Hue, but both regions were actually governed by French Residents Superior. Many new types of structures were introduced into Vietnam: Catholic churches, offices, and residential buildings for French authorities, military barracks; structures for cultural, educational, healthcare, transport, and postal services, factories, trade centers, etc. Architectural planning for Vietnamese cities and towns was started, which laid the foundations for further development.

The Mixture of Western & Eastern Architecture

The architectural style of the early Nguyen dynasty was continued in North and Central Vietnam, though affected to some extent by Western architecture. This had resulted in some mixture that did not lack harmony or artistic value (e.g. the big pillars at Emperor Khai Dinh’s tomb or the main facade of the An Dinh Cung Palace in Hue as we see today). Yet, one should recognize the creativity and imagination of the Vietnamese masons in decorating the interior of the Palace with bits of ceramics and glass. In spite of the elements of a “hybrid” architecture, the Palace looks harmonious thanks to the combination of colors and Vietnam zed decorations of Western origin. 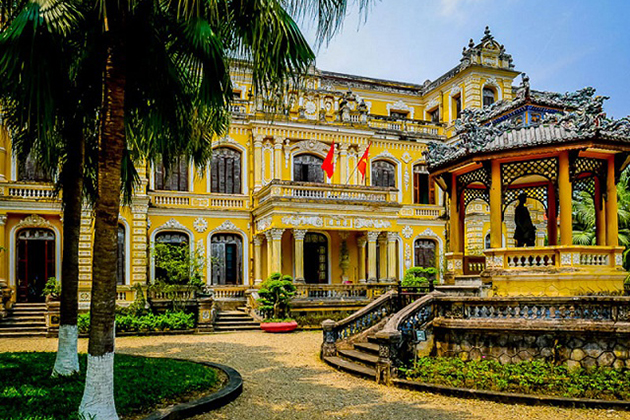 Several pagodas in North Vietnam also expose some mixture of this kind. For example, the ceremonial hall of Co Le pagoda (Nam Dinh province) looks similar to that of a Catholic church. At Cua Ong Pagoda (Quang Ninh), the columns of the square pavilion are imitations of similar columns in European buildings (decorated with motifs of flowers and leaves on their upperparts, and dragons and phoenixes on their lower parts while the roofs are in the Vietnamese pattern).

As mentioned above, Western architecture is represented in Vietnam by various types of buildings, which catered to the needs of French rulers, businessmen, and French citizens of Vietnamese origin. This architecture came to Vietnam in different styles: Gothic, ancient and modem French, and European. Some buildings adhere to a specific style and some involve a combination of various styles. The Western architectural styles were introduced into Vietnam at different periods of time, modified according to the political, economic, and social conditions of Indochina and the world, as well as to the aesthetic tastes and whims of the French owners.

But the designers of Western-style buildings were also keen to learn from Asian architecture with a view to making the constructions more suited to the conditions of a hot and humid tropical climate. As a result, they adopted the traditional steep and curving roof covered with tube tiles and decorations, stylized images on the edges, and ends of the pitch roofs. Steep roofs were also installed above windows and doors.

They also adopted some elements and decorative motifs of traditional Vietnamese architecture, such as the stylized Han ideogram “longevity” on the main facade, the old “Fairy” motif (Co Tien) on the balustrade. Illustrations are the Office of the General Department of Physical Education and Sports 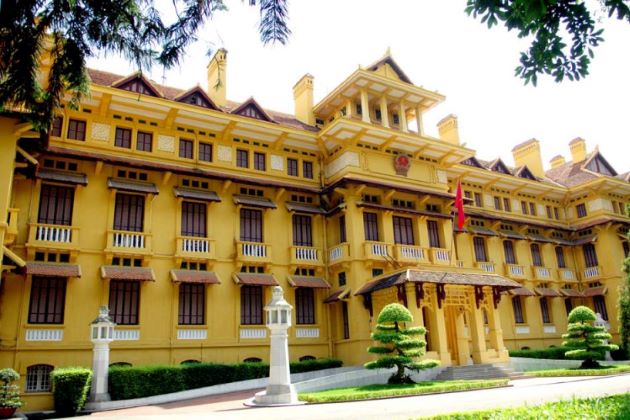 The traditional architecture of Vietnamese feudal dynasties had no designs and drawings. The construction of palaces, pagodas, and houses was done in accordance with personal experience and traditions and drawing confined to decorations and decorative motifs. Unlike it, Western architecture had an academic character with buildings designed by duly trained architects.

Traditional Vietnamese architecture uses wood as the main building material, brick walls playing a subsidiary role. But Western architecture uses mainly bricks and tiles with steel and concrete (in the structure of floor and roof). During the colonial period, modem architecture involved box-like buildings with flat cement roofs, a system of reinforced concrete columns and frames, and large glass windows spanning the whole body of the building. (Ba Dinh, near the Ho Chi Minh Mausoleum in Hanoi).

Traditional Vietnamese architecture based on wood, bricks, and tiles played a dominant role in Vietnamese cities and towns prior to 1884. It had to give way to Western architecture during the 1884-1945 period (brick, tiles, steel, concrete).