The Chinese excel in depicting life through novels, chronicles, historical books, and pictures. Europeans are expert in precision measurement and detailed descriptions of things; they have a multitude of lifelike pictures and sculptures as real as photographs. With them to relive the past presents no problem. In Vietnam, it is very difficult to make a historical film or play. We do not know what Nguyen Du, Emperor Quang Trung; General Tran Hung Dao looked like, how they ate, were clad, lived or moved about. However, there is an exception: we can know – generally speaking – how did people learn at school a hundred years ago. For a joke, they say that: In old schools, “the sages and saints’ characters” (i.e. the Confucian doctrine) were taught, hence teaching was conducted through a traditional teacher, a book and a whip.

What’s it about? – It is a matter of classroom punishment. When a Chinese character is wrongly written a pupil will be compelled to creep through another schoolboy’s anus! A shameful punishment like what the Chinese general Han Tin had suffered: once he had to pass through a butcher’s hip in the historical novel “Dongzhou Lieguo” (‘The Various states of the Eastern Zhou Dynasty’). Another form of punishment is “hand thrashing” in which the whip really works. And what about examinations in the olden days? Here is the scene of some candidates’ huts and bamboo beds. They had to set up a hut and bring a bamboo bed to sit on while writing their exam papers. If they violate the exam regulations they will be cangue as Ngo Tat To have described in his novel “Huts and Bamboo Beds”. If a student is ranked as the third successful candidate in the highest imperial examination he will be given an official’s hat and a long gown and be permitted to pluck a flower in the royal garden. To a student, the zenith of glory is his earning a doctor’s degree so that he can triumphantly return to his native village. Since he is about to receive a mandarin’s position, he is warmly welcomed home by the whole village in a solemn procession in which. “The man’s hammock is heading first, soon followed by that of his spouse”. Here is also the most romantic dream of a student and his girlfriend’s too!

The drawing and etching strokes, irrespectively being fine or well-marked, are uninterruptedly concise, regular and closely fit the figures. Thanks to the simplicity of each clear-cut stroke, the authors have succeeded in depicting things both in general and in detail. The drawings are not only beautiful but also easy to understand, similar to textbook illustrations. With an expert eye, keen and subtle, the artist quickly perceives the characteristic and typical features of things. He draws first with his eye and then with his hand! The authors have observed even the tiniest routine activities in a household, viz. wearing a turban (a headscarf), gathering one’s hair in a chignon, taking a bath… Here in the streets: a kind of “taxi” was born in cities during the process of their Europeanization. New social contradictions had arisen. A mandarin with his suite carrying boxes and water pipes…was in contrast to a group of unskilled laborers waiting to be hired.

“Thi” in Sino-Vietnamese means ‘market’. Let’s go and see a market when we arrive in town. Life is bustling there with all sorts of people. What fun and chaos! There were buyers, sellers, shops and blind beggars too! This is a theatre notice informing the performance of “Son Hau”, a traditional theatre opera. Hanoi will lose its charm if restaurants are lacking, the reading of Thach Lam’s literary work “Hanoi and its 36 guilds and streets” has told us that. Eating out in the daytime and especially at night was a source of pleasure for Trang An (Hanoi) city dwellers. The absence of this habit means the loss of a characteristic feature proper to Hanoi. Let’s observe this eating-place with an artist’s eye. Most cunning were water buffalo sellers. In times gone by, farmers accounted for 95% of the population. Men lived in poverty, backwardness yet they were honest and kind-hearted. Security for hamlets and villages was ensured by watchmen in watch-posts. Other activities included: irrigation for water conservancy, threshing rice at harvest time. There were many simple manual jobs such as frog catching, duck tending or dung collecting. 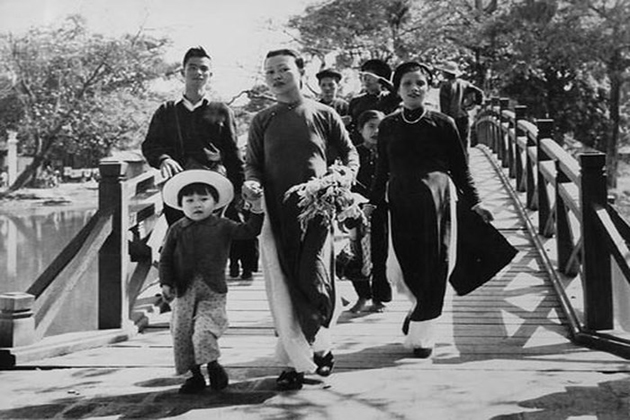 The system of public health consisted of traditional healers – native physicians who were concurrently geomancers, horoscopy experts, and fortune-tellers. Several medical treatments were used. Feeling the pulse for diagnosis preceded the filling of a prescription of traditional medicine. There were also very efficient medical treatments commonly referred to as “tricky” recipes.

Men used to be very superstitious. For example, a mother once put her baby into a large conical hat and left it in the market. Then she asked a virtuous person to take it home as an adoption. Thereafter she begged the person for permission to take her own baby back as if it were the latter’s child. She thought this would facilitate her in feeding the baby, free from evil spirits’ threat. Today the phrase “mang con bo cho” (‘taking one’s baby to market for abandonment’) denotes a person’s irresponsibility for somebody.

Let’s put aside the content of this picture so as to admire the beauty of its lines and composition. A little change will deteriorate it for sure. There were two healthy traditional games. On spring days, in hours of leisure, ladies used to play “tam cuc” cards. Rice-cooking contests were held during village festivals. On the other hand, many people were shocked to see two other base games designed by the French colonialists: climbing a greasy pole and frying pan licking. This young man is taking off his garment. He merely has a piece of cloth and a G-string to cover his half-naked body. Such a well-built and fine figure will no doubt conceal a wonderful mind.

The artists who compiled this pictorial encyclopedia in 1908-1909 were Nguyen Van Bay, Nguyen Van Giai, Pham Trong Hai, Pham Van Tieu and many others from Hai Duong province villages specializing in the traditional wood engraving. They had made 4577 drawings in all, ordered by H. Oger, a French scholar. Jointly With him, they left a priceless treasure of art and knowledge. Let’s not forget the image of Vietnamese engravers. For so many centuries, they have provided us with knowledge and have devoted themselves to art so as to leave us such a beautiful artistic heritage.