It is also called Vu Lan ceremony. According to Buddhist belief, on this day of forgiveness of sins, with the authorization of the King of Hell…Vu Lan Festival is celebrated on the 15th Day of the 7th Lunar Month. Vu Lan festival 2021 is on August 22nd, 2021.

What is Vu Lan Festival?

According to Buddhist belief, on this day of forgiveness of sins, with the authorization of the King of Hell (Diem Vuong), souls of the dead return to the world of the living to enjoy earthly pleasures Each family prepares a votive meal for ancestors. A ceremony is celebrated for the absolution of the souls of those who died tragically and those who died without bearing a son to perpetuate the cult; their starving souls are condemned to lead a wandering after-life in the world of shadow. The dead are offered cheap products: boiled sweet potato or cassava, roasted maize or rice, rice pancakes (banh da), fruits, rice soup (poured in cone-shaped banyan leaves and placed in bushes or garden corners so old or sick souls are not afraid to lose their rations to the crowd. (Expression: Cuop chao la da). On this day of forgiveness of the dead, in the living world punishment is lifted or softened, well-re-educated prisoners are released, and convicts exempted from painful hard labor. The words of Vu Lan, or Vu Lan Bon, are a phonetic transcription of the Sanskrit Ullamban (or Avalambana) which means “to hang, or to be hung!”

How Vu Lan Ceremony is Celebrated?

In the pagoda, a large scaffolding made of bamboo and wood is erected, extending Buddha’s altar to the yard, On the scaffolding are placed votive paper clothes and food. Monks practice the cult by offering gifts to the Ten Kings of Hell in accordance with Buddha’s recommendation (to Muc Lien, a disciple of Sakyamuni, who had seen his mother suffer awfully in Hell). 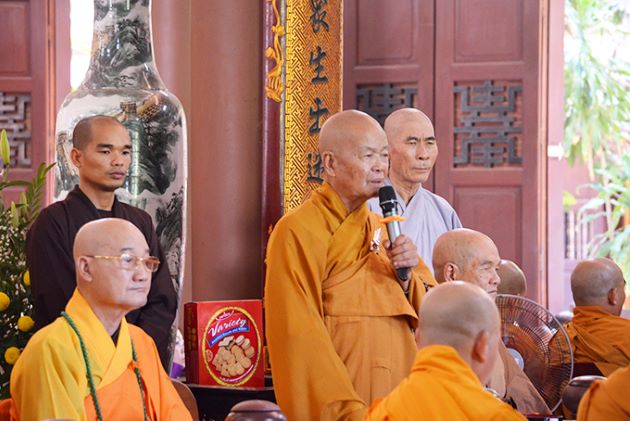