Hanoi Old Quarter is one of the oldest continuously developed areas in Vietnam that has gone through a history of 2000 years. Situated near the Lake of Restored Sword and Long Bien Bridge. Used to be a former citadel wall, the Old Quarter became more well-known as a crafts area when King Ly Thai To decided to move the capital from Hoa Lu to Hanoi in the 11th century. Later, the area turned into a village for Hanoi local people with a round structure with thousands of houses on stilts. In the 13th century, some tiny workshop villages gathered into craft cooperatives. Skilled craftsmen moved to the Quarter and performed similar services. They lived and worked together to transform private merchandise to the designated streets. 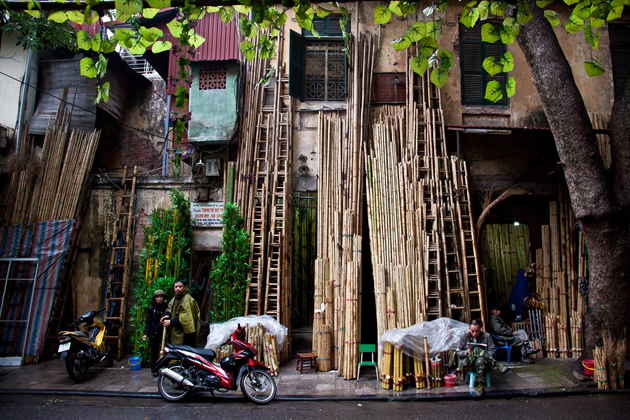 The Origin of Hanoi Old Quarter

The streets in the Old Quarter are homogenous. At the old time, the storekeepers had to pay taxes according to the width of their business area, so the inhabitants had to spend the rear of the buildings for living space and storage. As a result, the long and narrow tube houses were built. Typically, the house measures 3 meters wide and 60 meters long.

Not only function as the business area, Hanoi Old Quarter was also a rich religious heritage as well. The craftsmen brought their religious practices with them, so pagodas, communal houses, and temples were transferred to this new location. Therefore, there was at least one temple on each street. Nowadays, although the Hanoi Old Quarter is busy for its business, some of the old buildings still remained its structure and architecture.

In Hanoi Old Quarter, there are about 36 streets, but the actual streets are up to 70. The number 36 has rooted from the 15th century when the streets developed from workshop area into streets. Each street has a different function and characteristic. Let explore most famous streets out of thirty-six to have a closer look at the Hanoi Old Quarter.

In the Old Quarter, most of the streets started with the word “Hang”, which means shop or merchandise. Hang Bac is one of the oldest streets in Vietnam which dated back from 13th century. “Bac” means silver because the street was a silver manufacture under the reign of King Le Thanh Tong. Since the 18th century, the street has performed more functions. Besides making silver ingots, the street also sells jewelry and exchanges money. If a merchant wanted a large amount of money for business transactions, they would exchange the metal bars on Hang Bac. Although the money paper was used later, the name Bac remained as the unique point of the street. Nowadays, the street mostly sells gold, silver as jewelry and exchanges money. 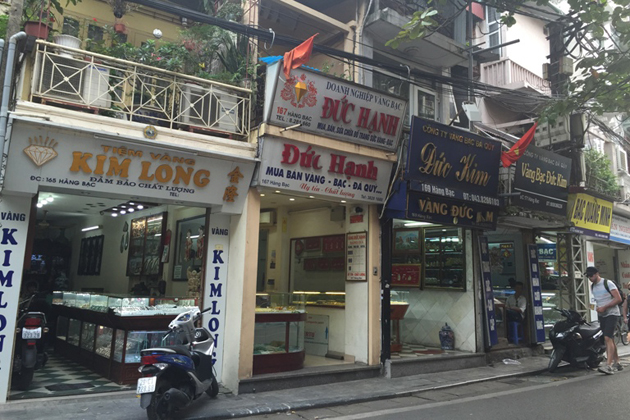 In the mid-19 century, Hang Be street was the place where the craftsmen made bamboo rafts. Each raft consisted of 12 to 15 bamboo poles lashed by the bamboo bark. The bamboo poles were sold in Hang Tre street. Bamboo raft played an important role in the traveling and fishing of the residents because they could easily move through Hanoi’s shallow river, swamps and lakes. 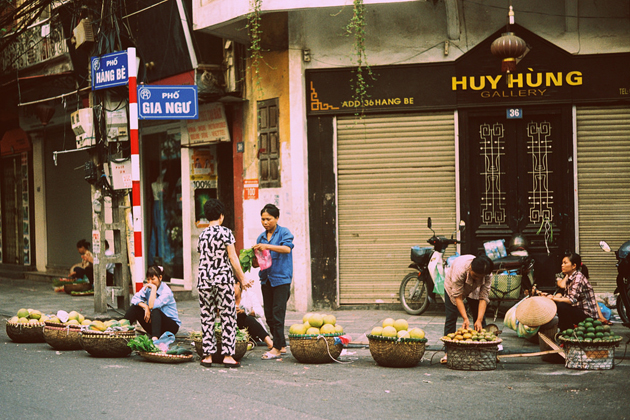 Cau Go Street means “Wooden Bridge Street”, which is located by the lake shore. Many years ago, there was a bridge connecting Thai Cuc Lake and Hoan Kiem Lake. Under the French colonialization, the lake and stream were filled with land and the bridge was not used anymore, but it was still a regular street for local people. Nowadays, Cau Go street is a business street where specializes in women’s accessories. 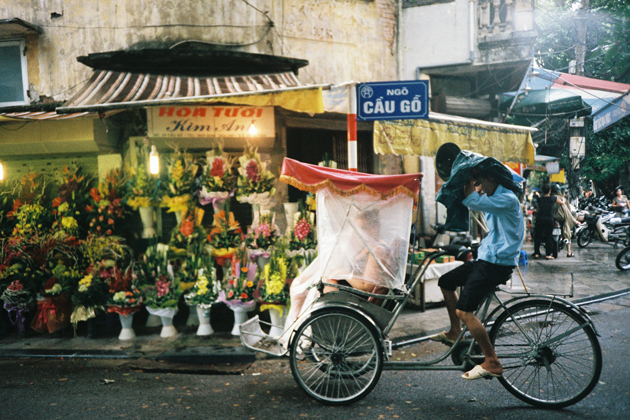 Hang Dao street is one of the main streets in the Old Quarter running from the north to the south, dividing the quarter into two halves. “Dao” refers to the pink peach blossoms, the symbol of Tet in Vietnam. At that time, there was a huge demanding for this color, so the street was named after that story. In the past, the street was a center for silk products. On the first and sixth days of lunar months, there were fairs that people tried to try silk products for French and Hanoi local people. When there was a turn from 19th to 20th century, the street sold not only silk but also western clothing products. Nowadays, this street is specializing in ready-made clothes. 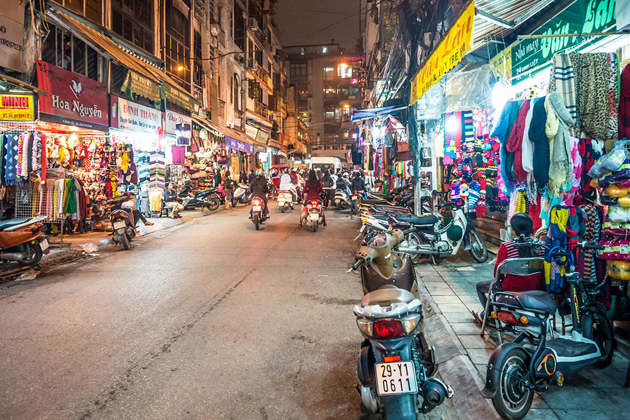 Located at the meeting point of To Lich River and Red River, Dong Xuan Market was the oldest, busiest and the biggest market in Hanoi. When the French occupied Hanoi, they required the merchants to sell goods inside the market in order to collect tax. When there was an increase in the number of merchants, the market was enlarged. There were five gates leading to the building, each gate was used for special goods. Nowadays, the market is mostly for wholesales and the goods sold here are more diverse than they were before. 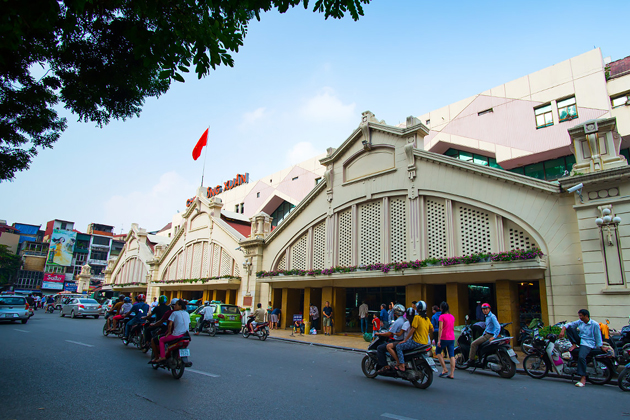 The name of Mam rooted from “fish sauces”, which is a kind of ingredients commonly used in Vietnam dishes. The street was originally located on the riverside near the day’s catch. After the sauce was made, it was stored in barrels that were made on Hang Thung Street. From 1940, a ceramics industry including memorial stone etching, tombstone and coffin appeared and replaced the fish sauce business. 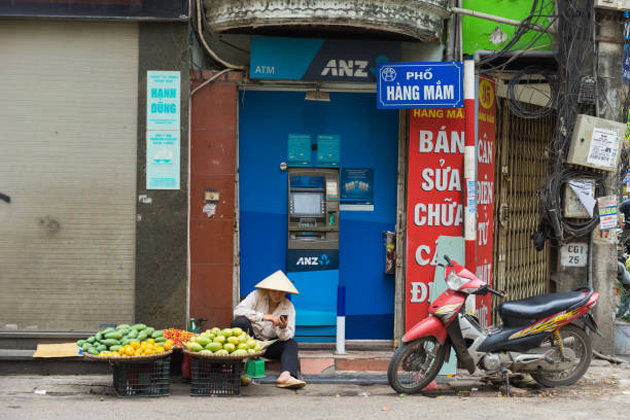 The street is a combination of two streets. Hang May sold products from rattan while Hang Ma sold sacred joss. At the end of the 20th century, the streets turned into one called Ma May. Nowadays, the street does not sell any special products. It is a common spot for tourists to enjoy their vacations in Hanoi. 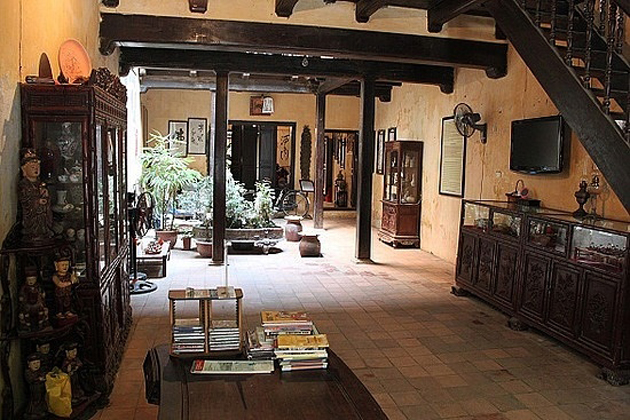 In the past, the tinsmiths were produced on this block. Originally, the craftsmen manufactured small tin cone-shape to make conical hats. Then the tins were transported to the nearby Hang Non Street where made the hats. The street also made candlesticks, oil lamps, and opium boxes. 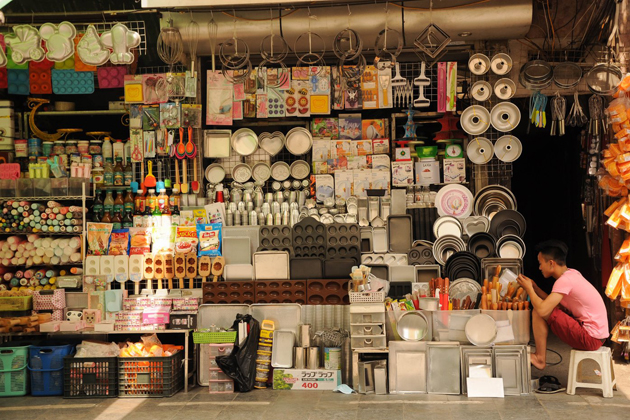 The Old Quarter is a legacy of Hanoi through a long history, but the area is facing huge challenges due to fast development. During your Vietnam vacation in Hanoi Old Quarter, you will be busy in the morning with thousands of merchandise shops and lively in the evening with a number of restaurants and bars. Spending a few days there on a Hanoi tour will not make you disappointed.