Here is a woodblock; the characters and figures are intentionally engraved the wrong side up on wood. Next is a page printed from this on paper with characters and figures now in their normal position. That is the principle of woodblock printing (xylography). A book of 1,000 pages will require 250 double-faced wood blocks or 500 single-faced ones. This is truly labor-intensive work. Until the 19th century, there were 350 woodblock printing houses in our country. Our people are studious indeed. Before the Vietnam alphabet today, Chinese and Nom characters were officially used in Vietnam. The demotic script (Nom) is a variant of Chinese characters to transcribe Vietnamese words. 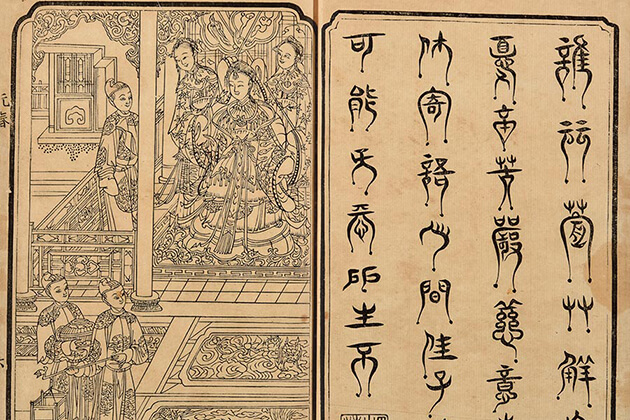 Man has many different types of scripts and handwriting. Ascribe stone statue made c. 2,620-2,520 BC, found in Egyptian Pharaohs’ pyramid royal tombs. He is making notes for a Pharaoh in the Underworld. Ancient Egyptian writing was found on the walls of the royal tombs together with pictures, or on sheets of paper made from an aquatic plant (Cyperus papyrus). The word “paper” is derived from the name of this plant. Here is a document made of papyrus paper with pictures of a dead person (left) and a two-headed weird creature beside enigmatic hieroglyphs. A piece of silk with Buddhist scriptures in Chinese characters embroidered on it (7th century). Chinese characters are ideographs that look beautiful when written on silk. There are six ancient styles of Chinese calligraphy: zhuanshu (seal character), zhengshu (regular script), lishu (a stylized ancient style of calligraphy current in the Han dynasty – 206 BC-AD 220), caoshu (a Chinese character written in the cursive hand, looking like grass), xingshu (running hand; in common use) and kaishu (regular script).

Buddhist scriptures engraved on stone (in Nepal) and to find out more, visit Go Nepal Tours website. Tibetan script stems from Devanagari (literally, “The divine script of the city”). In other countries, scripts are inscribed on bamboo tablets or written on silk… These are Greek characters written by a young woman of Tuang ethnic group. The script originated from Phoenician. Since the 3rd century BC, this script had been used in the royal tombs of Roman Emperors. Latin script is currently in common use. Formerly, there were stone books and steles inscribed in Latin. Paper was produced very early in China but not until the Tang dynasty (in the 7th century) that woodblocks were found. Formerly there were a large number of woodblock printing houses in China. 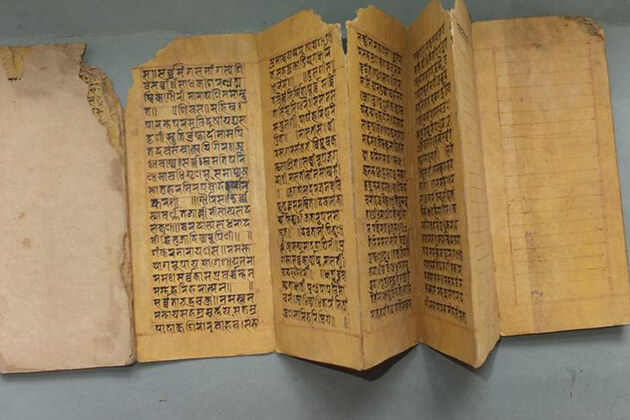 There are two types of script in Europe: Greek and Latin. Latin alphabet is now current in nearly all countries in the world. Next comes the Slavonic alphabet. 3,500 – 3,000 BC – Uruk civilization – Ideographs appeared in China. 3,000 BC – Indian script existed on stone and bronze ware. 3,000 – 2,500 BC – Egyptian writing emerged on either side of the river Nile. 1,000 – 700 BC – Phoenician script paved the way for Greek writing and present-day letters (including vowels). 600 BC – Greek and Etruscan writings were formed in Rome. Latin script first appeared. In the Middle Ages, Latin was used to copy books and bibles of the Medieval Church. Cyrillic alphabet, stemming from Greek, was again developing in the Middle East. Writing is used to record human thoughts but paper and printing facilities are needed for their popularization.

Woodblock printing craft emerged in Vietnam in the 11th century. But it only prospered from the 15th century onwards. An artisan who cut blocks for printing or “ziren” – had to memorize at least 7,000 Chinese characters. So woodblock printing is truly a labor-consuming job, and the block cutter a real learned man! And what about color printing? Let’s take an example. The folk picture “A herd of swine” of Dong Ho Village has five colors, which requires five woodblocks: four for printing colors and one for black strokes. Colors are printed first and the black strokes lastly. If the wood blocks are not superimposed on one another perfectly, the picture will be smeared. Dong Ho Villagers have practiced this craft since the 16th century and it was thriving in the 17th -18th centuries. There is a simpler and more effective technique to reduce the number of color woodblocks. It is chiefly used in the printing of Hang Trong pictures. The artist has to cut only one woodblock for printing the outline strokes. Then he uses dyes for the coloring, shape defining, and putting the finishing touches to the picture by his final lively brush strokes.

Buddhism had expanded favorably in Vietnam since the 11th century. At that time, Zen master Tin Hoc and his family members were practicing woodblock printing craft. Under the Tran dynasty, Emperor Tran Thanh Tong and the Buddhist monks Phap Loa and Huyen Quang compiled many books of Buddhist scriptures and had them printed. During their 20 years’ rule over Vietnam, the Chinese Minh had burnt all the Vietnamese books. They captured Vietnamese artisans and brought them to China. Luong Nhu Hoc, a doctoral scholar of the Early Le dynasty had furtively learned book printing craft from the Chinese and thereafter taught it to Hong Luc and Lieu Chang villagers in Hai Duong province. From then on, xylography was restored in Vietnam. 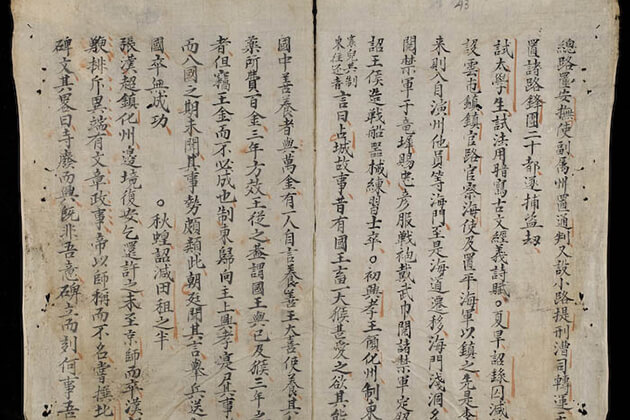 What kind of book is this? “Dai Viet Su ky toan thu” (‘A complete history of Dai Viet kingdom’), the best known ancient book compiled by Le Hy and woodblock printed in 1697 by Hong Lieu Village printers (of Hai Duong province). It is the annals of Vietnam from Hong Bang period up to 1675. Regretfully the sole original copy that remains is now lost to France! Here is an image of Buddha in the “Amitabha Buddha Scripture”, a woodblock printed by Buddhist monk Minh Hanh of But Thap pagoda in 1685. The woodblocks for printing have rotted away. The two publications above are the most precious, rare, and ancient books that remain in Vietnam. The fire of war and the hot and damp climate in our country have caused in referable damage to our ancient books.

The pictures here below belong to the Buddhist scripture “Phat thuyet dai bao phu mau an trong kinh”, 17th century, half in Nom (the demotic script), half in Chinese characters. It deals with parents’ great affection for their children with the view of teaching filial piety to the latter. Formerly, graphic stories or illustrative pictures had an age-old tradition and were very popular throughout Vietnam.

To sum up all, there were three types of xylography in Vietnam:
1. using several color woodblocks (Dong Ho pictures).
2. Using one woodblock for printing drawing strokes in black. The coloring is subsequently made by hand.
3. Using white and black woodblocks to print Buddhist scriptures.

The word “book” formerly denotes bamboo tablets bound together by means of a string.
1. Books whose binding is made at the back consist of many folded double pages; the back is sewn with threads and the cover painted with dark brown persimmon glue.
2. Folding scriptures are books with one-page folded sheets. Spreading out, they horizontally form an extremely long page; folded up, the book is reduced to one page only, e.g. “Pha Mon folding scripture”. 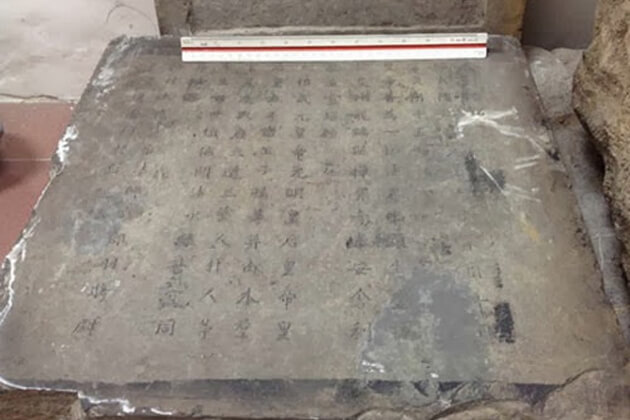 Since a majority of the Viets in ancient days were illiterate or could only read a few Chinese characters, Chinese books imported into Vietnam were abridged, simplified, and supplemented with many illustrations to facilitate their reading. Thus, Vietnamese ancient books were richly illustrated. Besides printing books, pagodas usually had pictures printed, for use in religious rites, such as elephants and horses’ pictures burnt as offerings to the dead person’s soul in one funeral rite. Today there are plenty of technical books. But formerly, when first printed in Vietnam, they were very rare. The book “Bac vat tan bien” (‘a new manual of natural sciences’) by Houston, a British scientist, was reprinted by Truc Duong Pham Phu Thu in Hai Duong province in 1877 for scientific popularization. The pictures above illustrate the principle of steam engines and trains.
We are a professional Tour company in Vietnam, please click into the link to find out more or continue to read the articles

This is a very long talisman for use in funeral rites, aimed at securing peace for the dead person’s soul and preventing harassment by ghosts. Though superstitious in content, the layout is very interesting with a human body used as the structure of a picture crammed with mystical Chinese and Sanskrit scripts as well as sophisticated carvings. It might be judged as a kind of strange book in our eyes. That was the story of ancient books, the priceless legacy of art and culture. Our books today result from the invention of the printing machine, a device for printing separate letters of the alphabet called types. The compositor sets up types for printing words, lines, and pages. No need for cutting blocks to print each page like before. This invention is valued as one of the most important ones of mankind. Today printed books are threatened by the appearance of electronic books. Importing this technique from the West, people use metal plates with designs etched in relief on them for printing. Perhaps here is the first zincograph that appeared in our country. It is now preserved at Ba Da pagoda (Hanoi) dating from the 19th century.