Cambodia is one of three destinations in Indochina vacations packages. Due to the tropical climate, the temperature is high in summer and lower in winter. The country has two seasons: wet and dry. The best time to visit Cambodia depends on the heat, rain, and also the number of tourists which is considered between November and April. However, if you want fewer people and lower price, from May to early October is not a bad idea. For more details, Viet Vision Travel provides a lot of useful information below for you to plan a perfect Cambodia vacation. 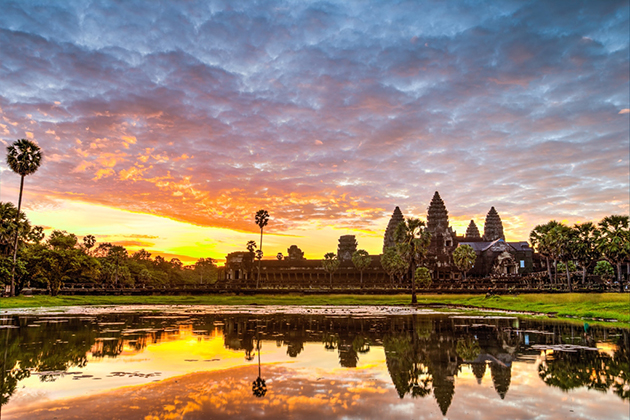 The dry season lasts from November to May which is divided into two smaller seasons: cooler and warmer. The cooler one lasts from November to February and also is the peak time for tourism with the comfortable temperatures – 24°C which is perfect to explore various attractions in the whole country from the ancient temples to the stunning beaches. The warmer season spans from March to May when the temperatures start to rise. In the peak of the season, the temperature can reach over 32°C which is suitable for sunbathing on the beaches, not exploring the city.

The wet season lasts from June through October. Due to the heavy rainfall, the Tonle Sap Lake expands this time, creating a spectacular sight to witness with lines of stilt houses on the banks of the lake. In this season, the entire country is covered by tropical lush green. September and October have the heaviest rainfall that can lead to floods in many areas. That’s why Cambodia has fewer tourists visiting and Angkor Wat Complex is really quiet during this season. 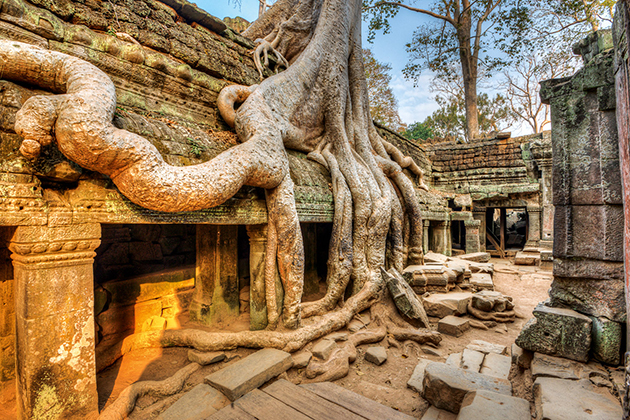 Best time to Visit some Popular Attractions in Cambodia

Best time to visit Siem Reap is from November to March when the weather is nice, cool, and dry enough to take a sightseeing tour to the Angkor Wat Complex. The temperature is around 20°C to 30 °C, humidity is about 74%, and a little rainfall that can cause dusty roads but still easy to walk through.

From April to May is the hottest time in the year that the temperature can reach over 38°C. While the wet season from May to October is the best time to admire moats around the Angkor temples with a high blue sky and lively paddy fields that can be the paradise for anyone who loves photography. However, if you want to travel to Cambodia this time, remember to follow the weather forecast to avoid heavy rainfall.

This lake provides tourism service all year around. But due to being fully filled during the green season, the time from July to December is the best one to visit, when the water level is really high to reflect the stilt houses, small boats, green mangrove, and clear blue sky.

Battambang has the climate the same as Siem Reap due to the close location. If you have a plan for this area, remember to avoid September and October because extremely heavy rains can lead to delay.

Tourists commonly visit Phnom Penh from November to February. This capital of Cambodia is warm all year round with the temperature around 22°C – 35°C divided into two individual seasons: Dry season lasts from November to April and the rainy season from May to October that the rainfall peaks is between September to October. 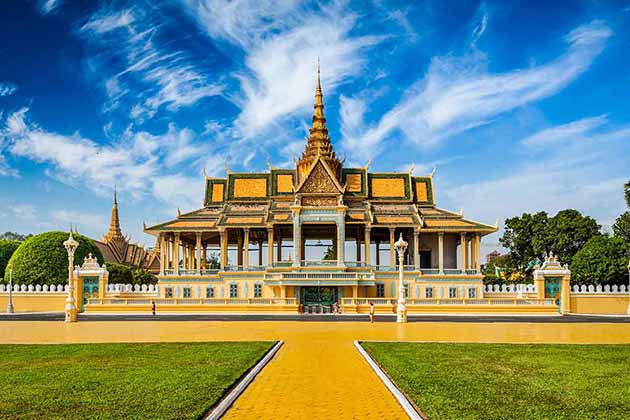 The beach land of Cambodia is best tasted during the time of November to April when the sunshine is stunning for sunbath and temperature average 24°C. With those who love scuba diving in the clear water, the perfect time is from December to June, but the temperature is higher – 27°C.

January is the peak in the tourism field of Cambodia due to the cool temperature and full-blooming dry season. It is also the busiest month that many crowds can be seen in popular places in the whole country, especially the capital of Phnom Penh and the well-known Angkor Wat Complex. The result is the highest price and missing spectacular views such as sunset through Angkor Wat and sunbath in Sihanoukville or Kep.

This month is also a good time to visit Cambodia. A little rain can appear suddenly in the end of the month that can cause delay your tour and dirt roads. In February, there is a special event that has been increasingly welcomed a few years ago – Valentine’s Day. Don’t be too surprised at heart-shaped balloons, giant stuffed bears and huge bunches of flowers seen in everywhere. 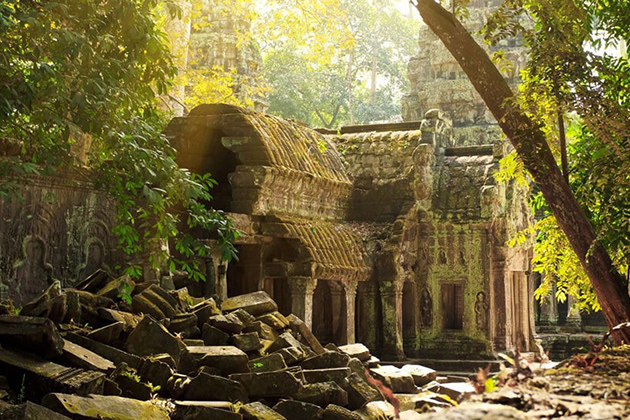 March is at the end of dry season and prepares for the wet season coming. That leads to the rising heat and more rain. This is the best time to explore the Cardamom Mountain’s jungle that easier to trek through and also avoid thirsty mosquitos (this insect is really a nightmare). Going on a boat along the river of Kampot town is also a great idea. Just avoid the countryside that is arid, dry and dusty.

Now the wet season coming! Thick muggy air in the morning, extremely hot temper – 40°C. However, this is the month of Khmer New Year, so it is still worth a trip. You can escape the heat with a visit to Kirirom just 1.5 hours from the capital which is home to sprawling pine forests.

Cambodia Weather in May

Cooler than April but still hotter than the rest of the year, May in Cambodia is not the suitable time to visit the cities but coming to the beach of Sihanoukville or Kep is not a bad idea. Escaping to the mountainous region is also recommended. 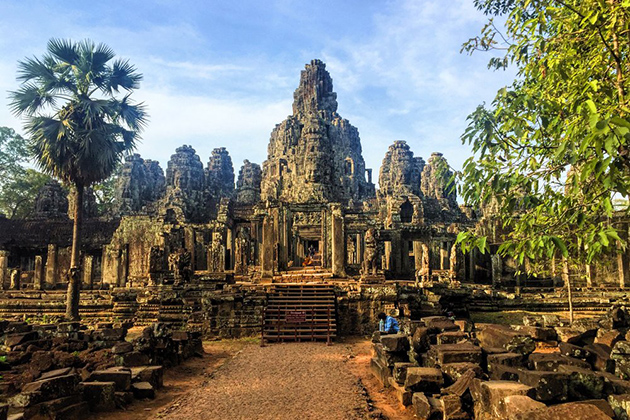 Yes, welcome the rain to Cambodia. Humidity raises to 70%, the sun dominates the sky, and mountains are suffered from heavy downpours. But with low price, low tourist numbers, Cambodia school trips are the best choice for the energetic summer.

The peak time of monsoon season – July – has ridiculous weather that changes not every day but every hour. You can see the blue sky changing into dark one in just 15 minutes. It is the clear sign that you have to find somewhere to hide immediately before it will rain in the next 30 minutes. Right after that, the sky is once again blue with beautiful sunshine, but the only proof for the last rain is flooding.

The heaviest rainfall of the year is in this month that leads to the lush green countryside and full-flowing waterways. Be sure that the light raincoat is always available by your side, or bring $1 for buying it from stalls along the streets.

Still, in the monsoon season, the rain falls all over the country leading to overflowing rivers and flooding paddy fields. Not a great time to explore the cities, but a wonderful time to admire the fantastic sights of Tonle Sap Lake. 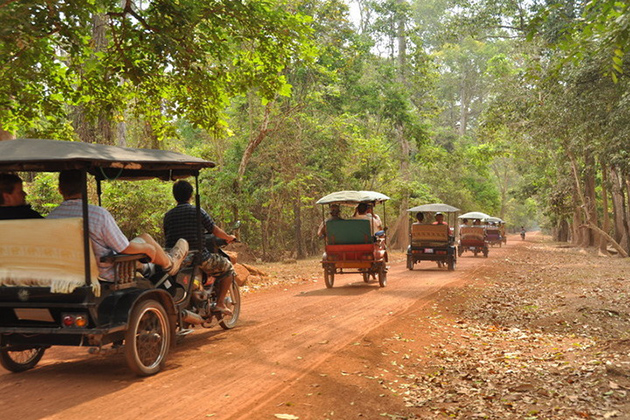 Because the dry season is coming to town at the end of the month, October is a good time to visit Cambodia, especially the waterfalls of Rattanakiri and Mondulkiri providing a fresh place to swim.

The dry season just starts, the temperature falls, humidity decreases, rain truly subsides, and the country is ready for crowds. In November, don’t miss the Water Festival – or Bon Om Touk in the later part of the month.

Same as January, December is the best time to visit Cambodia. Rain rarely falls, the temperature is cool and suitable for sightseeing activities. Every place is fully blooming this time, but you have to notice the crowd in the entire country. There are also many special events are held during this time.