Throughout the history of Vietnam, many types of architectural arts, especially sculpture, have developed and created outstanding works. Vietnam sculpture has the characteristics of culture in Vietnam combining with Chinese and Cham sculpture. Read on to have deep understandings of this Vietnamese traditional art.

When did Vietnam Sculpture Begin?

Scholars hold that it began when Vietnamese people knew how to make tools, at first in stone and later in bronze. The tiny statuettes (from 2cm to 20cm high) showed here used to be attached to objects for everyday use. The statuettes of girls or women clan heads on dagger handle look imposing and splendid. Beauty goes hand in hand with power! Is this the image of Hai Ba Trung (Trung sisters)? Today, where can we find such a beautiful and sophisticated lampstands? Fashion and jewelry are not creations today. Notice the earrings, chest bands, ankle bracelets, waistbands, and the decorative patterns on Vietnamese ancestor’s skirts – geometrical. Ornamental bands and arches are characteristic of Dong Son decorative patterns. 2,500 years ago, did they already know how to dance? No! This is a man and his wife in the course of making love. Notice the dagger is still hanging on the woman’s back. 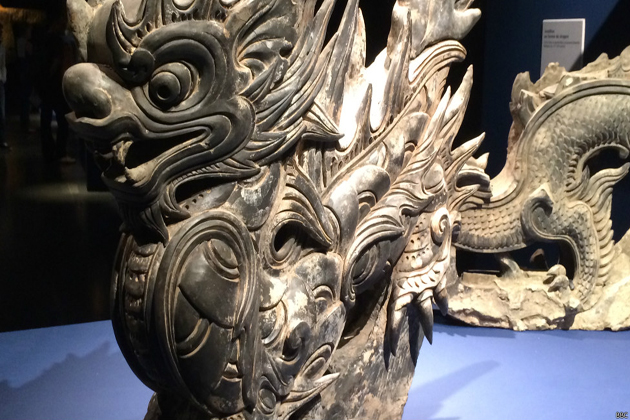 The independence period in Vietnamese history began in the Ly dynasty. Bac Ninh and Thang Long were two cultural and architectural centers. The lion statues in this period were both strong and graceful. The geometrical decorative patterns and the spirals are supple. The face of the Buddha’s warrior attendant statue looks imposing and benevolent, amiable at the same time. Most sophisticated are the sigmoid ornamental motifs. The dragon under the Ly dynasty is also known as ‘earthworm dragon’. Dragons from that time onwards began to be used as the Emperor’s official symbol. Sakya Muni Buddha, having attained perfect spiritual enlightenment, founded Buddhism at the foot of a Bodhi tree. Hence, the Bodhi tree leaf had become a familiar decorative design. Dam pagoda pillar of stone (5m in height) is the most colossal monumental stone concurrently with the stone statue of Amitabha Buddha at Phat Tich pagoda (Bac Ninh province). They are the largest monuments of this period (the 11th-12th centuries) that remain nowadays. 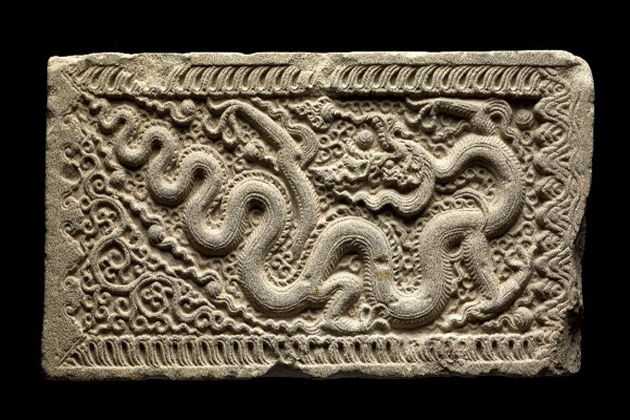 Sirens in Western mythology remind us of Oriental drum-beating fairies with a bird-shaped body. Vietnamese sculpture had very close cultural exchanges with Chinese sculpture under the Tang dynasty and Cham sculpture in the South. Changes in the situation had brought about alterations in art. Under the Tran and Ho dynasties – 13th -15th centuries – sculpture had transformed greatly. The transition was visibly observed at Thai Lac pagoda (Hung Yen province). The personages are more realistic, naive, and robust. Tran dynasty’s wooden statues are the most ancient ones ever preserved in Vietnam. Look at this simple and robust tiger and the imposing and powerful dragons of the Tran dynasty. They differ greatly from its much more elegant counterpart of the preceding Ly dynasty. 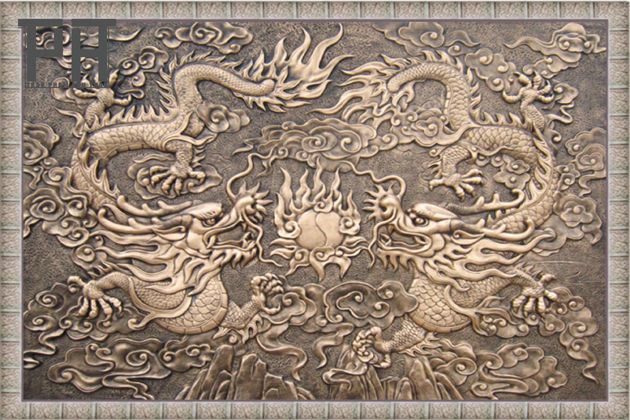 These are very likely the last influences of Cham art on Vietnamese sculpture. A hard stone, wood, and terracotta became the main materials of fine arts from the Tran dynasty onwards. King Le Thai To and his assistance Nguyen Trai attached the greatest importance to Confucianism. Buddhism ceased to be a state religion. Sculpture prone to Buddhism thus fell into the background. The dragon in this period looks majestic while the horse in the royal tomb is only 45cm high, like a toy, as plain as a stone dog at a commoner’s gate. Sculpture and Buddhism had to shift from the capital to the villages. 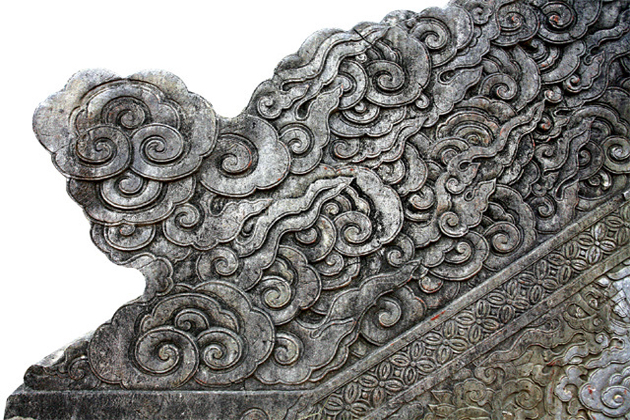 The statue on the right ushered in the golden area of village sculpture in northern Vietnam. Guan Yin statue is the image of a beautiful lady, away merciful and almighty, having the power of “a thousand eyes and a thousand arms” to penetrate all human sufferings for their salvation. But Thap pagoda’s Guan Yin statue is the unique sculpture signed with the artist’s family name (Mr. Truong) and marked with the year of its creation (1656). This is a masterpiece of the world’s Buddhist art.

In the 19th century, Vietnamese sculpture reached its peak through the royal constructions. King Khai Dinh (1885-1925) tomb with stone statues, horses, and elephants are carved sophisticatedly. His father’s tomb, King Dong Khanh,  (1864-1889) carries the distinctive Asian carvings on the front with a symbol of two carps, two dragons under the sun referring to his short life. Through their talented hands, sculptors have shown their own lines of aesthetics, creating lively artistic works.

The art of carving on the stele with poems, literature composed by the Kings also shows the unique art of sculpture in Nguyen dynasty. The typical one is Hiem Cung stele at the Tomb of King Tu Duc (1829-1883). This largest stele in Vietnam features the style of royal decorations in the Nguyen Dynasty. It is carved elaborately while the surface is embossed and engraved with the dragons and clouds

Village pagodas are really museums of sculpture. The main altars must include at least 60 statues. Their number in a single pagoda occasionally tallies up to hundreds of small and big statues. Myriads of statues in thousands of pagodas throughout Vietnam need to be protected and preserved. This statue shows the beauty of Vietnamese women. Beautiful and charming peasant girls had probably served as models for artists. And here is the charm of a “beauty queen” in former times: “Your wrist is ivory – white, sharp as a betel knife is your eyesight. To an Aglaia blossom your smile is similar, and your turban: a lotus flower that stirs”. Nothing is nobler than a mother’s love. Here is the masterpiece of an ideal Vietnamese mother with immaculate beauty, righteousness, and charity. 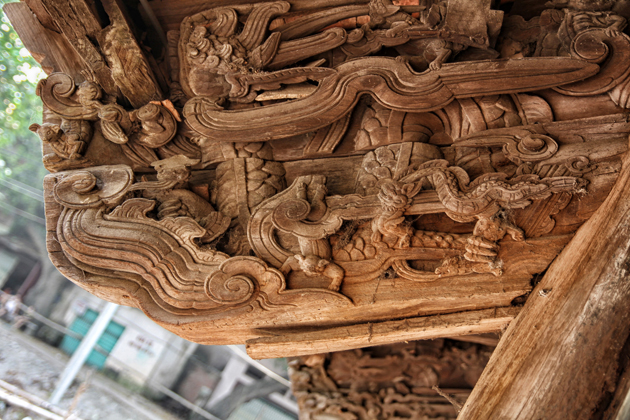 Lady White statue with her half-covered chest, a rarity in Vietnamese fine arts, the Good Pala Dharma, the Cruel Pala Dharma, and the Buddha’s warrior attendants are Heavenly gods with a stately bearing. Martial art postures and their manly strength are vividly and magnificently portrayed by the statues. There remain only collections of portrait statues of the common people in pagodas. They include chief monks in Buddhist temples, those who have rendered meritorious work to the pagodas, for example, their constructors, restorers, etc. The portrait statues are so lifelike that – it seems – they might serve as portraits in identification cards!

The fat monk is picking his ear and the lean monk is scratching his back. The statues of the Founder Monks of Tay Phuong pagoda (often mistakenly named Arhats) are also “extremely lifelike”, except the stylized ears. Outdoor statues, though not common and less imposing remain valuable works in the royal tombs. Vietnam’s ancient sculpture is truly characteristic, rich, realistic, and flowing. The colors are highly refined and charming.