Dragon has long been the legendary animal of oriented countries. Since the end of the Second World War, with the emergence of the international scene of East Asia, the media have made more and more frequent use of the dragon image in reference to China and countries under the past influence of Chinese culture. But while all those countries have in common the immemorial myth of the dragon, none of them have gone so far as to claim, as the Vietnamese do, the Vietnamese dragon as their ancestor and to give its capital the name of this mythical animal.

The Vietnamese Dragon in Legend & Culture

The perennial character of the Vietnamese dragon is a fit illustration of the ideas put forward by the American mythologist Joseph Campbell in “The Power of Myth”. He argues that “the myth is not dead in modern life” and that “myths are clues to our deepest spiritual potential”. Several Vietnamese myths, born as early as the Bronze Age (1st millennium B.C.) in the Red River basin, marked the formation of the Viet cultural and national identity before the impact of Chinese culture: the ancestral Dragon, the demigod of Giong, victor over northern invaders, the Mountain God defending the people against the floods of the Red River. Over the last three millennia, those persisting myths have constantly inspired history.

Why the Viet have always called themselves “con Rong chau Tien” (children of the Dragon and the Fairy). This legend will be the answer. Long, long ago there lived in Linh Nam (Country south of the Mountain Range on the Border – ancient Vietnam) a magician king called Kinh Duong Vuong, who could walk on water as well as on terra firma. One day in the course of a pleasure trip on a lake, he met Long Nu (the Dragon maiden), the daughter of the Long Vuong (the Dragon King of the sea), and married her. From their union was born a Herculean son who later mounted the throne with the name Lac Long Quan later becoming the Dragon King of Lac Viet – an ancient name of Vietnam)

The Victories of Lac Long Quan

With the power of Dragon from his mother and magic from his father, Lac Long Quan traveled all over Linh Nam to restore peace and order troubled by evil monsters. In the South Sea, he killed the gigantic Fish Demon, and then cut it into three parts. One of them, the tail, became the present-day island of Bach Long Vi (Tail of the White Dragon) in the southern part of Ha Long Bay. After that, Lac Long Quan killed the Nine-tailed demon which often appeared in human form and seized young women and carried them to its caves to rape and murder. The destruction of the demon and its cave was turned into the present-day West Lake in Hanoi. Another exploit of the Dragon King was the overpowering of the demoniac Evil Tree, which later had to fly to the southwest.

The Legend of a Sack of a Hundred Eggs

At the time a northern chieftain invaded the country. With him was his daughter named Au Co. Lac Long Quan drove him and his troops away and took her as his queen. Later his queen bore a sack containing a hundred eggs. These, after seven days, hatched a hundred babies. That is the reason why Vietnamese people often call each other ‘’dong bao” (born from the same sack). They eventually grew up into strong and handsome youngsters. At that moment, Lac Long Quan told his wife: “I am of the race of Dragons living in the sea. You are of the race of fairies living in the mountains. We have no choice but to separate. You bring fifty of our son to the mountain. I will rejoin the sea with the fifty others”.

The divine spouses thus went their separate ways and created two domains: one with a population living on the coast and the lowlands, the others with a population living in the highlands. The later learned from their mother the art of clearing the slopes to grow rice and to raise mulberry and silkworms. The eldest son, who was among those accompanying the father to the lowlands, eventually ascended the throne with the regal name of Hung Vuong who inaugurated a line of 18 sovereigns called the Hong Bang Dynasty beginning the period of the 4000-year history of Vietnam. Since then, Vietnamese people have always proudly called themselves “con Rong chau Tien”.A temple was built to their memory in the province of Phu Tho on the left bank of the Red River.

Legend of con Rong chau Tien and its effects

The myth of the Dragon and the Fairy was an effective reference in the struggle against foreign aggressors Chinese and French. Many Confucian scholars and modern militants used that reference to mobilize the masses. Thus, in the 6th century, under Chinese rule, the resistance hero Trieu Quang Phuc established a guerrilla base in the swampy area of the Lake that came-into-being-overnight (Dam Da Trach). This is the place where the demigod Chu Dong Tu took his flight to heaven. A Hung King was believed to come down from heaven, riding a dragon, and to present the national hero with a claw of the fabulous animal, a symbol of his invincibility and legitimacy.

In the late 1920s, Viet Nam Quoc Dan Dang (the Vietnamese nationalist party) evoked the Dragon-Fairy stock in its appeal to the people: “We are children of the Southern Country of the Lac Viet race, of the Hong Bang Dynasty. How could we resign ourselves to being oppressed?”

In 1954, following the victory over French colonial troops, President Ho Chi Minh, before the temple dedicated to the Hung kings, addressed the troops about to liberate Hanoi in these terms: “The Hung kings had the merit of creating our country. We, their descendants, must defend it”. At the time, it was a myth he cited because the archaeological excavations identifying the Bronze Age (Dong Son culture) with the epoch of the Hung kings were to be conducted only starting from 1959.

The myth of the Dragon and the Fairy – with an ornithological tinge and a totemic connotation would find a scientific justification. It reflected the process of formation of the Vietnamese people, whose conquest of the Song Hong (the Red River) Delta was relatively slow to come: it was only possible when the population, who had first settled in the foothills, had grown numerous enough to launch into the building of river and coastal dikes. The myth also hints at the complementary character of the populations of the lowlands and highlands. The dragon is thus part of the cult of fertility for it brings the rains that produce bumper harvests.

The Vietnamese Dragon in History

In 1010, King Ly Thai To left Hoa Lu (Ninh Binh province) and chose Thang Long (the rising dragon) as the capital of Dai Viet (Vietnam’s old name). Then the dragon became the noble symbol, the power of the royal family, and the religious (Buddhism). It is embodied in a sleek, sophisticated, artistic complex with a complete layout and unique style which can be seen in the décor of architecture. 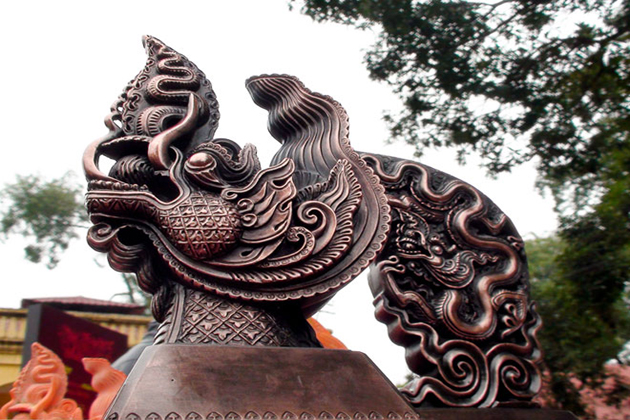 The Vietnamese dragon in this period had many differences from the previous one. The body of the dragon was bigger, stronger. Horns appeared on the dragon’s head and ears. The majestic shape of the Vietnam dragon brings new meaning to the dynasty encouraging the spirit of all the people to fight against 3 invasions of Mongolia. 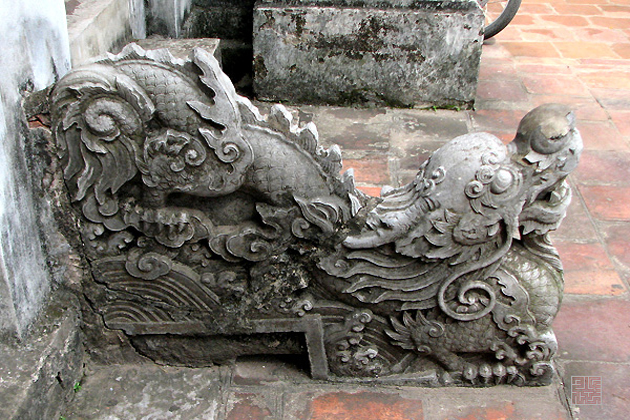 In the Nguyen Dynasty, the Vietnamese dragon still kept the beauty of tradition combining with modern art from Western countries. It was removed the verbose details of its head and body; replaced by the simple ones which make the dragon delicate and more luxurious. The dragon of the Nguyen dynasty remains relatively in temples, pagodas from Hue to the Red River Delta.