Laos, a South-east Asian country, is well-known for the antique temples and pagodas together with monthly traditional festivals so that you can join some of them no matter when you visit this nation. Festivals are one of the most unique and typical factors to present the beauty of local culture and help you acknowledge the native customs and people. On these days, most of the stores close to celebrate the national festivals; however, you will, instead, be immersed in the lively and bustling atmosphere everywhere. Let’s learn about List of all traditional festivals in Laos and see which one you will participate in during your Laos tour! 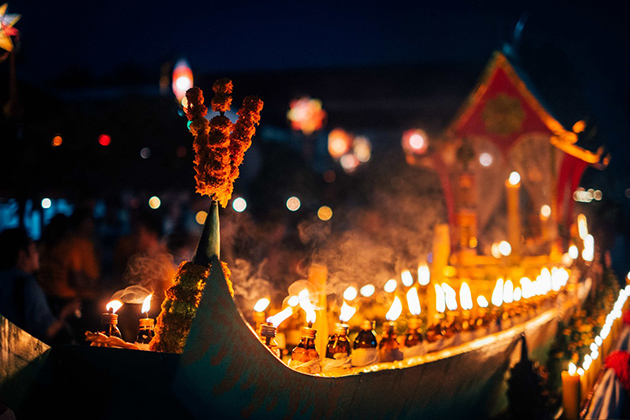 Bun Pha Wet: The festival is a religious event throughout the country and annually takes place on different days of the month. The Laotian will invite some of the close friends and relatives from other areas to their home and enjoy the festival together. 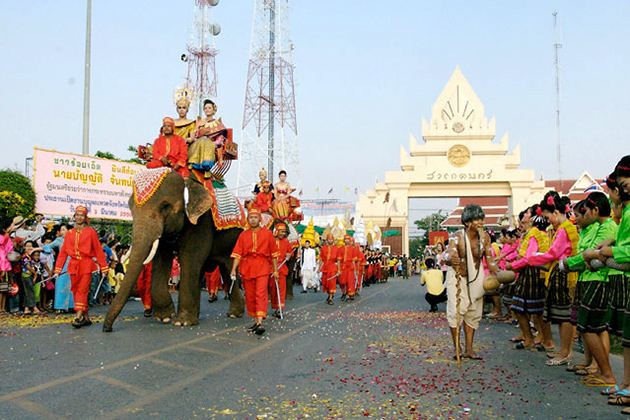 Bun Pha Wet is held with the purpose of commemorating the Buddha Jataka. The stories of his life when he was still the Prince named Vestsantara have been told in all of the temples and pagodas in Laos. It is also the time for the monks to be honorably ordained after a devoting year. Coming Laos in January, you will be deep in the sacred atmosphere; and if you have a chance to visit a local home, it will be great time to enjoy the traditional food and cozy ambiance with the host’s family.

Magha Puja: Taking place on the fifteenth day of the month, Magha Puja is a traditional festival that was held to honor a religious event when the Buddha picked up that day to indoctrinate Buddhism to a thousand monks. It is a very important national event for the Buddhist on which they hold the candles on their hand and walk around the temples in a long parade as a way to worship. Moreover, the local people also make offerings such as rice, flowers, and incense to the pagodas on this day. Joining the festival, you will be immersed in religious performances and chanting to pray for peace, health, and happiness.

Wat Phu: Being hold at one of the most ancient temples in Laos – Wat Phu, the festival named after the temple takes place annually on the middle day of March in the lunar calendar. During the festival, a diversity of ritual activities such as recitals and chants together with entertaining games like duck catching, petanque competition are exaltedly organized, which attracts the participation of the Thai and Cambodian people. All of the festive ceremonials aim at respect for the agricultural industry that provides the main food source to the residents.. 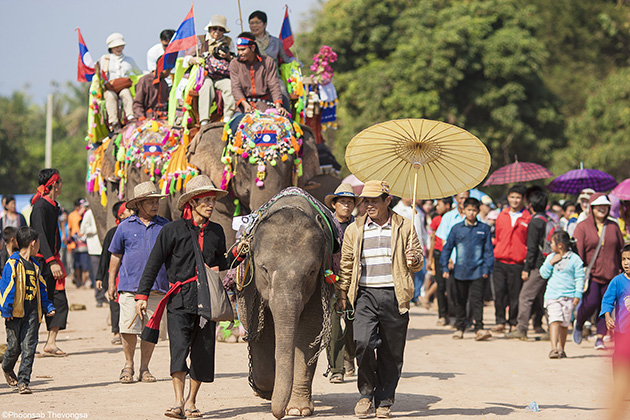 Elephant Festival: Laos is known as “A million elephant” land so this festival is the most unique event of the nation to help promote the campaigns of protecting elephants – the kind of animal is being endangered in nature. In the ceremony, elephants have become the “main characters” that are highly appreciated by the people. They are given a shower, then leading the long parade to go around the village. There are also elephant baci ceremonies and mahout demonstration during the festive days. Besides, a contest for over 60 elephants together with traditional games and night markets that are honorably held in this special event is an interesting experience for the tourists.

Boun Khoun Khao (Rice Festival): Being one of the most important annual events of Laos, Boun Khoun Khao reflects the respect for a prosperous life thanks to the agriculture. The festival usually takes place in March, but mainly depending on the lunar calendar. If you visit Laos these days, you will be overwhelmed by the solemn atmosphere when experiencing the traditional ceremony in small villages and ancient temples. The symbolic image of this event is the local people sit around Pha Khuan – a giant bunch of flowers in vivid colors and creative decoration, waiting for the village patriarch for being tied their wrists by a white string and being prayed for happiness. 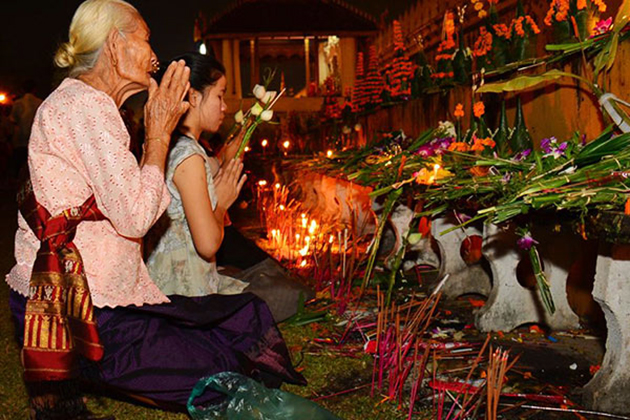 There are a variety of savory home-made dishes that are served on these days such as deep-fried Mekong fish, papaya salad and rice wine. All of the food’s ingredients are naturally from the daily environment with the meaning of appreciating “Mother Nature” the bountiful harvests. Besides the religious activities, the Laotians also perform uniquely traditional songs and dances.

Boun Pimai (Laos New Year): Like New Year ceremonies of the countries all over the world, Laos New Year or Boun Pimai is an extremely solemn and meaningful event that is being looked forward by the whole nation. It lasts for three days on which all of the Laotians are off work and all the stores are close to celebrating this big ceremony. On these days, the local people go to the pagodas, giving the Buddha statues a shower with fragrant water, then walking on the streets and taking part in the water festival to wipe out the sorrow in the previous year and pray for a lucky new one. 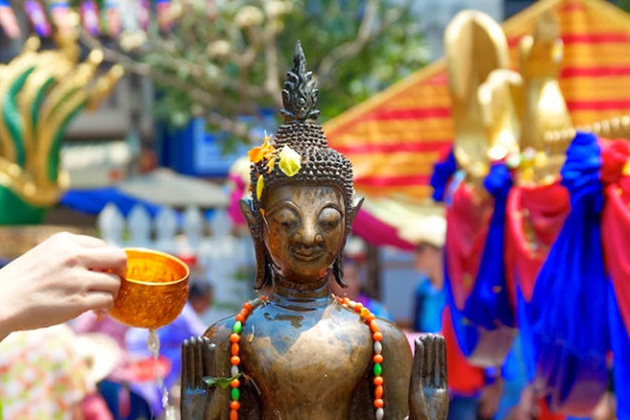 After that, in order to honor Buddhism and the Mekong River – which help cultivate a bumper crop, the residents gather along the bank of Mekong River to wish each other best luck, health, and happiness. In addition to ritual customs, Laotians also dance, sing in colorful Laos traditional dress, and hold some traditional contests such as beauty contests and boat race, etc.

Laos Festivals in May

Visakha Puja: To celebrate the birthday, the enlightenment, and the death of Buddha, the Lao people will recite the Buddhist scriptures, indoctrinate and hold the lantern parade in a solemn atmosphere from the most respectful frame of mind. 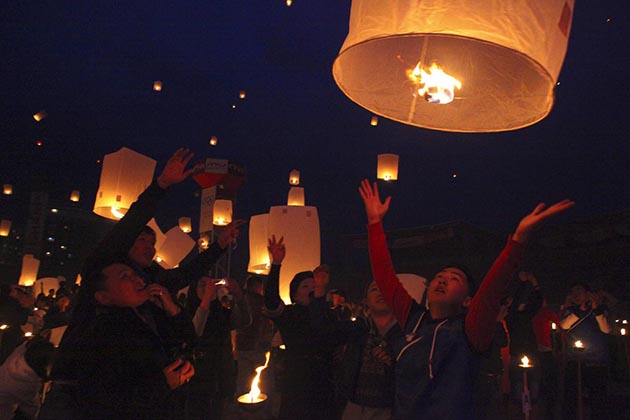 Boun Bang Fai (Rocket Festival): Known as the most special festival in Laos, Boun Bang derived from rain festival, nowadays, is on the same day as Viisakha Puja. It may take several weeks to prepare for the ceremony with the attendance of different communities. During the festival, there will be a lively picture of the local people in colorfully traditional clothes singing and dancing happily. The most outstanding activity is a bamboo-made missile launch to pray for luck, health, happiness, and favorable rain. It is supposed that the higher the missile flies, the better luck so that you will be attracted by exciting uproar from the festival participants after the missile has been launched. If any rockets are not able to fly, the team leader will have to drink Satho (rice wine) as a punishment. In addition to the festive activities, a lot of delicious traditional foods are served to all of the guests.

Children’s Day: It is a special day for Laotian children when they have their own day to celebrate and be highly cared about. There are many meaningful projects for the children and tourists to take part in, from the entertaining activities to Laos educational trips for the rural kids who were born in a poor family. They can dance, sing or join cultural and educational classes during this day. Besides, many organizations also raise funds to hold the campaigns for children’s rights, helping the kids have better lives in not only physical but also mental cares. 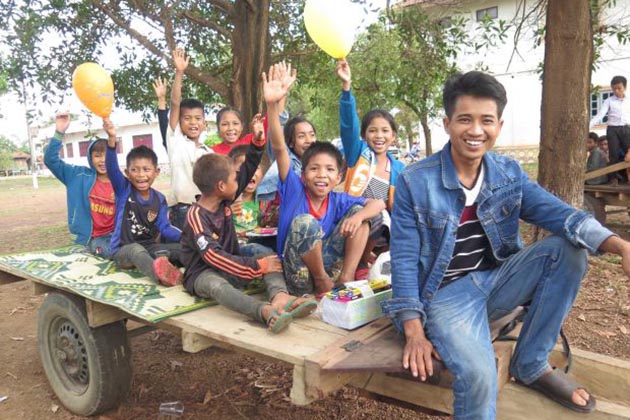 Boun Asalahaboucha Boun Khao Phansa: Also known as “Buddhist Lent”, the festival that starts in July and lasts three months has been the propitious days for the Laos men to become a monk. During this time, the monks are not allowed to sleep outside the pagodas and stay there to be deep in the contemplation and pray for the peace, prosperity and happiness of the nation. The local people, therefore, make offerings of food in the morning called “tak bat” to the monks. Besides, there are some ritual activities and games such as praying for rain, candlelight parade around the temples and drumming competitions, showing the unique Laos culture and customs. 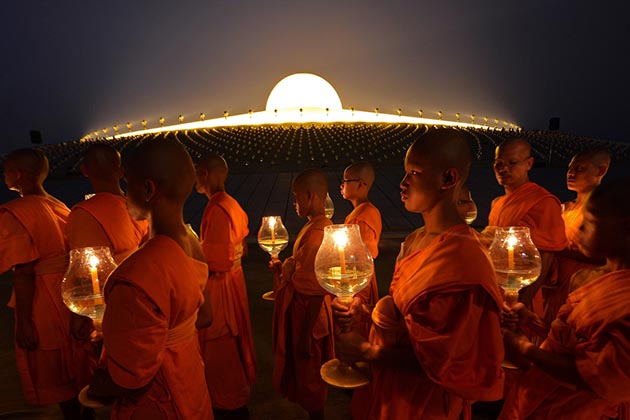 Boat Racing Festival: After Boun Asalahaboucha Boun Khao Phansa, the Laotian jubilantly hold boat racing ceremony – the event to honor the physical health of the people in producing life. The competition is an outstanding event in Luang Prabang that attracts foreign tourists and the residents throughout the country. After the home-made rockets are launched, the race starts in the bustling applause and cheers. On the river, the boats forge ahead by the strong union of the racing teams, expressing the wonderful power and community-based spirit of the people. There are many teams participating in the competition in different rounds, each one has fifty members, rowing on the hundred-meter-long river. The best team is chosen based on the speed and being praised by the whole audiences. Boat Racing Festival has become an annually indispensable event that highlights the unique cultural beauty of Laos. 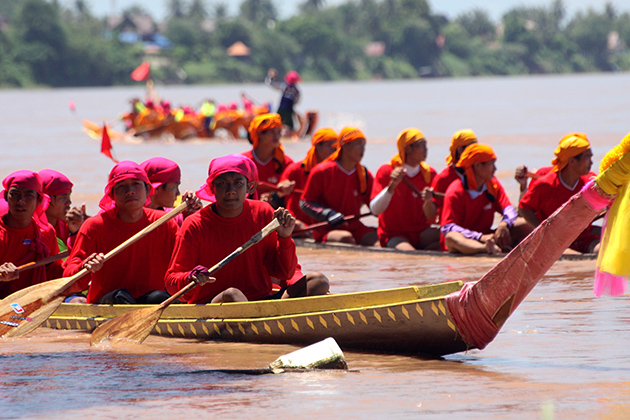 Boun Khao Salak: In September, this ceremony is a sacred day for the Laos people to commemorate the dead. They will make offerings to the monks with a piece of paper in which there are some words to the ancestors. Most of the people go to the pagodas and prefer to do “good merits” on these days as the way to accumulate good works for the family and the dead. 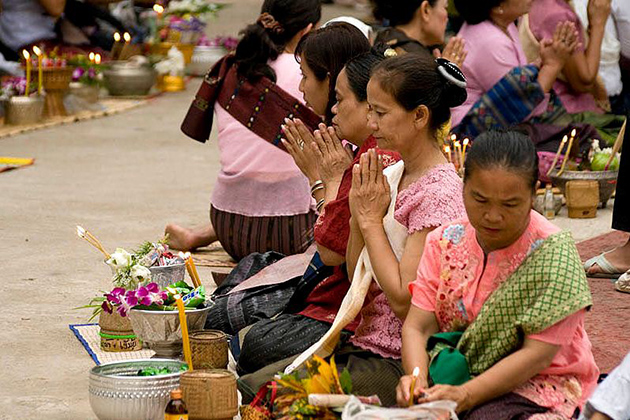 Boun Ok Phansa: If Boun Khao Phansa is the opening days of “Buddhist Lent”, Boun Ok Phansa is the mark of ending this ceremony. After three months when the monks stay and meditate in the temples, the local people will come and make offerings for the monks. Joining the festival, you will be immersed in the sacred atmosphere of candlelight processions around the pagodas. Moreover, the Laotians also row the boats that are beautifully decorated with flowers, luminous candles and incenses on Mekong River. One indispensable activity is the boat racing that shows “river spirit” of the Laos people to Mekong River. Boun Ok Phansa is supposed to be an important event for the whole nation to send the bad luck and sorrow away to the river. 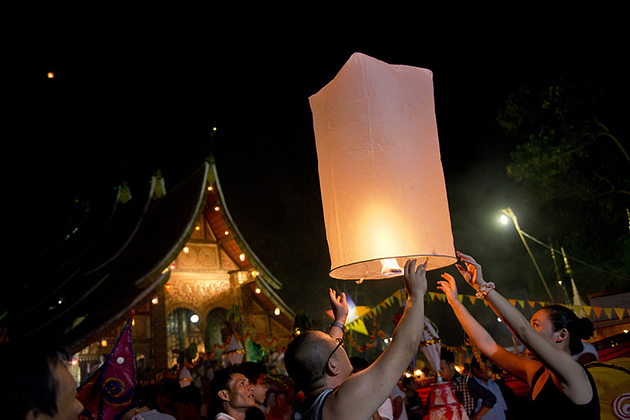 That Luang: Being one of the biggest national holidays in Laos, That Luang festival takes place in November, which attracts a lot of national and international tourists gathering in That Luang (located in Vientiane) – the oldest temple in Laos. The festival lasts three days of religious activities and one week of festivities. On these days, the Buddhists from different areas come to Wat Si Muang – an ancient temple in Vientiane and join the flow of parade to That Luang, making offerings to the monks to accumulate the good works as a belief of having the better life in the next incarnation. The people with incenses and candles on hands go around the temple three times to show respect for Buddha. In addition, there are a lot of impressive music and dancing performances that reflect artistic, religious and cultural values of the Laos community. 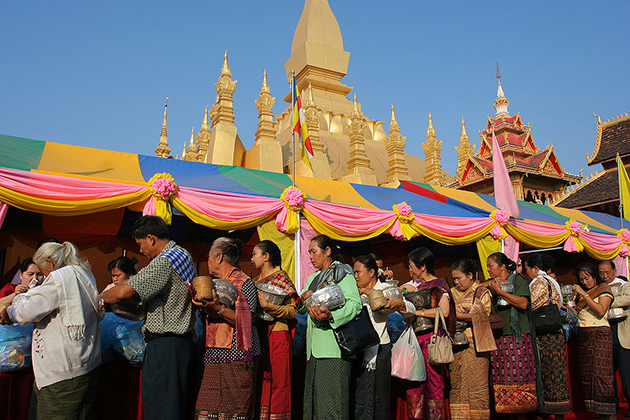 National Day: The National day is solemnly held on the second of December to memorize the foundation of the Laos People’s Democratic Republic in 1975. This is a big event for the whole nation when every house has one national flag hang up. It is also the time for a lot of processions, parades and formal speeches to be presented on this public holiday to praise the heroes who founded and have protected the country along with the history. Coming to Laos at this time, you can join the zealous atmosphere and be one part of the long parade in the beautiful land. 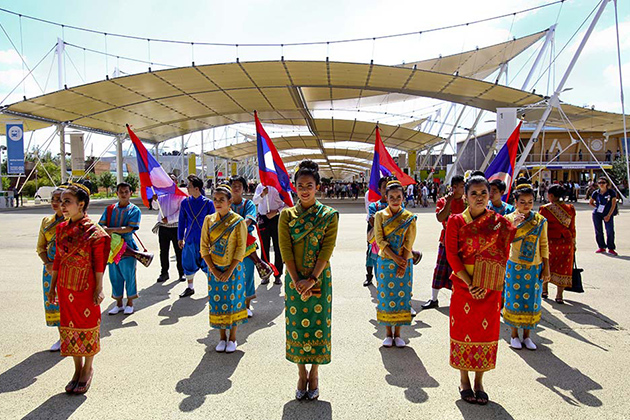