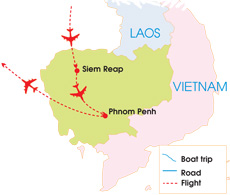 Later today we travel 6km (4 miles) north of Siem Reap to visit Angkor Wat. Angkor Wat is surrounded by a gigantic man-made moat, the symbol of Nirvana. The beauty and state of Angkor Wat’s preservation is unrivaled. It was built in the first half of the 12th century with an architectural masterpiece.
End of the day, we both enjoy the sunset view at Prasat Chroung, on the wall of Angkor Thom and drink a bottle of champagne and fruits. Then we return by royal boat through the ancient moat and transfer to hotel.
Welcome dinner with Apsara Performance will be served at restaurant. Overnight in Siem Reap.

Day 2: Angkor Thom and Ta Prohm (B)
This early morning today, we enjoy sunrise over Srah Srang, a man-made lake used as the Royal bath with a cup of tea, coffee or biscuits in the Angkor National Park. Then we travel to the picturesque Ta Promh temple which has nearly disappeared in the jungle and the remains overgrown, an oddly haunting and exotic scene. The magnificent roots of a tree, pushing between the huge stone blocks of the temple in a sort of embrace, evoke feeling that makes all of us remember forever.
Optional choice that, we can go back to hotel for our breakfast or have at the Tanai temple which is in the middle of the jungle.

Later today, we explore Angkor Thom, the last capital of the Khmer Empire. We enter and exit through the Western Entrance, where the four faces of Buddha and the flanking statue of gods and demons can be seen. Further, we visit the Terraces of Elephant, the Leper King & the Baphuon temple just re-opened to the public on 2011 June after 50 years of restoration. The last but not least is the main temple of Bayon, who has similarities of the 216 gigantic faces of the temple’s towers to other statues of the king, which has led many scholars to the conclusion that the faces are the representations of Jayavarman VII himself, and others have stated that the faces belong to the bodhisattva of compassion called Avalokitesvara or Lokesvara.

Day 3: Chongkneas floating village – Fly to Phnom Penh (B)
This morning, we visit floating village of Chong Khneas where the the fisherman and fishmongers barter their products in the busy traffic on the water ways, the fisherman return to the dock from fishing, young students row their wooden canoe to the floating school, boat trader sell their vegetable or meats to the habitants of the village, who live a simple and happy life, followed by our seasonal fruits basket….
Later today, our awaiting vehicle will transfer us back to the airport for our flight to Phnom Penh where a local tour guide and driver waiting and take us to hotel. Relax and overnight in Phnom Penh.

Day 4: Phnom Penh – City tour (B, L)
Today we visit all the highlights of Phnom Penh city with the Royal Residence, the Throne Hall or Vinichhay Temple and the Chan Chaya Pavillon including Wat Preah Keo (Silver Pagoda) belong the Royal Palace. After that, we walk down to the National Museum where we visit the galleries of Khmer Art.

Relax for lunch then we keep on our journey to the Choeung Ek killing fields and the Tuol Sleng genocide Museum where is about 16 km from the center. This former high school in the suburbs of the capital was converted to a detention and torture centre – known as Toul Sleng or S21 – by the Khmers Rouges when they came to power in 1975. A genocide museum was established at Toul Sleng after 1979 and today it remains as it looked when abandoned by the Khmers Rouges. The pictures of hundreds of faces of those tortured there line the walls inside the old school. Most of the 17’000 people detained at Toul Sleng were eventually transported to Choeung Ek, a mass gravesite known to the locals as the Killing fields after the popular movie of Roland Joffre. Choeung Ek also serves as a memorial to those killed under the Khmers Rouges rule.
Overnight in the hotel in Phnom Penh.

Day 5: Departure (B)
Today our awaiting vehicle will transfer us back to the airport for our flight to home. Trip ends. 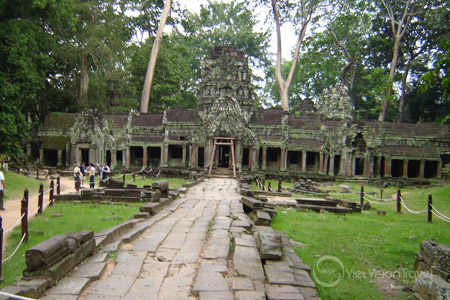 This is the best option for your short trip exploring Cambodia within 4 days. It covers the main highlights of Cambodia such as Angkor Wat, Angkor Thom, Ta Prohm, Tonle Sap lake in Siem Reap and the Capital city of Phnom Penh. The trip allows us to maximize your visit during such a short time... 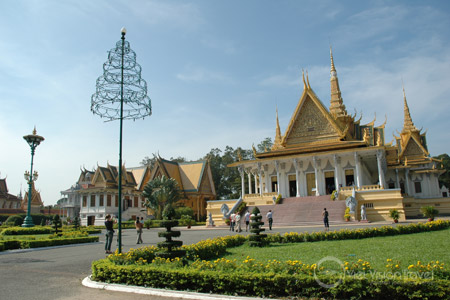 Cambodia in Close Up Tour – 7 Days

An interesting country with its people, history and lifestyle will be discovered within a short 7 day trip. From the ancient capital of Khmer Empire to the history war of Phnom Penh and a sandy beach of Sihanoukville, all makes visitors have fun, good and memorable experience. Cambodia in Close up. 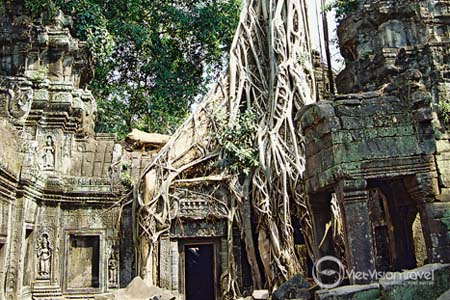 For your first and quick visit Angkor Wonder, the 3 Day Angkor Wonder is designed to visit all main temples such as Angkor Thom, Angkor Wat, Ta Prohm and a half day relaxing with nature of floating village in the big TonLe Sap Lake. Come and enjoy with friendly Khmer’s people and culture… 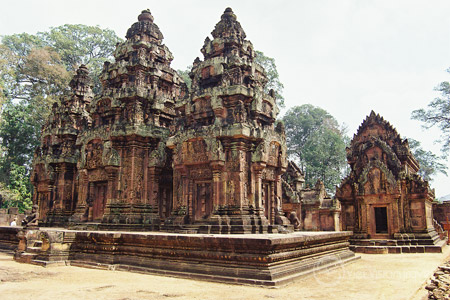 This tour is privately designed for visitors who visit Siem Reap second time. No more Angkor Temples but experience Khmer people by another way. From the ancient capital of Khmer Empire to the daily life of Khmer nowadays, all make visitors’ time worth. Welcome back! 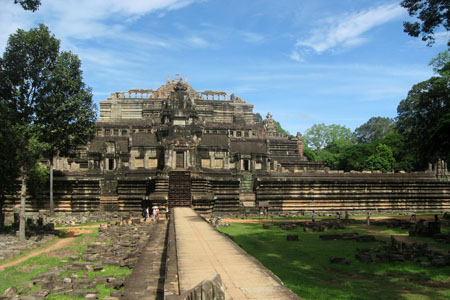 This 4 day trip allows us to explore the most interesting parts of the majestic Angkor temples. We take the opportunity to visit Tonle Sap, the largest lake in Cambodia and explore the daily lives of the people who live in the floating village on the lake. This trip will let you to experience the amazing differences of Cambodia first hand.