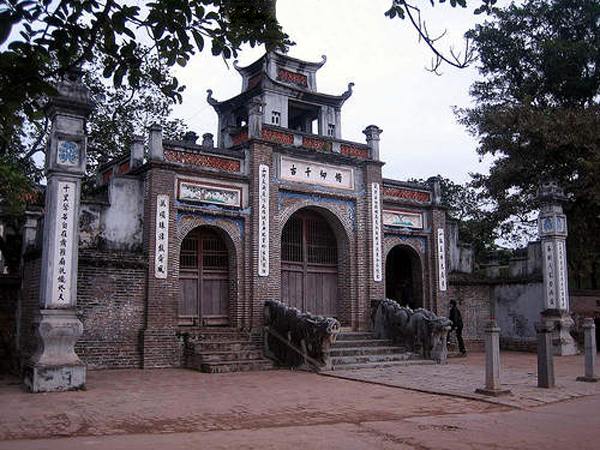 Today there is little left of the original city, but a half-day trip to Co Loa Citadel is worthwhile for your excursions in Hanoi, both for the historical site and for a chance to see the attractive and relatively prosperous farming villages amid which the Citadel is set.
King An Duong built his capital within three concentric ramparts which spiraled like the shell of a snail – Co Loa means ‘Old Snail’ – and they are still discernible today. Close by the Citadel’s for-mer south gateway, a venerable old bo tree shades My Chau Temple (Den My Chau), dedicated to An Duong’s daughter, the princess My Chau; inside is a headless stone statue said to represent her.
About 100m (328ft) further on, An Duong Vuong Temple (Den An Duong Vuong) is dedicated to King An Duong, a 16th-century bronze statue of whom rests on the main altar, while a subsidiary altar is dedicated to the magical Golden Turtle Kim Quy. The terrace of this temple rests on six lacquered pillars that support a long roof with gracefully upswept eaves.

The Perfume Pagoda
The Perfume Pagoda A day trip from Hanoi to Perfume pagoda is easy and worth. The justly famous Perfume Pagoda (Chua Huong) is set in the Huong Tich Mountain (Mountain of Fragrant Traces) some 60km (37 miles) south of Hanoi. The name in fact is the collective one given to a number of Buddhist temples and shrines largely established by the Trinh Lords in the 17th and 18th centuries. This area, comprising about 30 sq km (12 sq miles), was the site of some bitter uprisings against the French colonialists and, as a result, several buildings were destroyed in the late 1940s. Fortunately, the area retains much of its scenic splendor. 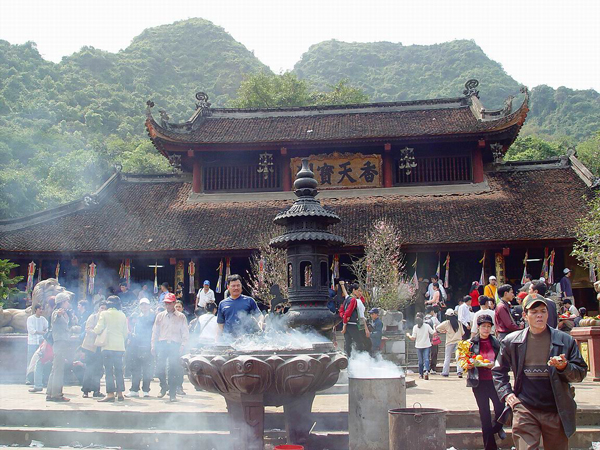 The most enjoyable way to go is by boat from Duc Khe wharf on the Yen River, a trip to Perfume Pagoda easily organized through any tour company in Hanoi.
The river trip through outstandingly beautiful countryside takes around 2 hours, after which it is necessary to walk about 4km (2/ miles) to the temple complex (about 90 minutes). This excursion from Hanoi will easily take up an entire day.
1 Day Perfume Pagoda Tour

Thay Pagoda
Thay Pagoda Just 25 km from Hanoi center, a trip conmbine several places nearby Hanoi such as: Thay pagoda, Tay Phuong Pagoda and Duong Lam village is really worth for your Hanoi visit. Similarly well worth visiting is Thay Pagoda (Chua Thay), about 40km (25 miles) southwest of Hanoi. Thay or ‘Master’s Pagoda’, also known as Thien Phuc Tu or ‘Heavenly Blessing Pagoda’, is dedicated to Thich Ca or Sakyamuni Buddha (the Gautama Buddha, bom in 536BC). To the left of the main altar stands a statue of Tu Dao Hanh, the master after whom the pagoda is named. To the right stands a statue of King Ly Nhan Tong (1072-1127), who is said to be a reincarnation of Tu Dao Hanh and during whose reign the pagoda was founded. 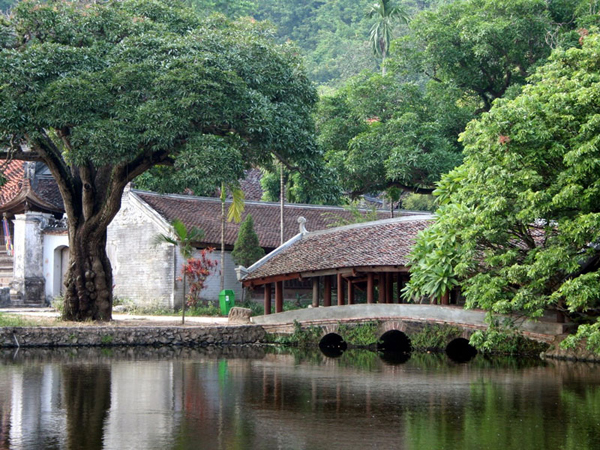 Thay Pagoda contains more than 100 religious statues, including purportedly the two largest in Vietnam – clay and papier-mâché giants which weigh more than 1,000kg (2,2051bs) each. Tu Dao Hanh is said to have been a master water pup- peteer, and demonstrations of this ancient skill are given at the temple during the annual festival on the fifth to seventh days of the third lunar month.

Tay Phuong Pagoda
Tay Phuong PagodaTay Phuong Pagoda (Chua Tay Phuong) is also located near by the Thay Pagoda in Hanoi. The pagoda lies some 6km (4 miles) to the west – hence its name, which means West Pagoda. Perched on top of a hill said to resemble a buffalo, Tay Phuong is a small pagoda dating originally from the 8th century, which is notable for its collection of more than 70 fine jack-fruit wood statues, including figures from both the Buddhist and Confucian pantheons. 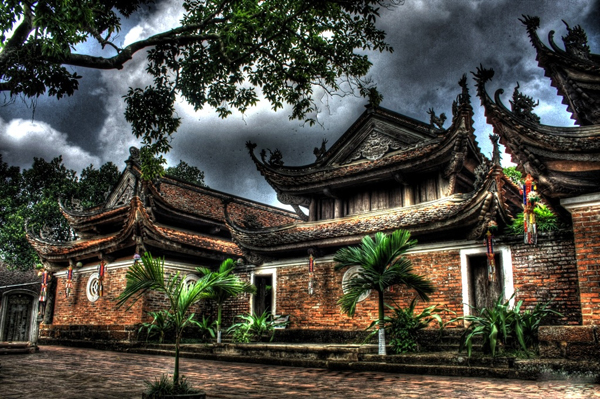 Hanoi Handicraft Villages
The Red River Delta is well known for the skills of its artisans, and several small villages within easy reach of Hanoi are traditionally associated with particular crafts. About 13km (8 miles) southeast of the capital on the left bank of the Red River, Bat Trang is renowned for its blue and white ceramics – a tradition thought to date back to the 15th century when Muslim traders first introduced cobalt. There are approximately 2,000 families in Bat Trang, managing more than 800 kilns. The specialty of the 30 or so acknowledged ‘master potters’ is reproduction antiques.
Other craft villages in the Hanoi region include Van Phuc, about 8km (5 miles) southwest of the capital on Highway 6 to Hoa Binh, famous for its silk production; So, a noodle-producing village about 12km (7’A miles) further out on the same road; and Dong Ky, a wood-carving village about 15 km (9 miles) northeast of the capital on High-way 1 to Bac Ninh. Visitors are most welcome at these craft villages, and most tour companies in Hanoi are able to arrange half- or one-day tours. 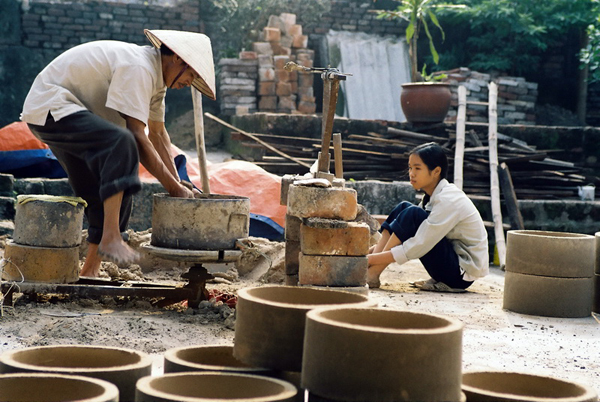 Soc Son & But Thap Pagodas
If you are flying out of Hanoi’s Noi Bai Airport and need to kill a little time in the vicinity, consider visiting Soc Son Pagoda (Chua Soc Son), dedicated to Thanh Giong, a legendary hero who defeated the Chinese during the time of the Hung Kings. The temple, set beside a tranquil lake against pine-clad hills, is about 35km (22 miles) to the north of the capital, on Highway 3 to Dong Anh, just north of Noi Bai. But Thap Pagoda (Chua But Thap) is another quiet and seldom-visited temple, which dates from the 17th century and is on the south bank of the Duong River, about 25km (16 miles) east of Hanoi to the south of Bac Ninh. 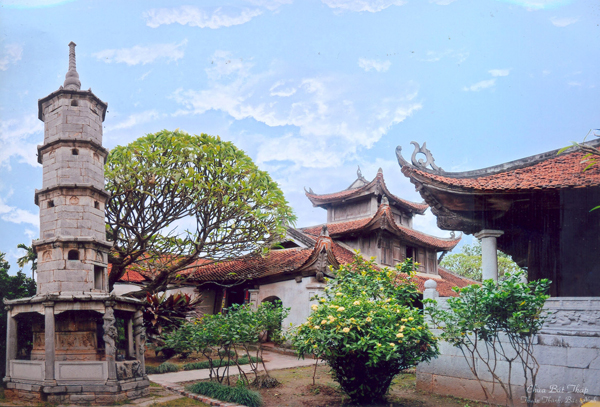 Hoa Lu Ancient Capital
finally, mention should be made of two important attractions somewhat further afield. Hoa Lu was the ancient capital of Vietnam under the Dinh (968-80) and Early Le (980-1009) dynasties. Set amid spectacular karst outcrops in central Ninh Binh province, some 94km (58 miles) south of Hanoi, are two historic temples. The first temple, Dinh Tien Hoang, was restored in the 17th century and is dedicated to the Dinh Kings. Inside are statues of Emperor Dinh Tien Hoang and three of his sons. The second temple, Dai Hanh, is also dedicated to the memory of the Early Le Kings.
1 Day Hoa Lu – Tam Coc Tour

Tam Coc & Bich Dong Caves
Used as an enchanting backdrop in the French film Indochine, Tam Coc means ‘three caves’: Hang Ca, the first is 127m long; Hang Giua is 70m; and Hang Cuoi is just 40m. From the wharf we can take a rowboat on the Ngo Dong River to properly see Tam Coc A typical visit to all three caves takes around three hours; during this time we can admire the beautiful area of which is called Halong Bay on land. Nearby Tam Coc cave is Bich Dong offers a similar experience with fewer people. It also has a picturesque pagoda consisting of several small temples inside a large cave. 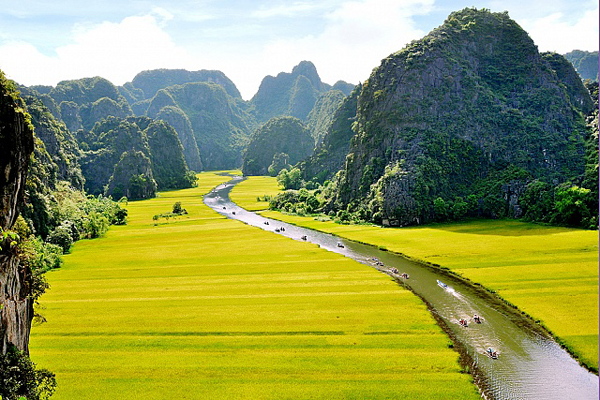