The old capital of Vietnam, Hue city is the gorgeous pearl at Central Vietnam attracting you with historical relics and romantic sceneries. Hope the list of 10 attractions and highlights below will help you to have absolutely amazing Hue tours.

Hue Flag Tower in HueDominating the skyline is the 37-m (121-ft) high Cot Co Flag Tower, erected in 1809. Cot Co achieved international renown on the morning of 31 January 1968, when communist forces seized the Citadel and ran their yellow – starred banner up its tall mast. For the following 25 days, the Viet Cong flag fluttered defiantly as US Marines and South Vietnamese soldiers fought house-to-house to retake the city. During this brutal struggle, Hue was battered by machine guns, rockets, bombs, napalm, artillery fire, and naval bombardment, causing immense destruction. 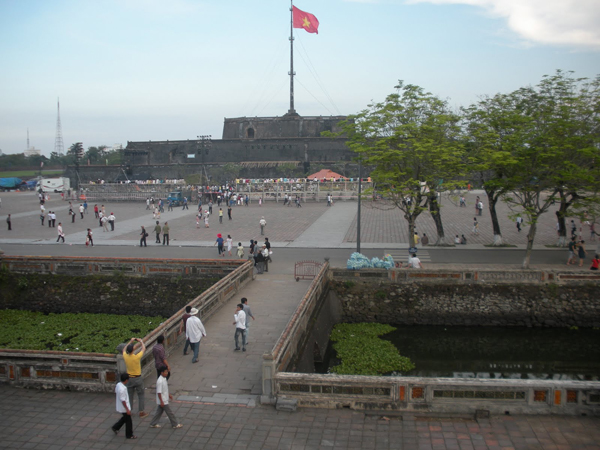 Further damage ensued following the collapse of the south, as symbols of Vietnam’s royal past were left to decay by the victorious communists –a policy which changed sharply in 1990 as the potential for tourism was realized. In 1993, UNESCO declared Hue a World Heritage Site. Restoration and conservation work continue.

Originally part of the Kingdom of Champa, Hue first became part of Vietnam in 1306 when King Java Sinhavarman III capriciously renounced all Cham territories north of the Hai Van Pass in exchange for the hand of Huyen Tran, a beautiful Vietnamese princess. In 1558, Hue – then known as Phu Xuan – became capital of the Nguyen Lords of the south. In 1802, Nguyen Anh, the last of the Nguyen Lords, defeated his northern rivals and proclaimed the city capital of a reunited Vietnam, changing its name to Hue and his own to Gia Long, first of the Nguyen Emperors.

The Moated Citadel of Hue

The Moated Citadel of HueThree years later, Gia Long ordered the construction of Hue’s moated Citadel (Kinh Tanh). This vast structure is an unusual hybrid, built according to the notions of Chinese geomancy, but in the style of the noted French military architect Sebastien de Vauban. Thus the complex is oriented southeast towards Nui Ngu Binh, or ‘Royal Screen Mountain’ – a low hill believed to deflect harmful influences from the Nguyen capital. 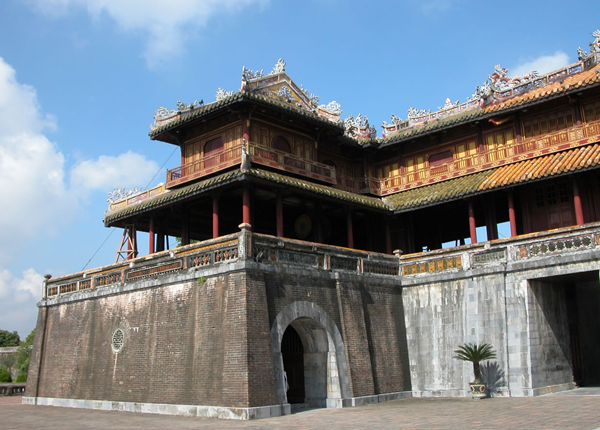 The Moated Citadel of Hue

To reinforce this auspicious aspect of its location, massive brick walls about 6m (20ft) high, 20m (66ft) thick and almost 10km (6 miles) long protect the Citadel. These walls are ringed by lotus-filled moats and punctuated by towers, with crenelated ramparts, an earth glacis, and no fewer than 24 Vauban-inspired bastions. Access to the Citadel is by way of 10 fortified gates, each of which is reached by a low, slightly arched stone bridge across the moat. In imperial times, a cannon would sound at 5 am and 9 pm to mark the opening and closing of the gates.

The Imperial City of Hue

The area within the Citadel – in all, 520 hectares (1,285 acres) – comprises three concentric enclosures, the first of which was formerly used to accommodate the Imperial Ministries and which now constitutes a pleasant area of parks, gardens and quiet residential districts. Here may be found the Nine Holy Cannons, kept in buildings flanking the gates on either side of the Flag Tower. 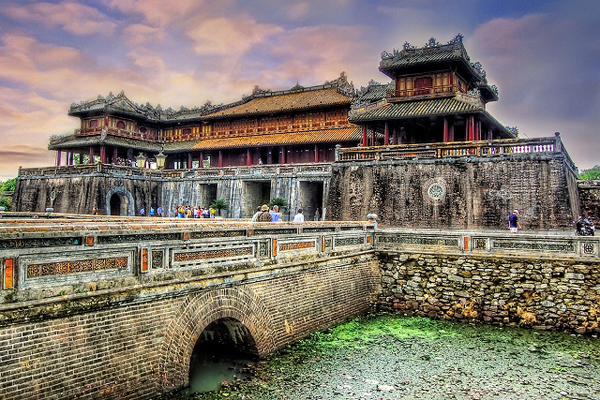 The Imperial City of Hue

The massive but symbolic weapons were cast on the order of Gia Long to protect his new capital. Made from bronze captured from the defeated Tay Son army, the nine cannons are said to represent the Four Seasons and the Five Elements – namely earth, metal, wood, water and fire.

A second moat and defensive wall within the Citadel guard the Imperial Enclosure (Hoang Thanh), which Emperor Gia Long modeled after the Forbidden City in Beijing. This inner city has four gates, the most important of which – in direct alignment with the Flag Tower to the southeast – is called Ngo Mon Gate (Cua Ngo Mon) or ‘Noon Gate’. This majestic entrance, constructed by Emperor Minh Mang in 1833, is considered among the finest surviving examples of Nguyen architecture.

There are five entrances of the Hue Citadel – the central way, reserved for the emperor alone, is flanked by lesser openings for mandarins and court officials; these, in turn, are flanked by two much larger entrances for the royal elephants. Above the massive stone slabs of the main gate-way rests the Five Phoenix Watchtower (Ngu Phung) where the emperor sat enthroned on state occasions. Above this pavilion is a small room reached by a concealed staircase where ladies of the royal court could see through finely carved grilles without being observed. 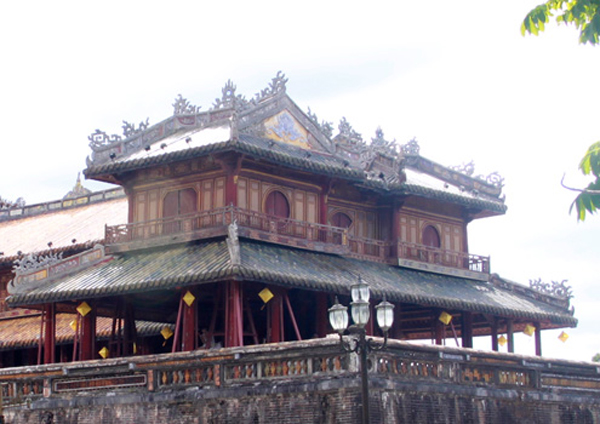 Beyond the Ngo Mon Gate, the Bridge of Golden Waters (Kim Thuy Kieu), which only the emperor was permitted to cross, leads between two lotus-filled ponds to Thai Hoa Palace or the ‘Hall of Supreme Harmony’ (Dien Thai Hoa). This palace, the throne room of the Nguyen Kings, is the most splendid of Hue’s surviving palaces, Originally built by Gia Long in 1805, it escaped serious damage during the Tet Offensive but was in an advanced state of decay until restoration work started in 1991. The yellow-tiled roof is supported by 80 massive wooden columns lacquered a deep red and decorated with golden dragons, the emblem of the Nguyen Dynasty.

Behind the throne room, the Great Golden Gate (Dai Cung Mon) permits access to the Forbidden Purple City (3) (Tu Cam Thanh), formerly the sole preserve of the emperor, his queen, nine separate ranks of concubines, and female palace servants. No man but the king could set foot in this 10-hectare (25-acre) city-within-a-city on the pain of death – his own sons were banished when they reached puberty, and the only non-females allowed inside were palace eunuchs.

In imperial times, the Forbidden Purple City consisted of more than 60 buildings arranged around 20 courtyards, but it was badly damaged by fire in 1947, a tragedy compounded by the Tet Offensive. Fortunately, photographs and detailed plans have survived, and restoration work is underway. Today, much of the former Purple City is given over to vegetable gardens, though in the northeastern quarter, the Royal Library (Thai Binh Lau), an elegant two-story structure built during the reign of Minh Mang (1820-41), survives and has been restored.

The Mieu – Temple of the Generations

Before leaving the Citadel, it is worth visiting the Temple of the Generations (The Mieu), dedicated to the Nguyen Emperors who built Hue. Located in the southwest of the Imperial City and currently, under restoration, the temple houses 10 funerary tablets honoring Nguyen rulers from Gia Long to Khai Dinh (1802-1925). 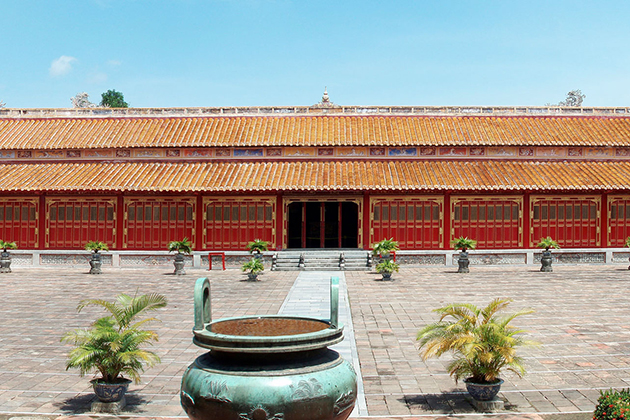 In the courtyard facing The Mieu stand nine large bronze vessels. These are the famous Nine Dynastic Urns (Cuu Dinh) of the Nguyen Dynasty. Cast on the orders of Emperor Minh Mang in 1835, they weigh about 2,000kg (2 tons) each. Decorated with elegant bas-reliefs rich in symbolic detail – dragon, phoenix, elephant, tiger sun, moon, stars – they played an important in the cult of imperial ancestor worship.

Still within the Citadel but on Le Truc Street, just outside Hien Nhan Gate (Cua Hien Nhan), the Imperial City’s northeastern gate, the Fine Arts Museum is well worth visiting. Housed in a fine old building dating back to 1845, the walls are inscribed with poetry written in chu nom or ‘Southern Writing’, a demotic script employing modified Chinese characters developed in the 15th century. By Nguyen times, this had become the chief vehicle for vernacular Vietnamese literature. The exhibits consist chiefly of royal paraphernalia and assorted gifts from past emperors.

Outside The Citadel Beyond the Citadel, Hue has numerous widely scattered attractions. To the northeast of the Citadel is a large, triangular island lying between Dong Ba Canal and the Perfume River. Here, in the busy, congested streets of Phu Cat, the former Merchants’ Quarter, much of Hue’s commerce is still carried on. 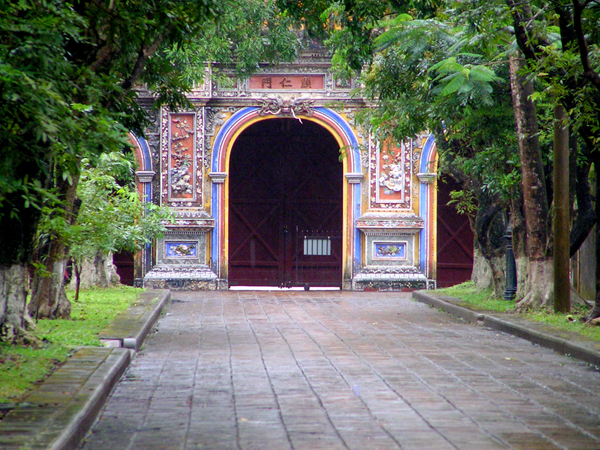 Hien Nhan Gate in The Entrance of To Mieu Temple

At 120 Chi Lang Street, deep in this quarter, may be found the small mosque which once served Hue’s Tamil Muslims, business people originally hailing from the French colony of Pondicherry in South India. Unhappy at the strictures of a socialist economy, Hue’s Muslims have long since departed, but the mosque remains and today functions as a private house.

On the north bank of the Perfume River, about 4km (2,5 miles) southwest of the Citadel, stands the well known Thien Mu Pagoda, also known as the Celestial Lady Pagoda and long considered as a symbol for the city of Hue. Originally founded in 1601 by Lord Nguyen Hoang, the most striking feature of the temple is a 21-m (69-ft) high octagonal tower, the seven-story Tower of the Source of Happiness (Thap Phuoc Duyen), which stands atop a small hillock overlooking the Perfume River. Two pavilions close by the house, respectively, a stone stele erected in 1715 which records the history of Buddhism in Hue, and a large bronze bell, cast in 1710, which weighs over 2,000kg (70 stone). The sound of this bell is said to reach over 10km (6 miles), and in times past could clearly be heard in the Citadel and throughout the surrounding villages. 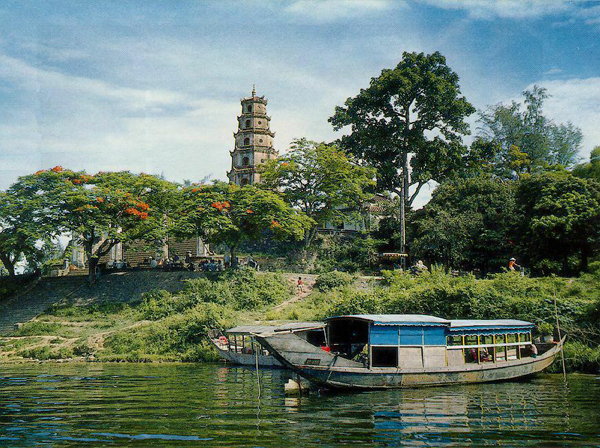 As an ancient poem has it:
The breeze cradles the swaying stems of bamboo
The Thien Mu Bell rings out
And the crowing cockerels of Tho Xuong village respond…

If Thien Mu is considered the religious heart of Buddhism in Hue, then the Temple of Literature (Van Mieu) holds the same status for Confucianism. Founded by Gia Long in 1808, the temple, situated on the north bank of the Perfume River about 1 km (0,5 mile) west of Thien Mu, was intended by the Nguyen Emperor to replace the long-established Temple of Literature in Hanoi. In fact, Hue’s Van Mieu is a much less imposing structure than the capital’s venerable complex, but it is still worth a visit, both for the views of the nearby Perfume River and to see the inscribed doctoral stelae of the Nguyen Emperors. 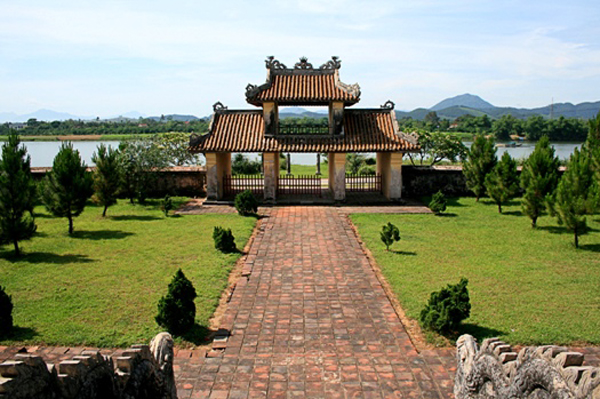 On the south bank of the Perfume River, beyond the former French quarter now known as Khu Pho Moi or the ‘New City’ is the Altar of Heaven (6) (Nam Giao Dan). During the years of Hue’s primacy, this was the most important religious site in the country, though today there isn’t much to see beyond a series of three raised terraces. The first square terrace represents man, the second, also square, represents earth, while the topmost, round terrace represents heaven. Here, approximately every three years between 1806 and 1945, the Nguyen Emperors reaffirmed the legitimacy of their rule through a series of elaborate sacrifices to the Emperor of Heaven.

The name Perfume River derived from perfume flowers of the upper flows through the forests carries fragrant herbs to Hue. With a length of 80 km, the winding river setting through Hue City to please the most discerning travelers. Tranquil water, fortresses, and small houses, as well as simple people in both sides of the river, draw a fascinating painting of the graceful city. Cruising along Perfume River is one of the musts for travelers when visiting Hue. 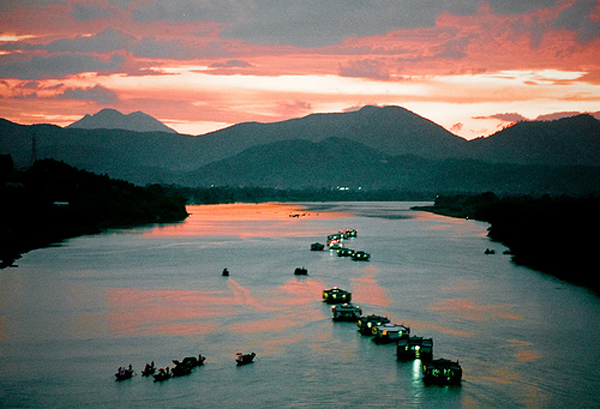 Why I Love Sapa?

What to Do and See in Cao Bang Province, Vietnam Highlights