Hanoi City Tour Itinerary: The Old Quarter of Hanoi
Ho Hoan Kiem – St Joseph’s Cathedral – Old Quarter – Dong Xuan Market – Bach Ma Temple – Ngoc Son Temple – Water Puppet Theater
There’s no better place to start your acquaintance with Hanoi than the city’s bustling Old Quarter. Ho Hoan Kiem – Lake of the Restored Sword – lies in the centre of old Hanoi and holds a special place in the hearts of the Vietnamese.
According to legend, the Viet hero Le Loi was given a magic sword with which to fight the Chinese by the Divine Tortoise, which lives in Ho Hoan Kiem. After a 10-year struggle (1418-1428), Le Loi drove out the Chinese invaders and, as Emperor Le Thai Tho (1428 – 1433), restored the sword to its rightful owner beneath the tranquil waters of Ho Hoan Kiem. 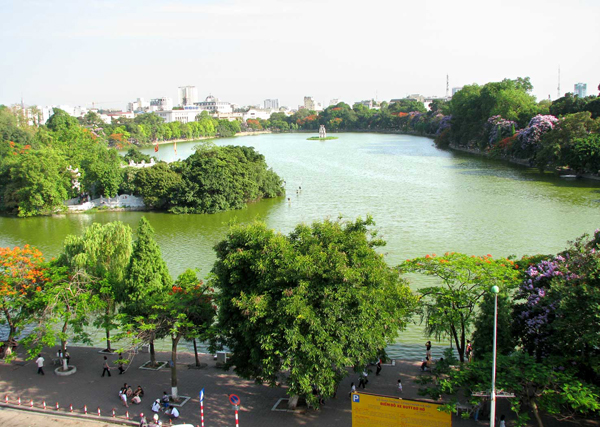 Today the lake makes a delightful retreat from the bustle of central Hanoi. To the east of the lake, a path winds beneath shady trees, while to the west, groups of wispy-bearded old men spend their retirement playing chess. In the middle of the lake, a small pagoda, Thap Rua or Tortoise Stupa, stands on an islet. This Vietnamese folly erected as recently as 1886 – looks best by night, illuminated by fairy lights.

A Maze of 36 Streets of Hanoi
A Maze of 36 Streets of Hanoi The visitor should proceed north along Le Thai Tho by the western edge of the lake. A slight diversion west along Hang Trong leads to St Joseph’s Cathedral (NhaTho Lon). Consecrated in 1886, this is a neo-Gothic building of no outstanding architectural merit, but serves as an interesting souvenir of the French colonial period. By returning to the lake’s shore and continuing north along Le Thai Tho, the visitor will enter Hanoi’s fascinating Old Quarter, also known as 36 Pho Phuong, or ’36 Streets’. 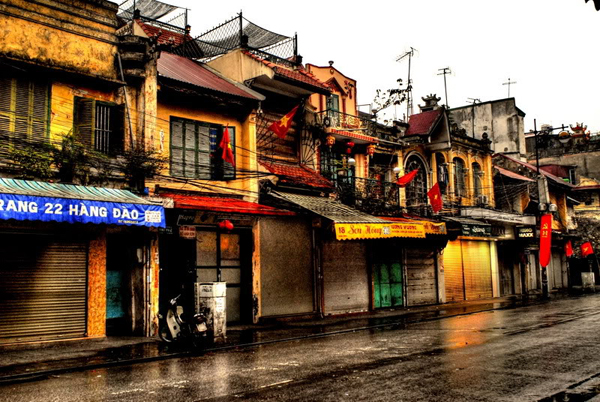 This area, which is almost entirely devoted to commerce, dates back to the 13th century when a group of 36 guilds established themselves here, each centered on a particular street. Today many of the street names still survive, although only a few are still readily identifiable by trade. In Vietnamese hang means ‘merchandise’, thus Hang Bac has come to mean ‘Silver Street’, which even today specializes in jewellery.
Other examples include Hang Chieu or ‘Mat Street’, Hang Ma or ‘Paper Street’, and Hang Thiec or ‘Tin Street’, all of which still market the specialty their name implies. By contrast, Hang Quat, which used to sell fans, now offers bright red flags, lacquer ware and candlesticks, whilst Hang Buom or ‘Sail Street’ – an area long associated with Hanoi’s Hoa, or Overseas Chinese community – now specializes in imported foods and confectionery, with nary a sail in sight. Keep an eye on your watch as a stroll around this area can easily take up a half-day or more.

Tube Housing in Hanoi
Tube Housing in Hanoi The Old Quarter is also remarkable for its traditional ‘tube houses’ – long, narrow commercial buildings designed to combine shop front, storage space and living quarters – which may be as narrow as 2m (6ft) across, but as much as 50m (164ft) deep.
Designed in this fashion in the 15th century to minimize taxation on shop frontage, they have survived only in Hanoi’s merchant quarter and in the ancient town of Hoi An. The best way to see the Old Quarter is to ramble almost at random, seeking out the most lively 01 fascinating sights, yet moving in a generally northwards direction towards the busy Dong Xuan Market (Cho Dong Xuan). 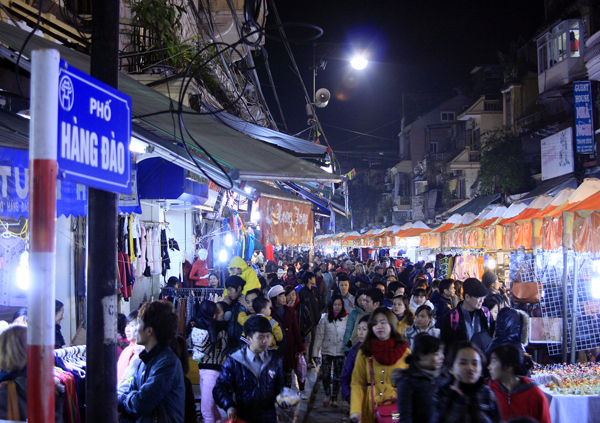 The largest market in Hanoi, Dong Xuan is named after an ancient hamlet long since absorbed within the city. Built in 1889 by the French administration to replace the older Cau Dung or ‘Eastern Bridge’ market, Dong Xuan was destroyed by fire in 1994, but has since been rebuilt and retains its original facade.
Bridges And Fortifications Leaving Dong Xuan to its bustling fruit and vegetable merchants, continue north until you reach the railway line, then turn east along Pho Gam Cau until you reach the great embankment which holds back the Red River in time of spate.
The long railway bridge spanning the river at this point is the famous Long Bien Bridge (4), (Cau Long Bien) which was completed in 1902 and originally named after the then colonial gov-ernor of Indochina, Paul Doumer.
During the Second Indochina War, Long Bien Bridge was of great strategic significance, pro-viding the only communications link across the Red River to China. Defended by anti-aircraft guns and SAM missiles, the bridge was repeatedly bombed by the Americans and doggedly repaired by the Vietnamese – hence the strange irregularity in the framework of rusty metal pylons and struts that support its 1,700m (5,500ft) span.

Garrison Gate of Hanoi Citadel
Turn south from the bridge along busy Tran Nhat Duat and proceed to Hang Chieu, the third turn ing on the right. This leads back into the Old Quarter by way of Cua O Quan Chuong, the Gate of the Commander of the Garrison’, built in 1749 and now the last of Old Hanoi’s forti tied gateways. 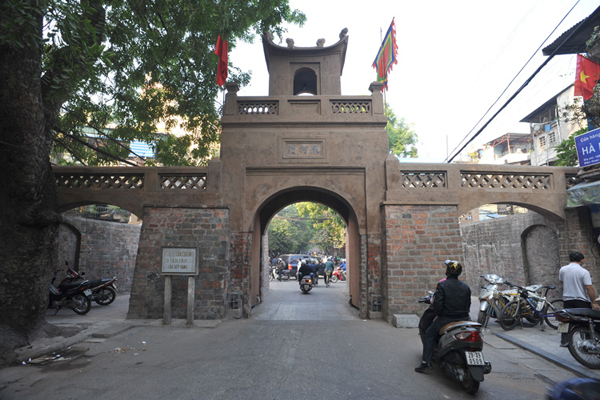 O Quan Chuong – The Gate of the Commander of the Garrison

Ancient Temples of Bach Ma
Ancient Temples of Bach Ma From here it’s just a short walk to the revered Bach Ma Temple (Den Bach Ma or ‘White Horse Temple’) on Hang Buom Street. Founded in the 9th century by King Ly Thai in honor of a white horse guardian spirit that appeared to protect the Old City fortifications, the temple in its present form dates largely from the 18th century and fairly gleams with red lacquer and gilt.
Even a brief glance is enough to suggest strong Chinese influence, and in fact Bach Ma was once associated with the veneration by the local Hoa community of Ma Vien, the Chinese general who defeated the Trung Sisters and subjugated Vietnam in 43AD. 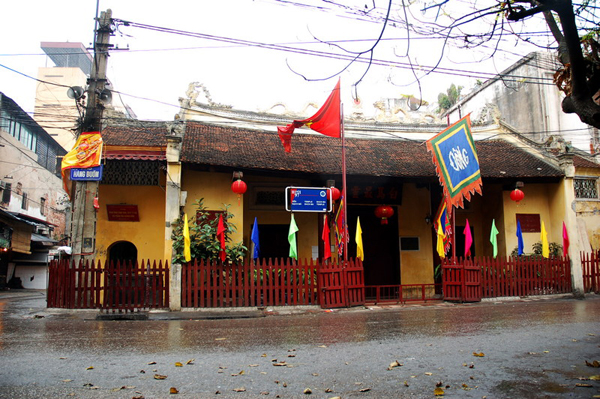 The route continues south through the narrow streets of the shoe bazaar emerging at the northeast corner of Ho Hoan Kiem. On a small mound nearby stands a tall, tapering stone column in the shape of a brush pen.
This Writing Brush Pillar, which proclaims in Chinese characters ta tien qing or ‘writing on a blue sky’, was designed by the revered 19th- century scholar Nguyen Van Sieu.
Close by, the graceful, red-lacquered curve of The Hue, or ‘Sunrise Bridge’, leads to a small island and to Ngoc Son Temple (Den Ngoc Son or the ‘Temple of the Jade Mound’). This elegant building was founded in the 14th century and was originally a Confucian temple. In the 16th—18th centuries, it served as a pleasure pavilion for the Trinh Lords of northern Vietnam, while in the 19th century it was reconstituted as a Buddhist temple.
The temple is now primarily associated with the cult of deified warriors, most notably Tran Hung Dao, the general who defeated the Mongols at the Bach Dang River in 1279.

Hanoi’s Art Galleries
Hanoi’s Art Galleries Cross back over the Hue Bridge and note the dilapidated concrete Martyrs’ Monument erected to honor those who died fighting for the winning side in Vietnam’s Indochina wars.
Nearby, on the east of Pho Dinh Tien Hoang, is a fine old temple converted to serve as an art gallery, which certainly merits a visit. Indeed, the shop fronts along the northern and western sides of Ho Hoan Kiem are dotted with art galleries.
No other city in Southeast Asia has a better or more eclectic collection of galleries, offering everything from traditional Vietnamese art to European-style paintings – the influence, in particular, of Vietnam’s French and Russian ties being readily apparent.
This is a good area to stroll and shop in during the early evening, especially as there are numerous small restaurants and cafes where iced beer and excellent Vietnamese coffee are available. Young couples, too, favor this lakeside area for early evening trysts – generally executed with an elegant discretion.

Water Puppetry in Hanoi
Water Puppetry in Hanoi After some refreshments, be certain to round off the day by visiting the fascinating Thang Long Water Puppet Theatre at 57 Dinh Tien Hoang, just opposite the eastern end of the Hue Bridge. Unlikely though it may sound, this is a truly remarkable art, being uniquely Vietnamese and genuinely impressive. 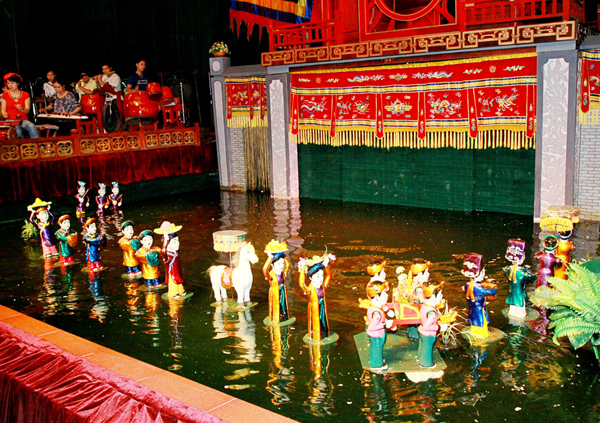 Water puppetry – known in Vietnamese as roi nuoc – originated in the Red River Delta of northern Vietnam more than 1,000 years ago and, as an art form, still remains unknown virtually everywhere else. The puppets are carved from the hard, water-resistant wood of the fig tree to represent both traditional rural lifestyles (farmers, buffaloes, ducks, and officials) and mythical creatures (dragons, phoenixes, unicorns).
Standing concealed behind the watery stage, themselves waist-deep in water, the puppeteers use a complicated but invisible system of pulleys and poles to manoeuvre their wooden charges. The special effects are very clever indeed; rice sprouts from the water at an accelerated pace and smoke and fire issues from the dragons’ mouths.

Walk On Water
Meanwhile, a motley assortment of puppet people and puppet farm animals appear to walk on water as they live out their everyday lives farming, hunting, fishing and flirting while attempting to avoid various kinds of misfortune. All the while a traditional orchestra playing flutes, drums, xylophones, gongs and stringed instruments provides appropriate accompanying music. Performances are usually held 8-9pm every day except Monday. Shows are popular, so it is wise to book tickets in advance.