With more than 1000 years of history, Hanoi is more than a capital city of Vietnam. Right! Hanoi should be put on the top first destination to visit when you travel to Vietnam. There are many things that you will not be able to imagine about Hanoi. Hanoi is famous for ancient temples, citadels, authentic museums, French’s architectural buildings, colorful markets as well as many spectacular landscapes. Hanoi also attracts the tourists by the 36 hustling and bustling streets with plenty of shops with a varied option from food to clothes. Top 10 attractions in Hanoi below will reward you all the necessary information you need to imagine about a real Hanoi! 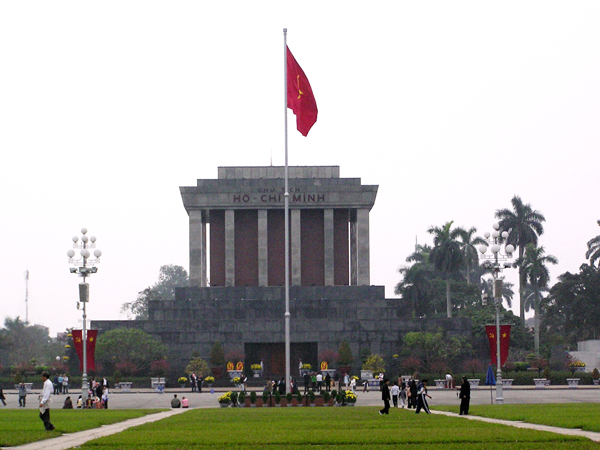 The Mausoleum was built from 1973 to keep Ho Chi Minh’s body. Ho Chi Minh Mausoleum is also known as the final resting place of President Ho Chi Minh, the leader “lives on forever” of Vietnamese people. Vietnamese people esteem him and call him as a friendly name – “Uncle Ho”. Every day, many Vietnamese people get to this mausoleum to visit the iconic President of Vietnam.
The House on stilts used to be the Residence of Ho Chi Minh President, where he lived from 1958 until end of his life. It is a simple stilt house near the Presidential Palace with a wooden tiled house. Surrounded green gardens with plenty of fruit trees and huge pond of variety fish inside as his normal and pure life. Simple house include meeting room in downstairs; bedroom with a small blanket, a single wooden bed, a rush mat, an old fan and a bottle of water and book room in upstairs. A visit to this place will bring you imaginations and memories of a simplest and greatest leader of Vietnamese people.

The Ho Chi Minh Museum located in the last spot which public on the birth centenary anniversary of President Ho Chi Minh May 19th, 1990. It was built with the shape of a lotus, one of the famous flowers in Vietnam including 3 floors and approximately 20m high with exhibition halls to display over 2,000 documents and artifacts, which reflects the life of President Ho Chi Minh and the strong history of Vietnam during 19th century.

The Presidential Palace is place, which Ho Chi Minh lived and worked in period time from 1954 to his death in 1969. This show many documents concerning to his work to lead Vietnam pass through the war including his cars, documents. 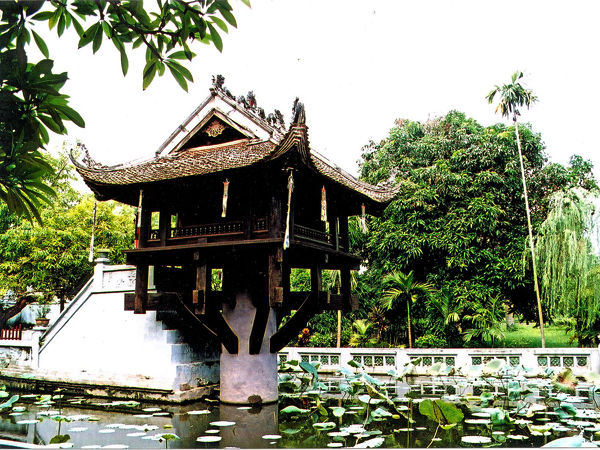 One Pillar Pagoda is one of the most iconic temples of Buddhist Vietnam in Hanoi. It was constructed in 1094 by the King Ly Thai Tong after his dream, the bodhisattva Avalokiteshvara seated on a lotus flower and handed him a baby son. After that, he married and had a son. He built this temple with one pillar in the middle of lotus pond to show his gratitude. The architecture of this pagoda is an attraction in Hanoi.

Temple of Literature
Situated in Dong Da District, Temple of Literature is one of destination in Hanoi that you should not be missed. Temple of Literature is an iconic of traditional Vietnamese architecture, built by Emperor Ly Thanh Tong in 1070 to worship Confucius and his great students. The Temple is well-known as the first university in Vietnam to teach principles of literature, Confucianism and poetry. It has become the most important education center from 1076. From the 15th century, King Le Thanh Tong declared the talent doctorates to the stelae with their name, date and their talent. Now, The Temple of Literature has 82 stelae of 1304 doctor laureates in the temple and attracts many Vietnamese students to pray for luck and insight before they get the entrance examination of the universities as well as take some memorial photos with classmates after graduated from university. 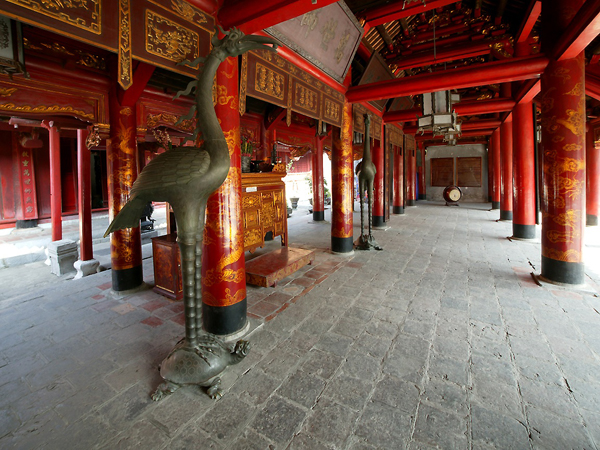 Inside architecture in Temple of Literature

Hanoi’s Old Quarter
It takes 15 minutes walking to get to the Old Quarter from Hoan Kiem Lake. Hanoi Old Quarter has a unique architecture that you will never see from any other countries in the world. The crowded streets, daily life of residents around the winding streets, colorful markets as well as a long history are all the visitors need to learn about Hanoi. In the 11th century, King Ly Thai To built his palace to developed his country and the Old Quarter appearance at that time. 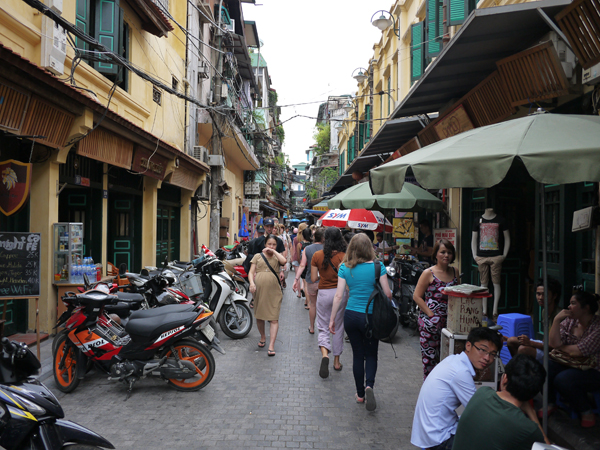 A corner of old streets in Hanoi

Until now, Hanoi is over 1000 years old with 36 colorful streets, which original are a small villages or group to live and work surround the center of palace. 36 streets of the old quarter named by the products they make such as Hang Duong to sale sweet, Cha Ca to sell roasted fish, Hang Bac to sell silver or jewelries…
The quarter is also famous for special “tubular houses” in the narrow alleys and streets; it is not tall as model buildings, they are very narrow, long and built very close. Because, the king did not want the houses to be higher than the height of the palanquin of king, as the results the old quarter has the unique architecture as you see today.

Hoan Kiem Lake & Ngoc Son Temple
Located and considered as a heart of Hanoi city, Hoan Kiem Lake attracts many tourists by its natural beauty as well as the colorful surrounding landscapes. Located in the center of beautiful islet, Ngoc Son Temple is famous for the iconic The Huc Bridge, the classical Vietnam wooden bridge with red color, the bridge is the only way to access the temple. 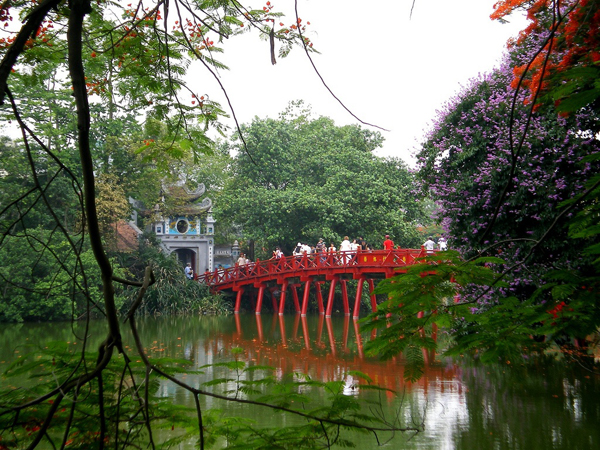 According to the legend, Hoan Kiem Lake is place where the Le Loi King returned the magical sword to Golden Turtle God in the lake after finishing the war against Minh invaders and then the lake was called “Lake of the Returned Sword” (Hoan Kien Lake in Vietnamese).
Sitting on the beautiful islet of Hoan Kiem Lake, “Turtle Tower” is the highlight of Hoan Kiem Lake in particular and Hanoi in general. Built in 19th century Turtle Tower has become an important iconic of the peace to the people of Hanoi. The ground floor of the tower was built from 18th century. Particularly, this tower and Hoan Kiem Lake has become the house of the big turtles. If you are lucky, you can pick up some moments of the real turtles emerging in Hoan Kiem Lake! 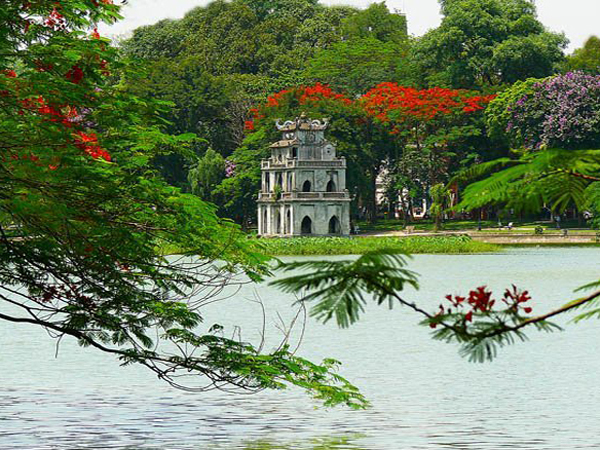 Turtle Tower in the middle of Hoan Kiem Lake

Museum of Ethnology
Museum of Ethnology located on Nguyen Van Huyen Street, Cau Giay District, about 8 km from the city center. Opened to public on November 12, 1997, the museum displays the cultural heritages with over 15,000 artifacts, 237 audiotapes, 42,000 photographs and variety of documents of 54 ethnic groups in Vietnam. The museum shows the real face of Vietnam, a multi-ethnic country, diversity of cultures, unique traditional values as well as the traditional life of Vietnamese people including agricultural tools, musical instruments, clothes, even jewelers. 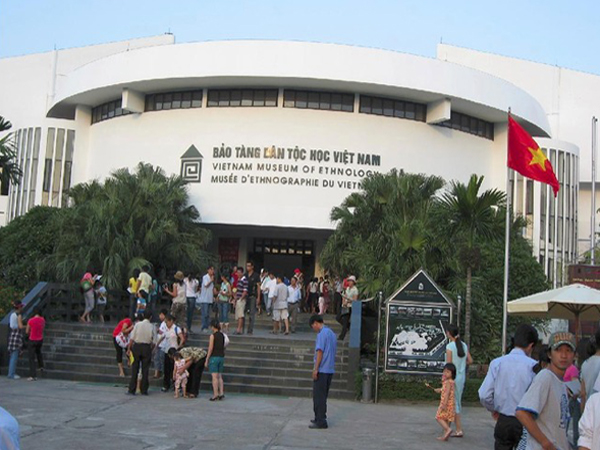 The outdoor exhibition area cover a large area to represent the most popular architectural houses and real life of Vietnamese ethnic including the Hmong house, the Tay stilt house, the Bahnar communal house, the Ha Nhi house, the Cham traditional house, Viet house and especially the Giarai tomb. Sightseeing around the large area and learn Vietnam culture in area ornamented with beautiful landscapes will be a great experience. The museum also displays some traditional events such as Tet, funeral & wedding ceremony, and other social and spiritual activities of Vietnamese people. 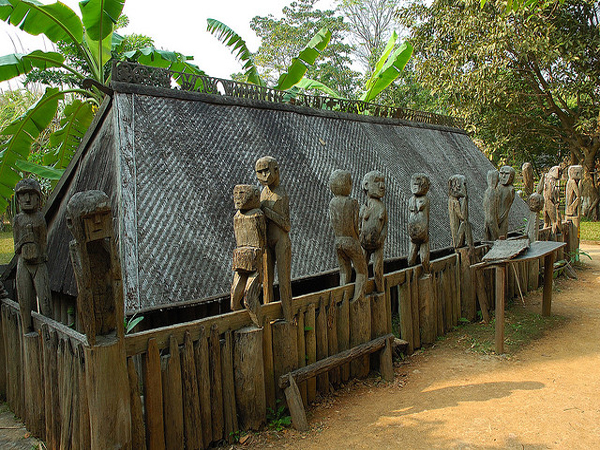 Hanoi Hilton Prison – Hoa Lo
Hoa Lo prison is located in Hoa Lo Street, Ha Ba Trung District, near Hanoi Tower. During the Vietnam War, Hoa Lo prison has an ironically name ‘the Hanoi Hilton’. Originally, Hoa Lo prison built to keep prisoners by the French colonists and American in Vietnam War. The prison displays the real life inside the prison, which shows the Vietnamese struggles against French and relate to the prison’s use until 1950. Hoa Lo included demolition, conversion and museum to present original equipment, the guillotine room for men and women, narrow, wet rooms, where kept Vietnamese soldiers. The museum display many documents, artifacts, slides and DVDs to the life inside the prison during Vietnam War. 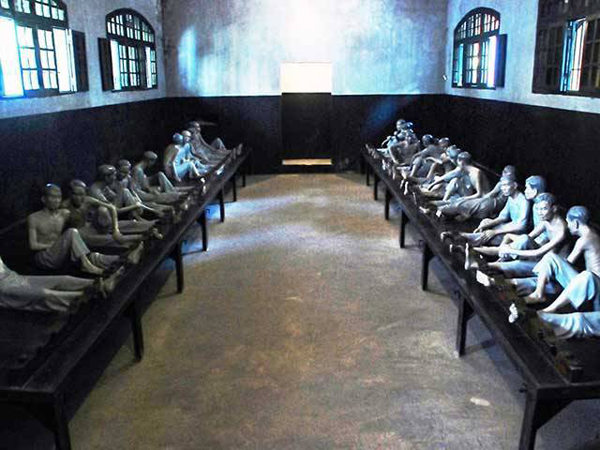 French Quarter: (Hanoi Opera house, old French building area)
The French Quarter covers an area in Southern bank of Hoan Kiem Lake with French Boulevards and French colonial architectures, this made Hanoi called the Paris of Orient. The French Quarter was built by French colonists when they occupied Vietnam in 19th century. The complex highlights with Hanoi Opera House, old French buildings and many French-style villas. Nowadays, the French Quarter is partly changed by buildings, hotels, restaurants and shops. Wandering along the bustling streets and small alleys to see French architecture will be a fantastic experience along with a trip to visit the National Museum of Vietnamese History situated near the Opera House and Trang Tien Street. All ancient buildings feature the special French architecture during the French colonial time. 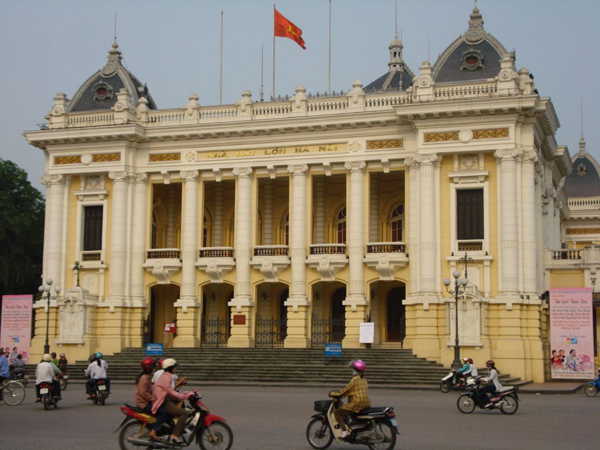 Dong Xuan Market
Located in the northern part of Hanoi Old Quarters at Dong Xuan Street, Dong Xuan Market is the largest and oldest market in Hanoi just 15 minute walking from the Lake. Dong Xuan Market first built in 1884 by the French colonists and reconstructed in 1994 in approximately 600 square meters. The Dong Xuan night market open weekly on Friday, Saturday and Sunday and sell everything such as food, souvenirs, artifacts and clothes. Getting lost in the night market will be an interesting experience you should try when visiting Hanoi. 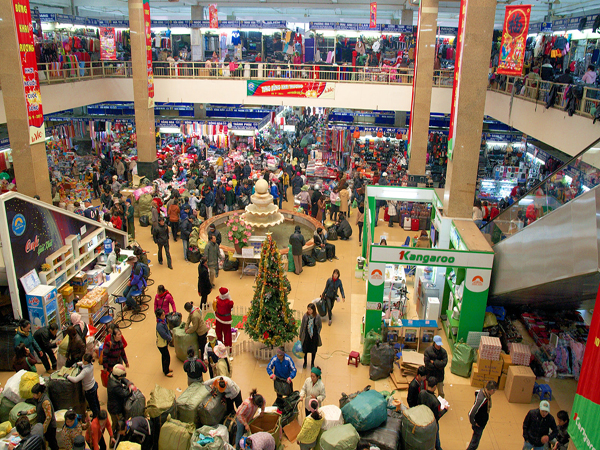 West Lake Area & Tran Quoc Pagoda
Sitting on the small islet of the West Lake – the biggest lake in Hanoi, Tran Quoc Pagoda is one of the most famous and oldest pagodas in Hanoi with over 1,500 years historical line. The present pagoda reconstructed originally in the 16 century by the King Ly Nam De. The landscapes of the pagoda combined between scenic West Lake outside and the Buddhism’s architecture inside. If you are traveling in Hanoi, West Lake and Tran Quoc Pagoda are worth to pay a visit. 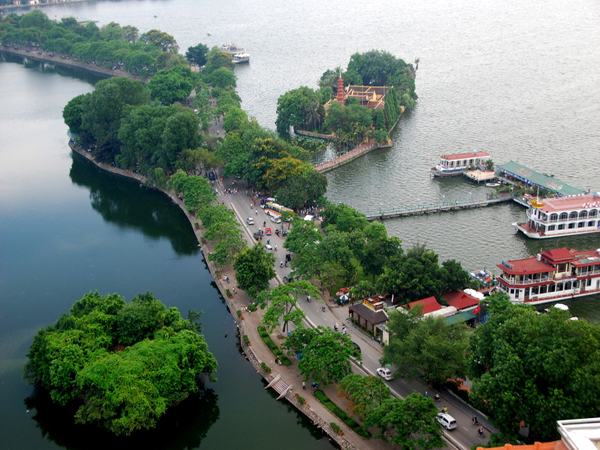 A Corner of West Lake

Quan Thanh Temple
Situated in the center of Hanoi, near the West Lake and at cross of Quan Thanh and Thanh Nien streets, Quan Thanh Temple is one of the must-visit temple in Hanoi. Quan Thanh temple is famous for one of “Four Sacred Temples” in Hanoi (“Tu Tru” in Vietnamese). The temple originally located in the south of the To Lich River and then move to the North-West of Thang Long Capital to become four main directions including East-West-South-North to protect ancient Thang Long Citadel. 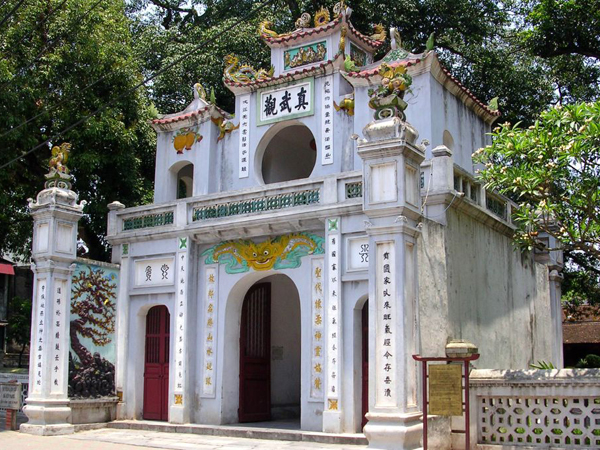 Vietnam
Hanoi Hanoi Attractions Thing to do and see in Vietnam

Top 10 Most Interesting Activities in Cambodia

Suggested Itineraries for Traveling to the Northwest of Vietnam