Originally the site of a Black H’mong settlement, Sapa first came to the attention of the French in 1901. A military garrison arrived two years later and named their camp Sapa after a nearby market known as Sapa, which was situated some six kilometers north east of the present town. All of the existing Black H’mong in the area was forcibly resettled to Sin Chai, some 6 kilometers to the west.
Soon after the completion of the railway line from Hanoi to Lao Cai in 1906, the first visitors began to arrive. The Cha Pa Hotel was opened in Sapa in 1909, and by 1913 a military sanatorium had been established to treat sick expatriates who, it was believed, would benefit from the clean mountain air. 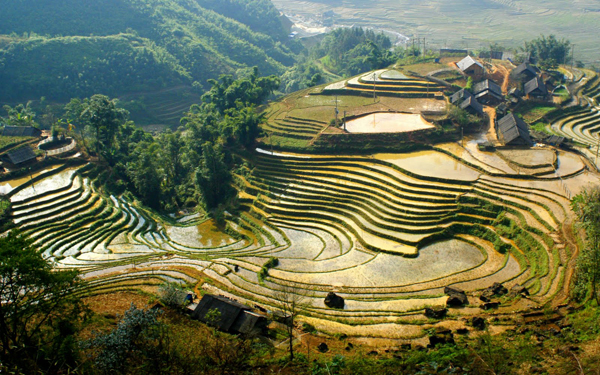 From 1914 the French authorities began opening branches of major government offices in Cha Pa with the aim of establishing it as a summer capital to which colonial administrators could retreat in order to escape the heat of the Red River Delta. In 1922 a summer residence was constructed here for the Governor General of Indochina. Thereafter, as news of the quasi-European climate and the beautiful scenery of the ‘Tonkinese Alps’ spread throughout French Indochina, Cha Pa developed rapidly as a health resort. The Fan Si Pan Hotel was built in 1924, and later that year a paved road from Lao Cai was completed, linking Cha Pa with the railway network and its nightly sleeper trains to and from the capital. The luxurious Metropole Hotel, located at the foot of Ham Rong Hill, opened its doors in 1932. The Hotel du Centre was added in 1937.
By the 1930s Cha Pa was a sizable settlement, with well over 200 French buildings – including a large prison – situated in the area immediately to the north west of the present town. The town had its own running water and sewage, telegraph and telephone systems, with electricity provided by a power station constructed on the Cat Cat Waterfall. Throughout this period Cha Pa was renowned for its many parks and flower gardens, each beautifully maintained through the forced labor of Vietnamese prisoners.

Cha Pa Church was built in 1934 and entrusted to the care of a parish priest appointed by the Bishop of Hung Hoa. In 1941 a Cisterican convent was established at nearby Ta Phin , housed by a small group of nuns who had escaped persecution in Japan. After 1943 the convent farm became the main provider of dairy and other fresh products for the town.
In February 1947 Viet Minh troops launched a devastating attack on Sapa, destroying military installations and forcing civilian residents of the town and the Cistercian nuns of Ta Phin to flee to Hanoi. Government offices, hotels (including the Metropole) and private villas were seriously damaged during the attack, and the main Ta Phin Convent building was also burned to the ground. Cha Pa was re-occupied by the French in March 1947, but with the security situation deteriorating rapidly its days as a fashionable colonial resort was over. In October 1949, as Viet Minh forces went on the offensive throughout the far north, the French left Cha Pa for good.
In March 1952 the French high command ordered its air force to bomb the town. The Governor’s summer residence and other government buildings, the sanatorium complex and most of the French villas were destroyed. At this time the remaining Vietnamese population fled and did not return until the early 1960s, when the town – now known as Sapa – began once more to develop.

Opened to foreign tourists in 1993, Sapa has within the space of little more than 15 years changed from a sleepy backwater into one of the busiest tourist resorts in the country. Just a day’s drive or overnight rail journey from Hanoi, its cool weather, stunning scenery and photogenic ethnic minorities have quickly made it the jewel in the crown of the Vietnamese tourism industry. 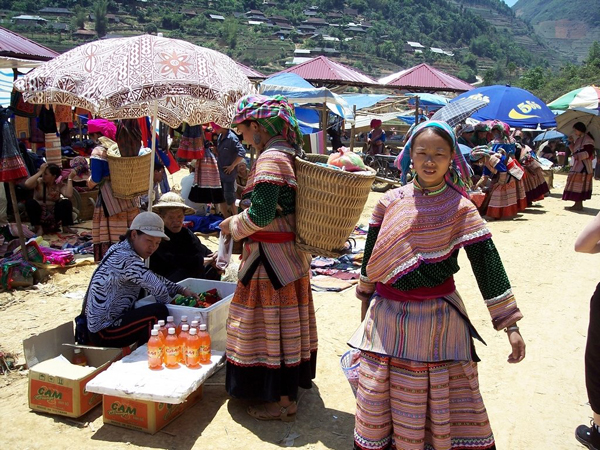 To travellers arriving from Lai Chau, the combination of crowds of foreign tourists, persistent ethnic minority vendors and up-market hotels and restaurants initially comes as rather a shock, yet it quickly becomes apparent that Sapa is still a delightful little town with much to offer the visitor.
Most visitors to Sapa arrive on Friday night and leave on Sunday morning, so that they can visit the town’s colorful Saturday market. However, those wishing to avoid the crowds of foreign tourists who are more interested in taking peaceful walks amidst the beautiful hills surrounding Sapa may prefer to visit the town on a quieter weekday.

Sapa – The Places of Interest