Hue is located along the banks of the Perfume River in Hue city and a few nearby areas surroundings of Thua Thien Hue province. Hue is center of culture, politics, the economy of the province, is the former capital of feudal Vietnam under the Nguyen Dynasty from 1802 to 1945. 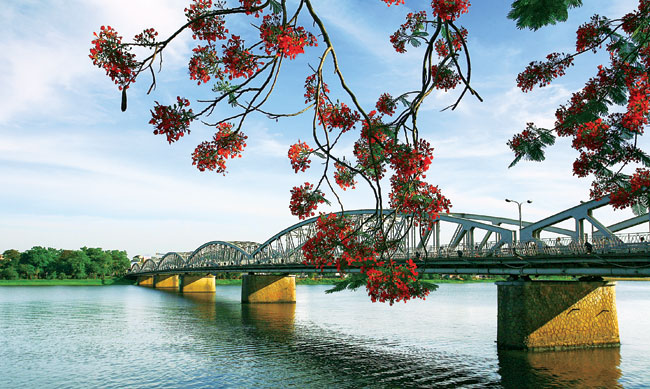 History
Since 1306, following the marriage of Princess Huyen Tran (Tran Dynasty) with the Cham King Che Man in the land called Chau O and Chau Ly (including Quang Tri peovince, Thua Thien Hue and part of northern Quang Nam province today) is named Thuan Hoa. By the second half of the 15th century,in King Le Thanh Tong time, landmark Hue make its first appearance. In 1636, the palace of Nguyen Lords is located in Kim Long (Hue), til 1687 moved to Phu Xuan – and be the Citadel today. In the early years of 18th century, Phu Xuan is the center of politic, economy, culture of “Cochin”. From 1788 to 1801, Phu Xuan became the capital of the Tay Son Dynasty.
From 1802 to 1945, Hue was the capital of unified Vietnam under the reign of the 13 Nguyen Kings. At this time, there has formed the historic buildings of cultural values that represents the Hue Citadel, especially the Citadel (253 constructions), 7 clusters tombs of 9 kings Nguyen, Nam Giao, Ho Quyen, Hon Chen Temple. 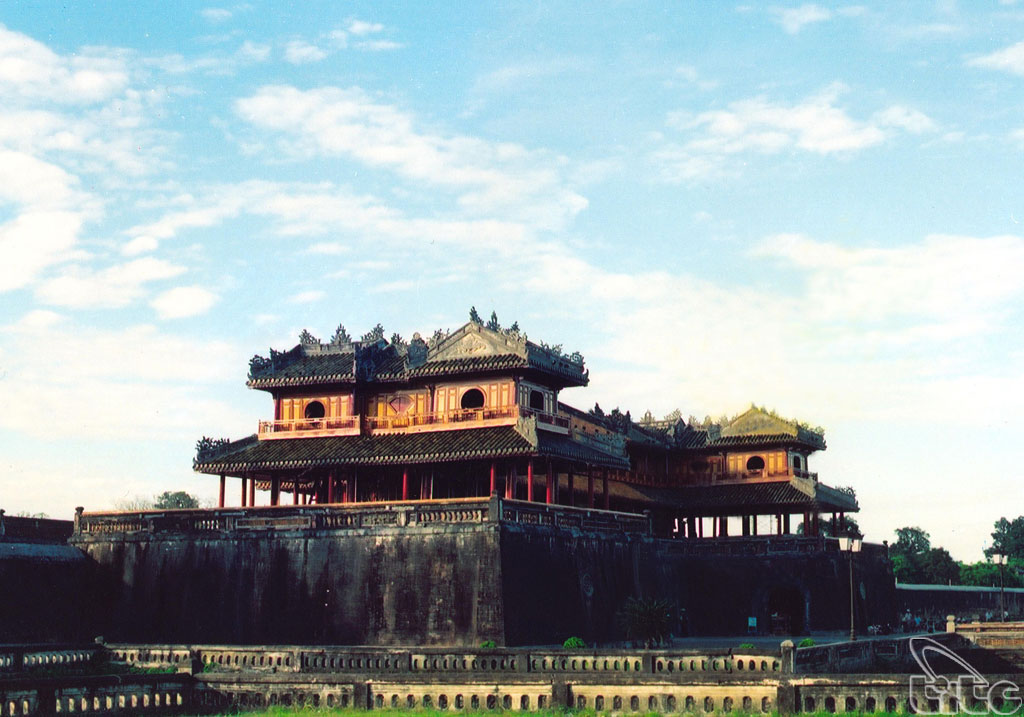 Cultural values
In the north side of the river, system architecture represents the authority of centralized mode of Nguyen is three citadels: Hue Citadel, Royal Citadel of Hue, Hue’s Forbidden City, nested and stretched along the longitudinal axis from the south to the north. The citadel system is a paragon of the harmonious combination between Eastern and Western architecture, is set in a natural landscape with many elements of natural symbols available that the people were tacitly to consider it is a part of the Hue Citadel – which is Ngu Binh Mountain, Perfume River, Gia Vien dune, Boc Thanh dune…
Citadel limited by a ring squared wall with each side approximately 600m with 4 entrances which are considered as symbol of the citadel: Ngo Mon Gate is the highest administrative area of Nguyen dynasty. Inside the Citadel, slightly near backwards is the Forbidden City of the Royal.

Throughout the three buildings, The road running from the river bank carrying on the most vital structures of Hue Citadel: Nghinh Luong Dinh, Phu Van Lau, Ky Dai, Ngo Mon Gate, Thai Hoa Palace, Can Chanh palace, Can Thanh palace, Khon Thai, Kien Trung tower … Two side of the road are hundreds of large and small buildings arranged base on the balance of grasses and trees hidden and appearance between the natural colors which gives people a feeling of gentle serenity. 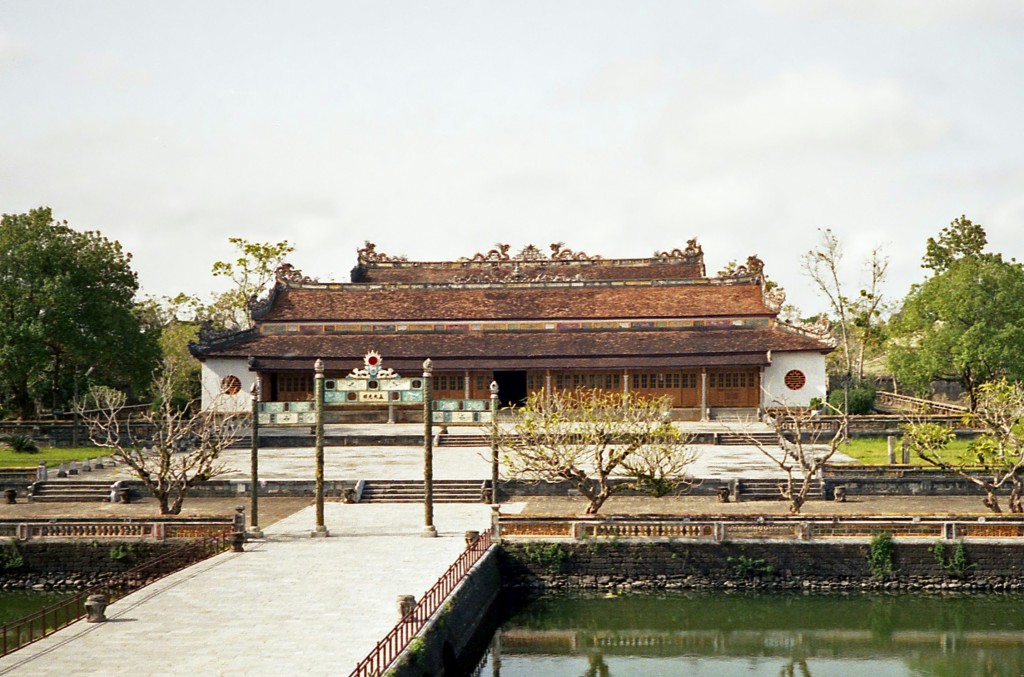 Far away to the west of the citadel, situated on both sides of the river, tombs of Nguyen Kings are considered as achievements of architecture mixed with landscapes. The architecture of mausoleums brings a completely separate style of Vietnam.
Each tomb of Nguyen’s king reflect the owner’s personality and life: Gia Long Tomb is rustic but grand between rolling mountains make visitor feel the atmosphere of the experienced general with hundreds of battles; imposing Minh Mang Tomb is located in the middle of mountain, forest, lakes cleverly embellished, We can see the gifted politician, a great mind and poet; Thieu Tri Tomb is sleeping in the deep and quietly in deserted countryside also partly reflects the mind of a super Vietnamese poet, but could not keep following the will of previous generations; poetic Tu Duc tomb is formed mainly by the sophistication of the people, its landscape reminds visitors of an image of compassion king with personality of a poet …
In addition, there are some sites that embellish the beauty of Hue such as: Perfume River, Ngu Mountain, Thien Mu Pagoda, Bach Ma, Lang Co, Thuan An… 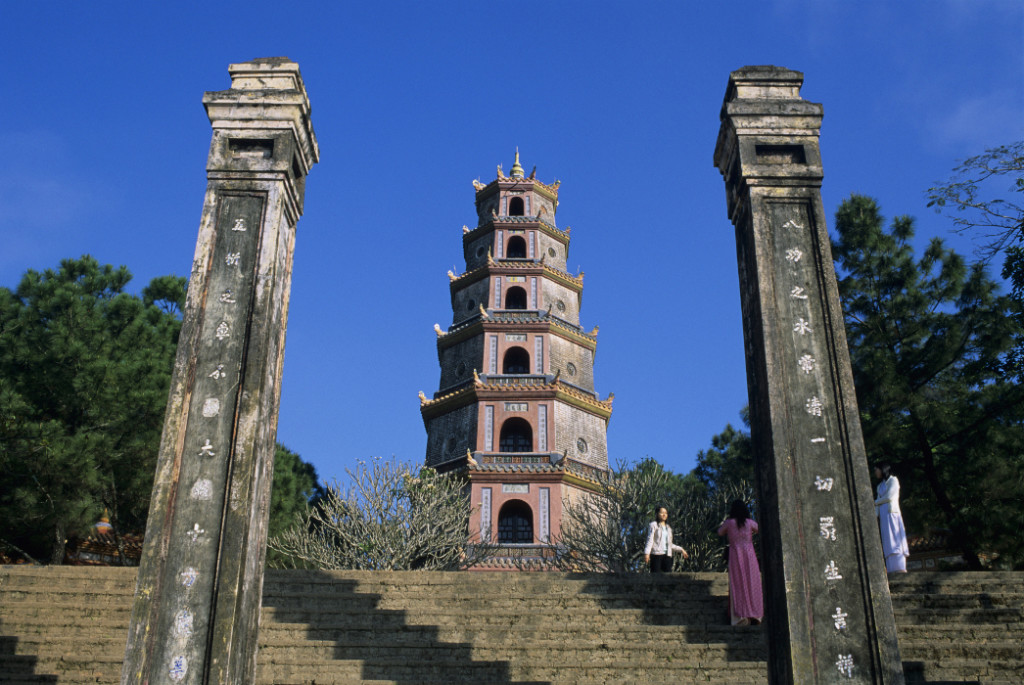 Hue complex is a world cultural heritage following criterion No. 4 which met the following factors:
– Typical for a unique artistic achievement, the masterpiece created by human hands.
– There is great value in terms of construction techniques, the art of architecture in an urban development plan or a program to beautify the landscape in a cultural area of the world;
– A typical architectural complex of an important historical period.
– Incorporates with important events, historical celebrity, ideas or beliefs which have influences.

You may like some of our product in Hue at Hue tours or hotels in Hue.

Halong Bay – Wonder of The World