The fortified city of Angkor Thom is spread over an area of nearly 10 sq km (4 sq miles). sq At its peak, it had a population of around one million. Of the five gateways into the city, the most commonly used is the South Gate, from which a pathway leads straight to the Bayon temple. Beyond this lie the ruins of many other striking monuments, including Baphuon and Phimenakas. Although most are in a state of disrepair these colossal, beautifully sculpted structures, adorned with intricate carvings, still reflect the glory and power of the Khmer Empire. 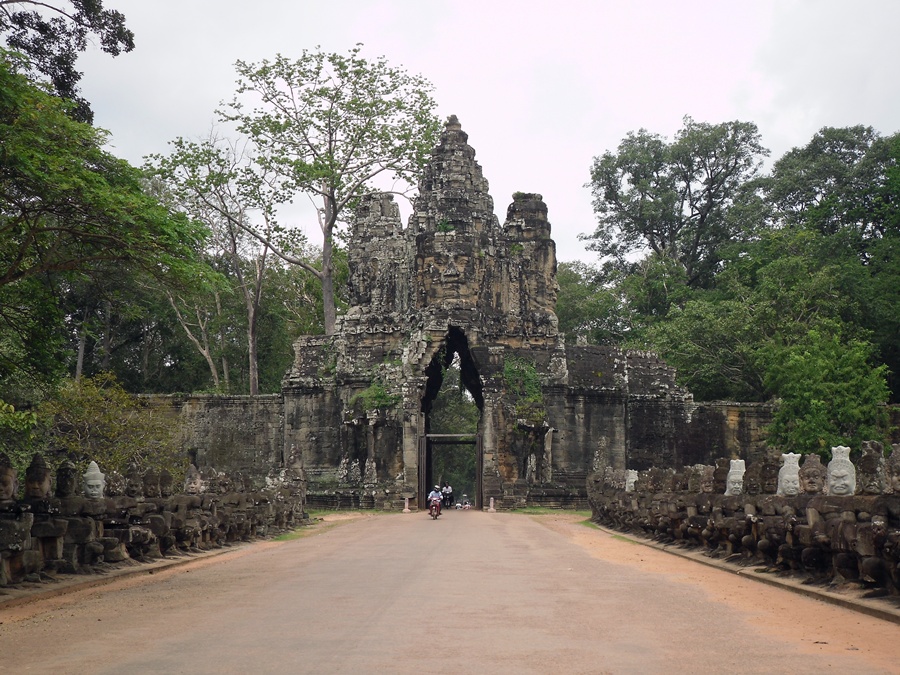 The imposing South Gate is the best-preserved of the five gateways into Angkor Thom Its approach is via an impressive causeway flanked by 154 stone statues, gods on the left side and demons on the right each carrying a giant serpent.

The South Gate itself is a massive, 23-m (75-ft) high structure, surmounted by a triple tower with four gigantic stone faces facing the cardinal directions. On either side of the gate are statues of the three-headed elephant Erawan the fabled mount of the Hindu god, Indra. 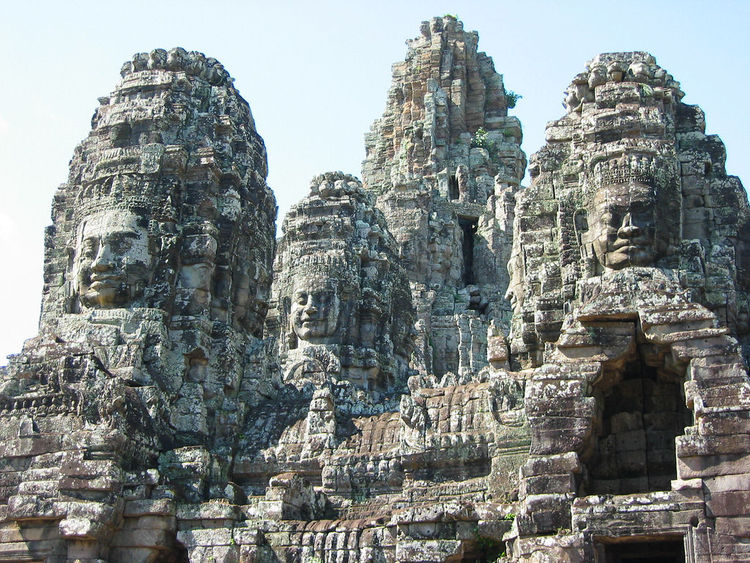 Representative of the period’s artistic brilliance, the Bayon is the city’s most unique temple Shaped like a pyramid, its two most awe-inspiring features are the several huge calm, smiling faces that adorn its towers, and the fascinating bas-reliefs on its many galleries. 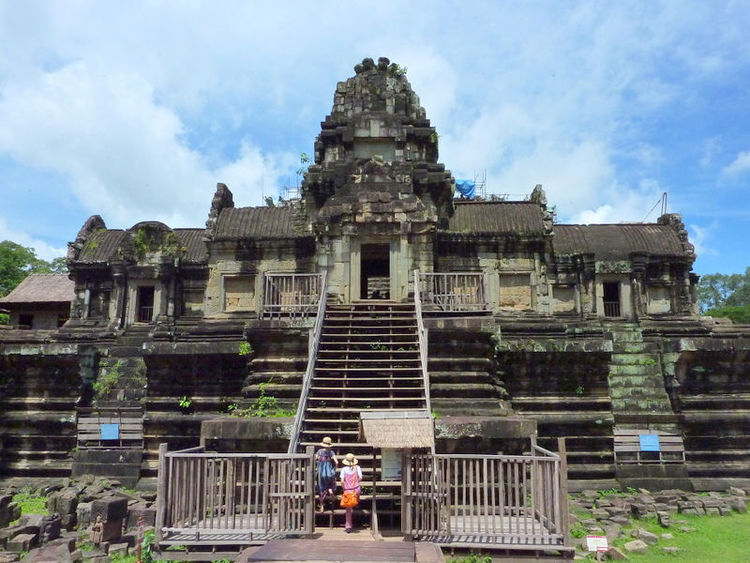 Believed to be one of the grandest of Angkor’s temples Baphuon was built by King Udayadityavarman II in the 11th century. A Hindu temple, its pyramidal mountain form represents Mount Meru, the mythical home of the gods A central tower with four entrances once stood at its summit, but has long since collapsed The temple is approached via a 656-ft(200-m) long raised causeway and has four gateways. Each is decorated with elegant bas-reliefs, with scenes from Hindu epics such as the Mahabharata and Ramayana (Reamer in Khmer). Inside, spanning the western length of Baphuon is an enormous Reclining Buddha. As the temple was dedicated to Hinduism this image was probably added later, during the 15th century Badly damaged, the temple is now undergoing restoration and access is restricted. 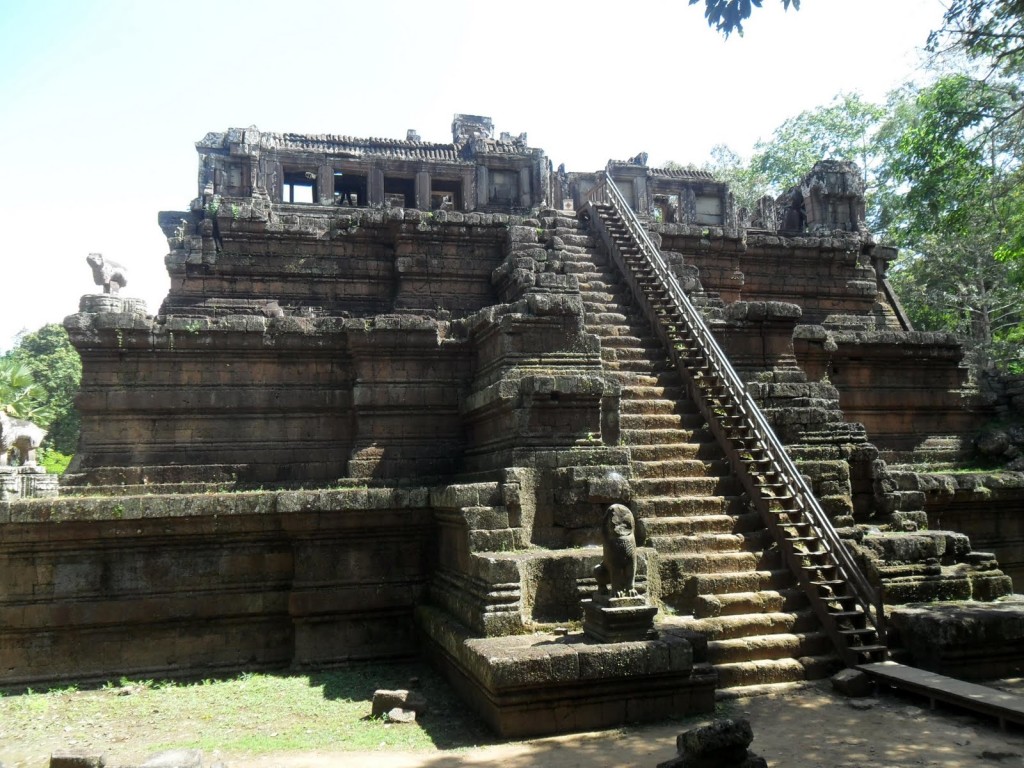 This royal temple palace was built during the 10th century by King Rajendravarman II and added to later by Jayavarman VII. Dedicated to Hinduism, it is also known as the Celestial Palace, and is associated with the legend of a golden tower that once stood here, and where a nine-headed serpent resided. This magical serpent would appear to the king as a woman, and the king would couple with her before going to his other wives and concubines. It was believed that if the king failed to sleep with the serpent-woman, he would die, but by sleeping with her the royal lineage was saved.

The pyramid-shaped palace is rectangular at the base, and surrounded by a 5-m (16-ft) high wall of laterite enclosing an area of around 15 ha (37 acres). It has five entranceways, and the stairs, which are flanked by guardian lions, rise up on all four sides. There are corresponding elephant figures at each of the four corners of the pyramid. The upper terrace offers great views of the Baphuon to the south. 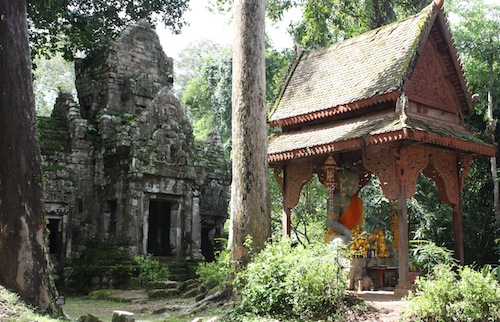 Two of the lesser, yet still impressive structures at Angkor Thom, Preah Palilay and Tep Pranam are located a short distance to the northwest of the Terra of the Leper King.

Preah Palilay dates from the 13th or 14th century and is a small Buddhist sanctuary set within a 164-ft (50-m) square laterite wall. The sanctuary, which is partially collapsed, is entered via a single gateway, and rises to a tapering stone tower. A 33-m (108-ft) long causeway leads to a terrace to the east of the sanctuary, which is distinguished by fine naga or serpent balustrades. Nearby, to the east, lies Tep Pranam, a Buddhist sanctuary built in the 16th century. This was probably originally dedicated to the Mahayana school Now used as a place of Theravada worship, it features a big sandstone Buddha image, seated in the “calling the earth to witness” mudra (posture).

Terrace of the Leper King 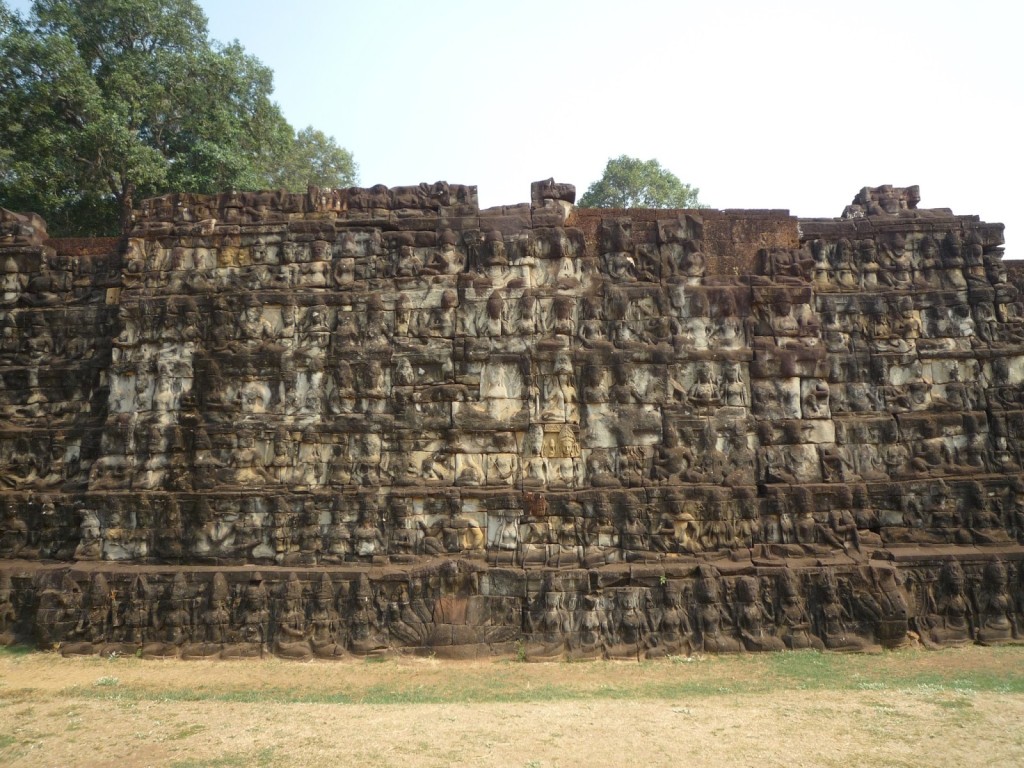 Terrace of the Leper King

Situated a short walk southeast of Tep Pranam, this small platform dates from the late 12th century. Standing on top of this structure is a headless statue, known as the Leper King. Once believed to be an image of King Jayavarman VII who, according to legend, had the disease, it is in fact a representation of Yama, the Hindu God of the Underworld. This statue is, however, a replica, as the original was taken for safekeeping to Phnom Penh‘s National Museum.

The terrace is marked by two walls, both beautifully restored and decorated with exquisite bas-reliefs. Of the two, the inner one is more remarkable and is covered with figures of underworld deities, kings, celestial females nagas with five, seven, or nine heads, devadas, apsaras, warriors with drawn swords, and strange marine creatures.

The exact function of this terrace, which appears to be an extension of the Terrace of Elephants, is not clear. It was probably used either for royal receptions or cremations. 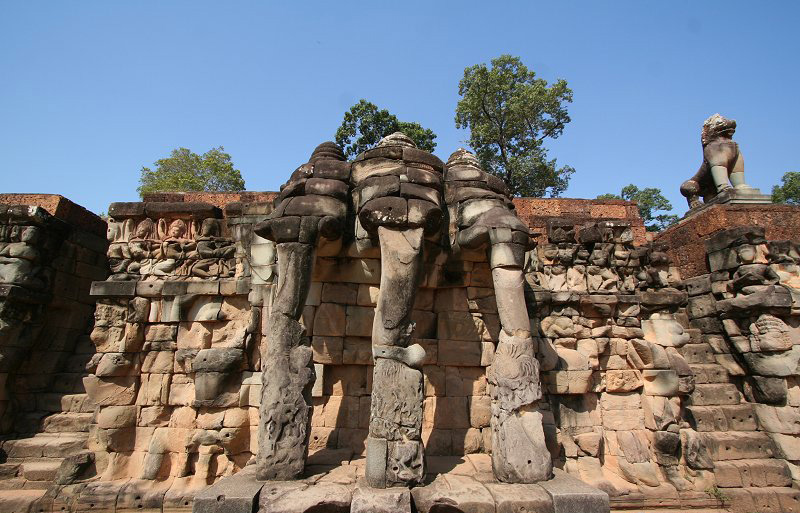 Built by King Jayavarman VII this structure is over 300 m (950 ft) long, stretching from the Baphuon to the connecting Terrace of the Leper King. It has three main platforms and two smaller ones. The terrace was primarily used for royal reviews of military and other parades. The entire terrace is elaborately decorated with almost life-size images of sandstone elephants in a procession and accompanied by mahouts. There are many images of tigers, lions, serpents, sacred geese, and Garuda, the eagle mount of Vishnu. 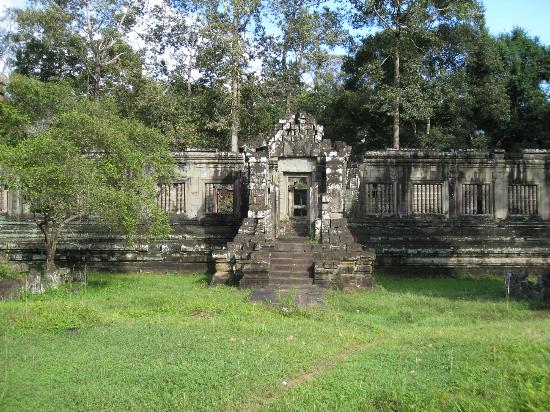 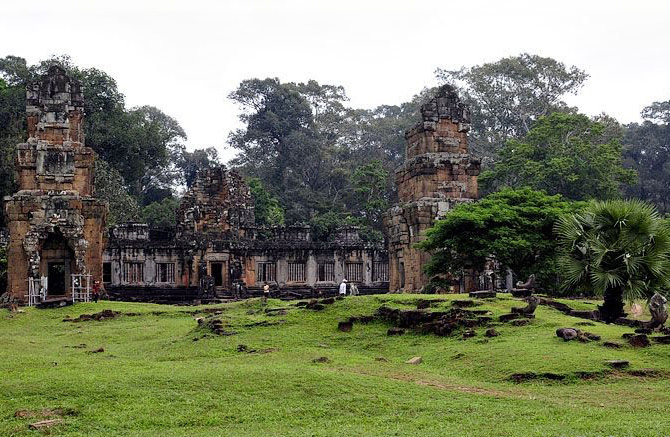 These two essentially similar buildings are located to the east of the main road running past the Terrace of Elephants. The North Khleang was built toward the end of the 10th century by King Jayaviravarman, and the South Khlean was constructed during the early 11th century by King Suryavarman I (r.1002-50). The main architectural feature of the Khleangs are their sandstone lintels and elegant balustered stone windows. Unfortunately, the original function of the buildings is not yet known. Khleang, which means storehouse, is a modern designation and is considered misleading.

Angkor, The Ancient Capital of The Great Khmer Empire

Angkor Wat, The Single Largest Religious Monuments in the World