Ratanakiri is like another planet compared to the rest of Cambodia: dusty, red roads curl through the landscape in summer, while in the rainy season the area becomes lush and green turning the roads into slippery mush.

Adventure enthusiasts won’t be disappointed, with waterfalls to discover, ethnic minorities to meet, elephants to ride, river trips to take and the beautiful Yaek Lorn volcanic lake to take a dip in. Be warned: get there soon as a major new road linking Ban Lung to the outside world is now under construction. Once this has been completed Ban Lung is likely to obscure into just another provincial town.

Ban Lung and around 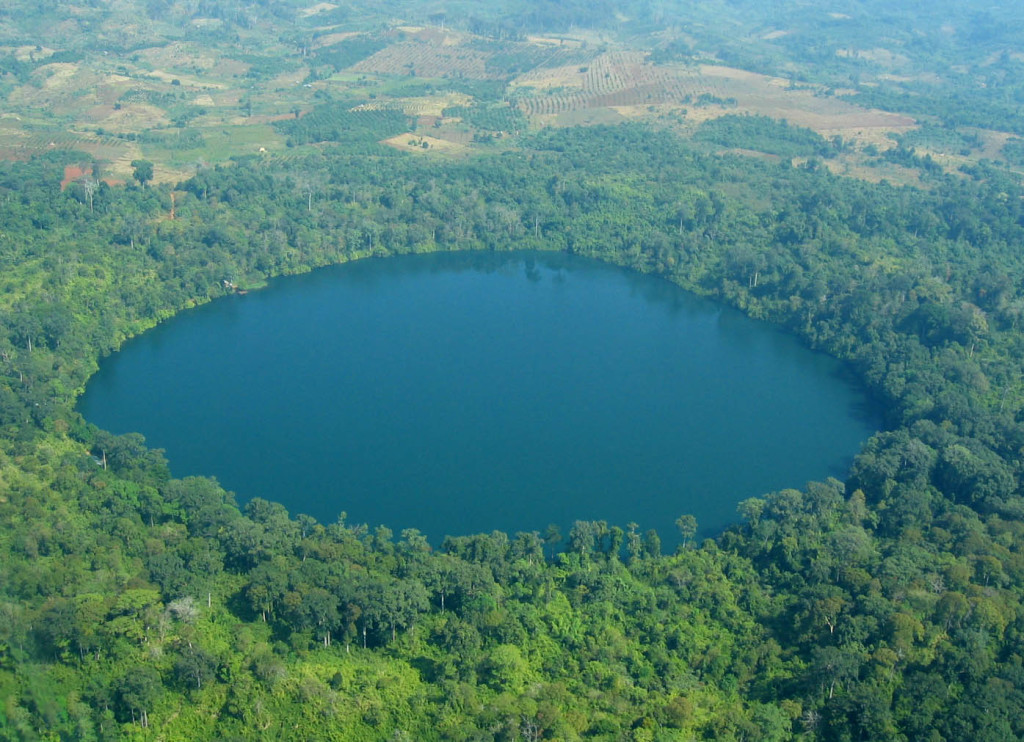 Ban Lung has been the dusty provincial capital of Ratanakiri Province ever since the previous capital Lumphat was flattened by US bombers trying to ‘destroy’ the footpaths and tracks that made up the Ho Chi Minh Trail. The dirt tracks that used to suffocate the town with their dry season dust and wet season mud have now been mostly paved, making a visit here more feasible. The town is situated on a plateau dotted with lakes and hills, many of great beauty, and serves as a base from which visitors can explore the surrounding countryside. With the Vietnamese in the east building a road from the nearby Le Thanh/O Yadao border crossing, plans to pave the existing roads into and out of Ban Lung, and a burgeoning tourist market, mark this part of Cambodia for dramatic change. At present you’ll find basic guesthouse accommodation, and food and drink can be obtained in town.

Arriving in Ban Lung Ban Lung is 13 hours from Phnom Penh. It is better to break your journey in Kratie and Stung Treng and take a pickup/taxi from there. The chief mode of transport is the motorbike, which comes with a driver, or not, as required. Bus services are sporadic. 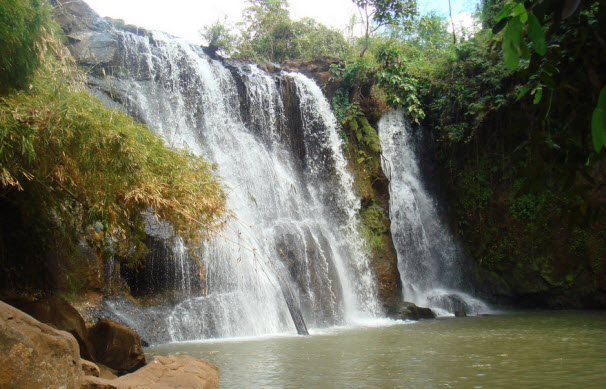 Places around Ban Lung The name Ratanakiri means ‘jewel mountains’ in Pali, and presumably comes from the wealth of gems in the hills, but it could just as easily refer to the beauty of the landscape. Yaek Lom a parking charge of 500 riel, is a perfectly circular volcanic lake about 5 km east of town and easily reached by motorbike. The crystalline lake is rimmed by protected forest dominated by giant emergents (dipterocarps and shoreas) soaring high into the sky. It takes about one hour to walk around the lake: in doing so you will find plenty of secluded bathing spots, a couple of small jetties and, given the lack of water in town, it is not surprising that most locals and visitors bathe in the wonderfully clear and cool waters of the lake. There is a small ‘museum’ of ethnography and a couple of minority stilt houses to be seen.
There are three waterfalls 2000 riel each, in close proximity to Ban Lung tow Kachaang Waterfall is 6 km away. The 12-m-high waterfall flows year round and surrounded by magnificent, pristine jungle shrouded in mist. Katien Waterfall is a little oasis 7 km northwest of Ban Lung. Believed to have formed from volcanic lava hundreds of years ago, the 10-m plunging falls are sheltered from the outside world by a little rocky grotto. It is one of the better local falls to swim in as it is very secluded (most people will usually have the area to themselves) and the water is completely clean. The best waterfall is arguably Chaa Ong Falls, with the 30-m falls plunging into a large pool. Those games enough can have a shower behind the crescent-shaped ledge. To get to the waterfalls, follow Highway 19 out of town and branch off 2 km out on the main road in the first village out of Ban Lung: Chaa Ong Falls are 9 km northwest at the intersection, turn right at the village and head for about 5 km to head to Katien Waterfall (follow the signs), the same road heads to Kachaang Waterfall. 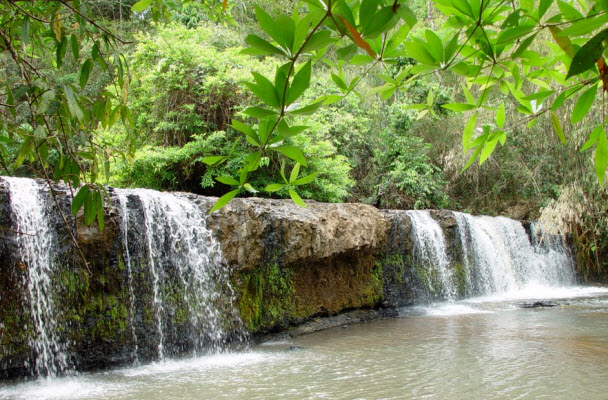 The trip to Ou’Sean Lair Waterfall, 35 km from Ban Lung, is a wonderful day excursion offering a fantastic cross-section of what is essentially Ratanakiri’s main attraction (without the riverside element). From Ban Lung, fields of wind-bent, spindly rubber trees provide a canopy over the road’s rolling hills, a legacy left from the French in the 1960s. Punctuating the mottled natural vista is an equally diverse range of ethnic minority settlements. Tampeun and Kreung villages are dotted along the road and about halfway (17 km from Ban Lung), in a lovely valley, is a tiny Cham village. The perfect end to the journey is the seven-tiered Ou’Sean Lair falls. The falls were reportedly ‘discovered’ by a Tampeun villager five years ago, who debated as to whether he should tell the Department of Tourism of their existence. In return for turning over the falls, they were named after him. The falls are most spectacular in the wet season but are still pretty alluring during the dry season.