The ancient capital of the great Khmer Empire, Angkor is beyond doubt, one of the most magnificent wonders of the world and a site of immense archaeological significance. Located in dense jungle on the hot and torpid plains of western Cambodia, its awe-inspiring temples transport visitors into an enchanting and mysterious word of brooding grandeur and past glory. 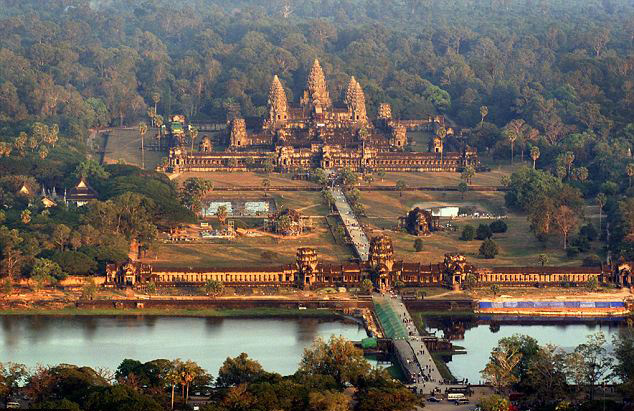 Situated in southwestern Indochina, the flat, low-lying country of Cambodia covers an area of about 180,000 sq km (69,500 sq miles), bordering Laos to the north, Thailand to both the north and west, and Vietnam to the east Although Cambodia’s capital is now Phnom Penh, this title was once held by Angkor. For nearly six centuries, between AD 802 and 1432, it was the political and religious center of the great Khmer Empire, which once extended from the South China Sea almost to the Bay of Bengal The remains of the metropolis of Angkor now occupy 200 sq km (77 sq miles) of northwest Cambodia, and although its old wooden houses and palaces decayed centuries ago, the stunning array of stone temples erected by a succession of self-styled god-kings still stand. Set between two baray or reservoirs Angkor today contains around 70 temples, tombs, and other ancient ruins. Among them is the stunning Angkor Wat, the world’s single largest religious complex. 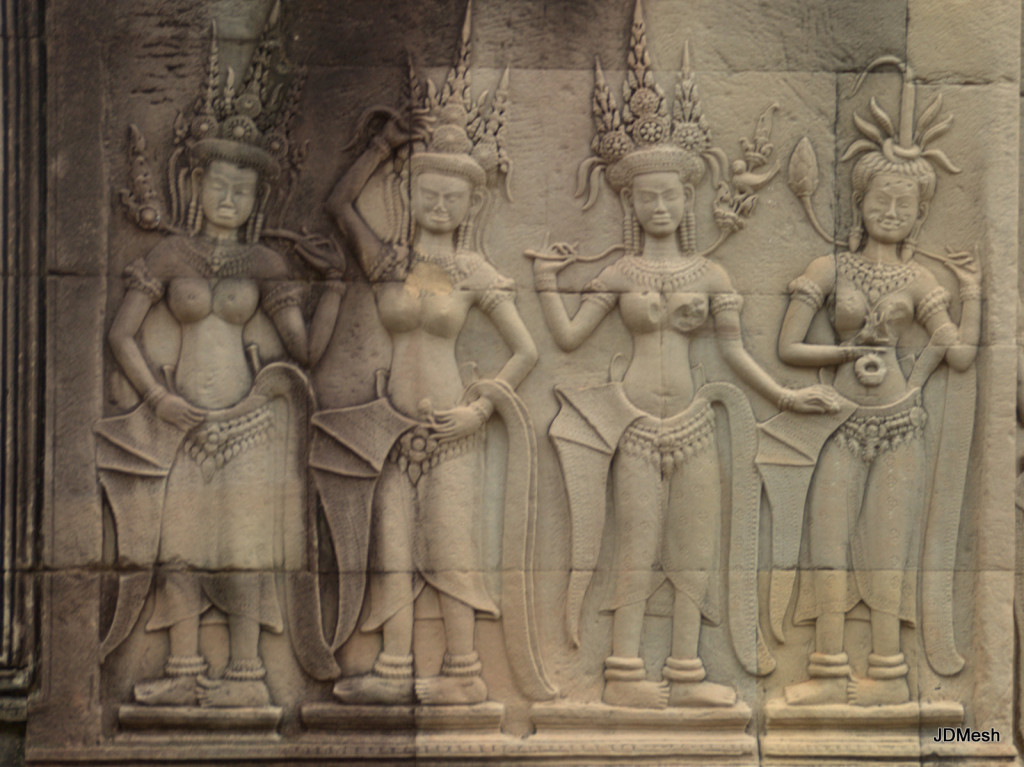 Wall carvings at Angkor Wat Temple, Angkor Wat, and numerous other temples tell the stories of war, religion, and every day life in these societies.

Ancient Cambodia was highly influenced by South Asia, and Hindu gods such as Vishnu and Shiva were revered. From the 10th century AD onward, Buddhism gradually began to spread throughout the Khmer Empire, receiving a significant boost during the reign of Angkor monarch Jayavarman VII (r.1181-1215). As the two religions flourished, Angkorian architecture incorporated elements from both Hinduism and Buddhism. Eventually, Theravada Buddhism or the Way of the Elders emerged as the predominant school, and replaced Hinduism as the national religion. 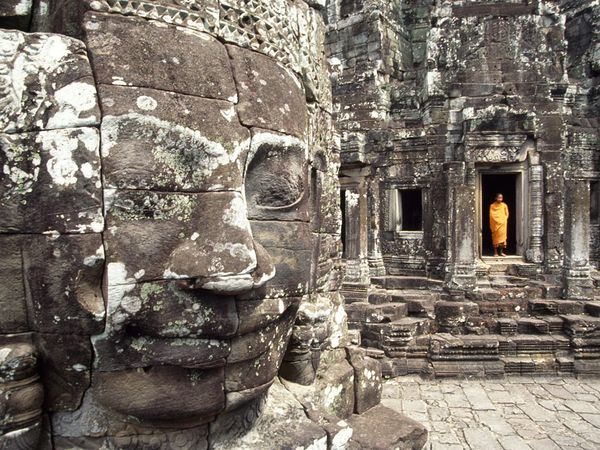 The Khmer Empire was founded in the beginning of the 9th century AD, when Jayavarman II (r.802-850) proclaimed himself devaraja or the divine king of the land. A follower of Shiva, he built a gigantic, pyramidal temple-mountain representing Mount Meru, the sacred mythical abode of the Hindu gods.
This structure laid the foundation of Angkor’s architecture. His successor, Indravarman I (r.87789) expanded the empire, but it was Yasovarman I (r.889-910) who shifted the former capital at Roluos to Angkor He established his new seat of power by constructing a magnificent temple on the hill of Phnom Bakheng and another one on the massive East Bara Angkor’s grandest structures, Angkor Wat was built by Suryavarman II (r. 1113-50), and Angkor Thom by Jayavarman VII. Following Jayavarman VII’s death, Angkor entered a long era of decline, lying forgotten as Thai invaders ravaged the land.
It was not until the 19th century that spellbound European explorers stumbled upon Angkor. Following their “discovery”, the ancient city underwent a period of restoration until the mid-20th century, when it disappeared again behind a curtain of war. During the Vietnam War, Vietnamese communists used Cambodia as a staging post, and the US responded with large-scale bombings, killing thousands of Cambodians, and giving rise to Pol Pot’s Khmer Rouge. This extreme Maoist party seized power in 1975, and by the time it was overthrown by the Vietnamese in 1979, it had killed an estimated two million Cambodians in one of the worst acts of genocide in history. 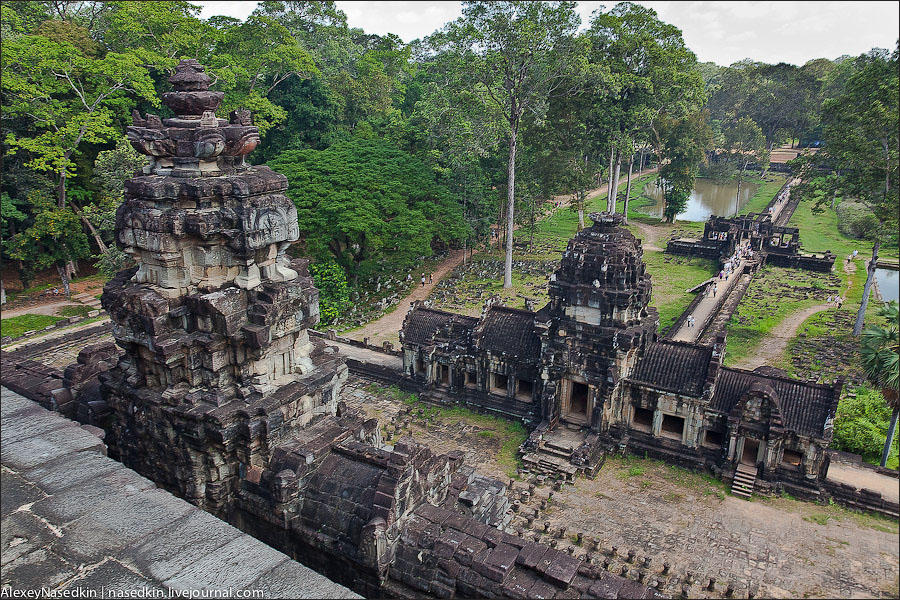 Crowns the building is such a construction. Incidentally, an interesting point during the global restoration was put together by the type designer, composed more than 300 000 sandstone blocks.

Since the collapse of the Khmer Rouge in the early 1990s, Angkor has gradually reopened to the world miraculously, in a nation so devastated by war the great temple complexes have survived remarkably unscathed today, after painstaking clearance of unexploded ordinance and dense vegetation, restoration and conservation are once again in full swing. One of the most important archaeological sites in the world, Angkor attracts millions of visitors each year, providing a substantial boost to Cambodia’s economy. 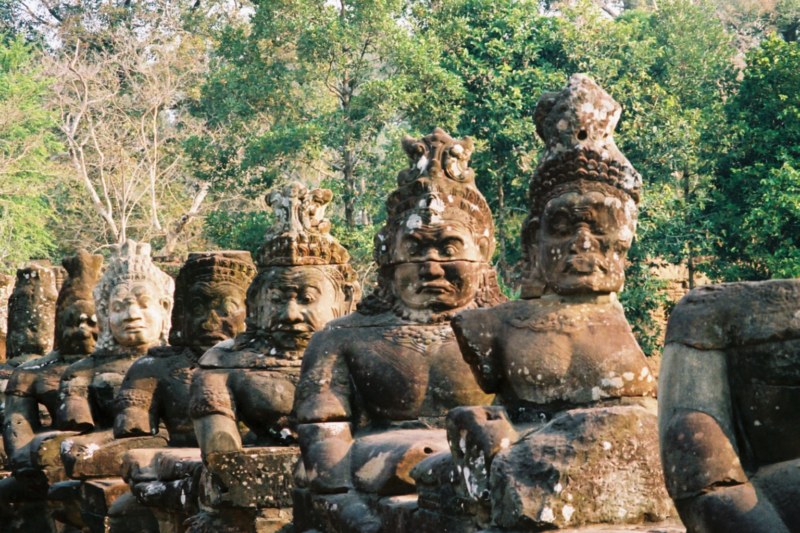 Angkor had been chosen as the Court under the reign of Jayavarman II.

Set among dense green forests and neat rice paddies, the massive monuments at Angkor are arguably the most remarkable and striking architectural masterpieces in Southeast Asia. Located north of Siem Reap, in the heart of Angkor, the vast Angkor Wat complex, with its imposing towers, and the great city of Angkor Thom, with its impressive causeway and gigantic smiling faces of the Bayon, are breathtaking sights, especially during sunrise or sunset. Farther north are the smaller yet unique temples of Preah Khan and Preah Neak Pean. To the east of Angkor Thom is the magical Ta Prohm, with large trees growing through the temple walls. Farther out, the pink sandstone structure of Banteay Srei lies to the northeast, while to the southeast are the ruins of the Roluos Group, the oldest in Angkor. 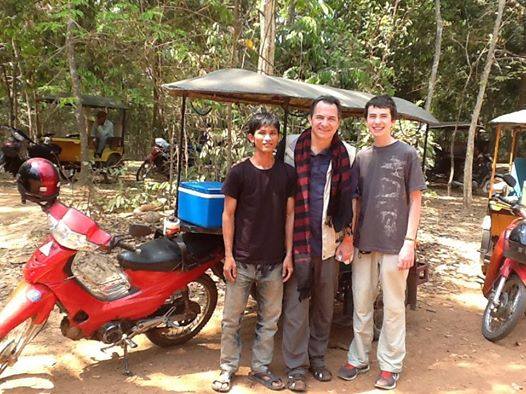 Getting around Angkor by tuk tuk, a traditional vehicle of Cambodian

The temples at Angkor require both time and motorized transport to visit. It is possible to visit the main sites by motorbike, but the best way to travel in this hot and dusty area is in an air-conditioned car with a drive. In colonial times, the French defined two circuits, both starting at Angkor Wat, which are still used today. The 18-km (11-mile) “small circuit” takes at least a day and covers the central temples of the complex, continuing to Ta Prohm, before returning to Angkor Wat by way of Banteay Kdei. The “great circuit”, a 27-km (17-mile) route, takes in the small circuit as well as the outer temples, going past Preah Neak Pean to Ta Som before turning south to Pre Rup. It takes at least two full days.

Ha Long Bay, One of The Most Beautiful Coast of Vietnam