The French called them Montagnards, or “people of the mountains,” and these groups have long suffered under more powerful central governments. Hill tribe people paid dues to early Vietnamese kings and later achieved some autonomy under the French, who converted them to Catholicism and then conscripted them into labor on roads and bridges in the region. Alliances with American or North Vietnamese forces were just another form of conscription. 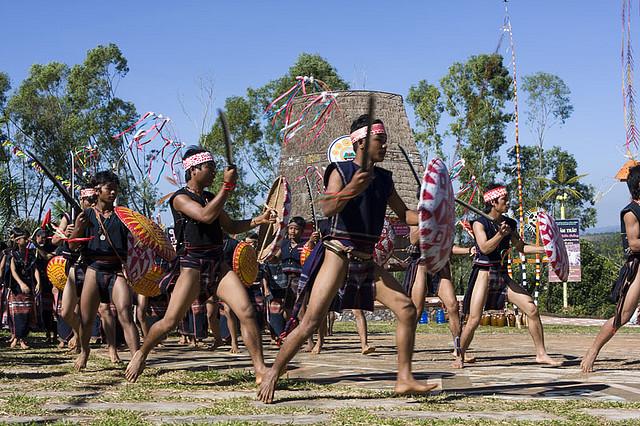 A tradition festival in Central Highland of Vietnam

The Northern Highland groups see chapter 6 is known for their more colorful traditional dress, while Central Highland hill tribe people, particularly the men in their Western attire, are often indistinguishable from lowland Vietnamese. But having endured so much for some measure of autonomy, these feisty highlanders still cling to tradition.

The ethnic minorities of the Central Highlands the M’nong, the Ede, and the Bannar, among others have as much in common as they do differences from one another. Most villages are of thatched single-family houses arranged around a central communal longhouse (called a nha rang in Vietnamese) raised on stilts at the center of town, where all ceremony and governance take place. Each group has a particular style of nha rang, the most dynamic being the Bannar style of a peak of thatch over three stories high, but each kind of nha rang is an important symbol of community-respective groups and the center of worship and colorful ceremony. Many hill tribe groups celebrate harvest time or auspicious occasions with the ritual slaughtering of a buffalo, a frenetic event soaked in local whiskey and accompanied by wild dance. Music is important to each group, and each has strong traditions like the Jarai, who woo their brides by serenading, and the M’nong, famed for their drumming.

Many hill tribe groups are matrilineal, where names and even fortunes are passed from generation to generation from mother to child, and almost all practice some kind of animist religion, in which gods are the hills themselves or the natural forces that made them. Funeral ceremonies vary, but all of the Central Highland groups practice elaborate graveside rights, where bodies are interred in elaborate spirit houses decorated with ceremonial carvings and paintings, and later feted and celebrated to the funeral pyre or grave. Musical traditions among hill tribes are elaborate, with gongs, drums, and bamboo flute music integral parts of any ceremony.

Catholic missionaries had varied success bringing the good word to these remote, autonomous groups, and the legacy of their efforts still stands in the many churches, orphanages, and missions throughout the region (check out the Mission School in Kontum). Ede and Bannar people are among the most commonly converted. Minority groups in the region retain their ethnic traditions and some territorial autonomy, though investments from the Hanoi government have focused more on “enforced primitivism” programs and segregated villages (many open for tour-group visits). Opportunities to visit with these minority groups are many, and below is just a short breakdown of each group.

Important: Be very careful when photographing ethnic minorities. Few in the region are at all used to tourists, and there are many taboos about photography and collecting images of people. Always ask and respect an answer of “No. “Often patient persistence pays off stay, and talk to people and explain where you’re from and what you’re doing I’ve often been asked to take a photo by someone after I was initially denied the shot. 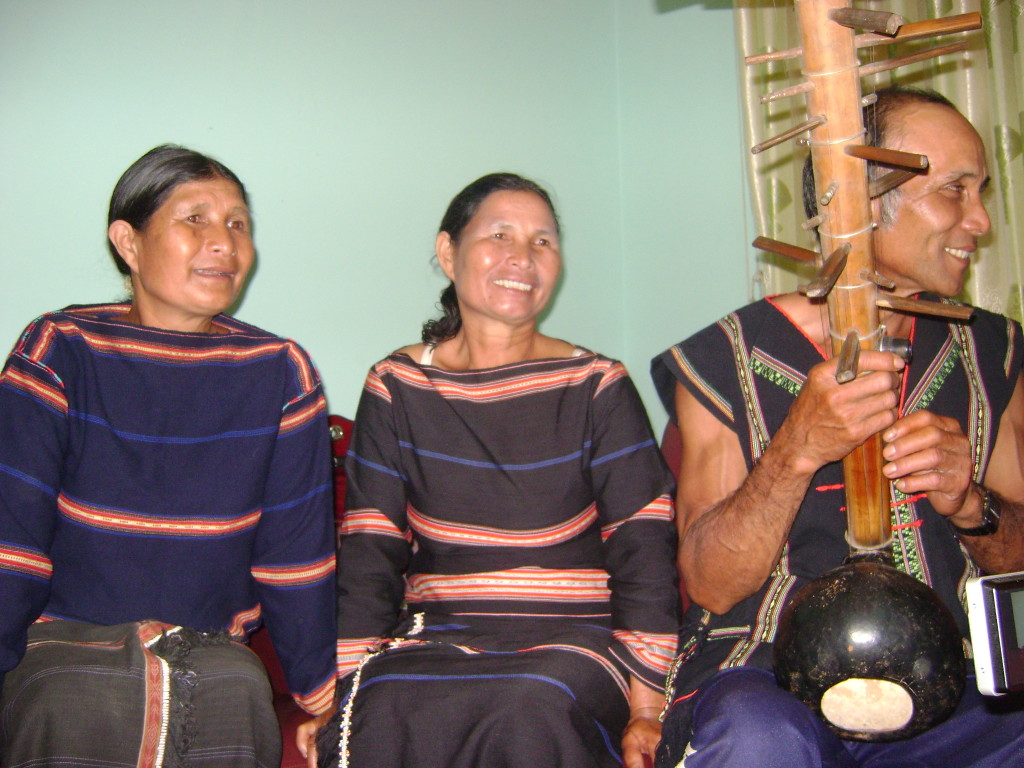 Jarai With an estimated population over 300, 000, the Jarai are the largest group in the highlands. Villages are situated around a central longhouse where village elders hold court over local polity. Jaral people are animistic, with powerful gods of the wind, water, and the mountains. Complex Jarai funeral practices start with interring a body in a small spirit house surrounded by a person’s effects and ritual statues, followed by cremation. Jarai society follows a matrilineal succession, meaning that family names are passed on from mother to child, and there’s a kind of egalitarianism to cooperative villages of hunter-gatherers, river fishermen (villages are usually near water), and subsistence farmers. Jarai people are rumored to have migrated from the central coast long before the “Chinese millennium” some 2, 000 years ago, and settled near Pleiku and Kontum, where most Jarai people are found today. Jarai musical talents are renowned (see a whole set of Jarai drums and gongs in the small Hill tribe Museum in Buon Ma Thuot). 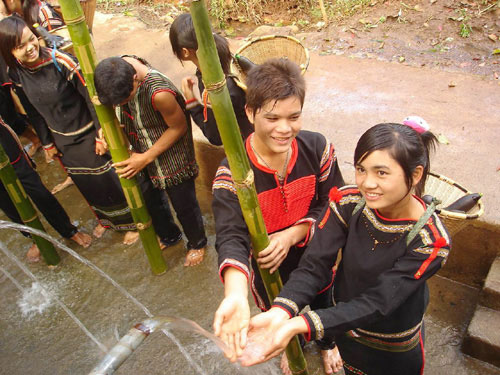 The Ede Ethnic Group in Vietnam

Ede The second-largest group in the highlands, Ede have a society quite similar to the Jarai (see above), which centers around a village longhouse on stilts, with one window per family and a large section set aside for communal work and governance. Ede is matrilineal and follows rich animistic traditions like the Jarai. Find Ede villages on the outskirts of Buon Ma Thuot, mostly in situations of “enforced primitivism” under the watchful eye of the party. 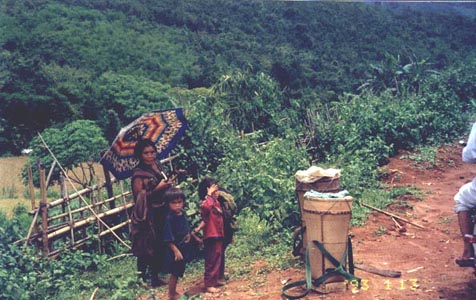 Sedang Sedang is notorious warriors. Once known to practice human sacrifice, the Sedang were heavily conscripted as fighters by all sides: the French, the U. S., and North Vietnam. Sedang people follow a model of pure egalitarianism in village governance and duties. Find Sedang settlements in and around Kontum, with settlements as far as the Quy Nhon coastal area. 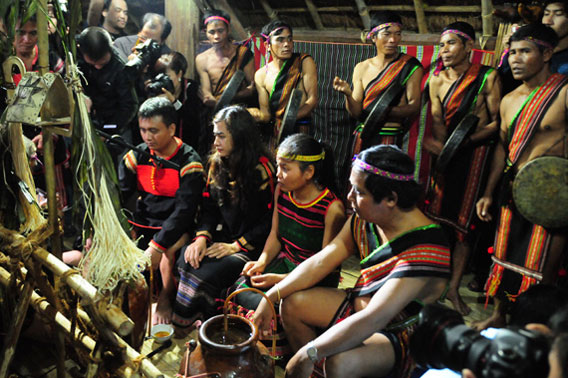 M’nong You will likely meet M’nong people, the elephant hunters and wranglers of the region, at Lak Lake when you get ferried out across the water by elephant. M’nong are matrilineal and known for their fine small-craft production and distinct percussion music. The M’nong practice elaborate funeral rituals placing a coffin in a funeral house decorated with wooden statues before burial. 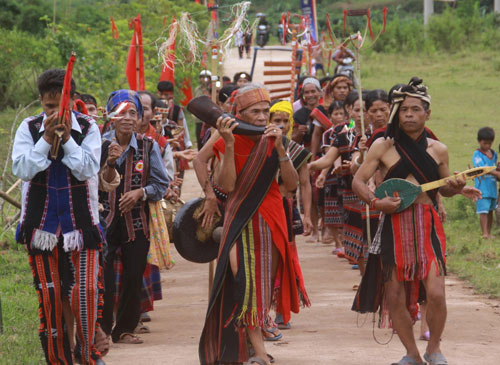 Bru & Taoi Two related groups living in the northern end of the highlands, the Bru and Taoi originally inhabited lands near the 17th Parallel, which meant that villages were swallowed in the destruction, and those that didn’t flee farther south or to Laos (mostly Bru) were caught up as conscripts of the North Vietnamese (mostly Taoi) and played an important role in keeping the Ho Chi Minh supply line moving. Find Bru peoples in and around Khe Sanh.