Arriving in Vientiane
Getting there by air Most visitors arrive in Vientiane by air, the great bulk on one of the daily connections from Bangkok, with Thai Air (www.thaiair.com) or Lao Airlines (www.laoairlines.com); the latter also runs international flights from Thailand, Cambodia, Vietnam, Singapore and China. Vietnam Airlines (www.vietnamairlines.com) runs flights from Hanoi and Ho Chi Minh City. AirAsia (www.airasia.com) flies from Kuala Lumpur and Lao Central Airlines flies to Singapore. 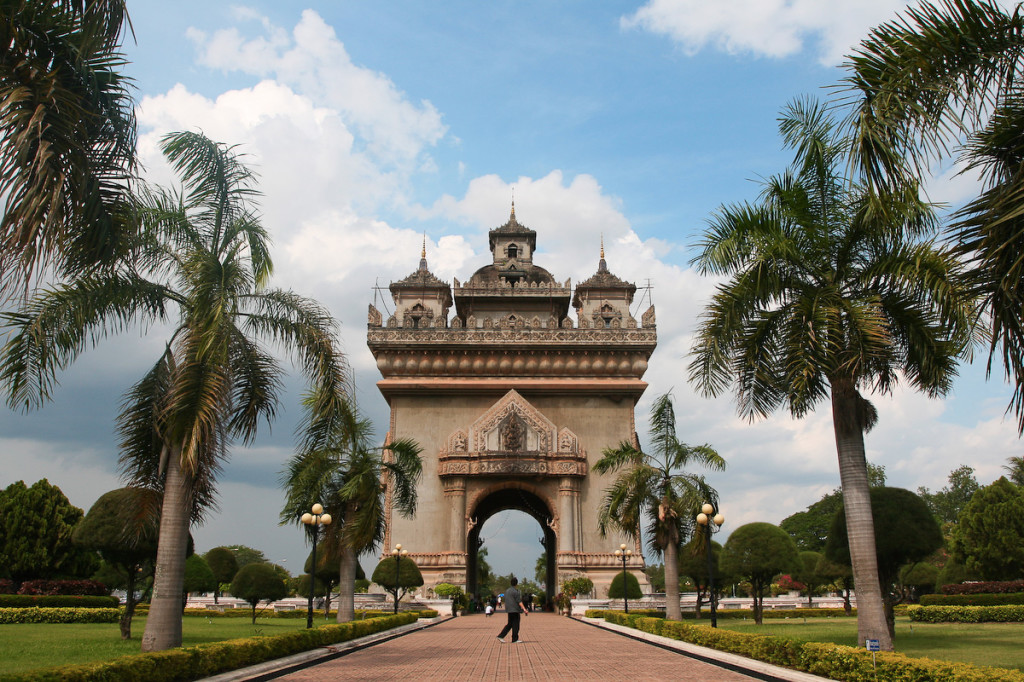 Vientiane is the hub of Laos’ domestic airline system and to travel from the north to the south or vice versa (except for the Pakse-Luang Prabang route) it is necessary to change planes here. Only taxis are allowed to pick up passengers at the airport, although tuk-tuks can drop off here. But tuk-tuks can be taken from the main road and sometimes lurk at the far side of the airport parking area, near the exit.

A cheaper alternative from Thailand is to fly from Bangkok to Udon Thani (Thailand) on a budget airline such as NokAir (www.nokair.com) or AirAsia (www.airasia.com) and then continue by road to Vientiane via the Friendship Bridge, which lies just 25 km downstream from the capital (allow three hours). Shuttle buses from Udon Thani run between the bus station and the border. There are several flights a day between Udon Thani and Bangkok.

Getting there by bus There are three public bus terminals in Vientiane. The Southern bus station, for destinations in the south of the country, is 9 km north of the city centre on Route 13. Most international buses bound for Vietnam depart from here as well as buses to southern and eastern Laos. The station has a VIP room, restaurants, a few shops, and mini-mart and there’s a guesthouse nearby.
The Northern bus station is on Route T2, about 3 km northwest of the centre before the airport, and serves destinations in northern Laos. Most tuk-tuks will take you there from the city; ask for ‘Bai Thay Song’. There are English- speaking staffs at the help desk.

A third bus station is across the road from the Morning Market, in front of Talaat Kudin, on the eastern edge of the city centre. This station serves destinations within Vientiane Province, buses to and from the Thai border and international buses to Nong Khai and Udon Thani in Thailand. It is also a good place to pick up a tuk-tuk.

Getting around Vientiane is small and manageable and is one of the most laid-back capital cities in the world. The local catch phrase ‘bopenyang’ (no worries) has permeated through every sector of the city, so much so that even the mangy street dogs look completely chilled out. The core of the city is negotiable on foot and even outlying hotels and places of interest are accessible by bicycle. Cycling remains the most flexible way to tour the city.lt can be debilitating hot at certain times of year but there are no great hills to struggle up. If cycling doesn’t appeal, a combination of foot and tuk-tuk or small 110- 125cc scooters take the effort out of sightseeing.
Vientiane can be rather confusing for the first-time visitor as there are few street signs and most streets have two names (pre- and post-revolutionary) but, because Vientiane is so small and compact, it doesn’t take long to get to grips with the layout. The names of major streets or than on usually correspond to the nearest wat, while traffic lights, wats, monuments and large hotels serve as directional landmarks. When giving directions to a tuk-tuk it is better to use these landmarks, as street names leave them a little bewildered.

Pha That Luang in Vientiane, Laos

Background
Vientiane is an ancient city. There was probably a settlement here, on a bend on the left bank of the Mekong, in the 10th century but knowledge of the city before the 16th century is sketchy. From the chronicles, scholars do know that King Setthathirat decided to relocate his capital here in the early 1560s. It seems that it took him four years to build the city, constructing a defensive wall (hence ‘Wiang’, meaning a wailed or fortified city), along with Wat Phra Kaeo and a much enlarged That Luang. Vieng Chan remained intact until 1827 when it was ransacked by the Siamese; this is why many of its wats are of recent construction.
The city was abandoned for decades and erased from the maps of the region. It was only conjured back into existence by the French, who commenced reconstruction at the end of the 19th century. They built rambling colonial villas and wide tree-lined boulevards, befitting their new administrative capital, Vientiane. At the height of American influence in the 1960s, it was renowned for its opium dens and sex shows.