All sights in the city center can be reached on foot, but you’ll want to hire a car with a driver or, for the brave, a motorbike taxi to reach sights outside the city center. Tuol Sleng and the Killing Fields can be visited together, and arrangements can be made at any hotel lobby. 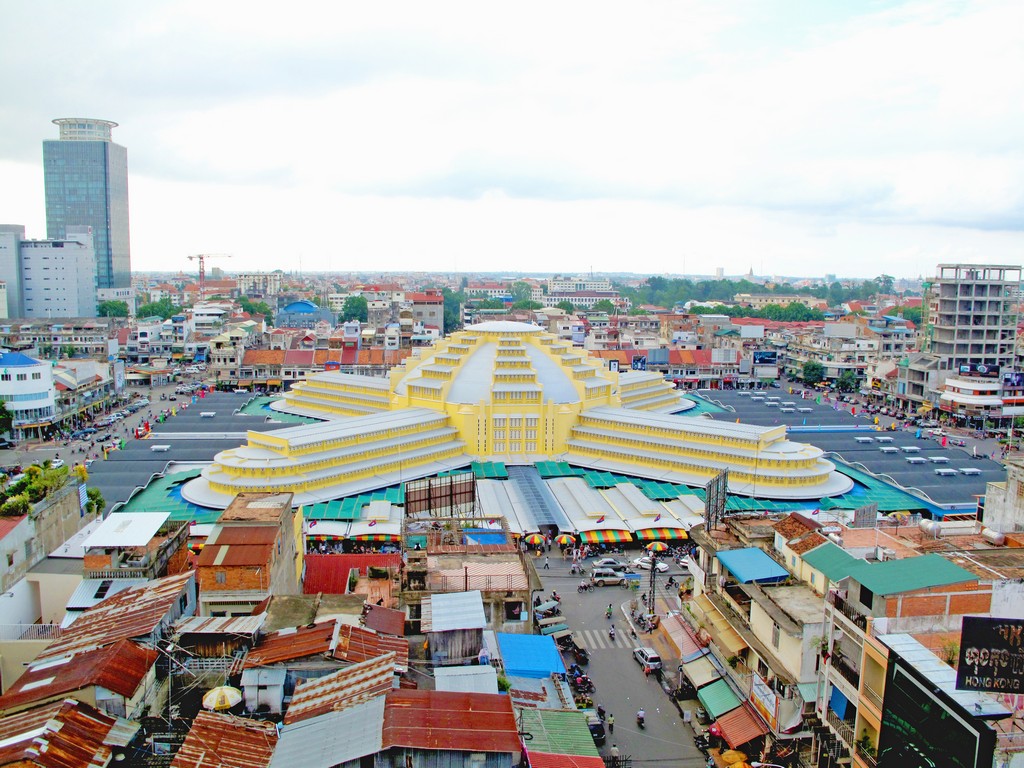 Central Market This Art Deco behemoth, built in 1937, is a city landmark and, on any given day, a veritable anthill of activity. The building is a towering rotunda with busy wings extending in four directions. The eastern entrance is the best spot to find T-shirts, hats, and all manner of trinkets and souvenirs, as well as photocopied bootlegs of popular novels and books on Cambodia. Goldsmiths and watch-repair and sales counters predominate in the main rotunda, and you can find some good deals. Spend some time wandering the nooks and crannies, though, and you’re sure to come across something that strikes your fancy, whether that’s a chaotic hardware shop, a cobbler hard at work with an awl, or just the cacophony and carnival-barker shouts of salesmen and haggling shoppers. Be sure to bargain for any purchase. The Russian Market in the south end of town is comparable and equally worth a visit (it’s a good stop on the return trip from the Killing Fields).
Btw. streets 126 and 136 in the town center. Dally 5am-5pm. 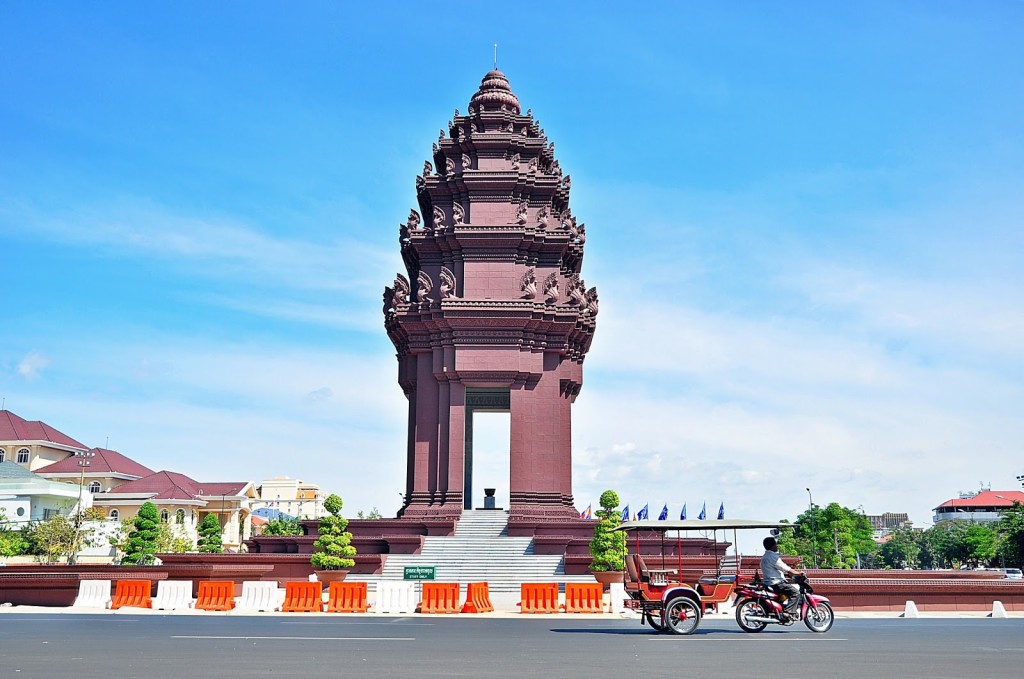 Independence Monument Built in the late 1950s to commemorate Cambodia’s independence from the French on November 9, 1953, this towering obelisk is crowned with Khmer Nagas and is reminiscent of Angkor architecture and Hindu influence. The area is at its most majestic when all lit up at night (or from afar while squinting).
South of the town center at the intersection of Norodom and Sihanouk. 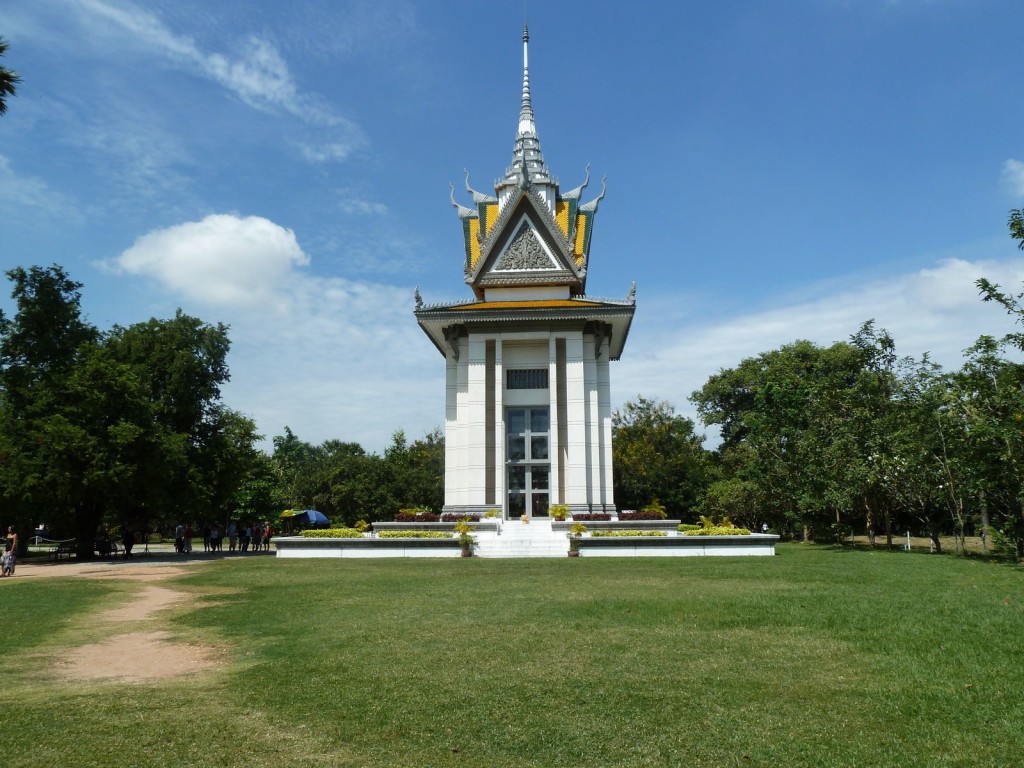 The Killing Fields & Choeung Ek Memorial Originally a Chinese cemetery before becoming the execution grounds for the Khmer Rouge during their maniacal reign under Pol Pot from 1975 to 1979, the site is a collection of mounds, mass graves, and a towering monument of cataloged human skulls. The monument is 17 stories high, reminding visitors of April 17, 1975, the day the Khmer Rouge took over Cambodia. As a sign of respect, you take your shoes off before mounting the steps to view the monument up close. Human skulls, arranged by age and gender, are arranged at eye level, while other bones are placed on higher levels. The Killing Fields are often visited in conjunction with a tour of Tuol Sleng (see below).
15km (9,25 miles) south of Phnom Penh. Arrange a private car or motorbike. Free admission, but guides are available (highly recommended) in exchange for donations. Daily 7: 30am-5: 30pm.

National Museum What the British Museum is to the Elgin Marbles of Greece’s Parthenon, the National Museum of Phnom Penh, opened in 1920 by King Sisowath, is to the statuary of Angkor Wat. This important storehouse holds artifacts and statuary from all regions of Cambodia. The sad fact is that many pieces didn’t make it here—they were plundered and smuggled out of the country. Nevertheless, this grand red sandstone edifice has a beautiful and informative collection of Khmer pieces. From the entrance, begin on your left with a room of small prehistoric artifacts. A clockwise loop around the central courtyard walks you through time, from static, stylized pieces of stiff legged, standing Buddhas, to contraposed and contorted forms in supplication. There are good accompanying descriptions in English, but this is not a bad place to have a knowledgeable guide (ask in the lobby). The central courtyard features a shiva lingum and large temple fragments. At the more significant works—the statue of Jayavarman VII, for example—elderly ladies, looking like museum docents, hand out incense and flowers and instruct visitors to place them on makeshift altars. Don’t feel obliged, but feel free to do so and just drop a few Riel or even $1.
Just north of the Royal Palace at Street 178, a short walk from the river. Daily 8am-5pm. 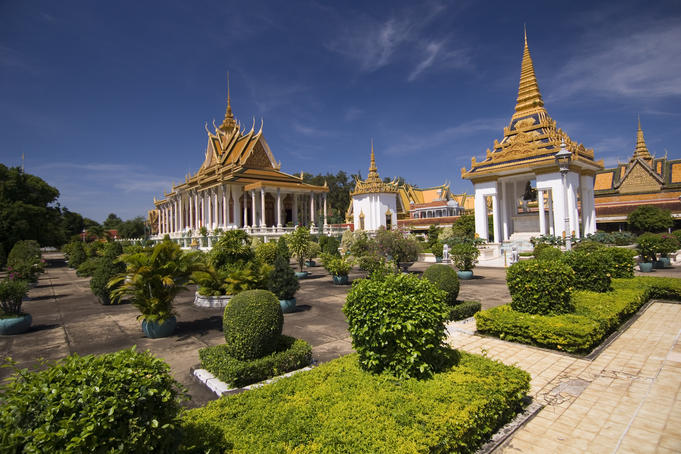 Royal Palace and Silver Pagoda Don’t miss this glittery downtown cam pus, the ostentatious jewel in the crown of Cambodia’s monarchy. Built in the late 1860s under the reign of Norodom, the sight is comprised of many elaborate gilded halls, all with steep tile roofs, stupa-shape cupolas, and golden temple nagas denoting prosperity. The grand Throne Hall at the center is the coronation site for Khmer kings and the largest gilded cathedral in the country. Don’t miss the many royal busts and the gilded umbrella used to shade the king when in procession. The French built a small exhibition hall on the temple grounds, a building that now houses the many gifts given to the monarchy, among them cross-stitch portraits of the royal family and all manner of brica-brac. Just inside the door, don’t miss an original by Cezanne that has suffered terrible water damage and hangs in a ratty frame like an unwanted diploma: a shame. The balcony of the exhibition hall is the best bird’s-eye view of the gilded temples. The facade of the neighboring Royal Residence is just as resplendent and is still the home of the now abdicated King Sihanouk and his son and successor.

The Silver Pagoda is just south of the palace, and entrance is included with the same ticket. The floors of this grand temple are covered with 5, 000 blocks of silver weighing more than 6 tons. The temple houses a 17th-century Buddha made of Baccarat crystal, and another made almost entirely of gold and decorated with almost 10, 000 diamonds. That’s not exactly what the Buddha had in mind, perhaps, but it’s quite beautiful. The temple courtyard is encircled by a covered walkway with a contiguous mural of Cambodia’s history and mythology. On the southern end of the complex is a small hill covered in vegetation and said to model the sacred Mount Meru; there’s a large Buddha footprint and a small temple that provokes devout practice in Khmer visitors.
Btw. streets 240 and 184 on Sothearos. The entrance is on the east side facing the river. Daily 7: 30-11am and 2-5pm. 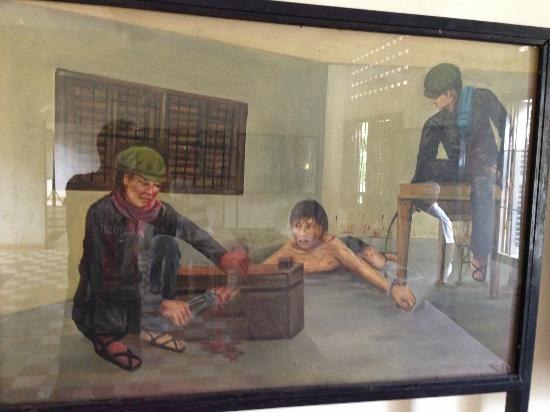 Tuol Sleng, Museum of Genocide The grounds of this former high school are just as they were in 1979 at the end of Cambodia’s bloody genocide. During the violent recent history in Cambodia, the two-story compound became one of the most notorious concentration camps, essentially a torture chamber before people were slaugh tered in the Killing Fields. A visit here is a visceral revisit of some horrible events, too much for some visitors. From 1975 until 1979, an estimated 17, 000 political prisoners, most just ordinary citizens, were tortured at Tuol Sleng and died, or were executed in the nearby Killing Fields. If you don’t come with a guide, you’ll certainly want to hire one at the entrance, although you’re free to roam the grounds on your own. Local guides often have personal experience with the prison and are vital sources of oral history. They are open to questions, but go easy on any debate. Recrimination against the arbiters of these horrible events is an important issue here; just as Cambodians hope to move on into the future, they fear revisiting the past in the current international tribunals. The prison population of Tuol Sleng, also known as S-21, was carefully cataloged; in fact, the metal neck brace employed for holding subjects’ heads in place for the admitting photograph is on display. There are some written accounts in English, paintings done by a survivor, and gory photos of the common torture practices in the prison, but perhaps what is most haunting is the fear in the eyes of the newly arrived; one wing of the buildings is dedicated to these very arrival photos. This sight is a bit overwhelming, so be prepared.
South of town at the corner of streets 350 and 113. Daily 8am-noon and 1-5pm. 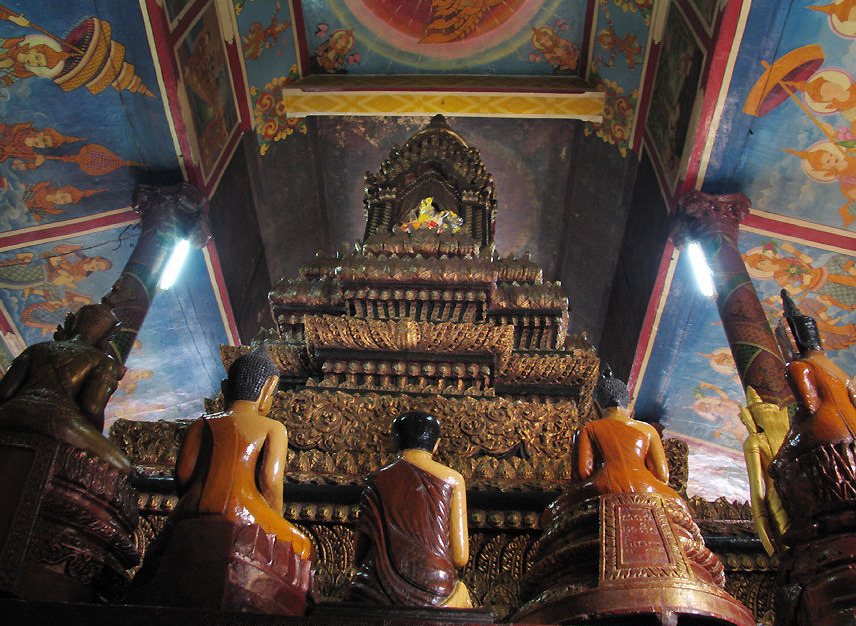 Wat Phnom This is Cambodia’s “Church on the Hill.” Legend has it that some time in the 14th century, a woman named Penh found sacred Buddhist objects in the nearby river and placed them here on the small hill that later became a temple. Phnom, in fact, means “hill, ” so the name of the city translates to “Penh’s Hill. ”
The temple itself is a standard Southeast Asian wat, with Naga snakes on the cornered peaks of the roof and didactic murals of the Buddha’s life done in Day-Glo allegories along interior walls. Don’t miss the central ceiling, which, unlike the bright walls, is yet to be restored and is gritty and authentic.
The hillside park around the temple was once a no-go zone peopled by armed dealers and pimps, and in the evening you should still be careful, but now it’s a laid back little park. You’re sure to meet with some crafty young salesmen who’ll offer you the chance to show your Buddhist compassion by buying a caged bird for a dollar and letting it go; if you stick around long enough, you’ll see the bird return to the cage.
Intersection of Street 96 and Norodom Blvd.

Things to Do and See in Ninh Binh, Vietnam Highlights