Altogether, Laos is said to have some 16 basic weaving styles across four regions. Southern weavers, who often use foot looms rather than frame looms, practice Laos’s most continuous textile traditions in terms’ of styles and patterns, some of which haven’t changed for a century or more.

Southern Laos is known for the best silk weaving and for intricate mat-mii (ikat or tie-dye) designs that include Khmer-influenced temple and elephant motifs. Synthetic and natural dyes are commonly used. In Sekong and Attapei; borders often contain cryptic-looking symbols; the recent introduction of simple helicopter and aero plane motifs suggests the beginnings of a possible post-war cargo cult among the Lao Theung. In these provinces, beadwork is sometimes added to the embroidery. One-piece phaa nung (sarongs) are more common than those sewn from separate pieces.

In North-Eastern Laos, the Thai Neua (especially in Hua Phan’s Sam Neua), Phuan, Thai Lu, Thai Daeng, Thai Dam and Phu Thai mainly produce weft brocade using raw silk, cotton yarn and natural dyes, sometimes with the addition of mat-mii techniques. Large diamond patterns are common. In Central Laos, typical weavings include Indigo- dyed cotton mat-mii and minimal weft brocade jok and khit), along with techniques borrowed from all over the country (brought by migrants to Vientiane many of whom fled war zones). Gold and silver brocade is typical of traditional Luang Prabang patterns, along with intricate patterns (lai and imported Thai Lu designs). Northerners generally use frame looms; the waist, body and thin sin (bottom border) of a phaa nung are often sewn together from separately woven pieces.
In addition to the phaa nung or phaa sin (end cloth, or skirt), other apparel woven in traditional styles include the phaa biang, a shawl or shoulder sash for women, and the phaa set, a shoulder sash for men. These aren’t usually worn in everyday life but are important accessories for festival occasions and health ceremonies. Certain no clothing textiles are also crafted for ceremonial use, such as the thong – long, narrow, vertical prayer flags made of cloth Interwoven with short lengths of bamboo and sometimes weighted with bead work. These are commonly hung from the ceiling of temple ordination halls) by the Thai Lu and Thai Yuan. These same ethnic groups sometimes wrap palm-leaf Buddhist manuscripts in bamboo  stiffened textiles. 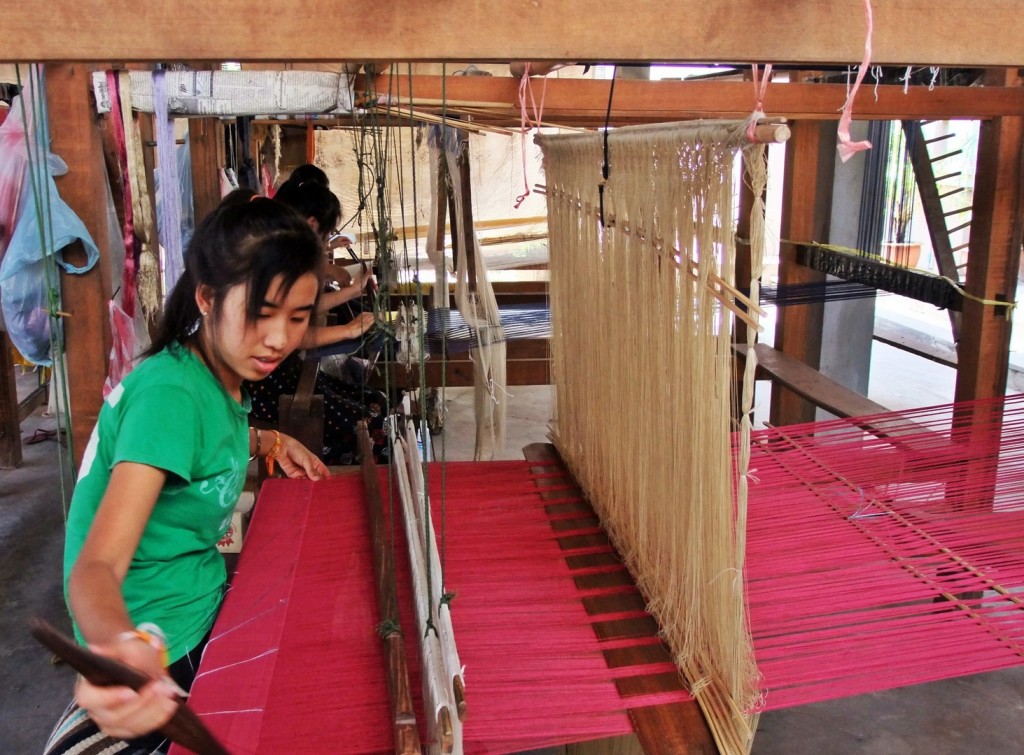 One of the common myths about Lao weaving is that synthetically dyed fabrics can’t be more than 30 years old (or 40 or 50, depending on who you’re talking to). Synthetic dyes were in fact introduced to Lao and Thai weavers by the industrialized Western world in the late 19th century; commercial Chinese dyes were known even before that. Today the only natural dye in consistent, widespread use in Laos is indigo.
Along with the rebirth of Lao weaving, however, has come a renewed interest in natural dyes, which typically create softer, but richer, colors than do their commercial counterparts. Natural sources for Lao dyes include ebony (both seeds and wood), tamarind (seeds and wood), red lacquer extracted from the tree-boring insect, turmeric (from a root) and indigo. Among tribal Thai weavers, indigo recipes are often the most closely guarded dye secrets. To make indigo dye, a weaver soaks the Indigo era tonsorial plant in water for several days, and then adds quicklime to activate the co lour. Once the dye is active, the weaver works it into a thick paste (which can be thinned later for dyeing) along with an idiosyncratic mix of ingredients (such as lime peels, tamarind, salt) to obtain the correct pH balance, texture and hue.
The basic palette of five natural colors black, orange, red, yellow and blue can be combined to create an endless variety of other coolers. Other unblended, but more subtle, hues include khaki (from the bark of the Indian trumpet tree), pink and gold (jack-fruit and breadfruit woods). With all these choices available, it’s nonsense to say that one hue or another is a ‘new’ co lour that can only be created synthetically. Brighter coolers, however, tend to be synthetic.