A great introduction to a beguiling city, this day tour takes in the major sights and most- visited areas of Vietnam’s capital. While Hanoi’s traffic may at first seem like an exercise in anarchy, it’s invariably slow-moving and light compared to Ho Chi Minh City, making for relatively enjoyable city cycling. 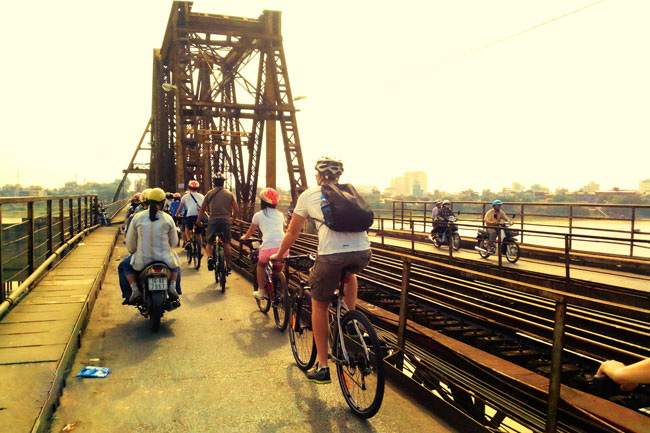 All the attractions highlighted on this ride are listed under Things to See & Do in the map key, except markets with food stalls, which are under Places to Eat.

PLANNING
When to Ride
This ride can be done at any time of year, although pleasantly warm and relatively dry October and November are probably the pick.
The Ho Chi Minh Mausoleum closes afternoons, all day Monday and Friday and for three months a year (usually Sept-early Dee), when Ho Chi Minh’s embalmed corpse goes to Russia for maintenance; the Army Museum is closed Monday; the Temple of Literature is closed Monday and April to October; and most attractions shut for lunch.

THE RIDE
The neo-Gothic facade of St Joseph’s Cathedral (inaugurated in 1886), Pho Nha Chung, marks the start and end of this attraction-rich spin. The cathedral is noteworthy for its square towers, elaborate altar and stained- glass windows. The main gate is open daily from 5 to 7 am and 5 to 7 pm, when masses are held. At other times, enter via the com- pound of the Diocese of Hanoi, a block away at 40 P Nha Chung. Ring the bell at the side door and the priest will let you in. The area around St Joseph’s is also worth exploring. It has recently developed into a fashionable strip of restaurants, galleries and outiques. 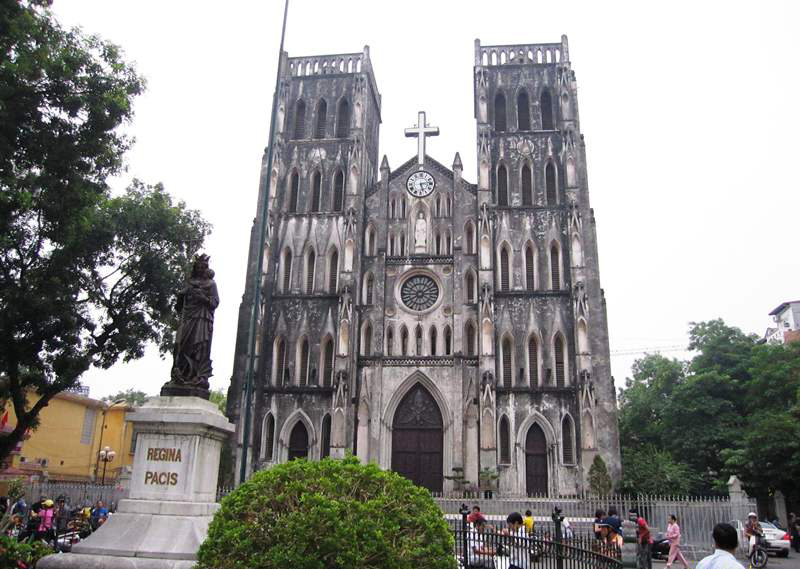 Heading south out of the Old Quarter the streets take on a far more orderly grid pattern. The section of Pho Hai Ba Trung running west to the Hanoi Towers is wall-to-wall with shops crammed with all manner of electrical goods. The Hanoi Towers building, one of the city’s tallest, contains a mix of office space and up market apartments favored by the city’s well-heeled expats. It also has a ritzy shopping arcade with a good supermarket. The Red Onion Bistro is up- stairs. Of greatest interest is the infamous Hoa Lo Prison.
The Friendship Cultural Hall is just before the left into D Le Duan (1.6km) and opposite the main Hanoi train station. South of the station, D Le Duan is bordered by a string of army surplus stores. This is a good spot to pick up a mui coi, the dark- green pith helmet worn by Viet Cong (VC) fighters and favored today by Hanoi cyclo drivers and souvenir-hungry tourists alike.

A left turn by the new Hotel Nikko (2.3km) leads into Pho Tran Nhan Tong, the south side of which is bordered by Lenin Park (Cong Vien Le in). It is a very nice place to relax or, if you’re early enough, to join hundreds of Hanoians for morning calisthenics. At the north-west comer of the park sits the voluminous tent housing Hanoi’s Central Circus one Russian entertainment tradition which has survived and thrived in Vietnam. Many of the older performers were trained in Eastern Europe, though today’s recruits learn from their Vietnamese elders Nightly perform ances (except Monday) are held at 8pm.
Just east of the park the ride crosses Pho Ba Trieu (3.1 km), where many of Hanoi’s bike shops together. It can be good fun to look over the rows of locally produced machines. Be prepared to answer all sorts of questions as the shop owners cast a curious eye over your piece of Western exotica.

Heading north on Pho Hue (3.4km) towards Hoan Kiem Lake, the Hom Market is a good place to gather goodies for lunch. At the south-east corner of the lake a right turn takes you past Hanoi’s best bookshops on PhoTrang Tien. Up ahead looms the magnificent and recently renovated Hanoi Opera House 4.9km built in 1911. It was from a balcony of this building on 16 August 1945 that a Viet Minh-run committee announced it had taken over the city. The theatre’s Vietnamese name, Nha Hat Lon, appropriately translates to ‘House Sing Big’. Periodic evening performances are held; check The Guide or Time Out. 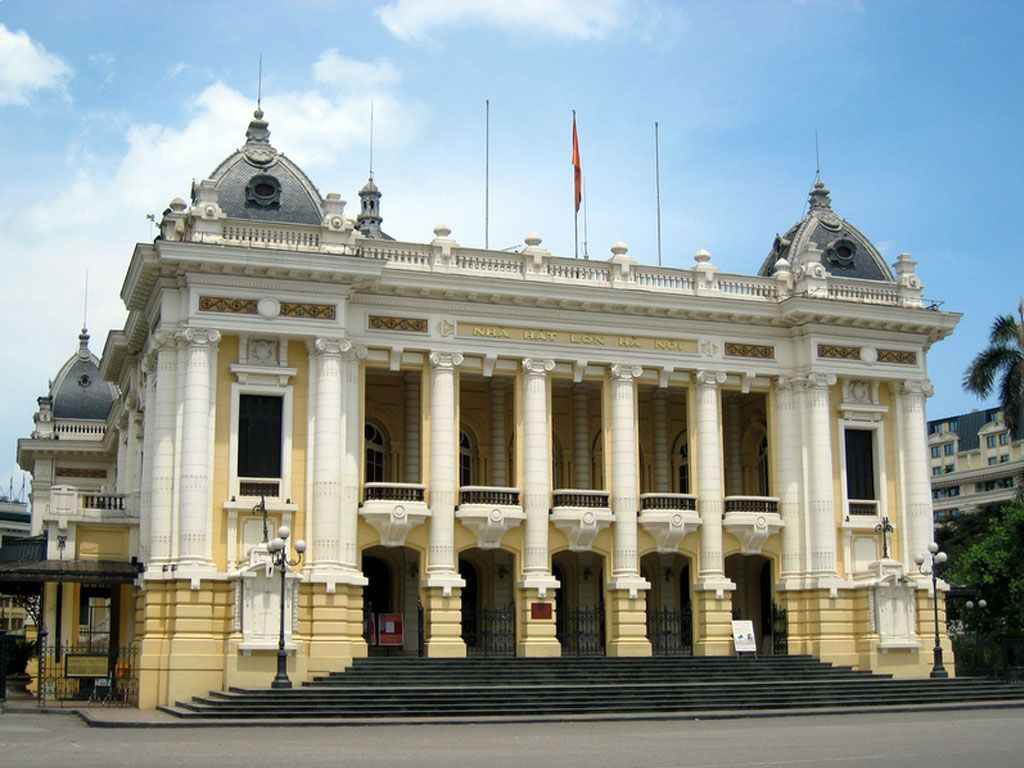 From one grand building to another, the route continues north on Pho Ly Thai To, to the Sofitel Metropole Hotel, the preferred place for visiting VIPs to rest their heads. Visiting heads of state and high officials get to stay over the road at the former residence of the governor of Tonkin, also immaculately restored, and now used as the official State Guest House. It’s next to Indira Ghandi Park, renamed in 1984 in honor of the assassinated Indian prime minister, a long-time supporter of Vietnam.
From the eastern shore of Hoan Kiem Lake, see the Tortoise Pagoda at 5.5km. Amid the Old Quarter’s jumble of streets, pass the Municipal Water Puppet Theatre and Pho Hang Dau’s wall-to-wall shoe shops. At 6.1 km is the Flower Market, with fresh fruit, clothing and, of course, colorful blooms.
Heading west on P Hang Bac (6.2km), stores ringing with the sound of craftsmen chiseling gravestones soon yield to gold-laden jewellery merchants’ shops, the Internet and travel cafes of Hanoi’s backpacker strip and the clothing outlets of Pho Hang Ngang.
Surrounded by the tinned goods and grocery shops of P Hang Buom is the Bach Ma Temple (White Horse Temple; 6.8krn), an impressive 9th-century Chinese-style temple. According to legend, in the 11th century King Ly used the pagoda to pray for assistance in building the city walls, which persistently collapsed no matter how many times he rebuilt them. His prayers were finally answered when a white horse appeared out of the temple and, leaving a trail of footprints, guided him to where he could safely build the walls.

Close by is the Old East Gate (Cua O Quan Chuong; 7.2krn); dating back to 1749 it’s the sole remaining approach into the original Hanoi Citadel. The brick structure underwent repairs in the early 19th century, though the original watchtower still sits atop the relic.
On the right side of busy D Xuan is the mammoth three storey, Dong Xuan Market. The market burned down in 1994, killing five people (who had entered the building after the fire started to either rescue goods or steal them). The rebuilt market has hundreds of stalls employing around 3000 people.
Pho Hang Dau marks the northern extremity of the Old Quarter and the Hoan Kiem disenter the Ba Dinh district and head to West Lake (9.6krn). Its I3krn circumference was once ringed by magnificent palaces and pavilions; destroyed long ago during feudal wars they have been replaced by luxurious villas and hotels on the north side, and a string of seafood restaurants to the south. 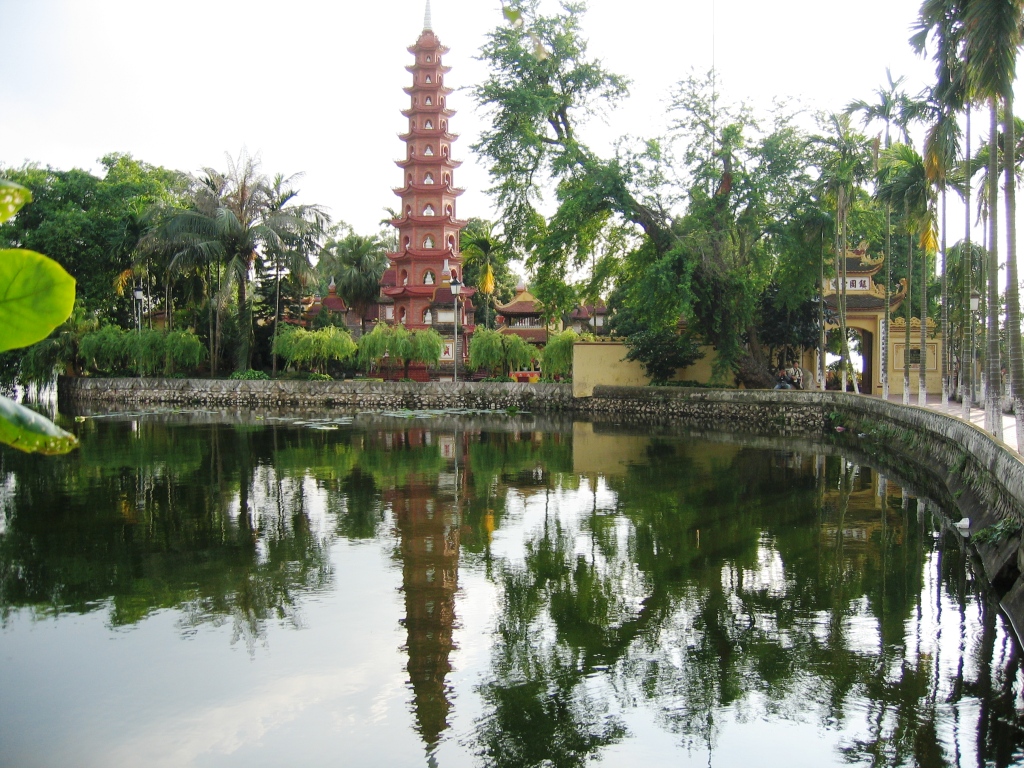 The ride heads south on Thanh Nien steet on a narrow strip of land separating West Lake from smaller True Bach Lake, its calm waters dotted with colorful pedal boats. Tran Ouoc Pagoda (the ‘ atonal Defence’ pagoda), originally built in the 6th century and considered to be Vietnam’s oldest, can be visited on West Lake’s eastern shore.
Just south of the lakes, the wide expanses of Ba Dinh Square beckon. At the north end is the Presidential Palace (11km) and, behind it, Hanoi’s Botanical Gardens. Heading south through the square, the scene of many an official parade and ceremony, serious young soldiers stand motionless in crisp uniforms outside the nation’s most important monument, Ho Chi Minh’s Mausoleum (11.4km). The Ho Chi Minh Museum, his stilt house and the One Pillar Pagoda are nearby.

Bordering Pho Nguyen Thai Hoc, the Temple of Literature (12.3km), established in 1076 as Vietnam’s first university, is a rare example of well-preserved, traditional Vietnamese architecture. Major renovations were carried out on the temple in 1920 and 1956; enter from P Quoc Tu Giam a block south.
Turning onto Pho Dien Bien Phu, the route rounds the small, grassy triangle known as Chi Lang Park. Originally a swimming hole used by soldiers from the nearby Hanoi Citadel, today it hosts an imposing 5m-high Lenin Statue. Across the way is one of the city’s most popular and informative museums, the Army Museum, within the grounds of which stands the Flag Tower.
Over the rail line, Pho Hang Bong leads back to the Old Quarter, passing a string of shops crammed with spools of copper wire. A final turn into P Ly Quoc Su brings the familiar facade of St Joseph’s Cathedral into view.

Highlights in Can Tho Province, Vietnam