The same size as Singapore, the island of Phu Quoc lies off the west coast of Vietnam’s Mekong Delta. At times claimed by Cambodia and Thailand, the island is now like an armed fortress of the Vietnamese navy, and 80% of the island is protected as the Phu Quoc National Forest. 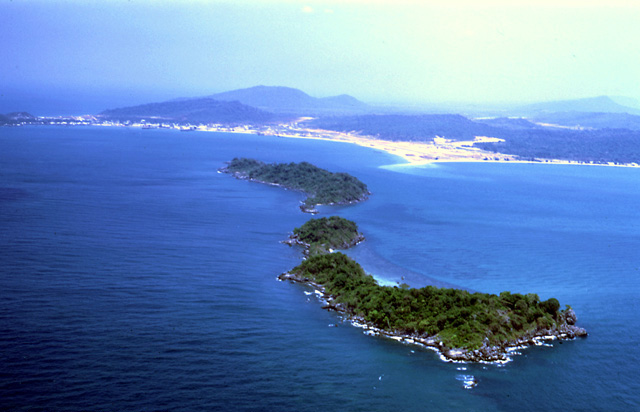 Exploring the dirt-track by ways of the forested isle, among picturesque pepper plantations and long stretches of deserted beach, is a hoot. A visit to Phu Quoc is a good, affordable opportunity to relax, spend time on the beach, and snorkel or scuba-dive. Get there soon and someday you’ll be able to say, “I went there before it was touristy. ”

The pepper industry on Phu Quoc has just gotten back up to speed after a long gap since the days when every French table had a shaker of Phu Quoc’s finest. Phu Quoc is most famous for production of nuoc mam, the noxious fish sauce that is part of any meal in Vietnam. U. S. pilots flying over the island during the Vietnam War joked that the fumes from nuoc mam factories of Phu Quoc were enough to blow out the torch on a jet engine. Find a guide on the island, and you’ll be able to get up-close and personal with the aromatic production of Vietnam’s most versatile condiment.
The Six Senses group, popular developers of Evason Ana Mandara Resort and Evason Hideaway Ana Mandara in Nha Trang, plans on having a large resort here in the near future, and developers are lined up, wringing their hands and ready to build. Thanks to red tape, this quiet island is still a dirt-track backwater, with bungalows and little in the way of infrastructure. But plans are underway for expanding the airport and including international flights.
Weather on the island, thanks to cool ocean breezes, is always temperate and thus a great escape from sultry Saigon. The coolest time to go to Phu Quoc is from December to February. Note: The island is quite rainy and exposed to monsoon storms, from May to November.

Orientation
The island is over 50km (31 miles) in length and just 20km (12 miles) wide at its center. The Phu Quoc Airport is near Duong Dong, the island’s largest town, a fishing port on the western shore. From Duong Dong, Tran Hung Dao Street connects with Long Beach, where you’ll find most of the island resorts. Ong Lang Beach is about 6km (3,75 miles) north of Duong Dong. At the northernmost point of the island, you’re just 15km (9,75 miles) from Cambodian waters. 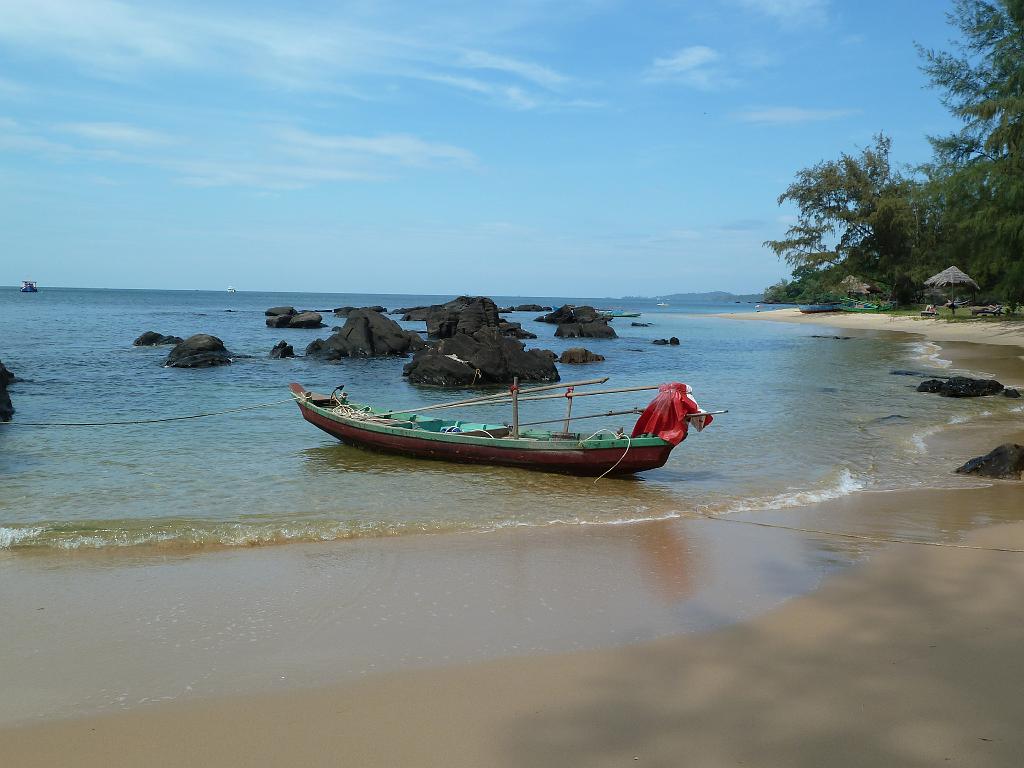 Exploring The Island
Phu Quoc’s quiet dirt roads are a great place to get your motor runnin’ and ying ying ying all over the island.
Heading north along the west coast of the island, roads of thick red dust connect vilages set along salty inlets crowded with small fishing boats. You’ll first come to the beach area of Ong Lang, which hosts a small clutch of resorts and services along a quiet stretch of sand; a small turnoff from the main road takes you there. Continuing north, follow long stretches of open beach lined with fish and squid out to dry on large bamboo mats. There are lots of opportunities along the way for complete seclusion. The coastal road reaches Ganh Dau, a small town of busy nuoc mam (fish sauce) factories. Note: Don’t buy bottles of nuoc mam as souvenirs; the pungent sauce is banned from Vietnam Airlines and virtually all flights out of the country! Farther out on the peninsula area, you’ll find a few local hangout spots with hammocks under shade trees by the beach.

From Ganh Dau, you can turn inland and make a long clockwise loop. It’s 13km (8 miles) along jungle road to the town of Rach Vieu, and another 6km (3% miles) east brings you to the Suai Cai Crossroad. From there you can go 13km (8 miles) to the beaches of Bai Thom (a military base on the far north end of the island), or even gel motocross for the long trip down the treacherous trails on the island’s east side; most take the short loop inland, some 16km (10 miles) heading back to Duong Dong town. 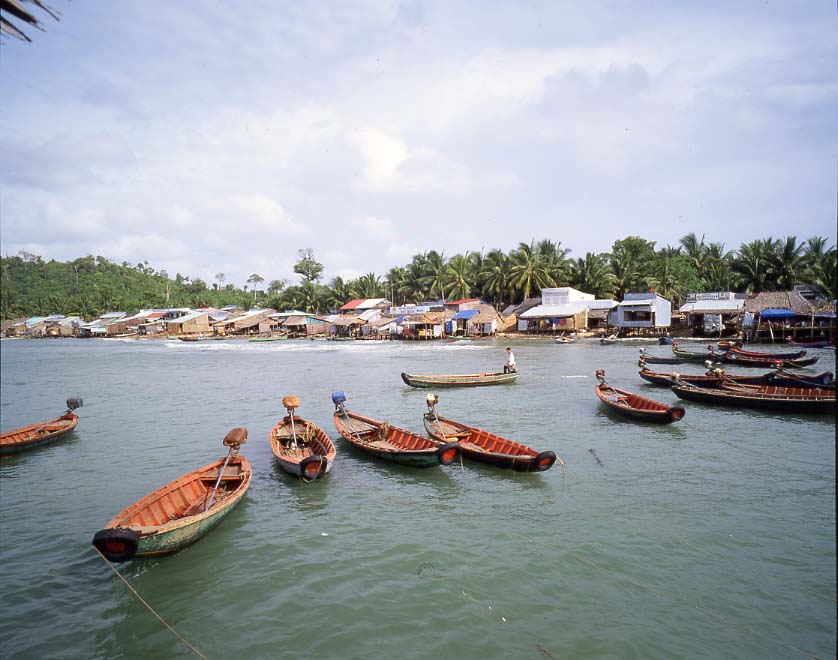 Going south from central Duong Dong town, toward the An Thoi Port area on the far southern tip of the island, are a few attractions. The west coast road is unpaved and bumpy, but far more interesting than the paved central road (though that’s a good way to head back to your hotel).
Along the coast, Phu Quoc Pearl Farm (Duong To Village, 10km/6,25 miles south on the western coastal road, Tran Hung Dao) is a relaxed roadside stop overlooking a long stretch of open beach along the dusty coastal road, as well as a small museum with good explanations about the complex process of pearl farming and a very high-end boutique with some very unique colored and clear pearls in fine gold and silver settings. Stop here if you’re heading to Sao Beach (Bai Sao) in the far south.

Nha Tu Phu Quoc is the old jail where the French housed Vietnamese dissidents. The sight is just an enclosed field with old fallen-down sheet metal Quonset huts, but there is a little adjoining museum with some photos and information (daily 7-11: 30am and 1: 30-4pm).
The town of An Thoi in the far south is little more than a turnaround point, a busy little port worth a wander, though.
Saigon Phu Quoc Resort also runs evening squid fishing trips. You’re sure to see the lights of squid fishermen far out on the horizon each evening; it looks like a small city out there at certain times of year. The tour leaves at 4: 30pm and you motor out to join the large fleet. Fishermen catch squid by attracting them with a light and hooking them near the surface, a fun and playful jigging technique. Kids love it. 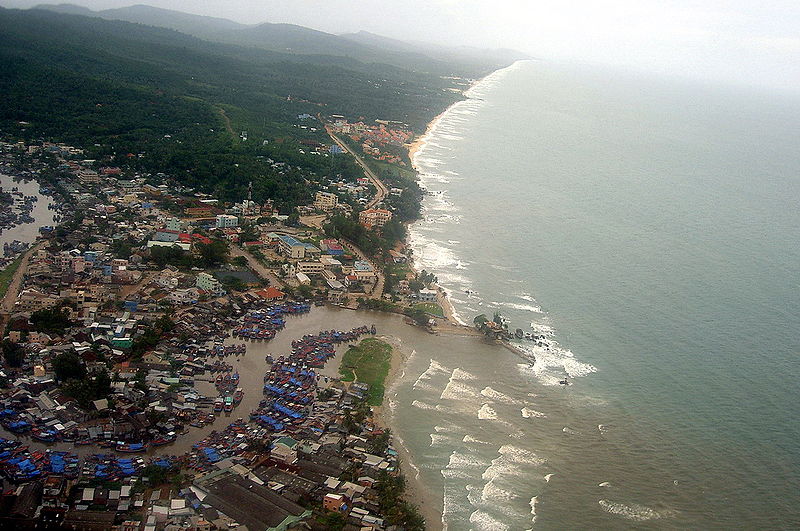 Not far from the ferry terminal of An Thoi, some 25km (16 miles) south of central Dong Duong town, lies beautiful Khem Beach, a long white-sand stretch lined with palms and with some actual pounding surf. On clear days, it’s great for snorkeling. The beach is still free of the developers’ shovels, which means no resorts (yet). You’ll just spot a few lazy beachside sugar shacks with low tables under umbrellas and lots of hammocks in the shade where you can sip a cool drink, order lunch, and watch the day go by. It’s a popular beach for domestic tourists, though, so it gets pretty crowded on the weekends.