The Lay Of The Land

About the size of Missouri, some 181, 035 sq. km (69, 898 sq. miles), Cambodia’s 20 provinces are bordered by Laos in the north, Vietnam in the east, Thailand to the west, and the Gulf of Thailand to the south. The marine port in Cambodia, Sihanoukville, is connected to the capital and largest city, Phnom Penh, via a major U. S. built highway.

The mighty Mekong enters from Laos to the north and nearly bisects the country. The river divides into two main tributaries at Phnom Penh before it traces a route to the delta in Vietnam, and most areas of population density lie along the river valleys and fertile plains of this great river and its tributaries. Near Siem Reap, the Tonle Sap (Great Like) is the largest lake in Southeast Asia. In the monsoon summer months, when the Mekong is swollen from the snows of Tibet, the river becomes choked with silt and backs up on the Mekong Delta. The result is an anomaly: The Tonle Sap River relieves the pressure by changing the direction of its flow and draining the Mekong Delta hundreds of miles in the opposite direction and into the Tonle Sap Lake.

The northeast of the country, Rattanakiri Province, and areas bordering Vietnam are quite mountainous and rugged, as are the Thai border areas defined by the Dangrek Mountains in the northwest and the Cardamom Mountains in the southwest. These jungle form regions are a rich source for timber in the region, and steps toward preservation conic slow.

A Look At The Past

Some 2 millennia ago, a powerful people known as the Khmer ruled over much of present day Southeast Asia, including parts of what is now eastern Thailand, southern Vietnam, and Laos. Theirs was a kingdom that seems to have been created in a dream: wondrous temples, magnificent cities rising from steamy jungles, and glorious gods.

The story of Khmer civilization is one of a slow decline from the zenith of the powerful Angkor Civilization of the 11th century. War and years of alternating occupation by neighboring Thailand to the west and Vietnam to the east, later by the French and Japanese, had Cambodia bouncing like a strategic Ping-Pong ball, and the Khmer kingdom’s size was chiseled away considerably. Remaining is what we know today as Cambodia, a tiny land half the size of Germany.

The name Cambodia is an Anglicized version of the French Cambodge, derived from the tribe of northern India from which the Khmer are said to descend. Citizens are alternately referred to as Khmer or Cambodian; the language is Khmer. Whatever the origins, the name Cambodia hardly evokes thoughts of ancient glory: Especially in the West, Cambodia suggests instead a history of oppression, civil war, genocide, drug running, and coup d’état. Constant political turbulence, armed citizenry, bandits, and war fallout, such as unexploded mines and bombs, have given the country a reputation as one of the world’s most dangerous places to travel rather than a repository of man-made and natural wonders. It’s important to have perspective on the country’s troubled history in order to understand the present. Only then can we appreciate the present civil order and the fact that citizens have been or are being disarmed, and that Cambodia is making the slow push into this new century.

A Turbulent Political Past

Cambodia is populated by people of the Mon-Khmer ethnic group, who probably migrated from the north as far back as 1000 B. C. It was part of the kingdom of Funan, a Southeast Asian empire that also extended into Laos and Vietnam, to the 6th century, when it was briefly absorbed into a rebel nation called Chenla. It then evolved into its glorious Angkor period in the 8th century, from which sprung many of Cambodia’s treasures, most notably the lost city of Angkor.

Sihanouk meets the Australian prime minister Gough Whitlam in Beijing as the Vietnam War neared its end in November 1973.

By the late 12th century, however, the Angkor kingdom began a decline, marked by internal rebellions. Angkor was lost to the Kingdom of Siam in 1431, and Vietnam jousted with Siam and also had a hand in controlling the kingdom, to some degree, beginning in the early 17th century. The French took over completely in 1863, followed by the Japanese and then the French again. Cambodia finally regained independence in 1953 under the leadership of Prince Norodom Sihanouk.

Vietnamese Communist outposts in the country, however, drew Cambodia into the Vietnam War. It was heavily bombed by U. S. forces in the late 1960s. A U. S. – backed military coup followed in 1970, but in 1975 the infamous Khmer Rouge, led by the tyrannical Pol Pot, took over Cambodia, renamed it Democratic Kampuchea, and established a totalitarian regime in the name of communism. Opposition even imaginary opposition was brutally crushed, resulting in the death of over two million Cambodians. The civil and Vietnam wars decimated Cambodian infrastructure. It became, and still is, one of the world’s poorest nations, with a mainly agrarian economy and a literacy rate of about 35%.

In response to Khmer Rouge infractions in its country, Vietnam invaded Cambodia in 1978 and occupied it until 1989, installing a puppet regime led by Hun Sen as prime minister. When Vietnam departed, the United Nations stepped in and engineered a fragile coalition government between the Sihanouk and Hun Sen factions. There was never full agreement, however, and Hun Sen took over in a violent 1997 coup. The Khmer Rouge subsequently waned in power, and Pol Pot died in 1998.

In November 1998, a new coalition government was formed between the two leading parties, leading to relative political peace. Cambodia is now leaning toward a war-crimes tribunal for Khmer Rouge perpetrators, but it still has not decided how to confront its vicious and bloody past and move forward.

July 2003 elections went off without incident, but it took nearly a year for negotiation of a government coalition. Hun Sen still reigns as prime minister. In the fall of 2004, King Norodom Sihanouk, Cambodia’s longtime standard-bearer through the many violent regime changes and trying times, abdicated, selecting his son Norodom Sihamoni, a retired ballet dancer, to take up the symbolic post of king.

Cambodia’s economy is experiencing a 5% annual growth rate, mostly spurned by tourism, but the scene in rural Cambodia is bleak. Basic medical services are nonexistent; education and job training are out of reach for rural peasantry; and international monitors and aid organizations look to this young population (some 60% under the age of 20), the survivors and the next generation after genocide, to foster peace and productivity. The forecast is not good. The proliferation of new AIDS cases in Cambodia, and the inability to treat patients, is a major concern. Rural travel entails following safety precautions to the letter (see “Safety, ” below) and staying abreast of the political situation- instability being the hallmark—but know that the Cambodia of today is a much safer and saner land than only a few years ago. And tourist dollars are a big help. 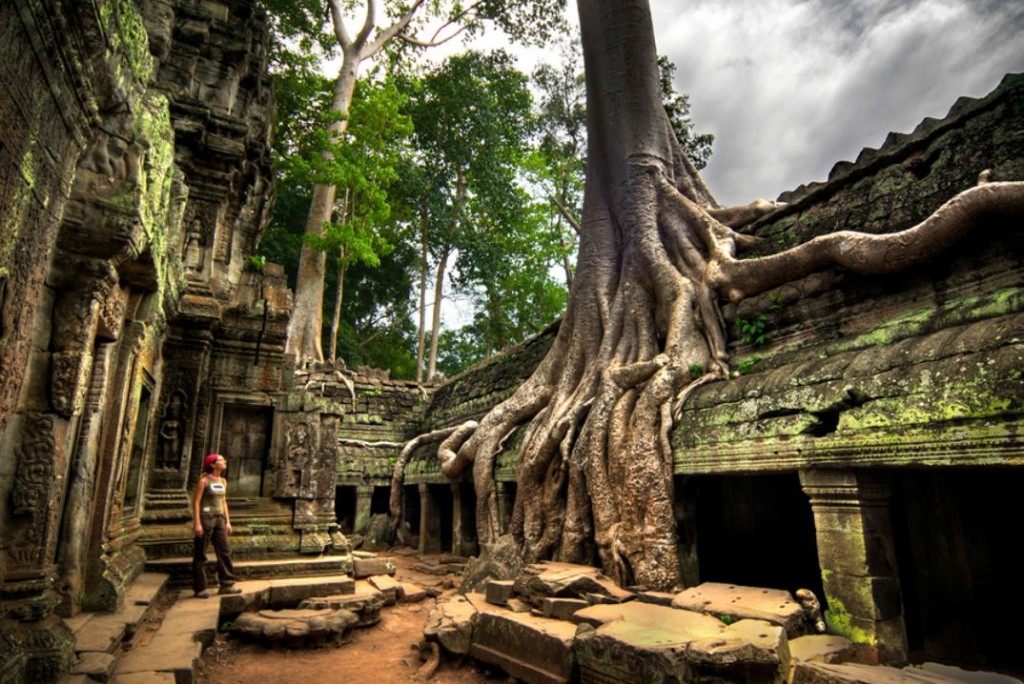 Ninety percent of Cambodia’s 11 million people are ethnic Khmer, the remainder a mix of ethnic Vietnamese, Chinese, hill tribes, and a small pocket of Cham Muslims. Cambodia’s history is a road map of incursions and invasion. Cambodia is a geographic and cultural crossroads of the two powers, India and China, that shaped Southeast Asia and, more than any country in the region, reflects the French term Indochina. Khmer culture, like nearby Laos, is defined by Theravada Buddhism. 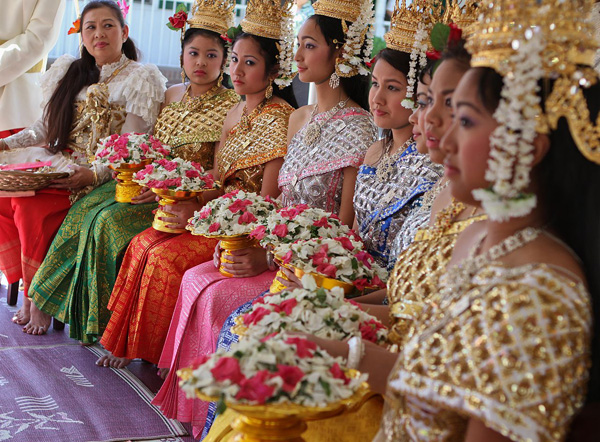 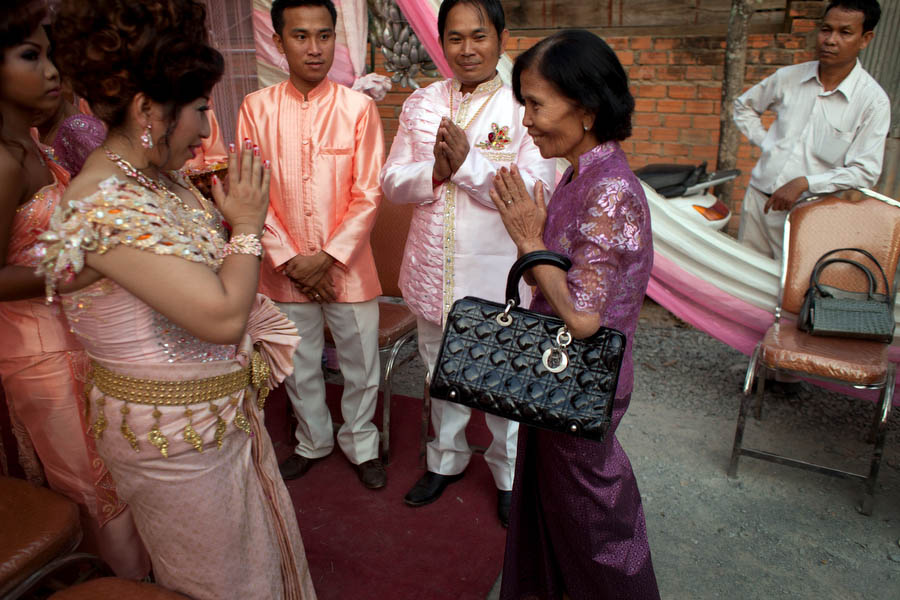 Sampeah is a Cambodian greeting or a way of showing respect

Traditions and practices in Cambodia, like neighboring Thailand and Laos, are closely tied with Theravada Buddhism. Modest dress is expected of all visitors, and bare midriffs or short shorts are an offense to many and will cause a stir. Men and women should go easy on public displays of affection. As in all Buddhist countries, it is important to respect the space around a Buddhist monk; women especially should avoid touching and even speaking to the men in orange robes outside the temple.

In personal interaction, keep it light and friendly, especially when bargaining or handling any business affairs. If Khmer people are confused, misunderstand, or disagree, they do what many Westerners find inconceivable: smile, nod, and agree while whole in the knowledge that they will do something different. This is difficult to understand, but try to remember that if you’re angry and lots of people around you are smiling, you’re unlikely to have achieved your desired aim (in short, you’re doomed). Direct discourse is certainly not standard procedure here, and many Western visitors can feel cheated by that misunderstanding. Be clear in what you expect from someone whether a guide, a motorbike driver, or a business associate and get firm affirmation of that fact. Listen closely to what comes after the but in “Yes, but… ”

On the line of cultural “no-nos,” remember that the feet are considered dirty and that the head is sacred and pure. This means that even pointing the feet in the direction of another or stepping over someone, thus exposing the souls of the feet is impolite. Touching someone’s head, even tussling a child’s hair, should be avoided.

Hospitality has its own elaborate rules, and, like in any culture, it is important to accept when possible, or comfortable, and say thank you, “Awk koun.” 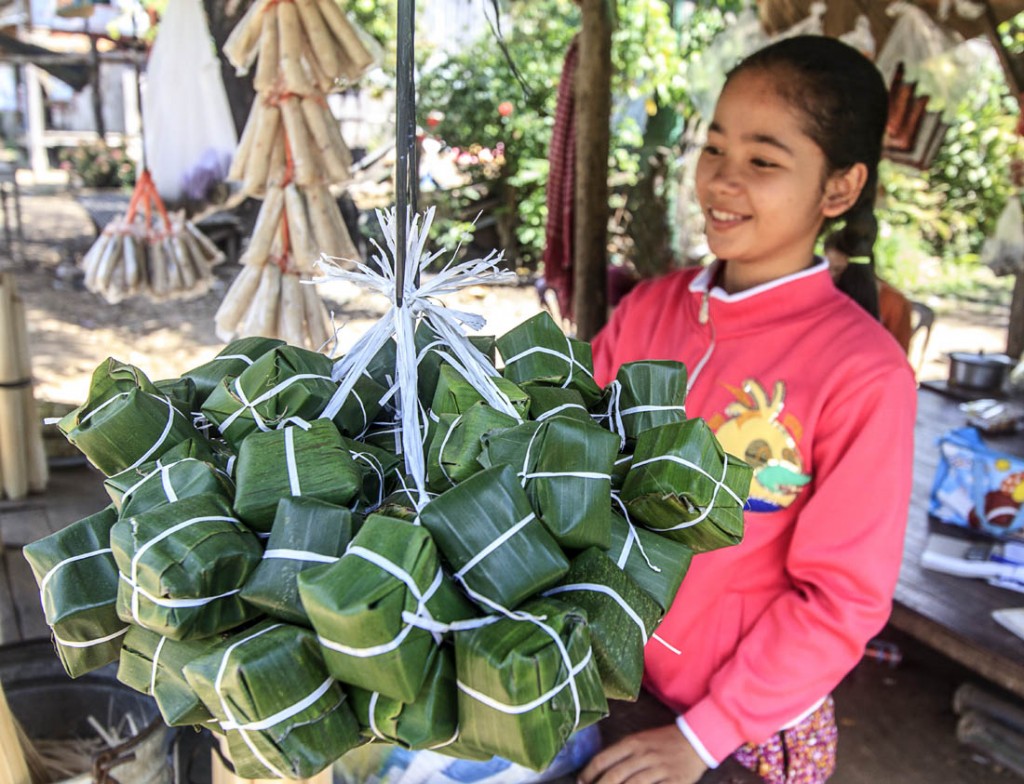 A crossroads of culture, Cambodia is also a crossroads of cuisine, with a mixture of Thai, Laotian, and Vietnamese, as well as newcomers Chinese and French. Just like its neighbors, rice is the staple of the Khmer diet, but not even the devastating cultural purge of Pol Pot, in which all foreign food and customs were banned, could remove the French- infused tradition of eating good baguettes and specialty breads with good milk coffee at outdoor cafes (you’ll even see folks still playing boulle in provincial towns). Don’t pass up a snack at one of the many glass-sided bread carts that roam city streets, particularly in Phnom Penh; mostly sweet breads, but also good baguettes, bought at these trucks are good to have on all-day bus rides and long 1 -day trips. You can find lots of stands selling Vietnamese baguettes stuffed with pate as well.

Dining Khmer style is a long, jocular affair, with cover-the-table spreads of various dishes shared by many over long hours of drinking and chat. Fish is the most prized entree, and Khmer amok, a dish of fish steamed in bamboo leaf with coconut milk and curry, is not to be missed. Fried veg and meat dishes abound, some with fiery spices and chili, similar to Thai fare.

Dessert is good sweet cakes and breads or treats made of glutinous rice, or sticky rice, in coconut milk. The list of good local fruit is long, topped by mangos (when in season), papaya, mangosteens (mankut), durian, rambutan, jackfruit, and lots of citrus treats, and all kinds of spiky, horned things you’re sure to see at the market. Just ask how much and ask the vendor to cut it open for you.

The language of Cambodia is called Khmer, a term that refers to the ethnic majority of the country but is used to describe all things Cambodian: Khmer people (the Khmer), Khmer food, culture, and so on. Unlike in neighboring Thailand and Laos, the Khmer language is not tonal and is thus more merciful to the casual learner. Basic pronunciation is still frustrating and difficult, though. Khmer script is based on a south Indian model and is quite complex.

Khmer has many loan words from French, Chinese, and now English, especially technical term. Older Khmers still speak French, and young people are keen to learn and practice English. In the major tour centers, speaking slowly and clearly in Basic English phrases will do the trick, but a few choice phrases in Khmer will get you far.