Pa Khoang Lake and Muong Phang Forest
A worthwhile half-day or full-day excursion from Dien Bien Phu takes travellers north east of the city to the beautiful Pa Khoang Lake and onwards to Muong Phang Forest, a popular local beauty spot and more importantly the site of General Vo Nguyen Giap’s command headquarters during the Dien Bien Phu campaign.
Those who did not visit this area on the way into Dien Bien Phu from Tuan Giao should travel around 15 kilometres back along National Road 279 in the direction of Tuan Giao before forking right up the hill in the direction of Muong Phang. Travelling through the Kho Mu villages of Pu Sung and Vang, travellers will arrive some 4 kilometres later on the northern banks of Lake Pa Khoang. 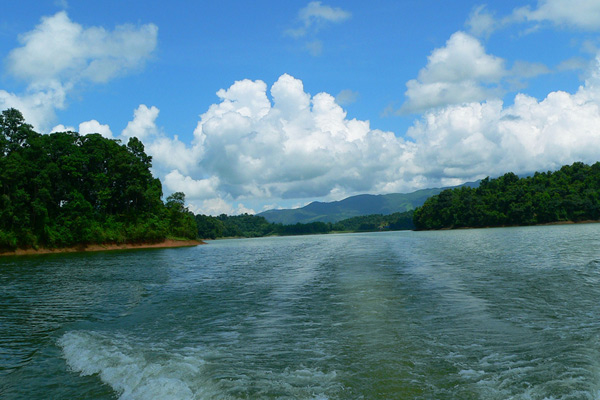 Pa Khoang Lake
Location: Xa Muong Phang, Huyen Dien Bien, Tinh Dien Bien
Located around 20 kilometres north east of Dien Bien Phu at a height of 960 metres above sea level, the 2, 400-hectare Pa Khoang Lake was constructed in the 1990s as a reservoir to hold around 45 million cubic metres of water which, feed the region’s Thac Bay hydro-electric power station.
There are two guest houses on the northern shore of the lake, but since the first one (Nha nghi Truc An) is not currently open to foreign visitors, travellers should make for the second one (Nha nghi Ho Pa Khoang), where it is possible to hire a boat or even arrange overnight accommodation.

Headquarters of the Dien Bien Phu Campaign
Location: Ban Pa Keo, Xa Muong Phang, Huyen
Dien Bien, Tinh Dien Bien
Opening hours: 7am-11am, 1. 30pm-5pm daily
To get to this important historic site, situated 15 kilometres from Pa Khoang Lake in the Muong Phang Forest, travellers should continue along the Muong Phang road past a large new monument to the Martyrs of the Dien Bien Phu Campaign before forking left to Ban Pa Keo. Situated a brisk 800- metre walk from the entrance, the Headquarters of the Dien Bien Phu Campaign from 30 January- 15 May 1954 were guarded for 50 years by a local man named Lo Van Pong before being completely restored for the 50th anniversary celebrations of the Battle of Dien Bien Phu in 2004. Here visitors may view the Living and Working Quarters of both General Vo Nguyen Giap and Chief of staff Hoang Van Thai, the office assigned to Chinese advisers, a meeting room, a wireless room and a series of connecting tunnels. 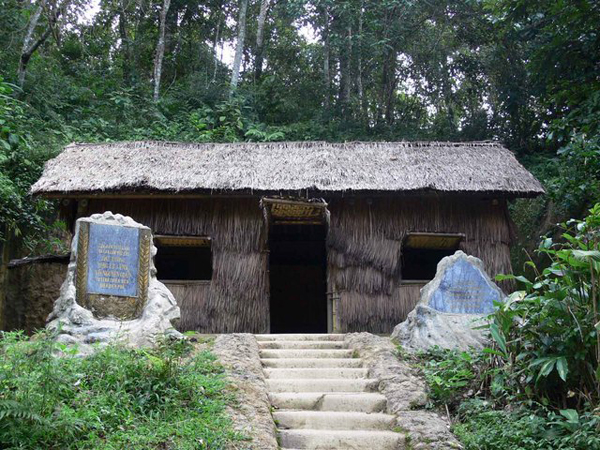 After visiting Pa Khoang Lake and the Headquarters of General Vo Nguyen Giap, travellers may either return the way they came to National Road 279 and enter Dien Bien Phu by the main road from the north, or take a short cut across the hills through the beautiful Ta Nen valley, surrounded on both sides by White H’mong and Kho Mu villages, re-entering Dien Bien Phu city from the east.

Citadel of the Thirty Thousand, Ban Phu Citadel and U Va Hot Spring
Heading south of the city along National Road 279 in the direction of the Tay Trang-Sop Hun International Border Gate, travellers may visit the remains of two historic citadels – the 15th-century Citadel of the Thirty Thousand at Ban Poom Lat and the 18th- century Ban Phu Citadel at Ban Phu. A trip to these citadels may be combined with a relaxing visit to Dien Bien Phu’s best-known hot spring resort at U Va, west of Ban Phu.

Travelling south from Dien Bien Phu the road passes the Noong Nhai Memorial, which commemorates an atrocity committed during the 1954 campaign: 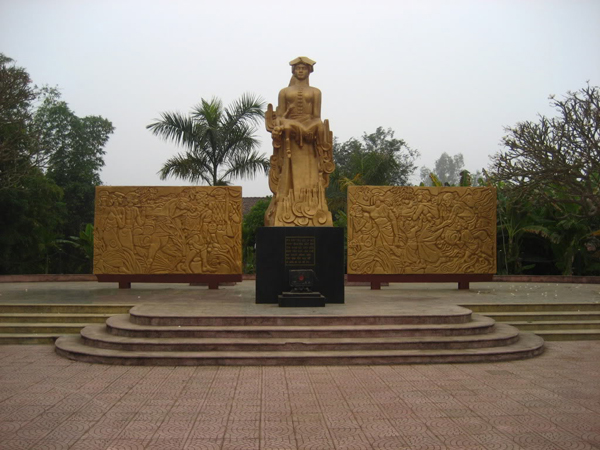 Located 4. 5 kilometres south of Dien Bien Phu on National Road 279 in the direction of the Laos border gate, this memorial remembers the hundreds of ethnic minority prisoners in the French prisoner-of-war camp which once occupied this site, who were killed when the French airforce bombed the area on 10 April 1954.
Passing through Ban Phu, 9 kilometres south of the city, travelers will reach Poom Lat village around 2 kilometers later. The area now occupied by this village was once at the centre of a massive citadel, constructed in the late 15th century by the Lu lords of Muong Thanh:

The ‘Citadel of the Thirty Thousand’ (Thanh Tam Van) was built at the junction of the Nam Rom and Nam Nua rivers during the late 15th century by the Lu lords of Muong Thanh, acquiring its name because, according to the Hung Hoa Ky Luoc (An Abridged History of Hung Hoa), it was capable of sheltering 30, 000 people (the name of the commune, Xam Mun, means 30, 000 in Thai) and was served by 30, 000 water-driven rice pestles. Today there is very little to be seen – no sections of the citadel have yet been restored, although sizeable sections of earth works and some remnants of brick walls may still be seen in the surrounding rice fields and in the back gardens of local houses, their location suggesting that at its height this was a massive construction which covered a large area of the valley floor – ask in the main street of Poom Lat village for directions.

After visiting the remains of the Citadel of the Thirty Thousand travellers should return north and back into Ban Phu, forking west in the town centre to reach the remnants of a later citadel, this one constructed in the 18th-century by Vietnamese peasant leader Hoang Cong Chat, together with the temple erected subsequently in his honor: 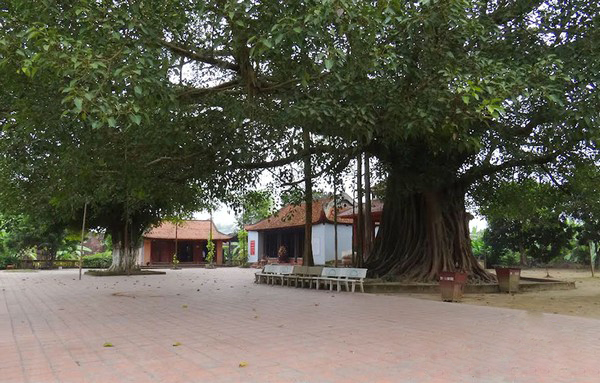 Hoang Cong Chat, real name Hoang Cong Thu, of Vu Thu, Thai Binh, led a rebellion of peasants which erupted in 1739 in Son Nam (Nam Dinh-Thai Binh, Ha Hung). From 1748 insurgent troops entered the highland region of Thanh Hoa and then advanced through the mountains and forests to Hung Hoa (Tay Bac). Here, together with Thai Generals Ngai and Khanh, he led the peasants of the ethnic minorities, uniting them to expel the Phe (Pong) invaders and liberate Muong Thanh (Dien Bien) in May 1754.
In order to establish a base for his government, Hoang Cong Chat constructed a citadel at Ban Phu between 1758 and 1762. From there the insurgents developed the 10 districts of the An Tay region and expanded their frontiers to include Hoa Binh, Ninh Binh and Thanh Hoa.

The rebellion lasted 30 years (1739-1769), affecting both lowland and upland areas alike. Hoang Cong Chat united all the peasants of the ethnic minorities, winning the love of everyone across the country, bringing the people together to expel foreign aggressors and complete the task of protecting the mountainous regions, forests and borders of the Vietnamese fatherland in the 18th century.

While nothing now remains of the fortress itself (the impressive main gate being a modern reconstruction), the temple contains a small display of historic relics excavated from the Ban Phu citadel area, including a wine cup, arrows and spear and axe heads, other artefacts relating to the life and times of Hoang Cong Chat may be seen in Dien Bien Phu’s Provincial Museum Exhibition Centre.
On the wall are a map of Hoang Cong Chat’s military campaigns and a plan of the immediate area, which
gives the following information about his citadel:

Construction of Ban Phi citadel commenced in 1758 and was completed in 1762. The citadel was 80 mau (1 mau = 3, 600 square metres) wide, the road into the citadel 4, 000 metres long and 10 metres wide and the front wall of the citadel 5 metres wide X 5 metres high. Around the citadel was planted a large forest of 30, 000 bamboo trees. Outside the bamboo forest was a moat 5-metres deep and 10 metres wide.
The citadel was divided into two areas – the inner city comprised the officers’ quarters, the outer area had a drill yard, a store house and a general army barracks.
Hoang Cong Chat had 133 ponds dug to cater for the daily drinking water and cooking needs of the insurgents, using the excess earth to fortify the walls of the citadel.
Continuing 6 kilometres west from Ban Phu Citadel through Ban Noong Luong brings travellers to the U Va hot spring resort:

Laos border gate
Situated 34 kilometres south west of Dien Bien Phu, Tay Trang-Sop Hun International Border Gate opened to foreign travellers in late 2007 and now offers Lao visas on arrival for $35, although those travelling from Laos should note that Vietnam visas are not issued here and must be arranged at the Vietnamese Embassy in Vientiane before departure.
Buses leave Dien Bien Phu for Muong Khua at 5.30am on Sundays, Mondays, Wednesdays and Fridays, while in the other direction there is a 7am departure from Muong Khua to Dien Bien Phu on Sundays, Tuesdays, Wednesdays and Fridays. 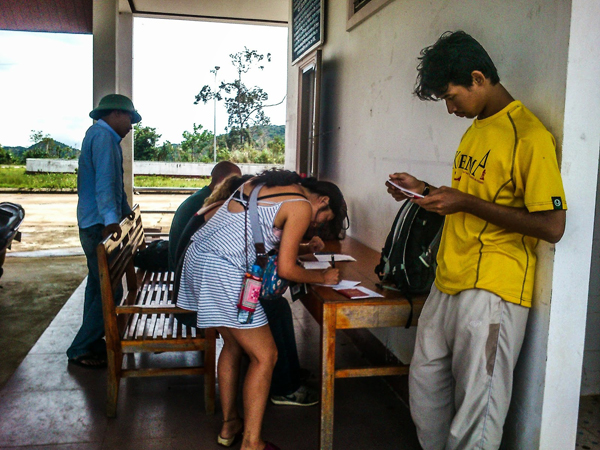