If you have time for only one attraction here, be sure to check out the huge boat building operation on Phan Chu Trinh Street. Up to 10 large oceangoing boats are in production at any given time, and visitors are free to wander around at their own peril The whole place is a great photo opportunity.

Craftsmen start with chain saws and hand planers on rough-hewn planks, light fires to heat and bend the sections that make the curved prows of the boats, and assemble the large frames under a large tin-roof ware house, a track leading from the shop to the sea. You’ll see some serious heaving and hauling by large gangs of young workers, and can get up close with the more skilled craftsmen or chat with grinning septuagenarians marking planks with neon paint. A memorable visit and the kind of place that eats up rolls of film and fills up memory cards.

This small museum has a few good examples of Cham sculpture and pre-Cham Bronze Age pieces. More for school trips than international tourists, bul you can expect signs in Vietnamese and English. If you want to continue exploring after this museum, you might check out the Quang Trung Museum some 40km-plus (more than 25 miles) south of Quy Nhon on the site of the original Tay Son Rebellion but it’s mostly for history buffs or as the second leg on a school trip including the Binh Dinh Museum. 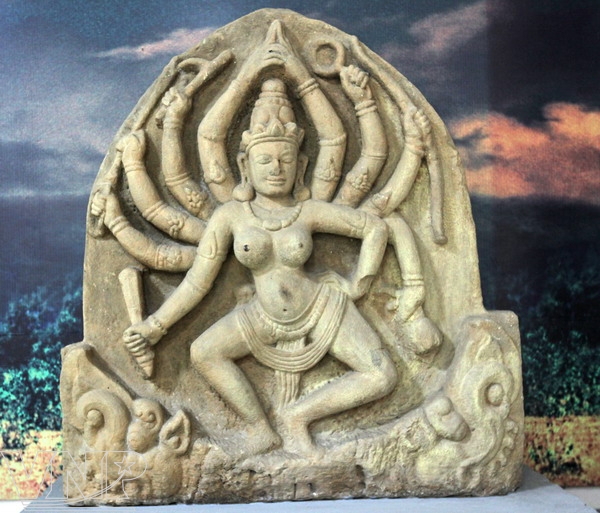 Queen’s Beach and Quy Hoa Leper Colony This half-day jaunt starts at Ghenh Rang Landscape Park just south of the Hoang Anh Quy Nhon Resort. Take the first left after the resort up the hill. The road from there winds its way high above the coast and affords great views back to the busy port and peninsula of Quy Nhon. Stop for a coffee and chat with locals in one of the little roadside stops along the way.
The road through Ghenh Rang leads over a hump of seaside land directly to the Queen’s Beach and Quy Hoa Leper Colony (2. 5km/1,5 miles south of the main beach road, either through Ghenh Rang Park or off of Rte. 1A). The beach out front, named for the wife of Bao Dai, the last emperor of Vietnam, is quite inviting, and a good place (albeit no lounge chairs) to put your feet up. It’s refreshingly free of touts and sellers, but actually you’ll find that the lack of them means you have to bring all the stuff lunch, snacks, an umbrella yourself. The leper colony is a tidy set of buildings all fenced in, yet surrounded by the homes of former patients who now live quite full lives. The seaside promenade just in front of the leper colony is picturesque; you’ll see a small grove of trees and a gallery of busts of famous scientists and great medical innovators from Greece, England, France, and Vietnam (just one woman, a Vietnamese lady). Look for the bust of Marie De La Passion (1839-1904) near the center of the park; she was a longtime French missionary at the colony. Because of the hard work of colony residents, the whole area is refreshingly free of garbage. You’re likely to run into Vietnamese school tours on weekdays, and the “Hello! Wha choo nay? ” are fast and thick. Say “Xin chao” (hello) right back. 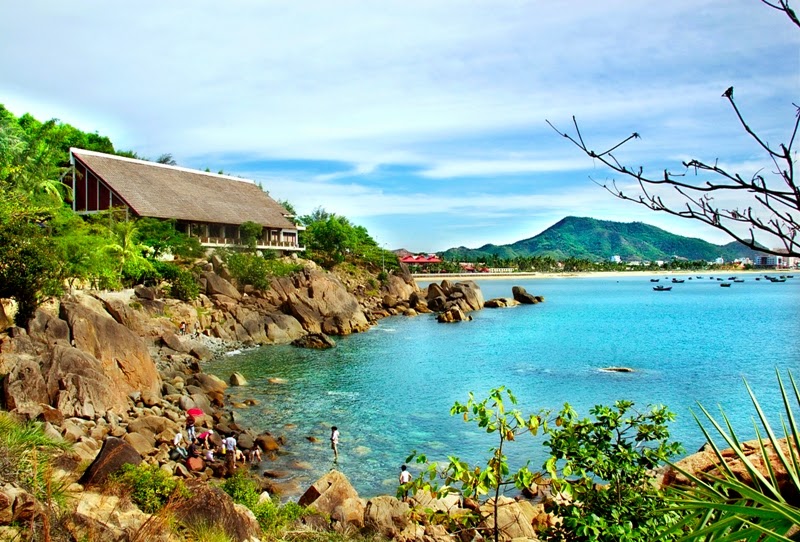 ‘Queen’s Beach,’ named for the wife of Bao Dai, the last king of Vietnam, in Quy Nhon

Revisit the My Lai Massacre
March 16, 1968: Chasing an elusive enemy and beleaguered by gruesome casualties from anti-personnel mines and booby traps set by wily North Vietnamese soldiers, the 11 th Brigade of Charlie Company led by Lt. William Calley marched into the village of My Lai, a subdivision of larger Son My. Eschewing strict protocol, motivated by hate, and incited by Calley, U. S. troops were given free reign to “search and destroy” in the village as retaliation for the many U. S. casualties. Reports were conflicting, and it was some months after the incident that anything was reported and even then, only by members of the press but more than 300 victims (some estimates say more than 500), mostly women and children, died that day in a flurry of disorder and mayhem. Calley himself supposedly sequestered a group of villagers and executed them in a ditch.

The incident was a sharp thorn in the side of U. S. military policymakers and fuel for fires of dissent and division in the United States. The My Lai Massacre, as it became called, was the beginning of the end of the war at home; the incident incited shouts of “baby killers” from antiwar protesters and brought the brutal reality of the war in Indochina to the attention of the U. S. public. The whole world began to question what many people asked from the start: “Is the U. S. doing more harm than good in Vietnam?” Calley was charged and convicted of murder, but he served only a few years before a successful appeal.
Today a large stone monument marks the ground where the atrocities occurred, and a number of small stelae stand in front of specific family homes. The site is 10km (6,5 miles) northeast of Quang Ngai, capital of Nghia Binh Province, which is about halfway between Hoi An and Quy Nhon. There’s a small museum with photographs. Many veterans groups and former war protestors make the pilgrimage here. You can arrange a tour from Hoi An or hire private transport out of Quy Nhon. Most trips visit the site as a halfway stop between Hoi An and Quy Nhon, or make it a long day trip out of Hoi An (about 4 hr. round-trip). 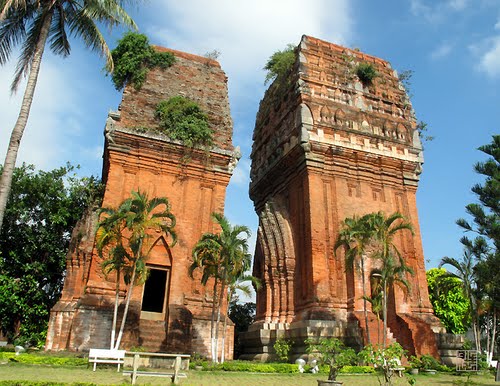 There are many Cham sights outside of the city. In fact, you’ll see some of the most dynamic on the ride in from the airport or from the Central Highlands, but Thap Doi is right in town, just off of Tran Hung Dao Street. The two lowers are unique, in that there are two (Cham towers usually come in groups of odd numbers) and that they’re in town (usually on hilltops). The sight is actually less spectacular than the walk through this quiet little neighborhood to a sea inlet where you’ll find a few local seafood places. The relief work on the tower sculptures is in good shape, particularly the floral lintels, and the little park area around the towers is a place to rest (hut you won’t be alone long; folks down this way are friendly). Just off of Tran Flung Dao on the edge of town.

Introduction of The South Central Vietnam