The west of Cambodia is made for the hearty traveler, a place to get off the track if you have the gumption. The far west, areas like the southwestern Cardamom Mountains and the northern border region with Thailand, are virtually off-limits to all but the most hearty vehicles, but Battambang is quite accessible and boasts a few interesting sights, offering a glimpse into the daily rhythms of rural Cambodia. 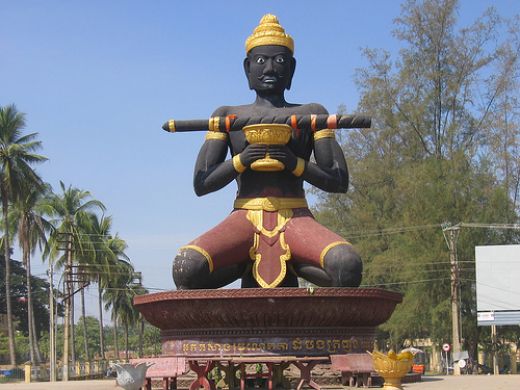 Travel west of Siem Reap means bumpy, dusty roads, best in a rented taxi (cheap to share). Where once it was just dusty pickup trucks along a pitted track notorious for banditry, the road east of Siem Reap to Phnom Penh, National Hwy. 5, is wide and paved, and means just a few hours of air-con cruising to the dulcet tenor of a bus DVD player churning out Khmer pop videos before you make the capital. How far things have come.

Poipet, the border town where most overland travelers enter or exit Cambodia with Thailand, is just a collection of dodgy casinos and persistent touts circling like hawks over the cattle-chute of tourists who pass through this bottleneck daily.
From Sisophon, to the west of central Tonle Sap Lake, the road splits; National Hwy. 6 connects with Siem Reap and National Hwy. 5 goes south to Battambang, both roads reconnecting a few hundred kilometers away in Phnom Penh.

After visiting the temples of Angkor, you can connect with Battambang by boat or bus, and from there carry on to Phnom Penh, via Pursat, or directly to the Thai border via Sisophon. It is some beautiful countryside, in places a flat plain dotted with palms and cattle grazing what appears to be sand; in others, especially near Battambang, it is lush and green, a bread basket of Cambodia.

Second only to Phnom Penh in size, little Battambang is third in per-capita income, eclipsed by the rising star of Siem Reap. Over the centuries, the town switched hands between Thailand and Cambodia, and was under Thai control as late as the 1940s. The people of Battambang did resist the initial coup d’etat of the Khmer Rouge in the late 1970s but succumbed under heavy fighting, and the area became a Khmer Rouge stronghold.

Battambang sits on the west bank of the Sangker River, which connects with the Tonle Sap; daily boats carry tourists along this picturesque route (best to avoid in the dry season, though). The city is also the heart of one of the country’s most productive farmlands, and the surrounding area is lush with growth. Fields of mango, papaya, jackfruit, and milky fruit, as well as peanuts, corn, and green beans, are well irrigated (note the long green hoses connecting fields), and a tour out into the countryside by car or motorbike is what is really on offer here. Battambang also has a strong colonial history, evident in the town’s many French-style villas and storefronts, and there’s a certain cozy case 10 this riverside burg.
At the traffic circle on the eastern end of the city, find a large statue of Ta Dumbong, the legendary Khmer King who founded order and security in the town and surrounding area with what is the town’s namesake, a Bat Dambang, or a “Disappearing Stick.” 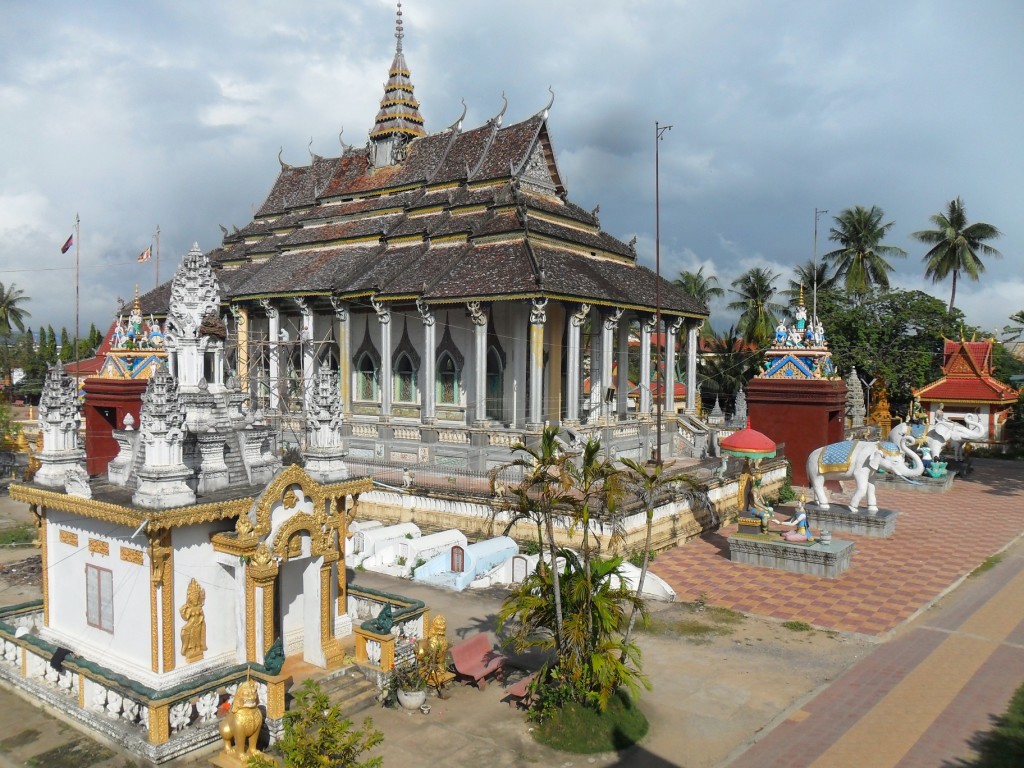 Important warning: Battambang was heavily mined during Cambodia’s late troubles, and many of the NGO folks you’ll meet out this way are here in support of teams who do the very dangerous jobs of removing land mines from rural areas. As such, do not venture too far afield in the countryside, at least not by yourself, and stick to well-worn paths wherever possible.

Attractions
A wander among Battambang’s classic crumbly colonials, all of which are colored a deep yellowish tan that lights up in the morning and evening light, makes for nice city walking. A few Buddhist temples are scattered around town and south of the city is the large statue of a kneeling Ta Dambong, the legendary founder of peace and stability in the region, holding the “Disappearing Stick” from which Battambang gets its name.
The real sights in this area are the rural temples and beautiful countryside. A 1-day trip can get you to all of them, and as much fun are the rural stops in between: a visit to a farmer’s field, perhaps, or to roadside juice stands. A trip to Wat Phnom Sampeou and Wat Banang is a good circuit, beginning at Route 10 on the west end of town and then returning along the river. Most motorbike drivers will try to talk you into a trip back on a small metal and bamboo, motor-driven platform that sits on top of the train tracks, a common form of transport, considering that the train passes only once each day. A visit to Wat Phnom Ek is an additional trip in the other direction.

Just a short 8km (5-mile) drive from Wat Phnom Sampeou and included in most day trips out of Battambang, the Angkor-era ruins of Wat Banang are nothing in comparison with the stunning temples of Angkor, of course, but for temple buffs or burgeoning archaeologists, Wat Banang’s five Angkor-style towers, which predate the penultimate Angkor era, are a unique insight into the development of building styles. Reached by a long, steep staircase of 298 laterite steps, the temples themselves are hewn in rough latcrite, with some of the original sandstone facing and Apsara decorations, many with the faces chipped off during one of Angkor’s iconoclastic revolutions, still intact. Views Irom the top are lovely. 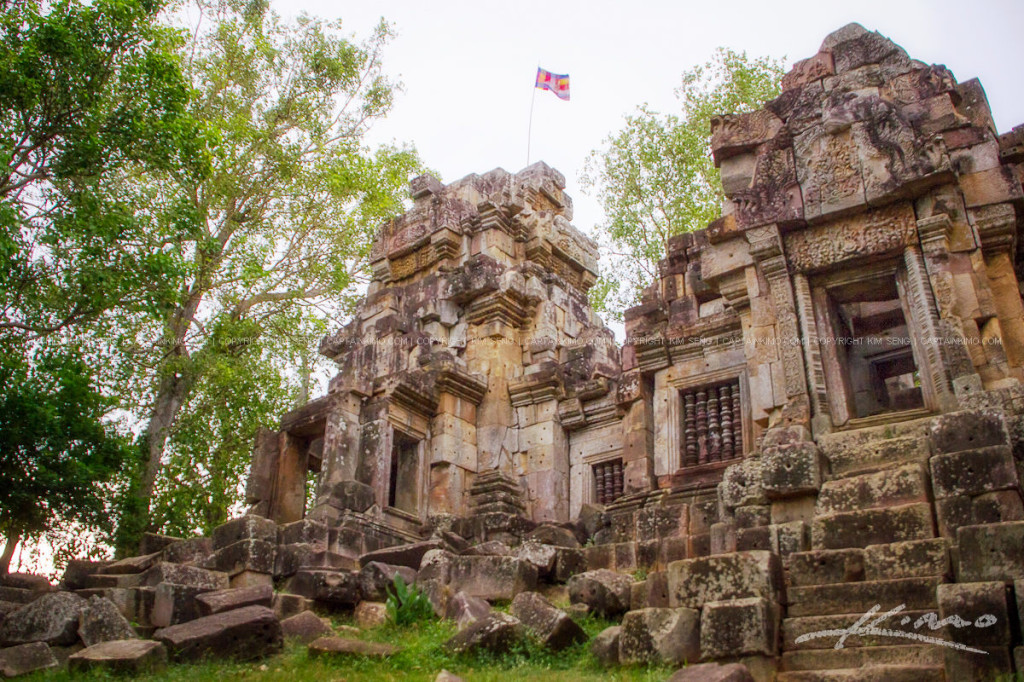 Wat Ek Phnom, on the north end of town, is another pre-Angkorian ruin. The hilltop temple of Wat Phnom Ek is, like Wat Banang above, in relatively good condition, with some carving intact.

Wat Phnom Sampeou A 2002 reconstruction of a Buddhist temple built in 1964, Wat Sampeou is a dynamic little hilltop temple, its towers jutting out of the top of a steep hill, one of the only high points in a wide, flat plain. The temple is best known as Battambang’s “Killing Fields,” like Choeung Ek outside of Phnom Penh, where thousands of concentration-camp victims of the Khmer Rouge were killed. At Sampeou, victims were slaughtered and thrown into deep caves, two of which now house small temples and monuments. A visit here follows a circuit, first to the caves and a small temple that was once the prison building of the concentration camp here, and then to the nearby hilltop temple. The temple itself is not incredibly interesting just a few spires and some shaded meditation areas and statuary but the views across the plain are stunning and the monks are quite friendly and talkative. The path then leads back down a steep path to the entrance. 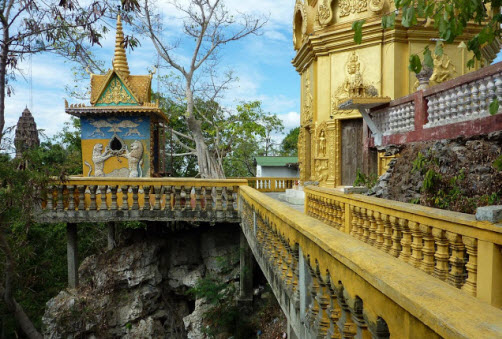 Phnom Sampeau,The temple on the hill at Battambang, Cambodia

When you arrive at the base, you’ll be swarmed by a group of young guides. One of the lads can take you the easy way up the hill and point out the poignant sights, saving you some time scouting around on your own. Most speak just a bit of English but are happy to talk with you and can tell you some details about the temple legend, a very confusing and ambling tale meant to be told over hours and hours about a girl named Rumsay Sok, who was courted by the Khmer king and through a series of magical events and the intervention of chickens, crocodiles, and a storm at sea used her magical hair to dry up the valley and create the mountains that represent characters in the legend. Your guide can point out the nearby Crocodile Mountain, as well as a small statue of the magic lady.