If the 200-year-old banyan could speak, it might tell stories of the 19th-century tradesmen who worked on the avenue out front, the arrival of the French, or the introduction of the automobile.

It could speak of the years when revolutionary murmurs became skirmishes and barricades lined the streets of the Old Quarter, or of a time years later when a full- scale war, with an enemy that attacked from the skies, almost completely evacuated the city. It might talk about the quiet years after peace in 1975, years of austerity. And then it might tell of one-time enemies returning as investors, bringing recent years of capitalistic excess. 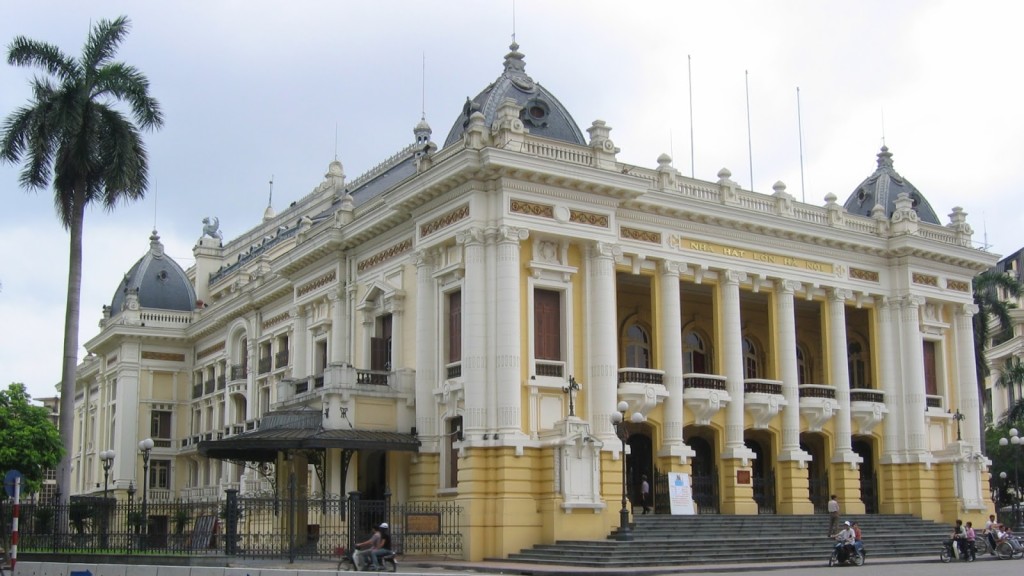 The most obvious reminders of the past in Hanoi are written in the vestiges of pre-colonial and colonial buildings low facades tucked beneath towers of concrete, especially in the city’s Old Quarter. But even these centuries-old structures are recent, considering the rich history here that dates back thousands of years. Through it all, stalwart and struggling for its patch of ground, the old banyan looks on, ready for whatever changes come its way and grappling its crooked, arms around new hunks of pavement, choking on motorbike fumes.

Hanoi ranks among the world’s most attractive and interesting cities. Originally named Thang Long, or “City of the Ascending Dragon,” the city was first the capital of Vietnam in A.D. 1010 and has had many names until its current incarnation. The name Hanoi, in fact, means “Bend in the River” and denotes the city’s strategic location along the vital waterway. Historians liken the life-giving Red River its banks crowded with green rice paddies and farms to the Tigris and Euphrates rivers, a cradle of civilization. Even when the nation’s capital moved to Hue under the Nguyen dynasty in 1802, the city of Hanoi continued to flourish, especially after the French took control in 1888 and modeled the city’s architecture to their tastes, lending an important aesthetic to the city’s rich stylistic heritage, even expanding the city and adding rail connections over the Long Bien Bridge in 1902. In 1954, after the French departed, Hanoi was declared Vietnam’s capital once again. The city boasts more than 1,000 years of history, and that of the past few hundred years is marvelously preserved. 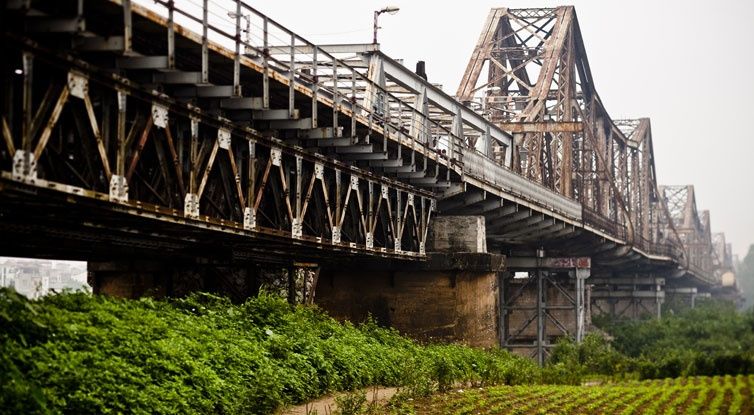 Hanoi has a reputation, doubtless accrued from the Vietnam War years, as a dour northern political outpost. The city is certainly smaller, slower, and far less developed than chaotic Saigon, but Hanoi still seem to be in constant motion an endless stream of motorbike and bicycle traffic. You’ll see some vestiges of Soviet-influenced concrete monolith architecture here, along with plenty of beautiful, quiet streets and tranquil neighborhoods to explore. The city’s placid air gives it a gracious, almost regal flavor. Hanoi is dotted with dozens of lakes small and large around which you can usually find a cafe, a pagoda or two, and absorbing vignettes of street life.
Among Hanoi’s sightseeing highlights are the Ho Chi Minh Mausoleum and Museum; the National Art Museum; the grisly Hoa Lo Prison (also known as the infamous Hanoi Hilton); central Hoan Kiem Lake, where Hanoians enjoy brisk morning walks or tai chi in a tranquil city landmark that symbolizes the city’s mythical; and the Old Quarter, whose narrow winding streets are named after the individual trades practiced here since the 15th century. Hanoi is Vietnam’s cultural center, and the galleries, puppetry, music, and dance performances are worth taking in. 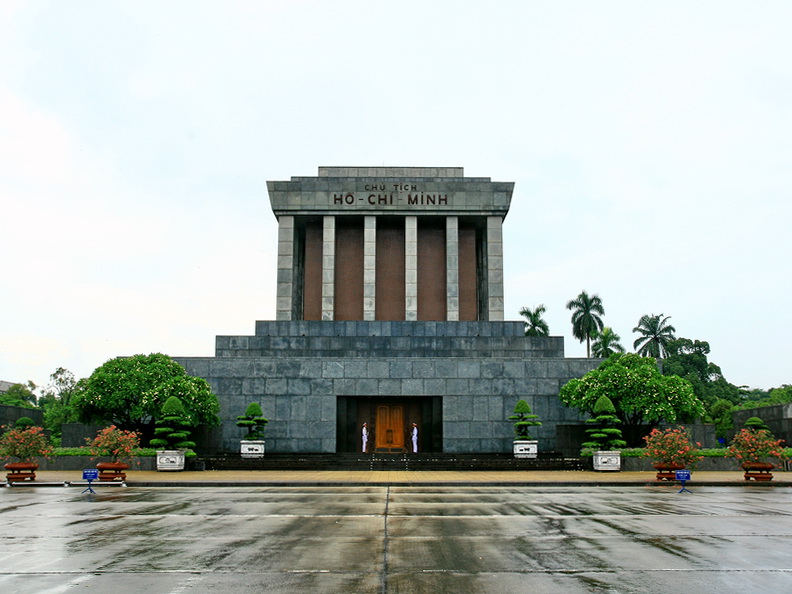 You might also want to use the city as a base for excursions throughout the north to Halong Bay and Cat Ba Island, to the Ninh Binh area south of Hanoi and Tam Coc, the “Halong Bay in the rice fields,” or for a primate encounter at Cuc Phuong National Park. In addition, Hanoi is a jumping-off point for rugged travel in the highlands of the northwest, among hill tribes and along high passes lined with lush terraced rice farms in a loop that includes historic Dien Bien Phu and the old French holiday escape of Sapa, the most popular town in the north, easily reached by overnight train from Hanoi .

Flying Dragons & Thieving Turtles: Hanoi’s Founding
Originally, at its prehistoric founding as Thang Long, Hanoi was called “The Ascending Dragon.” The dragon that ascended, so the story goes, created civilization as we know it along the Red River Valley and then plunged to his sleep in Halong Bay, thereby creating the grand karst slopes today a UNESCO World Heritage Site. The dragon is the symbol of the city, and you’ll find references to it wherever you go.
Hanoi’s other important creation myth is one oddly echoed by the legend of King Arthur and his rise to the throne after receiving the sword Excalibur from the Lady of the Lake. “Strange women lying in ponds distributing swords is no basis for a system of government,” says Michael Palin’s character in Monty Python and the Holy Grail, the spoof of the Arthur legend, and Hanoi’s mandate granted by a giant turtle in Hoan Kiem is equally ridiculous, but a great one for putting the kids to bed at night. 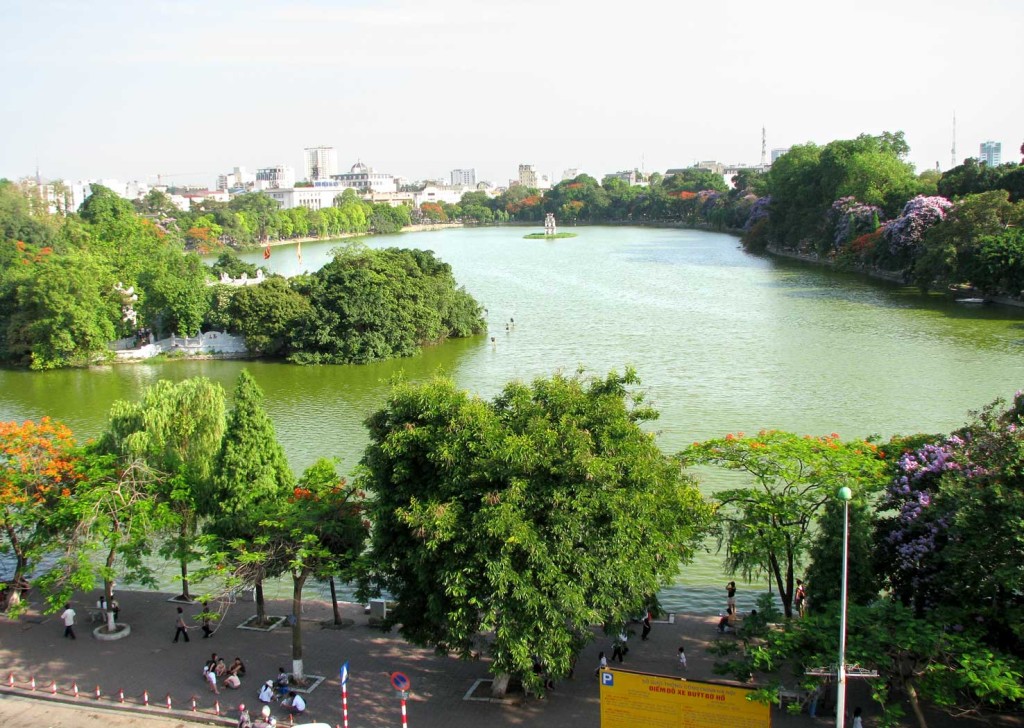 Le Loi, the first king of a united Viet people, asked the powers in heaven to help him vanquish the Chinese In the 2nd century a.d. His answer came from a giant turtle that rose from the depths of Hoan Kiem Lake and offered him the sword that he would use to drive the Chinese out. (Vietnamese history is full of valiant tales about driving the Chinese out.) When Le Loi returned to the lake to give thanks, the turtle rose again out of the water and took a firm jaw hold of the sword and dragged it to the watery depths, a sign that the citizens could lay down their arms and the city would prosper in peace. The turtle fooled old Le Loi, because the Vietnamese would suffer under Chinese oppression for centuries to come. The myth is best depicted at the Thang Long Water Puppet Theater. And keep an eye out for a unique breed of lake turtles you’ll see them basking on the central island. 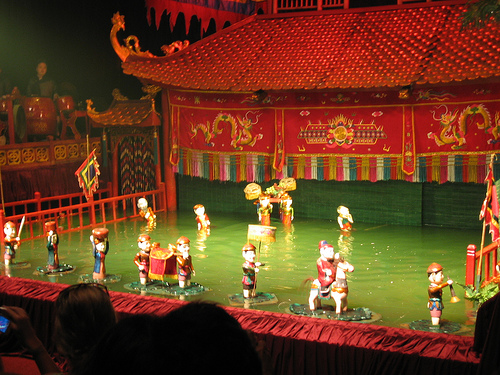