Vietnam is an S-shape peninsula that borders China to the north, Laos to the west, and Cambodia to the southwest.

Covering about 331,520 sq. km (129,293 sq. miles), it’s roughly the size of Italy, but only a small percentage of the land is arable and habitable because of the Annamese Cordillera and other steep mountain ranges and mountain Vietnam has a varied and lush topography, with two massive deltas (one in the north and one in the south), tropical forests, craggy mountains and rock formations, and stunning coastline. Vietnam is only about 1,613km (1,000 miles) north to south as the Crow flies, but by road and along the stretch of coastal highway, it’s about 3,260km (2.021 miles). Vietnam also claims thousands of islands of its coast.
Rice is the staple of Vietnam, and the economy and society relies heavily on its production. The shape of Vietnam is often compared to a common sight in any Vietnamese market: the tenuous balancing of a bamboo pole slung over one woman’s shoulder as she hangs pendulous bundles on either side of her body. The thin central coast of the country is the bamboo shaft of the fragile contraption, and the productive rice-growing regions of the Red River Delta in the north and the fertile Mekong Delta in the far south are the overflowing “bread baskets” that hang from the pole. But drawn to scale, it might be a bit lopsided the Mekong is exponentially more productive. 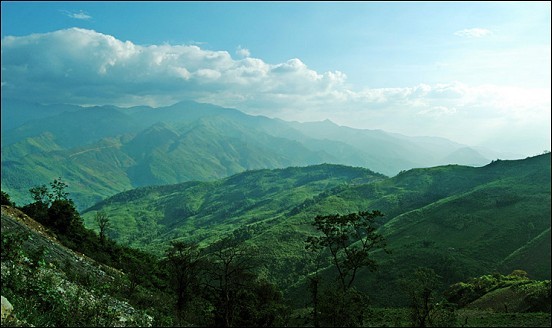 The North Bac Bo is the Vietnamese term for the north, the cradle of Vietnamese civilization along the country’s own version of the Tigris and Euphrates, the Red River Delta. Called the Song Hong in Vietnamese, the river is the epicenter of prehistoric culture and early empires, where organized wet rice cultivation, done on flooded paddies and requiring extensive community cooperation, began. The Red River Delta gave birth to the first Au Lac dynasty and earliest capital at Co Loa just north of Vietnam’s current capital, Hanoi, which lies at the heart of the region. Just east of Hanoi, the busy port of Haiphong leads the way to the 3,000 islands of the stunning Halong Bay; most of the Islands are unlivable but are a stunning set piece of towering karst, or limestone, forma lions shrouded in jungle. Where Hanoi’s creation myth speaks of the ascending dragon Thang Long, the mountains of the bay are said to be the footprints of the descending dragon, or Ha Long, as it went to its home in the ocean deep.
The northern highlands, occupying the northwest tip of Vietnam, are known for their beauty, with jagged mountains rising over sweeping green valleys. The inhabitants are mostly ethnic minority hilltribes still somewhat isolated from civilization. Popular tourism destinations are Sapa, Lao Cai, and Dien Bien Phu. Vietnam’s tallest mountain, Fansipan (3,143 m/10,309 ft.), overlooks Sapa, part of the mountain range the French dubbed “The Tonkinese Alps.” 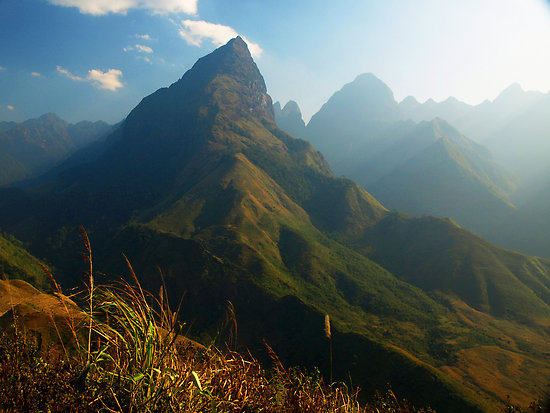 Central Central Vietnam, or Trung Bo, flanks the long line of the Trung Son Mountain range, also called the Annamese Cordillera. In this volume, I divide the center into the north center, where you’ll find the cities of Vinh, Hue, Danang, and historic Hoi An, and the south center, where you’ll find the beach community of Nha Trang, as well as the temperate, hilly Central Highlands region, with small towns like Pleiku and the city of Dalat.
Traveling south from Hanoi, visitors trace the central coastline, location of major cities Hue, Danang, and Hoi An. The small town of Vinh, birthplace of Ho Chi Minh, is just hallway between Hanoi and Hue. And Hue (pronounced Hway), a name familiar from the war years for its strategic location near the 17th Parallel, is Vietnam’s former capital and imperial city (1802-1945). Going south from Hue, crossing over the high Hai Van Pass before dropping back to the coast and the small beach area of Lang Co and nearby Bach Ma National Park, is Danang, Vietnam’s fourth-largest city and a port town whose major attractions include the museum of Cham antiquities. Nearby Hoi An, a major trading center from the mid-16th century, shows the architectural influences of Chinese and Japanese traders who passed through and settled here, leaving perfectly preserved buildings. It is now once again a center of cultural exchange and commerce, but is tourist-focused with souvenir centers and tailor shops (also lots of new resorts on nearby Cua Dai Beach).
Tracing the coast farther south from Hoi An, pass through the small port city of Quy Nhon, uninteresting but for a few nice new resort offerings, and then on to Nha Trang, Vietnam’s preeminent sea resort, where new up market offerings are popping up like mushrooms on a log. Just inland from the south-central coast area, you’ll find the Central Highlands area, a temperate, hilly region occupied by many of Vietnam’s ethnic minorities. Most popular and developed for tourists is historic Dalat, a resort town nestled in the Lang Bien Plateau, established by the French at the turn of the 20th century as a recreation and convalescence center. The scenery looks something like Switzerland in summer, with high hills studded with tall pines and peppered with quaint, French contemporary villas, most in a sad state of decay. North of Dalat, the Annamese Cordillera mountain range hosts the little hill town of Buon Ma Thuot, Pleiku, and Kontum, all names familiar from the war era and home to some of the hottest fighting at that time. 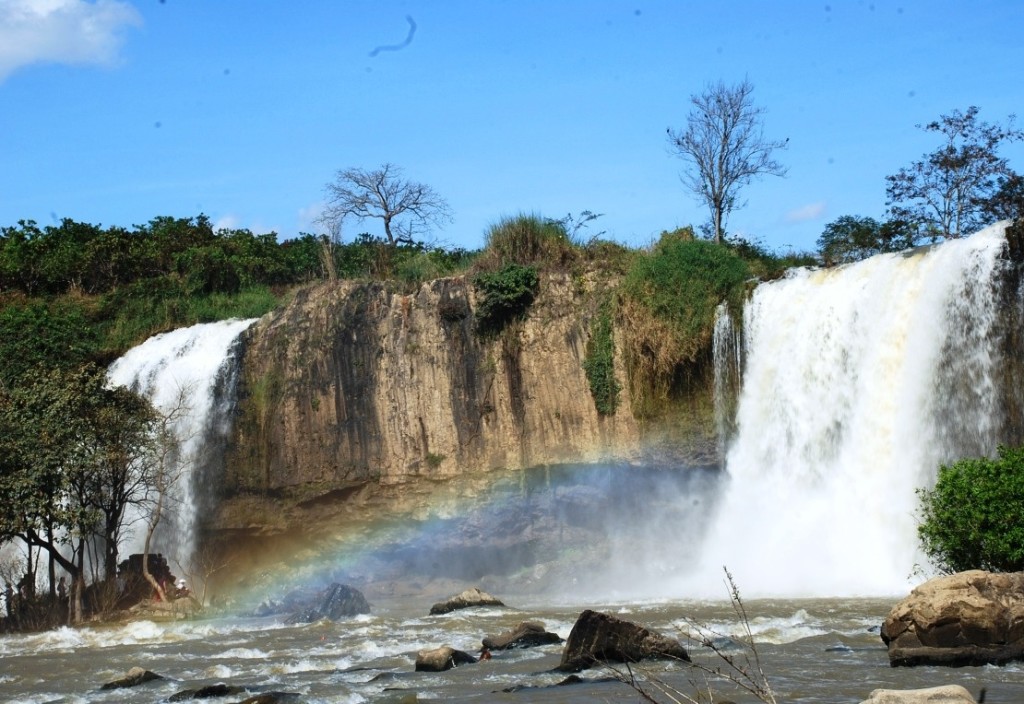 The South Southern Vietnam, called Nam Bo, is home to Vietnam’s largest city, bustling Ho Chi Minh City, also known as Saigon. Vietnam’s largest cosmopolitan area is like a region unto itself, with a population of more than eight million spreading out over a wide area of urban and suburban sprawl. Tay Ninh is a town just to the north and west of Saigon that’s home to the unique Cao Dai sect and the end of the Ho Chi Minh Trail at the Black Mountain. Some of the heaviest fighting during the war took place here, much of it planned from the tunnels of Cu Chi.
You may be interested in 1-Day Cao Dai Temple & Cu Chi Tunnel tour. 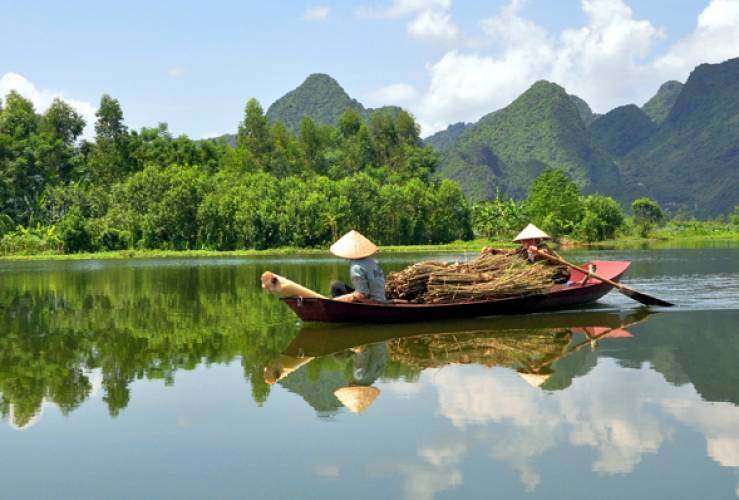 The south is hotter, in climate as well as cuisine. South of Ho Chi Minh City is the Mekong Delta, where, after a 4,500km (2,790-mile) journey from the mountains of Tibet, the mighty Mekong splits into nine smaller branches and a wide alluvial plain as it deposits its silt on the way to the East Sea of Vietnam. The well- irrigated delta is the most agriculturally productive region of Vietnam, where most of the country’s rice is grown, and where the population has swelled in recent years with increased productivity and industries like fish farming and shrimp cultivation. The climate of the delta is tropical; the lower delta is untamed swampland.

Please find out more about Tours in Vietnam or Mekong River Cruises.