Most visitors give Pleiku a pass and move on to the quieter town of Kontum, which played its own important part in the Vietnam War and has a number of interesting sights outside of the city. 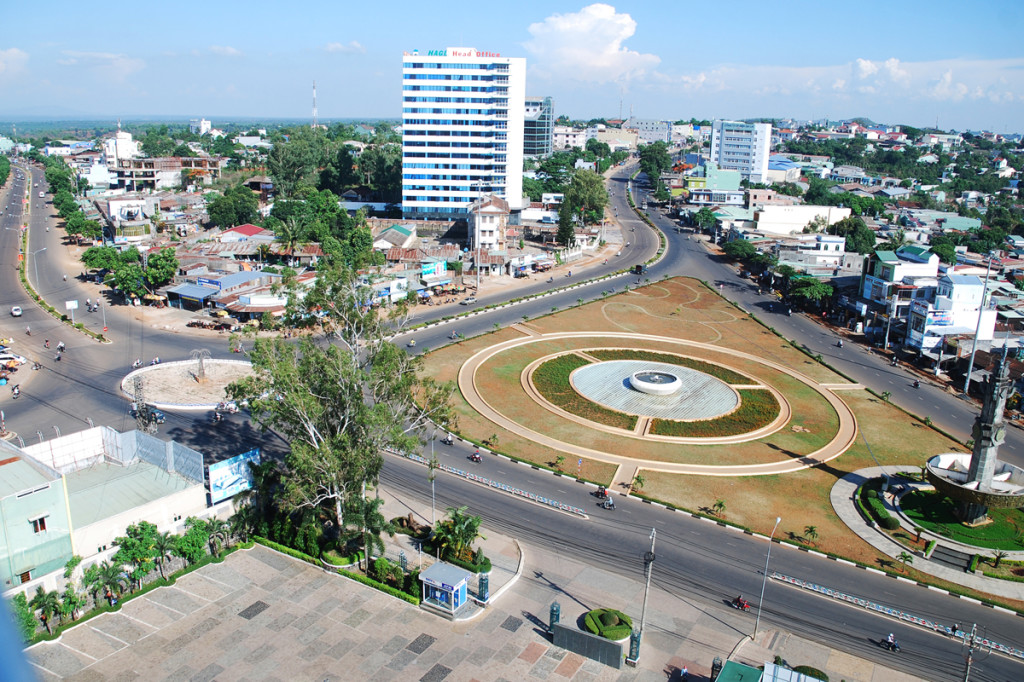 Komtum, and the hills surrounding the provincial city, were home to some of the heaviest lighting at the war end in 1972, and again after the “Vietnamization” of fighting, when the last holdout units of South Vietnamese soldiers were pummeled into submission along rocky ridges north of town. A motorbike or car ride north of Kontum brings you to the likes of Charlie Hill and Dak To, now denuded peaks, and a short ride up the now-paved Ho Chi Minh Trail takes you among some great mountain scenery and ethnic villages. Good tours can be arranged out of Kontum. The city itself has just basic services and, apart from the few interesting in-town sights, is as dull as though less busy than Pleiku. Do take a walk out along the Dakbla River. 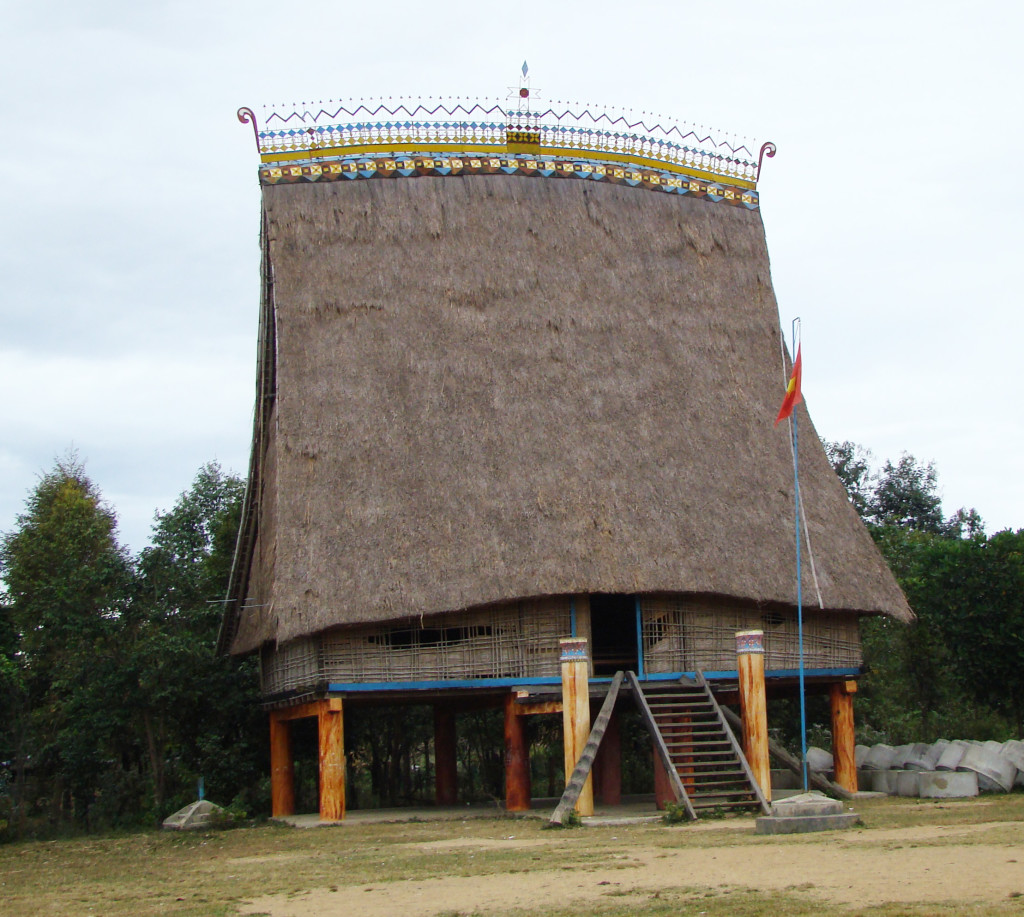 Kontum is the last jumping-off point before many travelers hop on the newly built Ho Chi Minh Highway where the Ho Chi Minh Trail once ran. The road, also known as Hwy. 14, connects Kontum with Danang and Hoi An along the coast. The route is popular for travelers riding along with Easy Riders on motorbike tours out of Dalat.
The area around Kontum is home to a number of ethnic minorities: Large populations of Bannar people (famed for their high-peaked roof houses) live near the city center, and there are Sedang and Bo villages here, too. Accommodations and dining options are Spartan, but the interesting sights are worth the journey.

Getting There
Kontum is 50km (31 miles) north of Pleiku and 245km (152 miles) from Buon Ma Thuot. Coastal Quy Nhon can be reached by road, via Pleiku (about 5 hr.), and the new Ho Chi Minh Trail, Hwy. 14, connects with Danang, far to the north and down along the coast a 12-hour ride (some Easy Rider tours overnight along the way). All of these routes can be done by local bus a very uncomfortable, slow option. Going by private car, motorbike for the adventurous or preplanned tour is your best options.

Warning: If braving the local buses out of Kontum, know that the bus-station folks will take you for a real ride of resentment. Ticket prices are posted, but they don’t sell tickets to foreigners at booths (Kontum is still considered “off-limits” to independent travelers). This means that foreign visitors have to haggle with the surly busmen for a reasonable fare. Avoid the hassle and come with your own wheels. Or smile and pantomime that you won’t get on the bus for that price, buy yourself a coffee, and let your amateur thespian take. 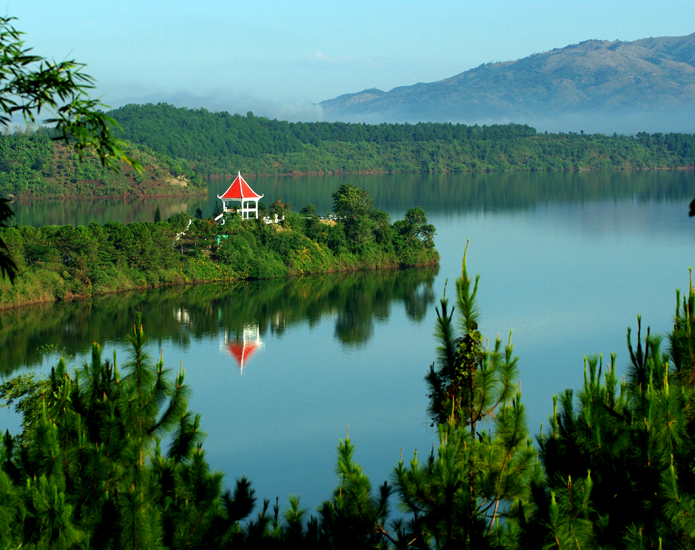 The sights in both Pleiku and Kontum are all far out in the hills, so you’ll have to arrange some kind of transport or tour. This is popular turf for the Easy Riders from Dalat, and, in fact, you’ll be grateful you have a guide here: Most of what you’ll want to see in the countryside, whether coffee plantations or rural homes and workplaces, requires some kind of introduction or ability with the Vietnamese language. You’re sure to meet a few cycling these roads are memorable. You can rent rickety little city bicycles in Kontum and hit the few sights around town, or even go out to the Konkoitu Village some 5km (3 miles) out of town, but otherwise you’ll need some good, reliable wheels. Motorbikes can be rented from the hotels listed below, and all hotels can arrange tours to outlying areas, as can the folks at Kontum Tourist. 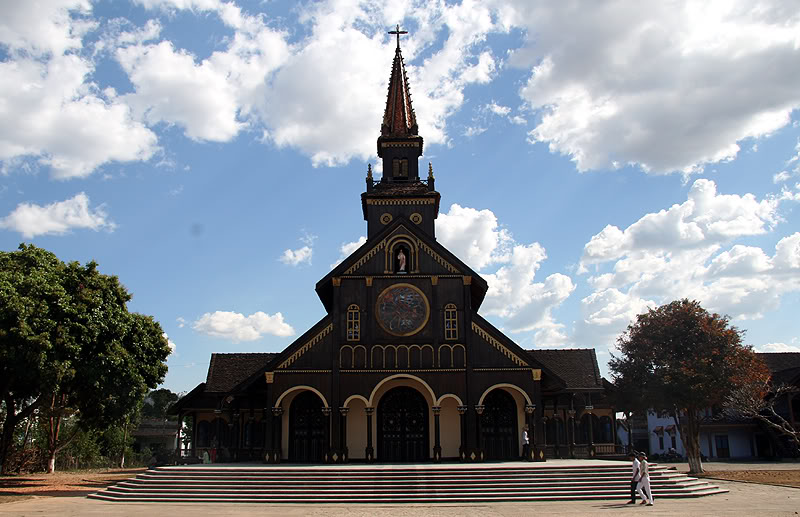 Built in 1932 on the site of an earlier, more humble structure, Kontum’s main church is still a busy place, and on Sunday ministers to a large population of the converted, mostly ethnic hill tribe villagers from the surrounding hills. Check out the intricately carved mantles over the main entrances and the cool, contemporary stained glass featuring modern saints the likes of French missionaries wearing cravats. A model of a Bannar house is in the courtyard, as is a glowing white statue of Mary and child. The orphanage at the back of the main church building is a wild, cacophonous experience. Prepare yourself. A short walk down the steps, and you’re attacked by groups of youngsters eager and well accustomed to talking and goofing with foreign visitors (also keen for the sweets and gifts that many visitors bring with them). These children, most orphaned by disease, are cared for by nuns, and visitors are welcome to volunteer their services. In fact, I met a small contingent of Americans doing relief 259 works at the school.
Along the river at the town center. Dawn-dusk.

Seminary and Ethnic Hilltribe Museum This massive wooden structure of timber and frame was left by aggressive French missionaries who, from a humble skeleton crew in 1848, grew steadily in numbers as they sought to bring the seemingly heathen hilltribe folks into the fold. This seminary was built in 1935 and was at its heyday under Martial Jasmin, the first Catholic bishop of the area until 1940. The French were forced to skedaddle as fighting flared up from the 1950s, and activities at the seminary died down. But from the time of reunification in 1975, a Vietnamese bishop was installed at the head, and the seminary now ministers to the needs, both humanitarian and spiritual, of great numbers of hill tribe villagers, all of whom wait in long queues outside the many offices and the clinic here.

The Ethnic Hill tribe Museum tells as much about the story of the monastery as it does about hill tribe culture, listing the lineage of bishops with photos of the seminary’s many projects over the years for improved irrigation, agriculture, health, and education. The museum springs from the more modern, post-Vatican II notion of spreading the faith without completely squelching rich local traditions. For instance, some practices, such as the making of large wooden representations of human figures to don graves (the statues decay over time into the most stunning expressionistic pieces), were accepted as part of local Christian practices. You need to visit the museum with a docent, a kind and informative tour guide.
Along Tran Hung Dao heading east of town. Check in at the main desk to contact a docent. Donations x accepted. Mon-Sat 8-11 am and 2-4pm.

Thing to Do and See in Siem Reap, Cambodia