I first time came to Cat Ba in 1998 on an overnight tour by boat from Halong city. At the time, the little bay of Cat Ba was choked with beat-up old fishing junks, and the quiet little Oceanside strip had but a few budget hotels. A sturdy Russian Minsk motorbike was the main mode of transport. Oh, but the times they are a changing. 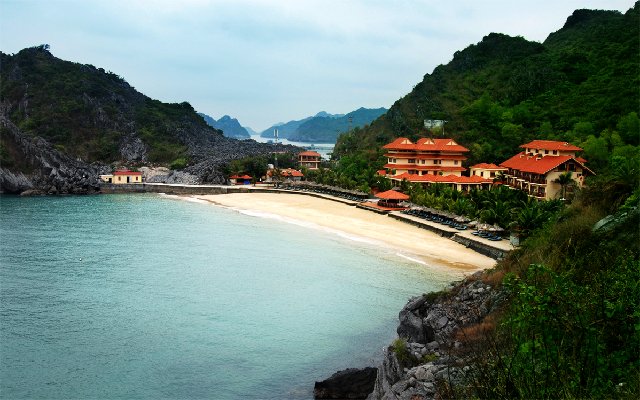 The population of little Cat Ba Island is now over 30, 000, the bay has been cleared of junks (all fishing vessels must park a few hundred meters offshore), and the main seaside avenue has been widened. There are a number of midrange high-rise hotels, and even a luxury resort on the Cat Co III beach just north of town. Direct high-speed boat service runs from Hanoi via Haiphong, or, even better, try the direct bus that goes from the town center, rides on a ferry, and delivers you to the center of Haiphong or on to Hanoi. The town is very busy with Hanoi weekenders, especially in the summer, and thus best avoided then (the hotel prices are often nearly double on summer weekends). Most travelers zip through on 1-night package tours, but it’s best to arrange your own transport to this area. Tours to Cat Ba limit you to dinner with the group and a strict schedule. I recommend booking a tour with a group for transport only or making Cat Ba your last stop on a budget tour of Halong Bay, and then arranging your own hotel and making your own schedule for your time in Cat Ba. The Cat Ba National Park has some good trails to explore, and the interior of the island and the rocky eastern coast are great places to get off the map (contact any hotel tour desk for an all-day tour of the island). You might want to check out the April 1 festival that commemorates Ho Chi Minh’s visit to the island: It’s quite a grand fete, with dragon-boat races and a big fashion show.

The Cat Ba National Park, established on March 31, 1986, takes up some 50% (15, 200 hectares/37, 544 acres) of the island’s mountain and coastal areas, with vast tracts set aside for “primary care and stringent protection” of endangered species. The park’s low peaks— the highest is Cao Vang, at just 322m (1, 056 ft.) are a dynamic, verdant setting. Cat Ba is cool year-round, with an average temperature of 73/74°F (23/24°C). In July, it can get up to 82/83°F (28/29°C), and in January and February, it can go as low as 61/62°F (16/17°C). Rainy season is from April to November. The park is comprised of limestone evergreen forests, upland flooded forests, coastal mangrove forests, inshore coral reefs, and extensive areas of limestone outcroppings laced with caves. All is evergreen tropical monsoon forest. 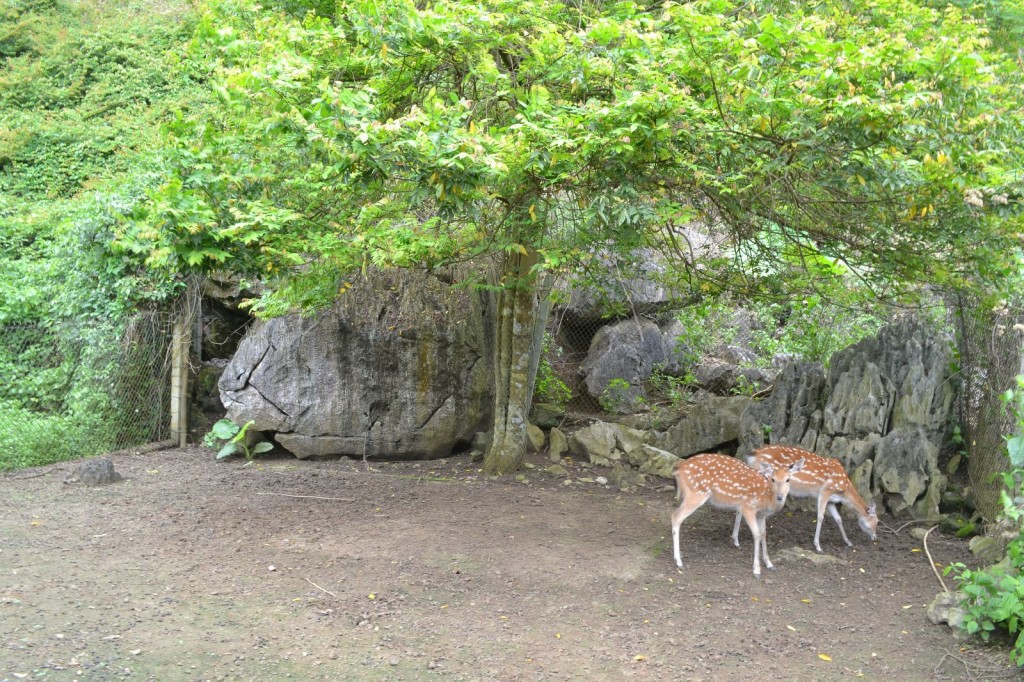 A Couple of Deer in Cat Ba National Park

The park supports a veritable Noah’s Ark of diversity, with drought-resistant lizards and herbivores, and over 30 mammals, including langurs, civets, leopards, rhesus macaques, and barking deer. Many species in the park are rare or endangered, especially the golden-headed langur, which is unique to this area but has a fragile population of an estimated 100 individuals. Ongoing efforts try to prevent hunting in the park. You might also see pythons, vipers, and water snakes, but yours only real chance of catching sight of something unique is to take a lull day hike through the park with a guide. 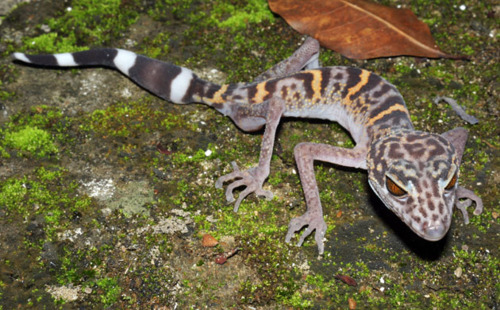 Coastal bird life is astounding, and on any journey along the island’s coast, you can see some of Cat Ba’s nearly 70 bird species, both tropical monsoon birds and migrants. Water birds, like the sea eagle, kingfisher, and teal, can be spotted along the Island coast. Inland, find the likes of the great hornbill, the thrush, and the woodpecker. 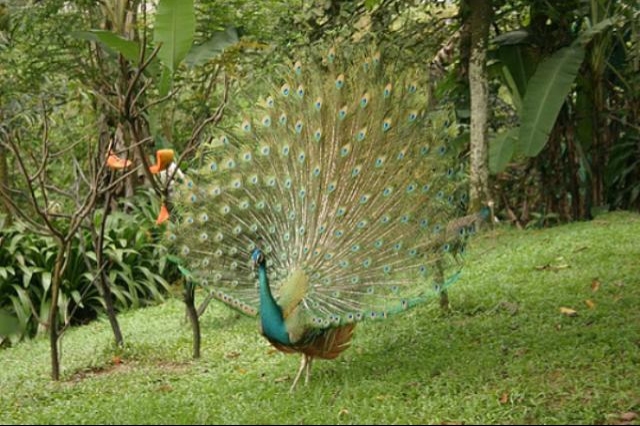 This park is geared to domestic tourists, but the scenery is fine and there are a few good hikes. The Educational Center, just on the right after the entry, has one large panel with information (in English) about the park’s many rare species, as well as advice about nearby trails. No English speakers are on staff, though, so you’re more or less on your own here, which is fine because navigating the park’s few trails is a piece of cake. 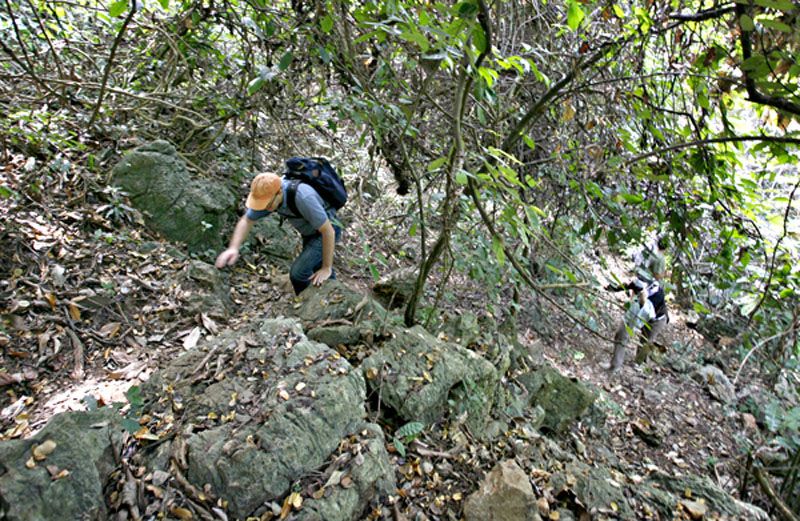 From the park entrance, walk about 1km straight back along the wide, clearly marked path, past the rather uninspired zoo with just a few unhappy barking deer in a small field, to the beginning of a good steep grade and signs for the Kim Giao Forest. Covering some 20 hectares (49 acres), the forest is of a unique hardwood prized for furniture making.

The trees are not remarkable, however just squat little things about 5m (16 ft.) high. From here the path gets treacherous, but just 1. 5km (1 mile) of hiking gets you to the Kim Giao Peak. To get to the peak, just pass the turn (on your right) to the Kim Giao Forest and follow the proverbial middle road (the fork to the far left is a steep muddy slope) to the top of the peak. The tiptop requires a good bit of rock scrambling, although there are a few ladders and metal steps set up to make things slightly easier.

Good hikes also go to Trung Trang Cave (along the road from Cat Ba Town just before the park entrance), as well as farther into the depth of the park and the Ao Ech village route to a freshwater reservoir or to the Viet Hai village. Longer routes require a good guide; ask in town about all-day hikes with a boat ride back to Cat Ba Town.

Cat Co Beaches Just thin strips of hard sand on isolated little bays at the base of Cat Ba’s cliffs, the Cat Co beaches aren’t a bad place to put your feet up for an afternoon especially after a long boat trip or for the morning before heading back to Hanoi. The more mellow members of your crew can opt out on hiking Cat Ba National Park and instead rest here and dig into a novel. Cat Co III has just seen the building of the new Cat Ba Sunrise Resort, making that beach exclusive for anything but walking by and taking a dip. (In other words, you can’t use the thatched umbrellas, but nobody owns the water. A small bribe, though, might earn you a seat in the shade at Cat Ba’s new resort). 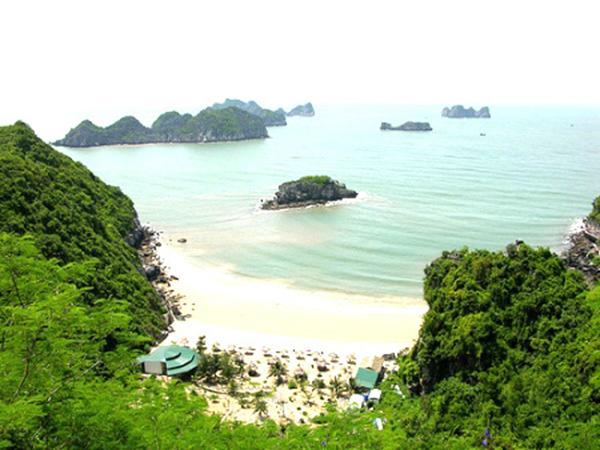 Cat Co I and II are open to the public (with a charge of just 5, 000 VND), and you can get there easily on your motorbike, by motorbike taxi for about 10, 000 VND, or by fool. From the Sunrise Resort on Cat Co III, you can follow the high-cliff walks heading north and enjoy stunning views of the bay on your way to the other beaches.

Hospital Cave On the road leading north from Cat Ba on your way from Cat Ba town to the Cat Ba National Park you’ll crest a small hill and spy first a small cave entrance and ladder off to your right. Then you’ll likely spot him: one of Vietnam’s greatest treasures. Wearing his finest dress brown drabs and stiff officer’s hat, 74-year old Mr.Khoi will likely be out on the road waving you down. You see, these are his caves, more or less. Mr. Khoi is originally from the area, but the war against the United States took him far and wide as an artilleryman in the Viet Cong. Upon his retirement, the kindly Mr. Khoi took it upon himself to be the steward of this cave complex. The labyrinth of well-designed underground buildings once housed a large hospital and recovery rooms, as well as offices and planning rooms, ammunition storage, recreation rooms, a theater, and a small swimming pool. The caves are important vestiges of the war: In fact, this is the spot where Everett Alvarez, the first American pilot shot down in combat operations in Vietnam (on Aug 5, 1964), was originally held. The complex of concrete reinforced walls set deep in the cave was built from 1960 to 1965. But Mr. Khoi himself is the most memorable part of a visit here. He lines up visitors at the entrance and gives a bellowing North Vietnamese salute before entering the cave, where he hales forth with a constant stream of information while waving his flashlight from room to room. 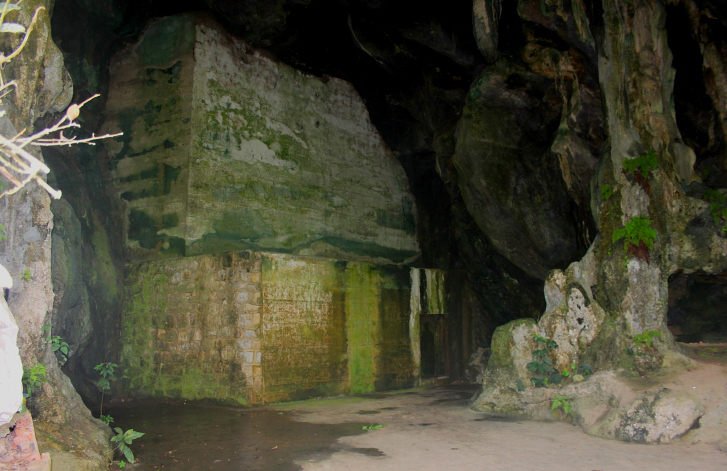 Be sure to go with a translator, or his voice will be lost. He has a wonderful message of peace and of how visitors to the cave take part in the healing and reconciliation process between Vietnam and the world and can move to the future. He even sings a rip-roaring military ballad for you. He’ll ask you to sign his book and make comments, and you’ll come away with a memory of his cherubic smile and a good feeling about life, peace, and possibilities.
On the road to Cat Ba National Park just a few clicks north of Cat Ba Town. No phone. Daily 8am-5pm (or whenever Mr. Khoi is there). 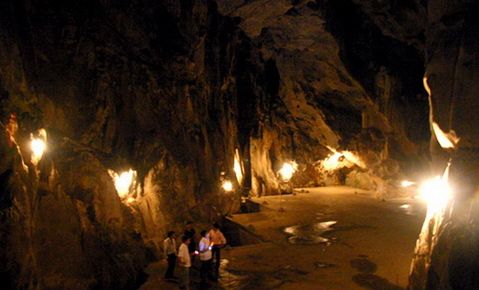