Water puppet in Vietnam is a traditional kind of art that dates back to the 11th century under Ly dynasty. The tradition rooted in the villages of the Red River Delta in the north of Vietnam where there were lots of flooding rice paddy fields and the villagers stood in the waist-deep water performing with the puppet to make entertainment. Water puppet was often demonstrated in village festivals by the farmers with the hope of a new year of abundance. 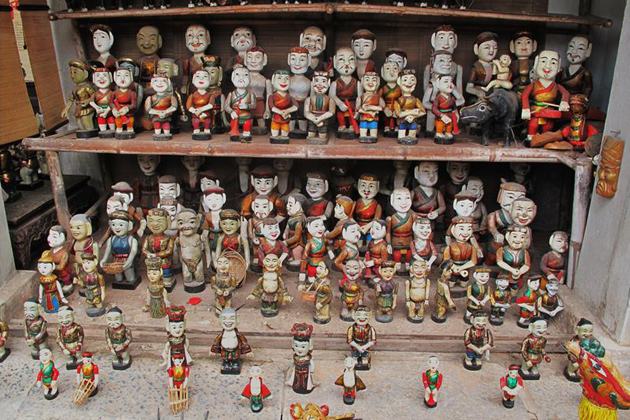 The puppets are made of wood; then they are lacquered to be endurable and waterproof. During the performances, the puppets are under the control of the puppeteers through the strings and rods hidden under the water surface. The singing of Cheo (a traditional kind of art) and the playing of puppets are processed at the same time with the aim to tell and represent the stories through the words. The performances are accompanied by Vietnamese artist orchestra who play traditional musical instrument like horns, bamboo flutes, cymbals, drums and wooden bells.
The performances are in short sketches which take the audience back to the old village life, rice harvests and dances of legendary creatures. The theme of water puppetry reflects humorously day-to-day living in the countryside of Vietnam like fishing, harvesting or festivals. Vietnamese folk tales are also well performed and one of the most famous plays is the legend of King Le Thai To and the Restored Sword. Above all, water puppetry is a good way for both locals and foreigners to relax after their hardworking life. 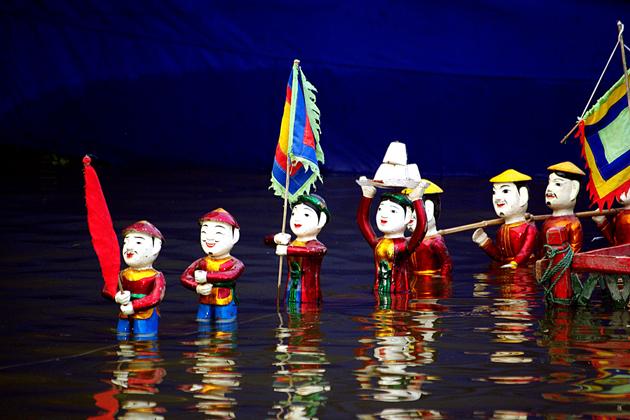 The most well-known character in water puppet is Chu Teu. In Vietnamese, “Teu” means laugh. He is a jester who always gives smart comments on social and political realities. He appears in a simple open vest and loincloth with a smiling face and small bamboo-leave fan.
Nowadays, Thang Long Water Puppet Theater is one of the most reliable and popular tourist attractions in Hanoi which provide water puppet show service. Located by the Hoan Kiem lake shore, the theater is always busy and the tickets are sold out in advance, so ticket booking is absolutely recommended. Each performance will last around one hour and is often divided in to 17 short sketches. The common entrance fee is VND 100,000 or $5. Moreover, if you want to photograph or video the show, you will need to pay an extra amount of money.
Address: 57B, Dinh Tien Hoang Street, Hoan Kiem District, Hanoi.
Opening hour: Daily 15:00, 16:10, 17:20, 18:30, 20:00
Ticket price: From VND 100,000
Tel: +84 43 824 9494

Discover the Highlight of Ninh Binh – Trang An Landscape Complex

12 Experiences Should Try Once to Hoi An