The misty, mountain scenery of the far north conjures up classic Indochina imagery of striking rice terraces, golden, thatched huts and dense, tropical forests, all dissected by a cross-hatching of waterways.

Here, life is beautifully interwoven with the ebb and flow of the rivers. The mighty Mekong forges its way through picturesque towns, such as Pak Beng and Huay Xai, affording visitors a wonderful glimpse of riverside life, while, to the east, the Nam Ou attracts visitors to Nong Khiaw and, the latest traveler hot spot, Muang Ngoi Neua. The wonderful upland areas are home to around 40 different ethnic groups, including the Akha, Hmong, Khmu and Yao, and it’s not surprising that the country’s best trekking is also found here.

Luang Namtha and around 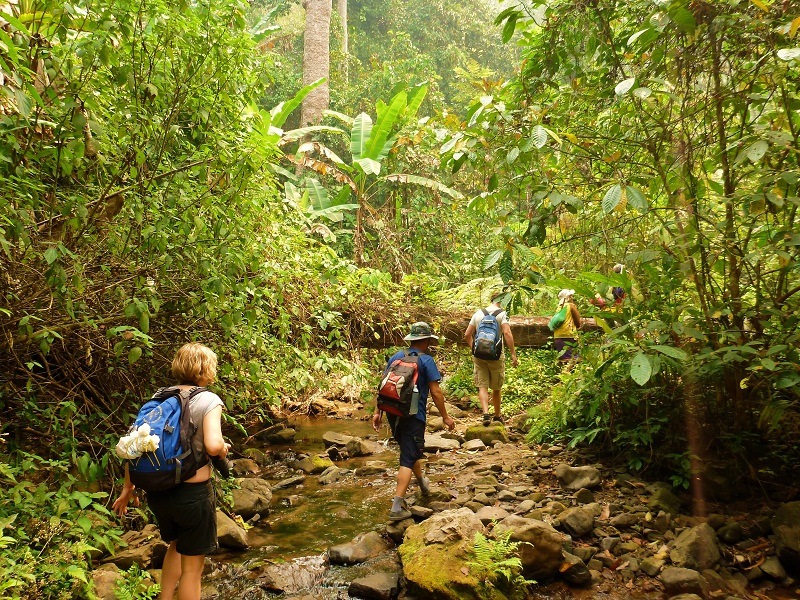 This area has firmly established itself as a major player in Laos’ ecotourism industry, primarily due to the Nam Ha Ecotourism Project, which was established in 1993 by NTA Lao and UNESCO to help preserve Luang Namtha’s cultural and environmental heritage in the Nam Ha National Protected Area. The Nam Ha NPA is one of the largest protected areas in Laos and consists of mountainous areas dissected by several rivers. It is home to at least 38 species of large mammal, including the black-cheeked crested gibbon, tiger and clouded leopard, and over 300 bird species, including the stunning Blythe’s kingfisher.

Udomxai
Heading northwest from Luang Prabang, travellers will reach Udomxai, the capital of Udomxai Province. It’s a hot and dusty town that is used as a pit-stop and a brothel stop but the local tourist board, with the help of a German NGO have done a lot to promote the area’s other attractions and numerous tours to less tourist places are now bookable. The town makes a decent stop-off point at a convenient junction; it’s one of the biggest settlements in northern Laos and has excellent facilities. One only has to look around at the presence of Chinese restaurants, hotels and shops to get a sense of the large.

Luang Namtha
Luang Namtha Province has witnessed the rise and decline of various Tai Kingdoms and now more than 35 ethnic groups reside in the province, making it the most ethnically diverse in the country. Principal minorities include Tai Lu, Tai Dam, Lanten, Hmong and Khmu. The provincial capital was obliterated during the war and the concrete structures erected since 1975 have little charm but there are a number of friendly villages in the area. As with all other minority areas it is advisable to visit villages with a local guide or endorsed tourism organization.
The Luang Namtha Museum near the Kaystone Monument, houses a collection of indigenous clothing and artefacts, agricultural- tools, weapons, textiles and a collection of Buddha images, drums and gongs.
In the centre of town is a night market with a range of popular food stalls and a handful of ethnic handicraft stands. 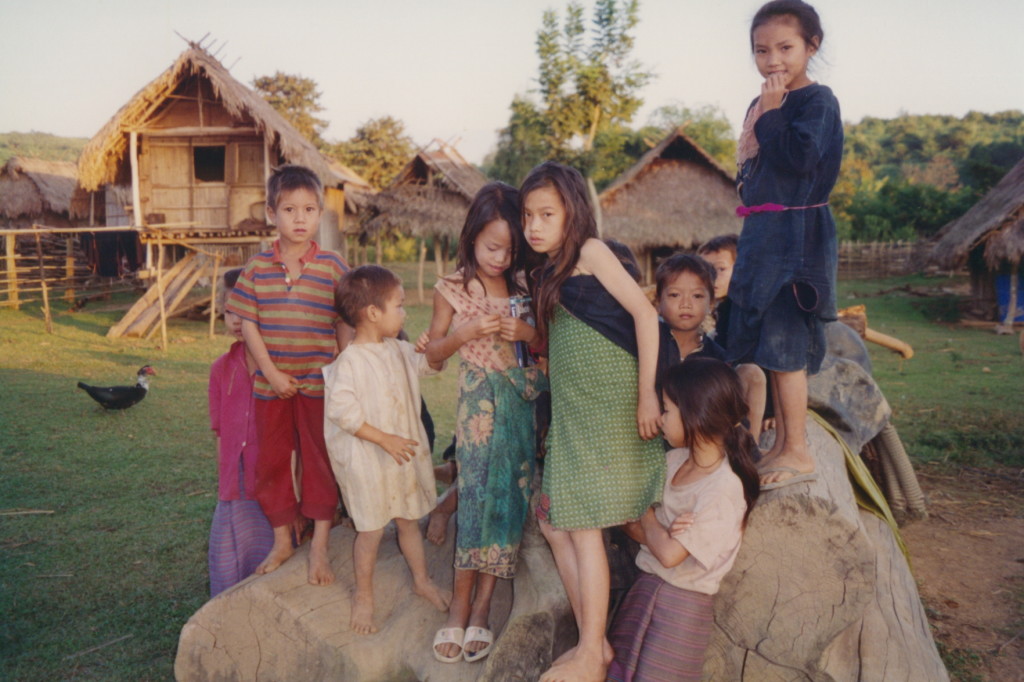 Ban Nam Chang is a Lanten village, 3 km along a footpath outside town. Ban Lak Khamay is quite a large Akha village 27 km from Luang Namtha on the road to Muang Sing. The latter features a traditional Akha entrance; if you pass through this entrance you must visit a house in the village, or you are considered an enemy. Otherwise you can simply pass to one side of the gate but don’t touch it. Other features of interest in Akha villages are the swing, located at the highest point in the village and used in the annual swing festival (you must not touch the swing), and the meeting house, where unmarried couples go to court and where newly married couples live until they have their own house. Ban Nam Dee is a small bamboo papermaking Lanten village about 6 km northeast of town. The name of the village means ‘good water’ and not surprisingly, if you continue on 1 km from Ban Nam Dee there’s a waterfall. The trip to the village is stunning, passing through verdant rice paddies dotted with huts. A motorbike rather than a bicycle will be necessary to navigate these villages and sights, as the road can be very rocky. The small Tai Lue village of Ban Khone Kam is also worth a visit. The villagers offer home stays here.
Ban Vieng Nua is a Tai Kolom village, 3 km from the centre of town, famous for its traditional house where groups can experience local dancing and a good luck bad ceremony. Contact the tourist information office to make a booking. 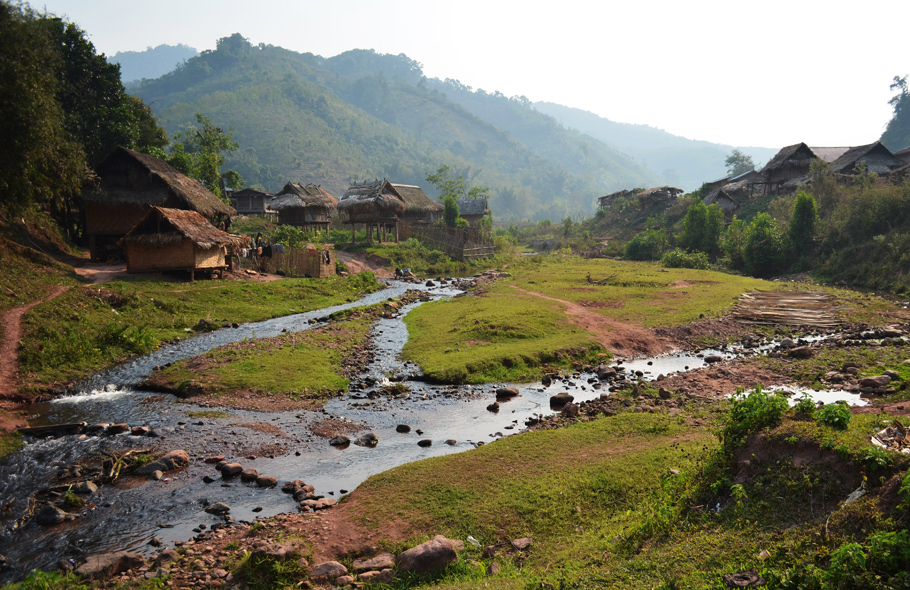 Both Luang Namtha and Vieng Phouka are great bases from which to venture into the Nam Ha National Protected Area, one of a few remaining places on earth where the rare black-cheeked gibbon can be found. If you are lucky you can hear the wonderful singing of the gibbons in the morning. See also the Gibbon Experience. The 222,400-sq-km conservation area encompasses more than 30 ethnic groups and 37 threatened mammal species. Organizations currently lead two- and three-day treks in the area for small groups of four to eight culturally sensitive travellers. Treks leave three to four times a week; check with the Luang Namtha Guide Service Unit or Vieng Phouka Eco Guide Service or Green for departure days; an information session about the trek is given at the Guide’s Office. The price will cover the cost of food, water, transportation, guides, lodging and the trekking permit. All the treks utilize local guides who have been trained to help generate income for their villages. Income for conservation purposes is also garnered from the fees for trekking permits into the area.

Muang Sing and around.
Many visitors consider this peaceful valley to be one of the highlights of the north. The only way to get to Muang Sing is by bus or pickup from Luang Namtha. The road is asphalt and the terrain on this route is mountainous with dense forest. Muang Sing itself is situated on an upland plateau among misty, blue-green peaks. The town features some interesting old wooden and brick buildings and, unlike nearby Luang Namtha and several other towns in the north, it wasn’t bombed close to oblivion during the struggle for Laos. Numerous hill peoples come to the market to trade, including Akha and Hmong tribespeople, along with Yunnanese, Tai Dam and Tai Lu.

Muang Sing Ethnic Museum in the centre of town is a beautiful building housing a range of traditional tools, ethnic clothes, jewelers, instruments, religious artifacts and household items. The building was once the royal residence of the Cao Fa (Prince), Phaya Sekong. 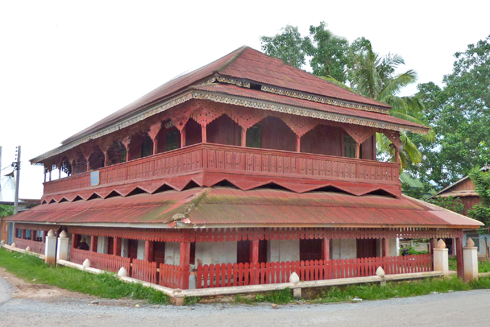 The population of the district is said to have trebled between 1992 and 1996, due to the resettlement of many minorities, either from refugee camps in Thailand or from highland areas of Laos and, as a result, it is one of the better places in northern Laos to visit ethnic villages. The town is predominantly Tai Lu but the district is 50% Akha, with a further 10%Tai Nua. The main activity for visitors is to hire bicycles and visit the villages that surround the town; several guesthouses have maps of the surrounding area and trekking is becoming increasingly popular. However, do not undertake treks independently as it undermines the government’s attempts to make tourism sustainable and minimize the impact on local villages.
From Muang Sing, trek uphill past Stupa Mountain Lodge for 7 km up an 886-m hill to reach That Xieng Tung, the most sacred site in the area. The stupa was built in 1256 and is believed to contain Buddha’s Adam’s apple. It attracts lots of pilgrims in November for the annual full moon festival. There is a small pond near the stupa, which is also believed to be very auspicious: if it dries up it is considered very bad luck for Muang Sing. It is said that the pond once dried up and the whole village had no rice and starved.

Along the Mekong
The slow boat along the Mekong between HuayXai and Luang Prabang is a favourite option for visitors travelling to and from the Thai border. It’s a charming trip through lovely scenery.
Huay Xai 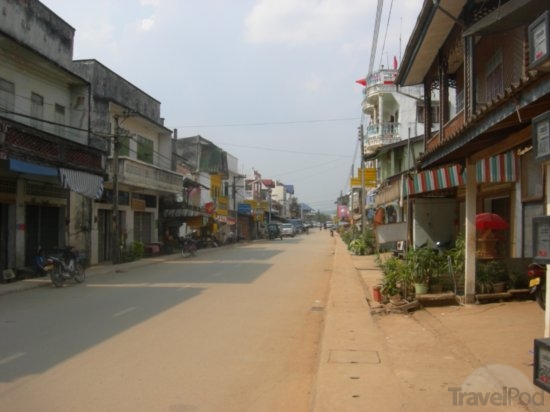 Located southwest of Luang Namtha on the banks of the Mekong, Huay Xai is a popular crossing point to and from Thailand. Few people spend more than one night in the town. Boats run between here and Luang Prabang, two days’ journey downstream, via Pak Beng. Most passengers arrive close to the centre at the passenger ferry pier. The vehicle ferry pier is 750 m further north (upstream). Although the petite, picturesque town is growing rapidly as links with Thailand intensify, it is still small and easy enough to get around on foot.

Most visitors that do stick around in Huay Xai do so to visit the Gibbon Experience. Thrilling, exciting and unmissable two and three day trips head into Bokeo Nature Reserve, where a number of tree houses have been built high up in the jungle canopy and linked by interconnected zip-lines. The whole experience varies greatly from dry to wet season. Guests need to be in reasonable condition, especially in the rainy season, when the walk in can take up to eight hours through thick mud. It sounds arduous, but it is worth it – just go prepared! Two programmes are offered, the ‘Classic’, with limited trekking; and the ‘Waterfall Experience’ which heads deeper in to the jungle and is more challenging and runs dry season only. Staying in the trees and waking to the sound of singing gibbons is a truly awe-inspiring experience, as is zip-lining high above the jungle canopy, through the mist. In the morning well-trained guides take visitors hiking to see if they can spot the elusive gibbons (a rare occurrence) as well as other plant and animal species. Others to look out for are the giant squirrel, one of the largest rodents in the world, and the Asiatic black bear, whose numbers are in decline as they are hunted for their bile and gall bladders.

First and foremost this is a very well-run conservation project. The Gibbon Experience was started to help reduce poaching, logging, slash-and-burn farming and the destruction of primary forest by working with villagers to transform the local economy by making a non-destructive living from their unique environment. Already the project has started to pay dividends: the forest conservation and canopy visits generate as much income year on year as the local logging company could do only once.