Few rides can match the magnificent scenery, colorful people and sense of adventure gained on this odyssey into Vietnam’s remote north-west. Those who take up the challenge will not be disappointed.

And it is a challenge, with numerous mountain passes and long stretches of rough, unsealed road. Accommodation is limited in places, forcing a couple of very long days. 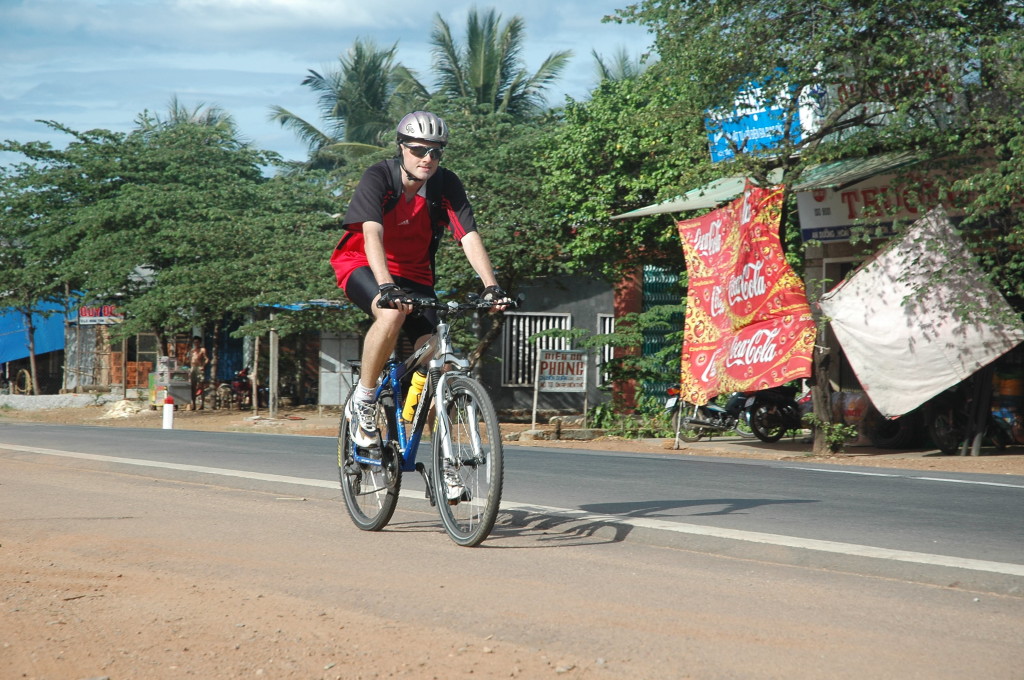 Planing
A few easier alternatives do exist. One is to ride only the first six days. The road from Hoa Binh to Dien Bien Phu is sealed and all stages are less than 90km, making it an excellent shorter and less rigorous option. The other is to have vehicle support. The north- west is popular with travelers out of Hanoi,
making it easy, and relatively cheap, to hire a jeep and driver to cart the bags and give you a lift when it all gets too hard. Visit one of Hanoi’s travel cafes on P Hang Bac to make arrangements.

When to Ride
This route contains large sections of un- sealed road that may be impassable after prolonged rain; the wettest months (June-Sept) are best avoided. If attempting the ride during this period, check road conditions before setting out. The travel cafes in Hanoi are usually a good source of up-to-date information. As the highway from Hanoi to Dien Bien Phu is sealed, it may still be possible to complete the first six days of the tour year-round.

October to mid-December and March to May are ideal times to visit, offering cool to mild temperatures and predominantly dry conditions.

Mai Chau, Hoa Binh province
Mai Chau is a popular destination for day- trippers out of Hanoi as it is one of the closest places to experience a ‘real’ Montagnard village. It’s very rural with no real town centre – rather it’s a collection of villages, farms and huts spread over a large area. It’s a beautiful area whose inhabitants are mainly ethnic White Thai, distantly related to tribes in Thailand, Laos and China. 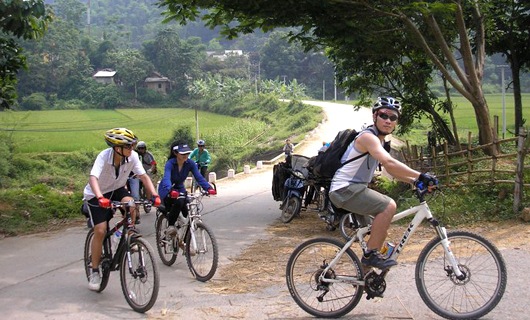 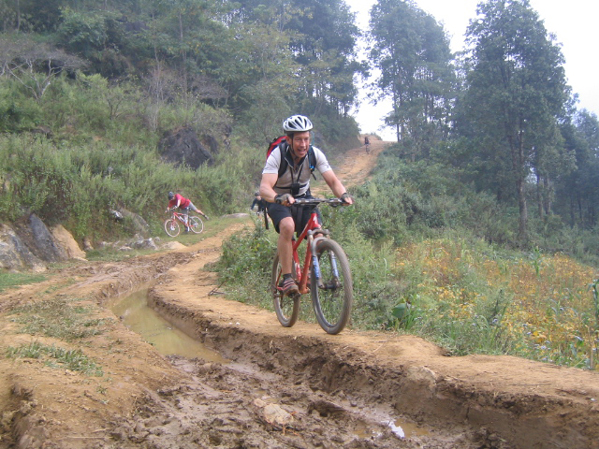 Yen Chau, Son La province
This small agricultural district is well known for its fruit. Bananas and seasonal delicacies such as its prized mangoes, longans (July & Aug) and custard apples (Aug & Sept) also thrive. Browsing the plentiful produce at the small but lively street market is a good way to while away the time. It’s also a great place to photograph the minority women, predominantly Black Thai, who congregate there; ask first to avoid offending people.

Tuan Giao
Not many bus-bound travelers stay in this remote town, but on a bike there’s little choice. Although there’s not a great deal to see or do, it offers some reasonable food and accommodation options.

Dien Bien Phu
Dien Bien Phu, capital of the Dien Bien district of Lai Chau province, is in one of the most remote parts of Vietnam. The town, 16km from the Lao border, is in the flat, heart-shaped Muong Thanh Valley. The
area is inhabited by Montagnard people, most notably the Thai and H’mong. Ethnic- Vietnamese, whom the government has been encouraging to settle in the region, currently comprise about one-third of the
Muong Thanh Valley’s population of 60,000.

Dien Bien Phu was the site of that rarest of military events – a truly decisive battle. On 6 May 1954, the day before the Geneva Conference on Indochina was set to begin half a world away, Viet Minh forces overran the beleaguered French garrison at Dien Bien Phu after a 57-day siege. French morale was shattered and the government abandoned its attempts to re-establish colonial control of Indochina.

LaiChau
This small town is nestled in a beautiful valley carved from spectacular mountains by the Da River (Song Da), but beneath Lai Chau’s beauty lies a difficult existence for locals. Far from busy trade routes, commerce is limited and the town has only been really successful in harvesting a couple of particularly valuable cash crops: opium and timber. However, opium harvesting does not find favor with the central government, which has been trying to discourage the Montagnards from producing the poppies. 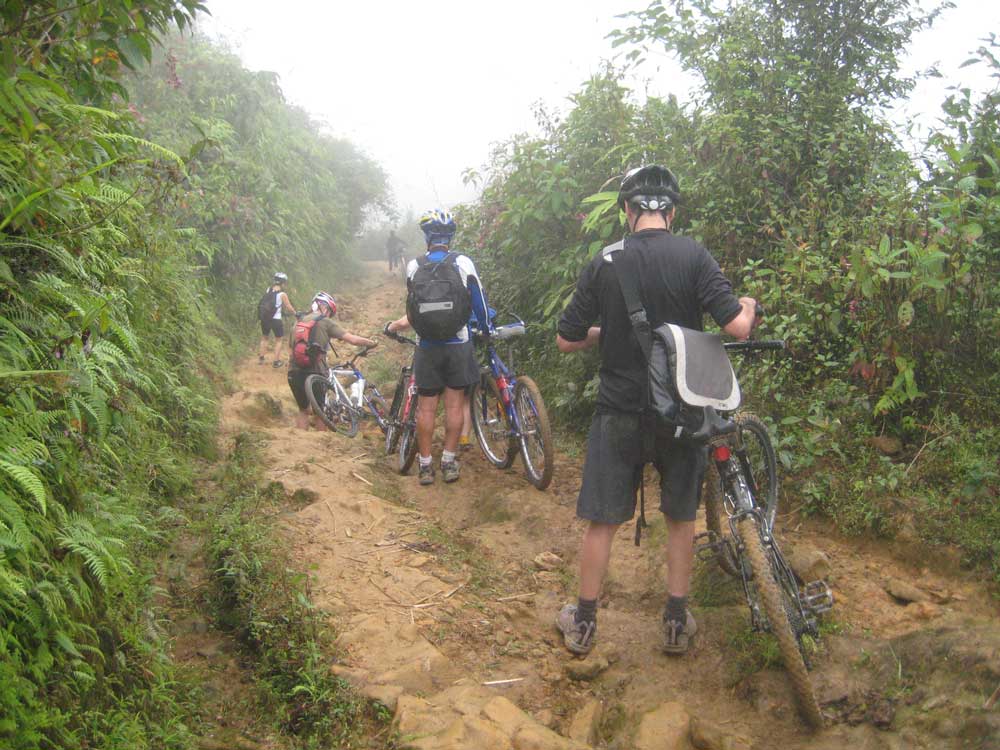 The timber industry is also doing it tough. In recent years the forest has been reduced and flooding has increased dramatically. Around 140 people lost their lives in 1990 in a devastating flood on the Da River. An even bigger flood in 1996 killed 100 people and cut all roads into town for two months. It seems that floods could become a permanent feature of Lai Chau. The government plans to place a dam in the Ta Bu area Gust above the current Song Da Reservoir, east of Lai Chau) to create the largest hydroelectric station in South-East Asia, an Endeavour that would submerge the present township.

Recognizing that the town may go the way of Atlantis, the provincial capital was transferred from Lai Chau to Dien Bien Phu in 1993. For the time being, however, you can leave the pedal-boat at home; flooding of the town won’t occur until at least 2010.

Odd as it might seem, in summer Lai Chau is one of the hottest places in Vietnam. The surrounding mountains enclose the heat from the south-east summer monsoon, which blasts in from the

Indian Ocean, and June and July temperatures can soar as high as 40°C.

Tam Duong
While the town itself is nothing special, after the hard slog from Lai Chau, Tam Duong is a welcome sight. The surrounding country- side is truly spectacular and, if time permits, it’s possible to spend a day or two here trekking to some of the surrounding minority villages inhabited by ethnic groups, including White H’mong, Flower H’mong, Black Dao, Lu, hang and Pu a. While the majority of people in Tarn Duong are Montagnards, ethnic-Vietnamese are still the largest single group.

The busy market is a great spot for people- watching.

Sapa
The premier destination of north-west Vietnam, Sapa is a hill station built in 1922. It lies in a beautiful valley close to the border with China. The whole area is spectacular, full of colorful minority peoples and frequently shrouded in mist. 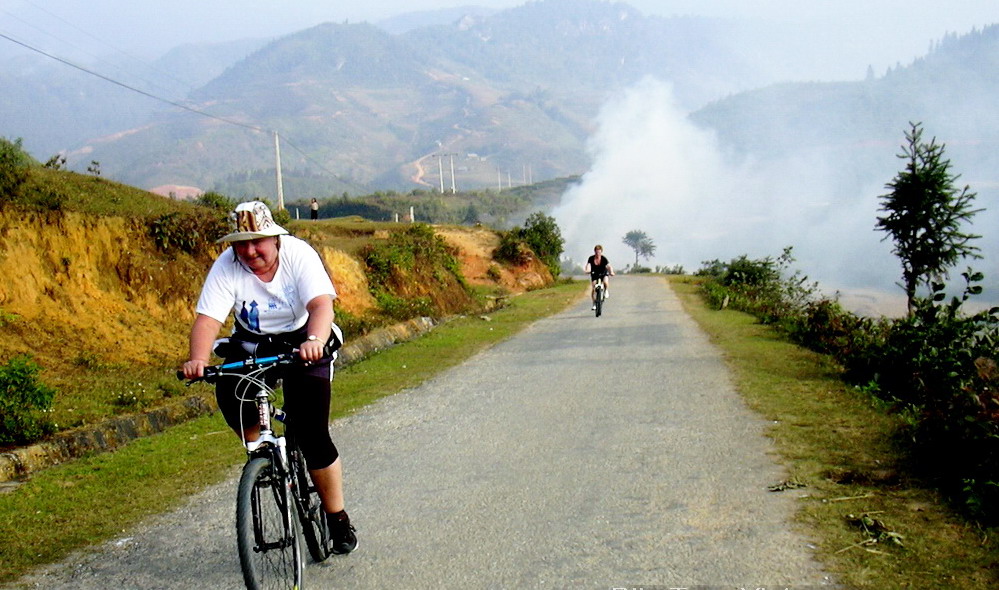 With improved transport links and Vietnam’s economic and tourism renaissance Sapa has boomed in recent years. Counties new hotels have appeared, the electricity supply is now pretty reliable and the food has improved immeasurably. The local authorities are even preparing to assign street names in the town! One inherent downside to all of this prosperity is the ‘cultural darn- age’ being suffered by the local Montagnare minorities. Indeed the effects of mast tourism are already appearing.

If you visit in the off season, don’t forge your winter woollies. In January and February it gets down to O°C, with winter also bringing fog and drizzle. The climate does have a few advantages – the area boasts temperate-zone fruit trees (peaches, plums etc) and medicinal herb gardens.

Sapa would be considerably less interesting without the H’mong and Dao people, the region’s largest and most colorful ethnic groups.

Lao Cai
Lao Cai, a border outpost facing the Chinese town of Hekou across the am Thi river, lies at the end of Vietnam’s north- west rail line. The town was razed in the Chinese invasion of 1979 so all the buildings are relatively new, but you’d hardly know it. There’s no compelling reason to stay here and few do. You’re best off making a beeline for the train station. If you’re heading overland into China, the border is 3km north of the Lao Cai train station.