To truly honor the memory of Ho Chi Minh, visitors to these sights are obliged to buy a bouquet of flowers to lay at three separate places: One at the foot of his statue in the central square in the city of Vinh, two at his birthplace, and three in the nearby village of Kim Lien, where he lived for many years. Going without flowers is, of course, okay, but foreign visitors who follow the tradition get much more respect from the Vietnamese groups. A visit to these sights is a somber one, and foreign visitors should refrain from goofing around. Docents at each site speak Vietnamese only, but some will hand you an information card printed in English. Note: Especially if you’re with Vietnamese friends or tagging along with a group, pretend you’re listening; walking away while the docent is speaking is considered rude. 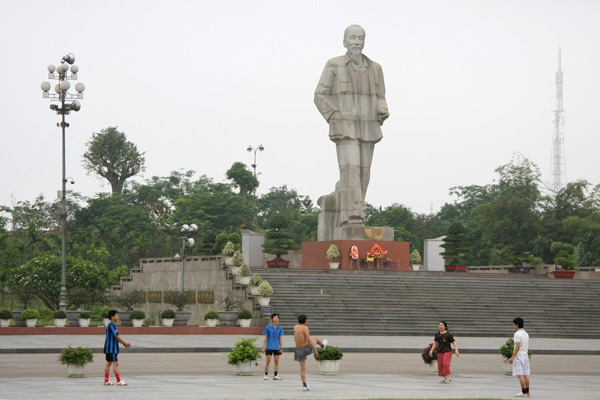 In the center of Vinh (and also adjacent to the town’s best hotel, the Phuong Dong), the massive square in front of this statue is the city’s most popular strolling ground. Western visitors are bombarded by young students eager to practice their English and who want to have their photograph taken with a bona fide Westerner (put on your best “materialistic and indulgent” grin). The massive statue of Ho at one end of the square is surrounded by a faux mountain range to depict the land of Vietnam, and Ho himself looks downright jaunty, one hand raised as he strides forward, a “revolutionary winning” grin on his bright, silver visage. The steps leading up to the statue are guarded by some surly, jack-booted soldiers who growl at anyone who goes near. The only exception is if you’ve come with a bouquet for the fallen leader and, leaving your shoes at the bottom of the steps, humbly pad to the foot of the statue and lay your wreath in obeisance (you can stop for a photo on the way down, but don’t linger or the lads will bark at you).
At the center of town in Vinh. Free admission. The park and entrance to the statue are open daily dawn dusk.

The house where Ho Chi Minh was born belonged to his paternal grandfather and lies in Hoang Tru Village. It’s a pilgrimage sight for Vietnamese tourists who come by the busload, especially on weekends and national holidays. Souvenir stalls out front sell busts of Ho, books (some good volumes in English), and bouquets of flowers for placing on the small family altar in Ho’s home. The home is the original, but the furnishings are re-creations except for the bed, which is the actual one in which Ho was born. What strikes any visitor, and is something that Vietnamese almost worship, is the rugged simplicity of these dirt-floored, thatch-wall rooms in which the country’s greatest leader sprang from obscurity to spurn a revolution. Ho’s father was involved in government, and it was in this house, as well as his second home nearby (see below), that Ho first heard the rumblings of discontent from local officials and revolutionary friends of his father. In fact, the likes of Phan Boi Chau, Phan Chu Trinh, and Phan Dinh Phung (names familiar from major city thoroughfares throughout Vietnam) graced the family hearth, and much of Ho’s passion for politics came from overhearing these conversations He was immersed in the cause of peasant revolution. Ho Chi Minh was descended from two generations of teachers, and his studious father endured much to attain the rank of mandarin. Study was therefore a focus for young Ho, too, and his desk and study area are enshrined here, almost like places of worship for Vietnamese, who are so grateful for the high ideals the man held and lived by.
Hoang Tru is 14km south of Vinh. Most visitors come by bus or car and then walk to nearby Kim Lien, Ho Chi Minh’s second place of residence during his father’s shifting career in government.
Free admission. The sights are open daily 8-11 am and 1 -5pm. 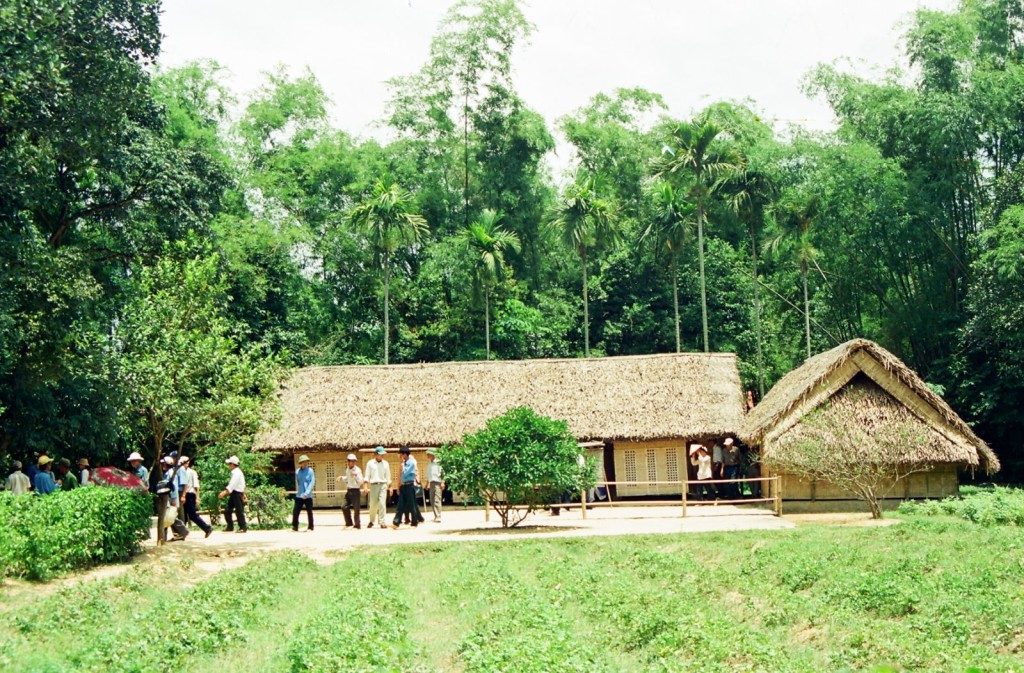 Walking here it’s just 1km from Hoang Tru, along a flat road flanking lush green rice fields is part of the experience of getting in touch with Ho the man, who, as a young teacher, walked the length of Vietnam going from job to job and searching for a purpose. His journey is chronicled in Vietnamese schools and celebrated in many “Ho Chi Minh Slept Here” sights around the country.
The village of Kim Lien features an imposing series of museums and monuments. Display areas with photos of Ho’s life and the rise of the revolution grace the walls of two buildings that flank the courtyard entry, and at the back there’s a unique building its interior decorated in red with a great golden bust of Ho Chi Minh where you’re meant to lay another bouquet of flowers. It’s all strangely like a Buddhist temple, and the vibe is a bit eerie if you’re not into worshiping false idols and such (I was with a group of Vietnamese and more or less obliged to offer flowers and make an obeisant nod to the bust, however uncomfortable I felt about it). Behind this large compound is the house where Ho Chi Minh’s father, Nguyen Sinh Sac, lived after his first appointment as a local mandarin official. The house is just as humble as the family’s first one, but here you’ll see the plaque of the mandarin hanging in Ho’s father’s office area and a more elaborate family altar. Also on the museum grounds, there are quiet lotus ponds and a large pavilion with souvenirs and books, many in English.
Free admission. The sights are open daily 8-11am and 1-5pm. 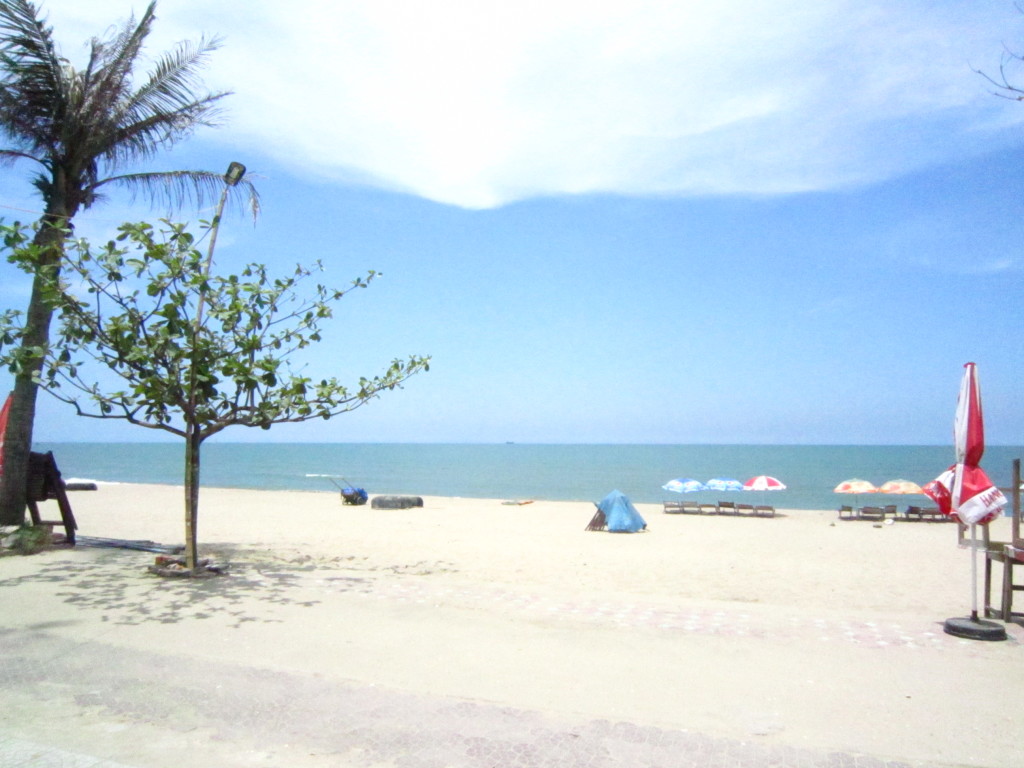 The other grand attraction in this region is Cua Lo Beach wide and wind-swept, with many services along its length that cater mostly to the Vietnamese holiday crowd (the place is packed on weekends and in the summer). You’ll find some great little seafood places on Cua Lo and a few affordable hotels. The beach is just 16km (10 miles) east and south of Vinh.
The last emperor of Vietnam, the “Playboy King” Bao Dai, had a villa here. Now, with lots of little local coffee outlets and romantic picnic areas, the beach is best for strolling (rather than swimming and lying out in the sun). It’s a nice escape; don’t expect to see other foreign tourists here. Just off the coast, you can see Hon Mat Island in the distance, and tiny Lan Chu Island can be reached on foot at low tide.
Cua Lo Beach is 16km (10 miles) southeast of Vinh. 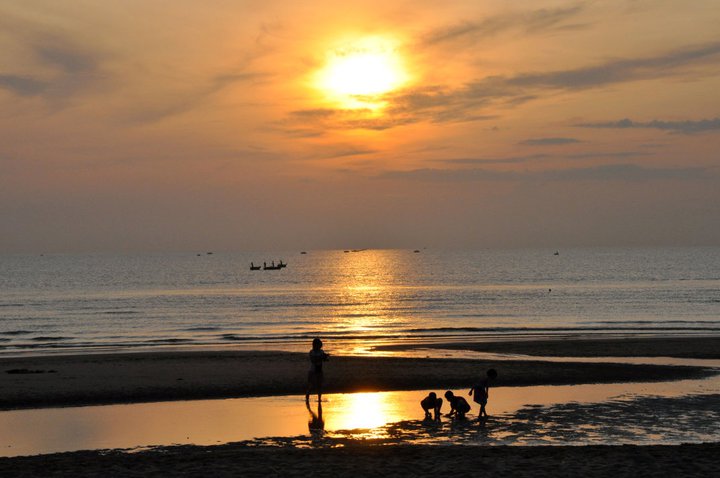 The Sun is going down on Cua Lo Beach, Nghe An province of Vietnam

Things to Do and See in Ninh Binh, Vietnam Highlights

Laos Attractions, Thing to Do and See in Laos